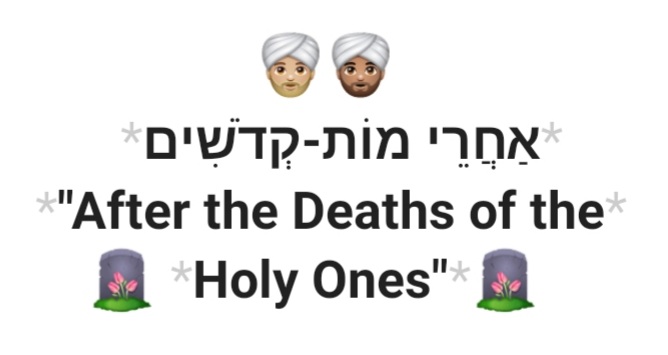 “After the Death of the Holy Ones”

For the audio version:
https://jewishpodcasts.fm/thedatabeis/13932

(For the rest of my audio content, please visit me at The DataBeis:
https://jewishpodcasts.fm/thedatabeis)

Not every Double-Parsha is made up of two titles that can be combined to communicate a cohesive message. However, “Acharei Mos-Kedoshim,” conveys both a basic, and profound one: “After the deaths of the holy ones…” Not only does this clause make sense in its own right, but it exquisitely summarizes the message of both Sidros.

With “Acharei Mos,” the Torah returns to the deaths of Nadav and Avihu as it dictates the rules and procedures for the lofty endeavor of properly approaching Hashem to engage in the Avodah She’B’Mikdash. The mention of their deaths is entirely apropos as it was exactly in such an endeavor that they made the tragic mistake which cost them their lives. Acharei Mos comes to preclude anyone else from making a similar mistake.

But, lest we mistake Nadav and Avihu for a couple of immature troublemakers, Moshe Rabbeinu already put that notion to rest on the day of their deaths even going as far as to suggest that, in a certain sense, Nadav and Avihu were on a higher level than he and their father Aharon (how so is beyond the scope of this piece). In this vein, Moshe Rabbeinu clarified that at the moment of Nadav and Avihu’s mistake, Hashem sought to teach everyone a lesson, specifically through the retribution that would be exacted against these righteous individuals, because, apparently, it is specifically through retribution of the righteous that Hashem’s Name becomes revered (Rashi to Vayikra 10:3 citing Vayikra Rabbah 12:2 citing Zevachim 115B).

One could suggest that when Hashem exacts judgment against a wicked person or even an “everyday sinner,” although an onlooker might be motivated to be more careful not to sin, since the recipient of the punishment was not on a particular high, spiritual level, the onlooker is limited in what he might learn from what he beheld. That is because one can only learn from this sinner what not to be; don’t be a murderer or an adulterer; don’t be a thief; don’t be a talker during Chazaras HaShatz; don’t be a jerk, etc. With this model, we may conclude that as long as we’re not as bad as that guy, we’re fine. But, in truth, the bar for true Yiras Hashem is set low because we cannot learn from the sinner what to be. How much can you possibly learn from the death of lowlife? If that becomes our “gold standard,” then it is fool’s gold.

This might somewhat explain an incredible phenomenon that took place in the era of the second Beis HaMikdash when the Gemara (in Daf Yomi THIS week, Yoma 9A) teaches that three hundred wealthy Kohanim corruptly bought their way into the office of Kohein Gadol and did not live out the year, but they died, many of them presumably in the Kodesh HaKadashim, failing in the Yom Kippur service. One would think that each Kohein might have learned from the death of the previous one. But, perhaps, each one made the same mistake and figured that he’d be fine “as long as he wasn’t as bad as the last guy.” None of them ever had the bar properly set for true growth in the requisite Yiras Shamayim.

However, when Hashem splits hairs with the righteous such as Nadav and Avihu, we have the opportunity to learn, not just from the mistake itself, but from all of the virtues and positive attributes of the righteous. They weren’t penalized because they were “sinners,” but because, despite their perfection in areas A, B, and C, and their precision in refining Midos X, Y, and Z, they fell short in one fine point. It is when we pay attention to those fine points that we truly grow in our reverence for Hashem.

In this vein, Nadav and Avihu were undoubtedly “Kedoshim,” or “holy ones.” And while Acharei Mos focuses on the single mistake they made, a mistake that itself might only speak to the loftiest individuals to whom entry in the Kodesh HaKadashim is relevant, it does not teach us about what we can truly learn from them as Kedoshim. Yes, it teaches us not to enter the Mikdash, but it does not teach us about how we can refine our own Midos and perfect our personal growth in Avodas Hashem. But, that is where Parshas Kedoshim comes in. Indeed, “Acharei Mos-Kedoshim,” in other words, after holy individuals pass on, we have to reflect not on just the tragic mistakes they may have made, but on all the areas they’ve excelled in. And if we take Moshe Rabbeinu at his word, these Kedoshim excelled in areas that we cannot imagine.

That said, perhaps we do not have to worry about what might happen if we enter the Mikdash. We were not summoned to go there and we probably know better not to. But, Parshas Kedoshim provides us with a whole slew of Mitzvos and areas where we can work on our Midos every single day of our lives. Shabbos, Mora Av Va’Eim (reverence for one’s parents), not taking Nekamah (revenge) or bearing a grudge, “V’Ohavta L’Rei’acha Kamocha,” and the list goes on! With  the charge of “Kedoshim Tihiyu”-“you shall be holy,” the Torah sets a bar for us to work towards. The second of our Parshiyos clarifies that we don’t have to be the Kohein Gadol in the Kodesh HaKadashim to refine our character and Yiras Shamayim, and become living Kedoshim.

May we all be Zocheh to learn from holier examples, excel in all areas of Avodas Hashem, refine our Midos and Yiras Hashem, become living Kedoshim, and Hashem’s Name should be sanctified through our successes in the greatest fashion with the coming of the Geulah in the times of Moshiach, Bimeheirah BiYomeinu! Have a Great Shabbos!