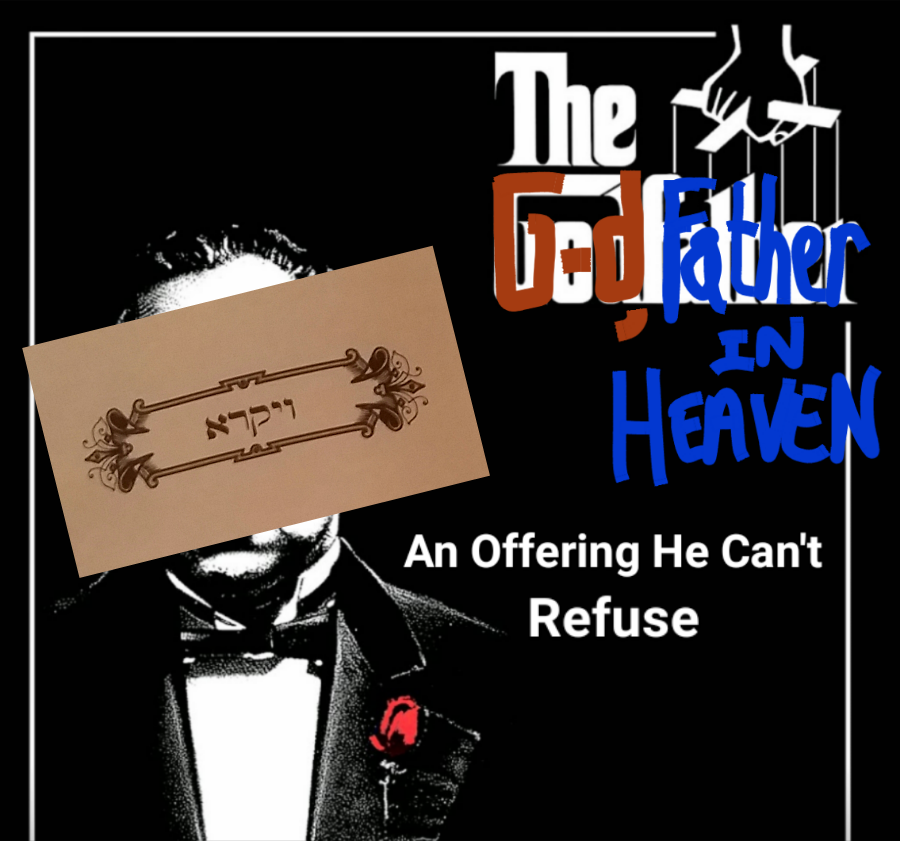 ● Why does G-d design a standard Korbanos? Where is the gift of the self? ●

“Gift of the Self – Korban Minchah”

With Sefer Vayikra’s plunge into the Avodah of the Mishkan, the first question one has to consider, at least nowadays, is how one is supposed to relate to the Korbanos. Aside from the fact that there is unfortunately is no Beis HaMikdash standing (at least as of this writing) and therefore no Temple services, the whole idea that we were even once commanded by G-d to engage in regular rituals in which we present Him our material assets in forms such as animal sacrifice is kind of strange. G-d doesn’t need anything. G-d is perfect, unlimited and He is the Owner of the entire world, lacking nothing.

“It’s really for us”

The classical explanation provided to explain this concept, an explanation provided to explain the basis of our Tefilah services and general observance of G-d’s Mitzvos overall, is that the “service” is for us more than it is for G-d, that although G-d doesn’t need it or anything for that matter, we do need it for our own good and for the good of our relationship with Him. The question is what that really means. If our services to G-d are meant for the bettering of our personal relationships with Him, then why would He have to command us to serve Him, let alone how to serve Him? Should the divine service not come from within us, from our unique, respective imaginations? Meaning, if our service to G-d reflects our personal connection to G-d, perhaps we should individually design our own ramifications for serving Him. If we’d personally initiate and designate our services to G-d in the way we choose, it would genuinely be coming from us. But, when G-d give us the commandments and particular procedures for His Korbanos and has obligated us to these services, then isn’t it coming more from Himself and not from us? Yes, we are physically going through the motions and engaging in the service, but whom are we kidding? They are not a reflection of our thoughtful and noble ideas of how to connect to Hashem. It’s not personal. On the contrary, it is an unoriginal gift. Moreover, this standardized wish list opens the floor to another couple of challenges.

Firstly, why would G-d prefer His prescribed format of service over our own personal and thoughtful ideas of serving Him? Why does Hashem not allow it to come purely from our hearts? The beauty of anyone’s services in a relationship is the thoughtfulness and personal will coming from the giver.

Regarding the Korban Minchah or the Meal offering—among the voluntary offerings enumerated in Vayikra—the Torah writes, “V’Nefesh Ki Sakriv Korban Minchah LaHashem…”-“And one [lit., oneself, alt. one’s soul] who offers a meal-offering to Hashem…”1 Now, when read by itself, this Pasuk may not seem so bizarre, but in comparison to the presentation of some of the other offerings, it stands out. For example, regarding the Korban Olah, the Elevation offering or the Burnt offering, the Torah simply stated, “…Adam Ki Yakriv MiKem Korban LaHashem…”-“…A person [man], when he brings, from among you, an offering to Hashem…”2 The simple question is why the Torah labels the one who brings the Korban Minchah differently, referring to him as “Nefesh”?

Undoubtedly, when it comes to Avodas Hashem, G-d does want and require our personal thought and investment. While G-d chooses the general structure for His Avodah, has drawn out their schematics, and has written up the technical manual to serving Him, at the end of the day, “Rachmana Liba Ba’i”-“The Merciful One wants the heart.”3 In this vein, a handful of Nevi’im have chastised the B’nei Yisrael for merely offering Korbanos or performing ritual services which were empty of heart and not backed by a true, personal devotion to Hashem. Yes, Avodas Hashem reflects our relationship with G-d and therefore does require imagination and personal will.

Then why did G-d make a specific and impersonal procedure for His service? Isn’t that kind of bland and not particularly “from the heart”? And even worse, isn’t it quite humanly for G-d to make any such preferences?

It could be that one question is actually the answer to the other. The second question is certainly a tough one; if G-d is G-d and not human, how can He express a preference? The answer might be that, indeed, G-d’s prescription is not a reflection of His “personal preference,” His personal desires—No. On the contrary, it is a reflection of a particularly simple, impersonal standard, an ordinary process that appeals equally to all people. G-d chose an “impersonal standard” so that no one will mistake G-d as a humanly being who does not have everything and therefore has unique preferences. If Korbanos and our overall services to G-d were entirely open to our individual imaginations, although it may be more personal, any one of us might falsely and arrogantly think that we have “what G-d needs” and that we can conceivably fill in what G-d lacks. We may think that he of us who gives more “assets” to G-d is giving better. But of course, G-d lacks nothing. Thus, although G-d wants our personal feelings and our heartfelt devotion to Him, He wants that aspect to be more internal, coming from a place of understanding that we can never add to Him. He wants us to realize that the offering to Him itself is essentially no different from that of the next person’s and is not any more important. The uniqueness of our particular Korban though, is not in the particular service that we provide, but merely that we ourselves, individually, are mindfully engaged in the providing of that service to Hashem. It is in that way that we add our personal flavor to these otherwise standardized services to G-d. It is that aspect that G-d truly cherishes. It is that aspect which leaves no room for arrogance, but only purity of heart.

Gift of the Self

This higher understanding of Korbanos and Avodah may help us explain the other issue we raised regarding the Korban Minchah. Why is it that the Torah uniquely referred to the one who brings a Minchah as a “Nefesh”?

Before answering this question, we have to figure out what exactly a “Nefesh” is. Today, “Nefesh” is commonly translated as “soul,” which is not so far off from the meaning of the word in most contexts in which it appears in Chumash, where it simply refers to one’s “self.” “Nefesh” is essentially one’s essence. Thus, the Torah is stating that the Minchah is one that comes apparently from one’s essence. Indeed, Rashi4 famously relates the insight of Chazal that the Korban Minchah, consisting of inexpensive flour (and not animals), is normally offered by a poor man, and that when G-d sees the poor man contributing whatever it is that he can, G-d considers it as though the person is offering his entire essence.

This modest “Minchah LaHashem,” offered properly, is a voluntary, but standardized offering that comes from the heart. We might even argue that the poor man’s offering, albeit a standard offering, is the Torah’s quintessential, genuine offering of the self!

All of the above may even help explain a difficult issue that goes back to an old narrative in Sefer Bereishis regarding the first Korban ever mentioned in the Torah which happened to have been none other than a “Minchah LaHashem.”

In the beginning of the Torah, the first Korban presented in the text, we’re told, was offered by the world’s first murderer, Kayin, and as was mentioned, it was a “Minchah LaHashem,”5 literally, a gift to Hashem. Of course, Kayin wasn’t always the world’s first murderer. Kayin murdered his brother Hevel after realizing that Hevel’s Korban was accepted by G-d while his was rejected. Now, although killing a brother is terrible, perhaps unforgivable misdeed, why would G-d have “instigated” as it were and actively incited the Kayin’s jealousy and hatred by demonstrating any preference and rejecting him like that? Moreover, Kayin initiated and brought a Korban all on his own! It was Kayin’s own idea!

Without even delving into the details of the respective materials that Kayin and Hevel offered in their personal Korbanos (which the text and Chazal do indeed compare and contrast), the fact that Kayin even reacted the way he did, attacking his brother, already reveals what was wrong with his offering. It reveals just what he misunderstood about the delicate relationship with Hashem. That Hevel’s Korban was accepted should not have been a concern to Kayin. Hevel’s Korban was a reflection of nothing more than Hevel’s personal relationship with G-d. For Kayin to be humbled by Hevel’s Korban is the opposite mentality of the modesty that we’ve associated with the Korban Minchah. As was mentioned, G-d does not need our Korbanos! One piece of food is no better than another. Those are just the simple standards. What G-d wants to see is how much of the personal self goes into that gift, which is essentially what G-d tells Kayin; “HaLo Im Teitiv S’eis…”-“Surely [lit., “is it no so that…’], if you [personally] do well [for yourself], you’ll be uplifted…”6 It is not a competition between individuals, not a function of how much “stuff” one offers G-d, but the thought that comes from the individual. A rejected Korban thus reflects one’s own lacking in self-sacrifice. The contrast with others which one perceives is purely psychological, and only exists in the first place because of one’s own failure to offer his personal best.

Kayin’s problem was that he made the very mistake that was mentioned earlier; he thought that he, with his own imagination, could decide the ramifications of his service to G-d, suggesting that G-d might actually need something of his, that he would be the master-provider. Thus, Kayin’s “Minchah LaHashem” was fundamentally lacking as he was merely giving G-d material possessions which G-d didn’t actually need, instead of humbly giving himself over to G-d.

An Offering He Can’t Refuse

Coming full circle, when Hashem lays out the rubric for His Avodah, for the Korbanos, He is careful to determine a basic, feasible standard, to circumvent the tragic mistake of Kayin and to teach that it is not the object of the offering that G-d values intrinsically—indeed, even the poor man can volunteer his two cents and G-d will accept it with open arms! Rather, it is the personal soul inside that offering, the gift of the self that G-d seeks from us.

May we all be Zocheh to truly and humbly give over ourselves to Hashem’s Avodah, and may our services be accepted favorably by Hashem—demonstrated by His deliverance of the ultimate Geulah and the coming of Moshiach, Bimheirah Biyomeinu! Have a Great Shabbos!