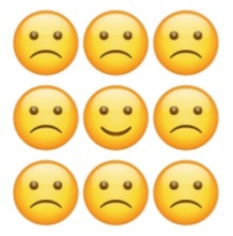 I wrote this short D’var Torah for a group of NCSYers a few years ago and its magical message has not lost its relevance. I only edited it slightly…

If one looks at all of the stories in Sefer Bamidbar, one will notice that they make up a long series of unfortunate events for the B’nei Yisrael in the desert. We hear stories of a nation who sins, rebels, suffers tragedies, and betrays Hashem and His Torah way on multiple occasions. This tragic series begins in our Parsha, B’Ha’alosecha. The first, explicit, national tragedy recorded begins with three simple words. “Vayehi HaAm K’Mis’onenim…“-“And the nation became as complainers…” [Bamidbar 11:1].

The Torah indicates that the people were complaining. And guess what they were complaining about! Your guess is as good as mine, because the Torah doesn’t divulge what exactly it was that warranted it! Why not?

And what does it mean when the Torah says that “the nation became as complainers…”? Should it not have just stated, “And the nation complained”?

This scene is the one that apparently snowballed into the unfortunate series which cost virtually the entire generation its right of entry into Hashem’s Promised Land. And once again, we’re informed about complaining and complainers, but not about any specific complaint. This is telling. And what it tells us is that our attitude matters, that attitude is everything!

The Torah didn’t tell us WHAT they were complaining about because that was not the real problem, or at least it no longer mattered. It was not by any means greater than the new problem they had caused.

If we can adopt a positive outlook on life, we can be as happy as we all truly want to be. Whatever is going on in life, we have to remember: Attitude is everything!

May we all be Zocheh to develop the right attitude, affect positive change where available with productive behavior, and bear with Hashem where it seems we can’t, and Hashem will not only bear with us, but He will deliver us from all of our frustrations and hardships and send us our Geulah with the coming of Moshiach, Bimheirah Biyomeinu! Have a Great Shabbos!