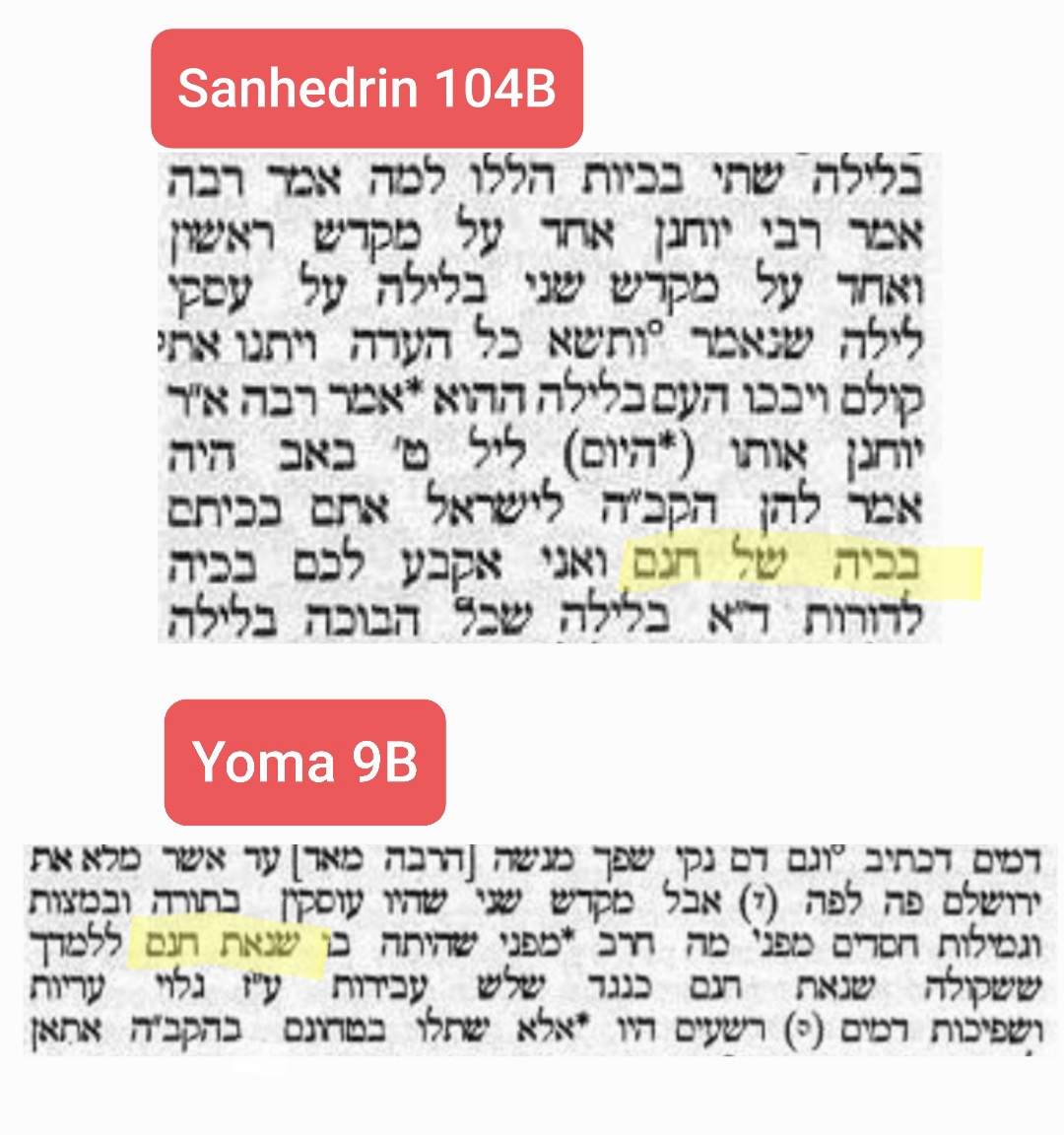 However, the tragedy did not merely coincide with Tish’ah B’Av, but, more precisely, it was the origin of every Tish’ah B’Av. In this vein Chazal taught that because the nation responded to the report of the spies with a “Bechiyah Shel Chinam,” literally, a cry of nothing, Hashem would forever give the people reasons to cry for generations to come.1 This “Bechiyah Shel Chinam” is one of the most famous “causes” of Tish’ah B’Av.

Interestingly, in the other most famous “cause” for Tish’ah B’Av, we find a similar, but vague phrase: “Sinas Chinam,” classically translated as “baseless crying.” Chazal inform us as well that Churban Bayis Sheini (Destruction of the Second Temple) was due to this supposed “Sinas Chinam.”2 The allegation is a strange one because who actually hates another person with zero basis at all? Most people don’t harbor ill feelings for a person for no reason at all; usually, there is some basis. One would have to be a sociopath to hate someone baselessly. Could “baseless hatred” possibly be the national sin and cause of Tish’ah B’Av?

While we ponder the above, it is fascinating to consider the point we hinted to in passing, that both of the aforementioned “causes” of Tish’ah B’Av contain this odd modifier of “Chinam.” Is there perhaps a connection between the “Bechiyah Shel Chinam” and “Sinas Chinam”? The starting point to an answer would be to better understand what “Chinam” means. Indeed, when we consider the common meaning of the word, both of these “causes” for Tish’ah B’Av need to be qualified.

Not only is it strange to suggest that Am Yisrael is a nation of sociopaths, but it is also strange to suggest that the response to the report of the Miraglim was a “baseless cry.” Surely, the people had a basis for their cries. They were frightened to engage in a war with a mighty people. Granted, they should have had more trust in G-d and devotion to His will, but was their cry the crime? Was their cry baseless?

The popular English translation for the word “Chinam” is not only misleading and possibly inaccurate, but it is actually ironically itself, a perfect example of something that is “Chinam,” as per the word’s actual translation. What do I mean?

Most accurately, the word “Chinam” actually means “for free” or “for no cost.” Indeed, the other most well-known usage of the word appears in the context of Halachic custodianship; the “Shomer Chinam” is the “unpaid watchman” or “unpaid custodian.” He does his peer a favor with no gain, or to no end that is immediately productive for himself. We certainly would not say that his favor is baseless. There may be a good reason for his commitment to custodianship. He may be rewarded in the next world. But, he does not receive pay or “gain” in the conventional sense. Thus, “Chinam” means “to no purposeful end.”

In this vein, to almost coarsely translate “Chinam” as “baseless” actually has no purposeful or productive end because such an imprecise misread does not help us understand the true causes of Tish’ah B’Av. But, with this more precise translation, perhaps we can understand those causes.

Chazal did not mean to accuse Klal Yisrael of “baseless crying” or “baseless hatred,” but rather, a cry to no purposeful end, and hatred or even dislike of others to no purposeful end. Is there any cause or basis for the crying and hating? Of course, there is. But, to what productive end do we complain about the things that we do? To what purposeful end to we harbor ill feelings towards the people that we do?

There are many real life reasons to cry. How many of those real life reasons are the reasons why we cry? There are injustices in the world that need to be addressed, of course. But incessant complaining and bemoaning has no productive end.

Similarly, there are reasons to hate some people; there are evil people out there who commit evil crimes which we should hate. We have a Mitzvah to hate Amaleik, for example. But, how much of the hate which we harbor is reserved for those terrible people? How much of those feelings of hate are solely based on the crimes committed? How many of the people that we hate are actually decent people, but our own hate has caused us to see them as genuinely evil or hate-worthy? And once again and most importantly, to what productive end do we harbor ill feelings towards the people that we do? Is there a possible gain to our hate?

The common denominator between the “Bechiyah Shel Chinam” & “Sinas Chinam” is that each one is marked by a possibly understandable negative feeling, but which is gain-lessly exacerbated due to our own lack of patience, perspective, and emotional self-control. There are reasons to cry and reasons to hate. But, why do we cry and why do we hate? When do we cry and whom do we hate? How much of our cries and hate have a productive and purposeful end?

To combat these “causes” of national tragedy, one has to look into himself and actually work on self-control. One has to become more patient with life and with other people and be open to perspective. One has to have foresight and consider the end. What will be the end to the emotions and sentiments that I think are justified and am about to express publicly? Will I be a better person because of them? Will I make the world a better or worse place through them?

May we all be Zocheh to first cry and hate for only the right reasons and to the right end, and then and Hashem should answer our sincerest, purposeful cries and emotions by bringing us to that most desired end—the rebuilding of the Beis HaMikdash, the return to His Holy Land, and the arrival of the Geulah in the times of Moshiach, Bimheirah Biyomeinu! Have a Great & Meaningful Shabbos Chazon/Tish’ah B’Av!