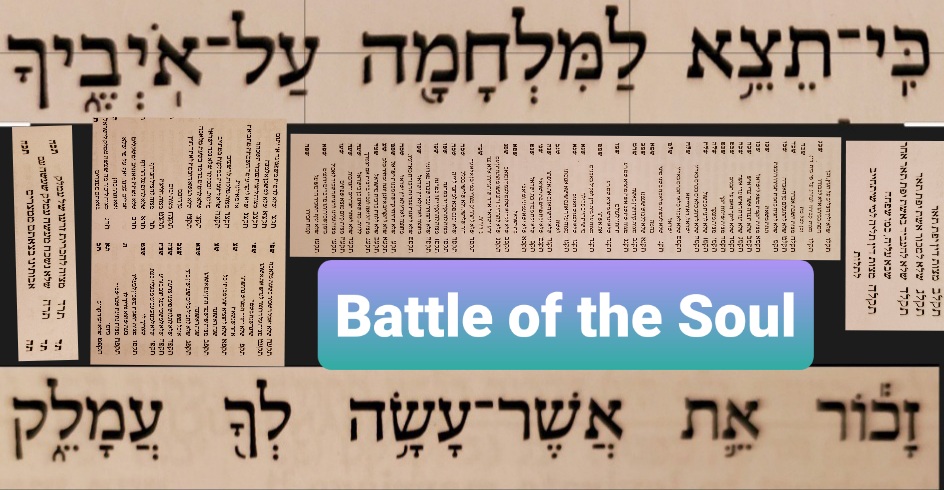 “Battle of the Soul”

Parshas Ki Seitzei contains the most Mitzvos of any Parsha in the Torah. The Mitzvah topic to begin the exhaustive list is that of Yefas To’ar—how an Israelite solider must conduct himself when tending to the physically attractive war captive.

Now although Ki Seitzei apparently begins this list of many different kinds of Mitzvos spanning many different topics and areas of life, the first section which tends to the topic of Yefas To’ar appears to be a continuation of sorts of the concluding topics of Parshas Shoftim which mostly also pertain to war.

Indeed, although Parshas Shoftim’s final passage described the rite of Eglah Arufah, a non-war related topic, Shoftim had still begun a series of laws pertaining to war, opening with the words, “Ki Seitzei LaMilchamah Al Oyivecha…”-“When you go out to war against your enemies...”1 Parshas Ki Seitzei apparently returns to the topic of war, opening with the same exact words, “Ki Seitzei LaMilchamah Al Oyivecha…”2

Considering this apparent return to the topic of war, one has to wonder: Why are there two different sections for these war-related laws? The Torah could have placed the entire “war series” in a single Sidrah. Had it done so, the Torah would not have had to introduce the topic of Yefas To’ar with the words “Ki Seitzei LaMilchamah Al Oyivecha…” because the same topic would have been included under the similar heading in Shoftim. Arranged as it is though, the Torah had to reintroduce the setting of war. The question is why Parshas Ki Seitzei and its topic begin where they do. Why are there two different segments for the Torah’s “war series”?

From the topic of Yefas To’ar, the Torah would branch out to discuss many other Mitzvos pertaining to many other areas of life, such as homemaking, marriage, civil law, etc. But then, after listing over seventy Mitzvos, the Torah seemingly returns to the topic of war once again with Parshas Zachor which describes the Milchemes Amaleik or the war against the nation of Amaleik.3

The question here is similar to the previous one. Why exactly are we only returning to the war topic here and now? Why did the Torah break away from the topic of war in the first place? The Torah had been discussing war previously, and at that point would have been the perfect place to address the war against Amaleik. In fact, the seemingly parallel command to wipe out the seven Cana’ani nations appeared earlier in the “war series” that was laid out in Parshas Shoftim.4 And even if, for some reason, the Torah wanted the war topic of Ki Seitzei to begin a new section, why would the Torah then veer off to discuss a plethora of other unrelated topics, only to come back to the topic of war again for the very last Mitzvah of the Parsha?

There is a subtle difference between the war topics of Parshas Shoftim and the one found beginning of Parshas Ki Seitzei. If one looks closely, the war topics of Shoftim are all about the proper conduct for the war itself. However, the topic of Yefas To’ar is a somewhat isolated topic which is mainly relevant at the end of the war and afterward. Indeed, it is when the Yefas To’ar is found “BaShivyah”-“among the captivity” and the soldier desires her that the Torah describes how he is to tend to those desires and inclinations. It has much less to do with the way one is to conduct himself on the battlefield in the physical war.

If, indeed, the war topic of Yefas To’ar is primarily instructing us on our way out of the physical battle, it would make sense why the Torah would shift gears and discuss broader laws such as the domestic laws pertaining to family and the building of a home. Once the war is over, the land has been conquered, and we begin to build homes on the newly occupied soil, all of these laws become relevant. Whom may one marry and whom not? What are the rules for firstborn rights when there are multiple wives? What is the proper way to build a house? What is the proper way to build a society? How should one conduct himself in his business affairs? All of these laws of everyday life meet us immediately as we exit the battlefield and return to relative normalcy.

“When you go out to war against your enemies…”

But if the law of Yefas To’ar is truly escorting us off the battlefield and into everyday life, then why would the Torah begin this law under the heading of “Ki Seitzei LaMilchamah Al Oyivecha…”-“When you go out to war against your enemies...”? According to our logic, the Torah should have set the stage in the reverse, “when you return home from war.”

And yet, there is one more pressing question that we have yet to answer, and that is the one about the apparent return to war with the Milchemes Amaleik that is featured at the end of Ki Seitzei. If we have truly exited the battlefield, why is the Torah still discussing a war with Amaleik?

R’ Yosef Ber Soloveitchik famously cited his father R’ Moshe Soloveitchik who thoroughly explained, with mastery, how Rambam clearly differentiated between two different wars and, possibly, between two different forms of Amaleik.5 The war against the Cana’ani nations, for example, is a physical battle against those nations, limited specifically to those nations. However, when it comes to the Milchemes Amaleik, there is both a physical or biological nation of Amaleik and an ideological Amaleik. This second form of Amaleik, he elaborated, was personified by the Nazis who embodied pure, anti-Semitic evil.

Assuming this model, the war against Amaleik, though it certainly overlaps with the “war series” of Shoftim, is altogether a different war. It is a war of ideologies, a battle of the soul. In this vein, the eradication of this evil incarnate—the single goal of the Milchemes Amaleik—is really just an expansion of our perpetual Milchemes HaYeitzer, the battle against the Evil Inclination inside of us. Indeed, this war is a battle against all evil. The Milchemes HaYeitzer battle takes place even off of the battlefield.

This larger, ideological battle of the soul would explain why the topic of Yefas To’ar maintains the heading of “When you go out to war against your enemies…”—because, indeed, this battle against the Evil Inclination is still in full force, even when one is on his way home from the physical war zone.

It would also explain why, under the same umbrella, we find the domestic and societal laws, topics from family life and social dynamics to even business ethics. It is because the Milchemes HaYeitzer is ever present, no less at home nor any less at the workplace.

And yes, it would also explain why the Milchemes Amaleik only surfaces at the end of Sidrah. As we have been explaining thus far, there is this second segment of the “war series,” and it is apparently contained within the confines and bookends of Parshas Ki Seitzei and Parshas Zachor. This second segment of war features an ideological and spiritual war that permeates all of our life affairs. This Milchemes Amaleik and Milchemes HaYeitzer is the battle that confronts us at each Mitzvah. It is the very battle of life, the battle of the soul.

May we all be Zocheh to successfully engage in every battle against the evil within us and without, and Hashem should grant us the ultimate victory with the coming of the Geulah in the times of Moshiach, Bimheirah BiYomeinu! Have a Great Shabbos!