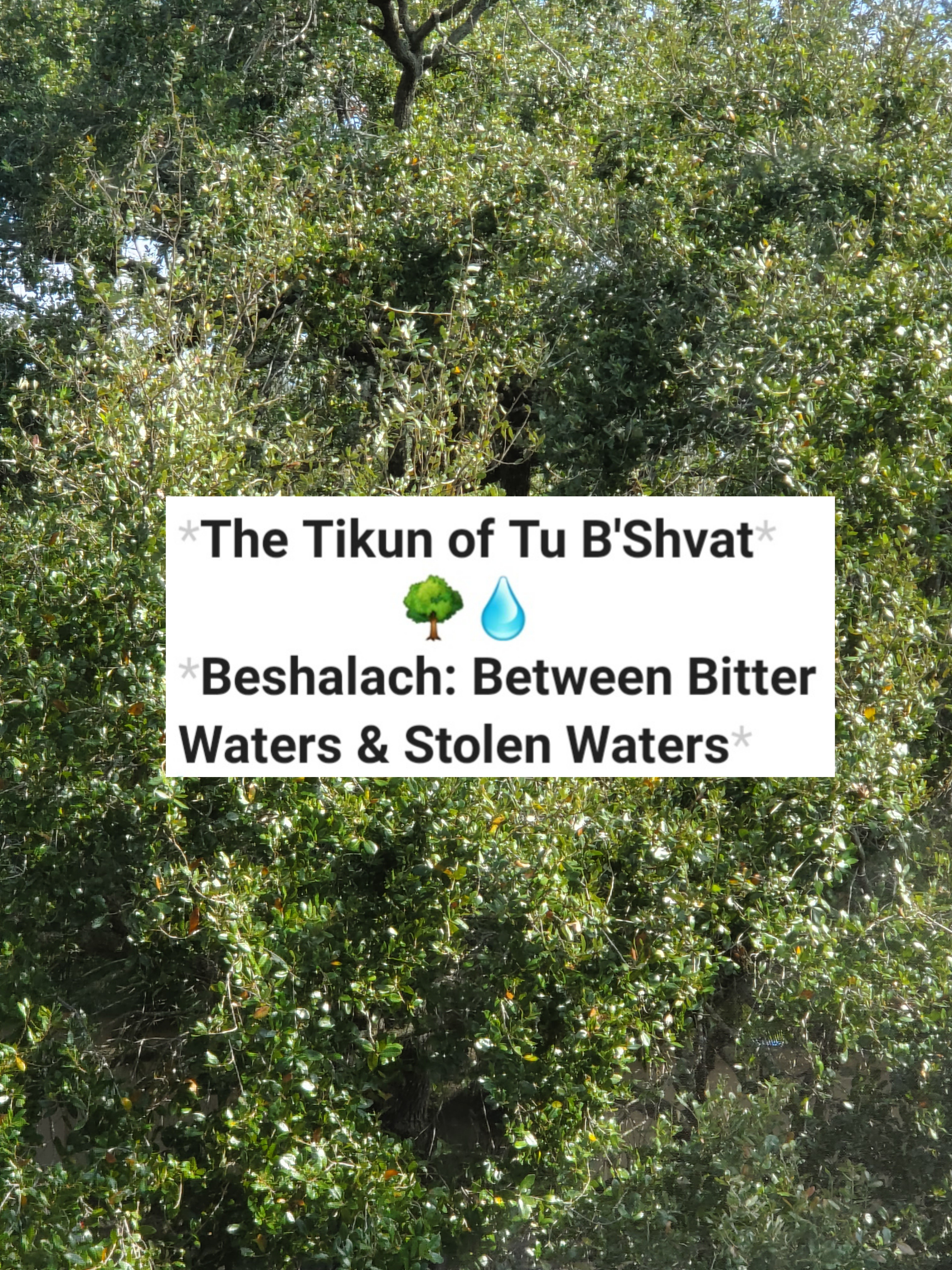 -It should also be a Z’chus for an Aliyah of the holy Neshamos of Dovid Avraham Ben Chiya Kehas—R’ Dovid Winiarz ZT”L, Miriam Liba Bas Aharon—Rebbetzin Weiss A”H, as well as the Neshamos of those whose lives were taken in terror attacks (Hashem Yikom Damam), and a Z’chus for success for Tzaha”l as well as the rest of Am Yisrael, in Eretz Yisrael and in the Galus.

“The Tikun of Tu B’Shvat: Between Bitter Waters & Stolen Waters”

One of the often overlooked stories in Beshalach is the scene at Marah, where the B’nei Yisrael encounter bitter, undrinkable waters.

In response to the complaints of the nation, Hashem commands Moshe to cast a bitter tree into the bitter waters and miraculously sweeten the waters.

Obviously, it is paradoxical that the fusion of bitter and bitter produced sweetness. Hence, it was a miracle. And as fascinating as it is, what exactly is the message of this miracle?

The Tikun of Tu B’Shvat

Swinging from one tree to the next, “Tu B’Shvat Higiya,” we have officially reached the Rosh HaShanah of Trees (as it is referred to in Rosh HaShanah 2A). Now, although, ostensibly, Tu B’Shvat is merely a legal cut-off point for fruit tithes and other related laws, the students of Kabbalah have revealed many secrets to this day. Among them, R’ Tzadok HaKohein and R’ Chaim Vital in the name of Arizal among others are cited as suggesting that the consumption of various fruit on Tu B’Shvat can actually serve as a Tikun or spiritual rectification of the sin of Adam HaRishon in Gan Eden. The question is what the nature of this Tikun is. Is it just a connection between trees and trees, fruit and fruit?

The Lubavitcher Rebbe observed that, among all Seven Species for which Israel is praised, the “Peiros” or fruits were given to us, not for their “Mezonos”-“sustenance” (like wheat and barley) but for their “Mesikus” or “sweetness.” We might think of them as a “simple luxury.” On the one hand, they are natural and easily accessible. But, on the other hand, they are extra, a natural dessert, Hashem’s gift to man.

Indeed, “sweetness” didn’t have to exist. There could have just been the bare necessities. We could have been left to fulfill all of life’s otherwise bland obligations. But, Hashem also allowed us the opportunity to taste “sweetness” in these endeavors. But, we take “sweetness” for granted. And when we don’t appreciate Hashem’s gifts, sometimes we look for sweetness elsewhere, sometimes in forbidden territory. This was the first sin of mankind. Given all of the fruit trees of the world, including the Tree of Life, yet mankind was convinced by the Primordial Serpent that the sweetness he really wanted can only be found on the Tree of Knowledge that was not permitted to them.

Now, was the Serpent wrong? The Pasuk states, “Mayim Genuvim Yimtaku…”-“Stolen waters are sweet…” [Mishlei 9:17]. But, what makes them sweeter? Our mindset. Our mind plays tricks on us to convince us that that which we cannot have will be sweeter. How do we overcome the mind games of the Serpent?

The Source of Sweetness

Simply put, it is that although we observe that sweetness derives somewhere from in the natural world, the truth is that sweetness derives from the good will of Hashem. It only exists because Hashem treated us to it. If that’s true, any sweetness that does not derive from His will is a decoy of the Serpent. Indeed, if it is Hashem’s will, you will even find sweetness miraculously in the land of bitter waters; one need not resort to stolen waters.

Hashem put sweetness into the design of Creation because He wanted us to enjoy and appreciate His gift. He placed one tree of limits so that we would remember the source of the sweetness, that it was His good will gift to us. And if we truly appreciate His will, we will obey His will. Even if it tastes bitter at first, Hashem will enable us to miraculously develop the taste and experience the true sweetness of His will.

May we all be Zocheh to not only taste the sweetness of Hashem’s world and will, but the ultimate sweetness of redemption with the coming of Moshiach, Bimheirah BiYomeinu! Have a Great Tu B’Shvat & Shabbos Shirah!
-Yehoshua Shmuel Eisenberg