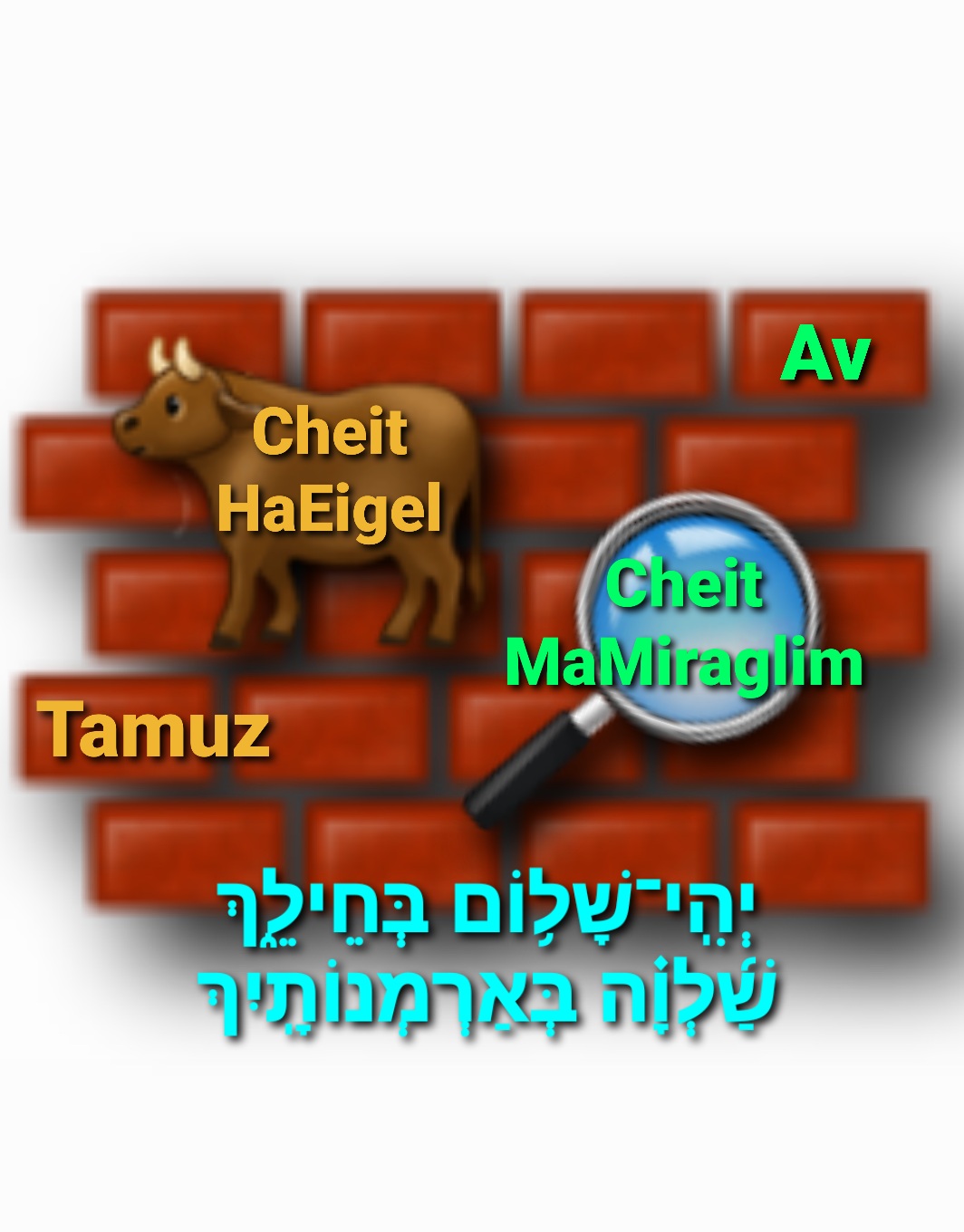 This Shabbos, Shabbos Mevarchim Tamuz, coincides with Parshas Shelach. While Tamuz is most known for the fast of Shivah Asar B’Tamuz which we observe in memory of the shattering of the Luchos in the fallout of the tragic Cheit HaEigel, Shelach is most known for the tragedy of the Cheit HaMiraglim which, we are taught, took place on Tish’ah B’Av.

These two sins are perhaps the greatest national sins in the history of Klal Yisrael, at the very least, the greatest sins of the Dor Dei’ah (the generation of the Midbar, lit., the “Knowing/Informed Generation”). But, that’s not all they have in common. While there may reasonably be many connections between them, an integral one emerges from a simple observation by Rashi in Parshas Shelach [Bamidbar 14:33].

Rashi comments on the decree of “forty years” of wandering in the wilderness which Hashem decreed against the B’nei Yisrael. This sentence was ostensibly a response and consequence to the Cheit HaMiraglim. However, Rashi just indicates that really, there were only thirty-nine new years added to their wandering. The first of the total forty had already begun and was already being calculated from the time of none other than the Cheit HaEigel. In fact, when the B’nei Yisrael had committed the Cheit HaEigel, Hashem had already “considered” issuing this decree of forty-year wandering, however, He waited until their measure of guilt had filled before doing so. Now, after the Cheit HaMiraglim, it had. Apparently, the seeds for the forty-year exile were planted earlier than Parshas Shelach. The Cheit HaMiraglim and its long-term effects were apparently an expansion, of sorts, of the Cheit HaEigel.

Now, if we consider the other major tragedies of the 17th of Tamuz and the 9th of Av, the same pattern is present. On Shivah Asar B’Tamuz, the walls of Yerushalayim were breached. And on Tish’ah B’Av, the Beis HaMikdash was destroyed. And what is the destruction if not a natural follow-up to the breach of the city walls? Without the breach, there would have been no destruction. The destruction is just the actualization and fruition of a strategy well underway once the protective blockade has been removed. The breach of Shivah Asar B’Tamuz led directly to the destruction of Tish’ah B’Av.

Considering the apparent association between these two calendar dates, what is the proper mindset and course of action for us as we anticipate their arrival? What kind of strategy would the fore-knowledge of the 17th of Tamuz and the 9th of Av warrant?

Returning to the two tragic sins in the wilderness, if we think about it, the Cheit HaEigel and Cheit HaMiraglim both represent a complete about-face to the will of Hashem. Now, at first glance, we might quickly differentiate between the nature of the two sins. After all, many of the perpetrators of the pseudo-idolatrous Cheit HaEigel actually intended to serve Hashem, albeit in a plainly inappropriate fashion. Of course, none of them intended to reject Hashem or His master plan. Even in their perpetration of the Cheit HaEigel, in some fashion, they acknowledged with enthusiasm that it was Hashem, in some fashion, Who had brought them forth from Egypt. Of course, they didn’t want to return there. Indeed, they all wanted to eventually follow Hashem to the Holy and Promised Land, Eretz Yisrael, to serve Him there.  Surely, none of them had ever dreamed of rejecting Hashem wholesale and turning back on this grand mission.

And yet, at the Cheit HaMiraglim, that is what they had not only proven themselves capable of doing, but it is essentially what they had done. How could they have ever done such a thing? Where did the brazenness for such an utter rejection of Hashem’s coveted gift to them come from? Where did this capacity to completely turn away from Hashem creep up from? Where were the seeds of the Cheit HaMiraglim planted?

The answer is: The Cheit HaEigel. Regardless of their long-term intentions, this first major tragedy was indeed a first of many that led to the perhaps larger and more consequential Cheit HaMiraglim. And until this first tragedy, the B’nei Yisrael were doing well and were on their way to immediate redemption. According to tradition, we had reached the level of Adam HaRishon, pre-sin… until this one sin breached the walls and hindered our fortification against the Evil Inclination. Once, as a nation, we enabled ourselves to turn away from, violate, and reject the instructions and will of G-d, again, regardless of our “better” intentions, we planted the seeds for a full scale rejection of Hashem’s larger will and plan. That is because a violation of Hashem’s will is a violation of Hashem’s will. Even if we were able to pick up the scraps from the Eigel and build a Mishkan in the wilderness, the walls were already breached so that our wherewithal to reject the will of G-d had already been kindled. And when their is a breach, destruction is naturally around the corner. If we are able to watch the Luchos, representative of Hashem’s will, be shattered before our very eyes, we could learn to stomach the full rejection of Hashem and turn back towards Egypt.

Perhaps we ourselves could never imagine ourselves rejecting Eretz Yisrael and giving up on our hopes for the eventual Geulah and the rebuilding of the Beis HaMikdash. But, how many of us can honestly say that we could never imagine ourselves violating the will of G-d? How many of us can genuinely say that we haven’t tweaked the will of Hashem to fit our own agenda and rationalize our sins away? Of course, we all want redemption. But, how much does the affront to Hashem’s will as described by His Torah and transmitted by the Chachamim and Poskim disturb us? They are the walls. And our breach of those walls leads to destruction. If it that doesn’t disturb us, maybe we have to reevaluate what it means to want redemption. Maybe we don’t want it. Maybe, our emotional conviction is no better than that of the B’nei Yisrael at the times of the Miraglim.

The Eigel naturally leads to the Miraglim. Breach naturally leads to destruction. If we choose to beware the breach, we can diffuse destruction. And that is the Avodah of these times: To not let our guard down, but to fortify and protect the Ratzon Hashem, not our own bogus permutations of it, but the authentic Ratzon Hashem. Do not let the Luchos fall to the ground as we yearn for the return to the Promised Land.

We should be Zocheh to keep our guard up against every manifestation of the Yeitzer HaRa and remain fortified. We should be Zocheh to protect the Torah and thereby witness peace in the walls of Yerushalayim, serenity in its palaces, and ultimately, the rebuilding of the Beis HaMikdash, Bimheirah BiYomeinu! Have a Great Shabbos Mevarchim Tamuz!