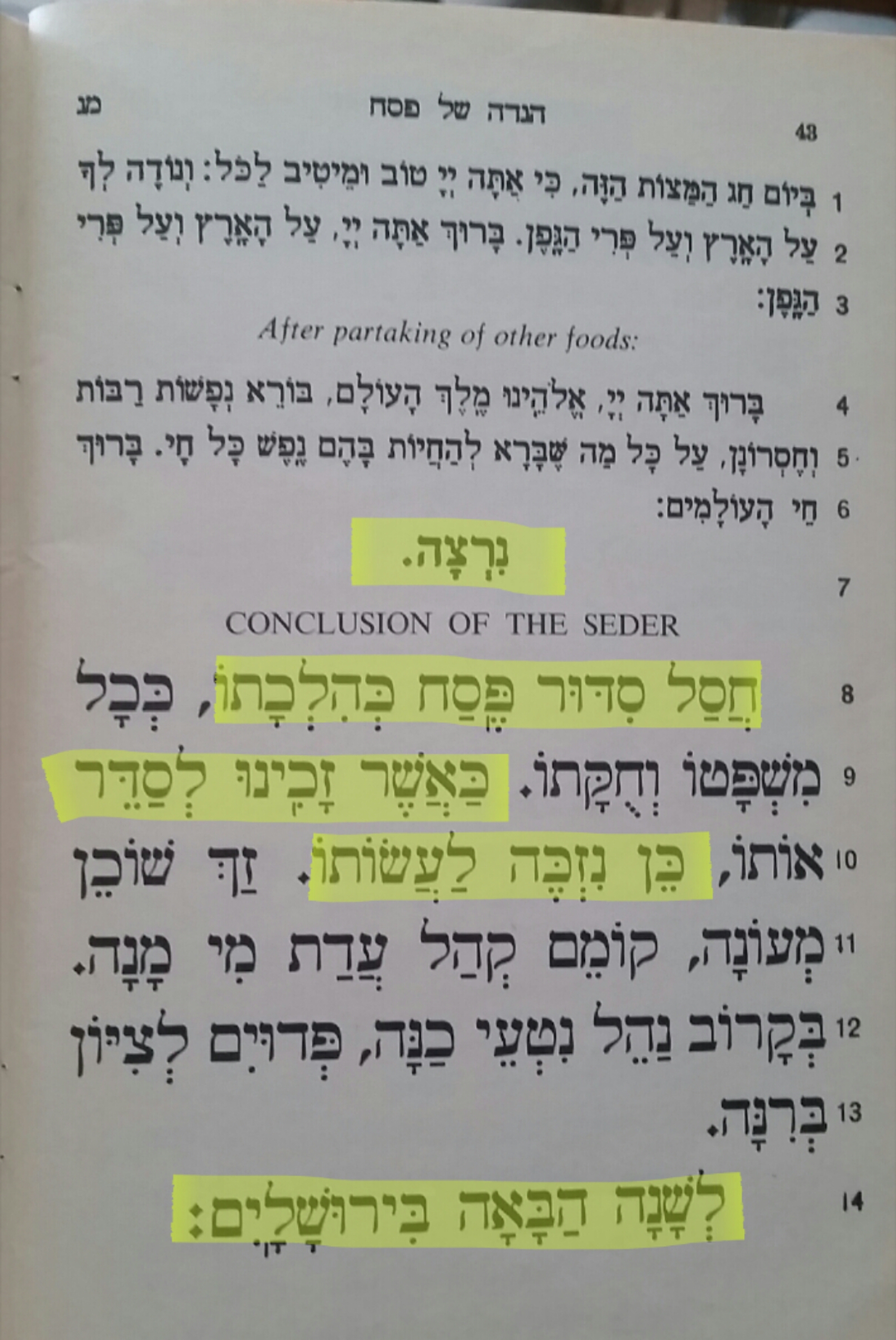 Every year on Seder night, when we reach Nirtzah, the final section of the Seder, we commence with these triumphant words of “Chasal Sidur Pesach.” This piece and its tune which sounds like the accompaniment to a victory march, appears like a self-congratulatory song about how we have completed the Seder with precision and to perfection, following every last Halachah to a “T.” It is certainly an encouraging conclusion to the Seder, which is likely why it is recited here. But, what do these lines actually mean?

“Chasal Sidur Pesach” is actually an excerpt from a longer, liturgical poem, “Elokei HaRuchos,” composed by R’ Yosef Tov Elem1 for Shabbos HaGadol, which outlines various Hilchos Pesach. The lines that made it to the conclusion of our Seder are actually the conclusion of the poem, hence, “Complete is the Seder of Pesach according to its laws,” i.e. the arrangement of all of the Hilchos Pesach.

Our recitation of these lines, however, requires some clarification. What do they mean when we declare them? As was mentioned, the way we sing them, they seem like a declaration of victory on our successful trek through the Seder. But, are we in fact applauding ourselves on a “job well done”? Is such a gesture appropriate? Is such validation truly warranted?

The word “Nirtzah” itself means “favored” or “accepted.” In our Seder, it is a reference to our hope that our “Avodah” on Seder night is indeed “accepted favorably” before Hashem. But, in fact, Nirtzah is a word that describes the receipt of an Avodah, a ritual service. More specifically, in Chumash, we find this word used to describe Hashem’s acceptance of our Korbanos—our real life animal offerings which we serve to be sacrificed upon the Mizbei’ach in Hashem’s standing Temple.

For example, in the beginning of Vayikra, the Torah commands: “…El Pesach Ohel Mo’eid Yakriv Oso Lirtzono Lifnei Hashem; V’Samach Yado Al Rosh HaOlah V’Nirtzah Lo L’Chapeir Alav”-“…To the entrance of the Tent of Meeting shall he bring it close to be accepted before Hashem; He shall lean his hands upon the head of the Elevation offering and it will be favorable for him to atone for him.”2

Pesach without the Pesach

When we consider this backdrop for Nirtzah, we cannot help but feel somewhat unaccomplished after the most recent Sedarim we have been observing to date. The Pesach done right—“K’Hilchaso”-“in accordance with its laws”—we would think, includes an actual sheep as a Korban Pesach, not a commemorative shank bone which sits on the table and may not be picked up when we proclaim the word “Pesach” aloud, because in fact, it is only a pretend Korban Pesach. We have a Matzah and Maror, but the main part, the roasted Korban Pesach has been missing. In fact, there is a strong custom not to serve any roasted meat at the Seder so that no one should mistake it as the actual Korban Pesach.3

Accordingly, it seems we can hardly describe our “fulfillment” of the Seder as “K’Hilchaso”-“in accordance with its laws.” It is a nice show and demonstration, but is it a Pesach to be proud of?

“This is the Toras HaOlah”4

Before we revisit the words of “Chasal Sidur Pesach,” there is room for us to derive some reassurance from Parshas Tzav. If one looks at Parshas Tzav immediately after Parshas Vayikra, one will note that Parshas Tzav mostly describes the same exact Korbanos that are found in Parshas Vayikra. The question is what the difference between the two Sidros is, what Tzav adds to Vayikra.

If one takes a closer look, perhaps the main difference between them is that while Vayikra introduces and defines the various Korbanos, Tzav elaborates on the procedures for those Korbanos, describing, step by step, how each one is carried out. So, if Vayikra introduces the Korban Olah, Tzav presents us with the “Toras HaOlah,” literally the “teaching of the Elevation offering”4 or the procedure for the Korban Olah.

At first glance, there is not much significance to this feature Parshas Tzav beyond the logistical aspect, that it provides instructions for those who could theoretically offer Korban. Since in our post-Temple era, we could not, it is not immediately relevant. However, Chazal beg to differ.

The Gemara5 questions the necessity of the word “Toras” in the phrase “Zos Toras HaOlah.” Perhaps it would have sufficed for the Chumash to have simply written that “this is Olah.” The Gemara suggests that engaging in the Torah study of each Korban is akin to offering that Korban. In other words, even the written procedure for Korban is significant. In a similar vein, apparently our literal “lip service” counts for something, as the Navi writes, “U’N’Shalmah Farim S’foseinu”-“and our lips should compensate for bulls.”6 For this reason, not only do we read the Korbanos for each festival in our Tefilah, but many have the custom of reciting the procedure for Korban Pesach before the Seder. That we have a “Toras HaOlah” to hang onto in the absence of the Korban Olah is an invaluable contribution from Parshas Tzav.

With that, we return to the end of the Seder. What in fact are we declaring when we sing the words of “Chasal Sidur Pesach”?

“Chasal Sidur Pesach K’Hilchaso” does not mean that we are claiming to have offered a perfect Korban Pesach, but that we completed the “Sidur” or the Seder—the procedure for the Pesach. And indeed, to the best of our abilities, perhaps we did it K’Hilchaso, as much as the current circumstances and contemporary Halachah allow us to. Are we proud of our performance? Are we proud of our merits? Not necessarily, but we were at least meritorious to execute a “Sidur Pesach” and that counts for something! It might be almost akin to offering the Korban Pesach. No, it isn’t the Korban Pesach, but it is perhaps a semblance of a Korban Pesach. This much, the poem is willing to admit, as he writes, “Ka’asher Zachinu L’Sadeir Oso Kein Yizkeh La’asoso”-“Just as we were meritorious to arrange it in order, so may we be meritorious to [actually] perform it [in practice].”

It is with this incredibly sobering humility that we pray at Nirtzah that, indeed, Hashem should accept our desperate appeal, our interpretive Seder for the “Avodah” that it is and isn’t, with or without the physical Korban Pesach. Every year without a real life Korban Pesach, we have to recognize that while our Seder counts for something, as perfectly or imperfectly executed as it is, we are lacking. And with that humility, our Tefilah of Nirtzah and “Chasal Sidur Pesach” should be answered favorably so that Hashem should not only accept our Sidur Pesach—our procedure for the Pesach—but our real life Avodah of the Korban Pesach once again, L’Shanah HaBa’ah BiYerushalayim!

May we all be Zocheh to experience the fullest fulfillment of Nirtzah, to be accepted, Bimheirah Biyomeinu! Have a GREAT Shabbos HAGADOL & a Chag Kasher V’Samei’ach!
-Yehoshua Shmuel Eisenberg 🙂