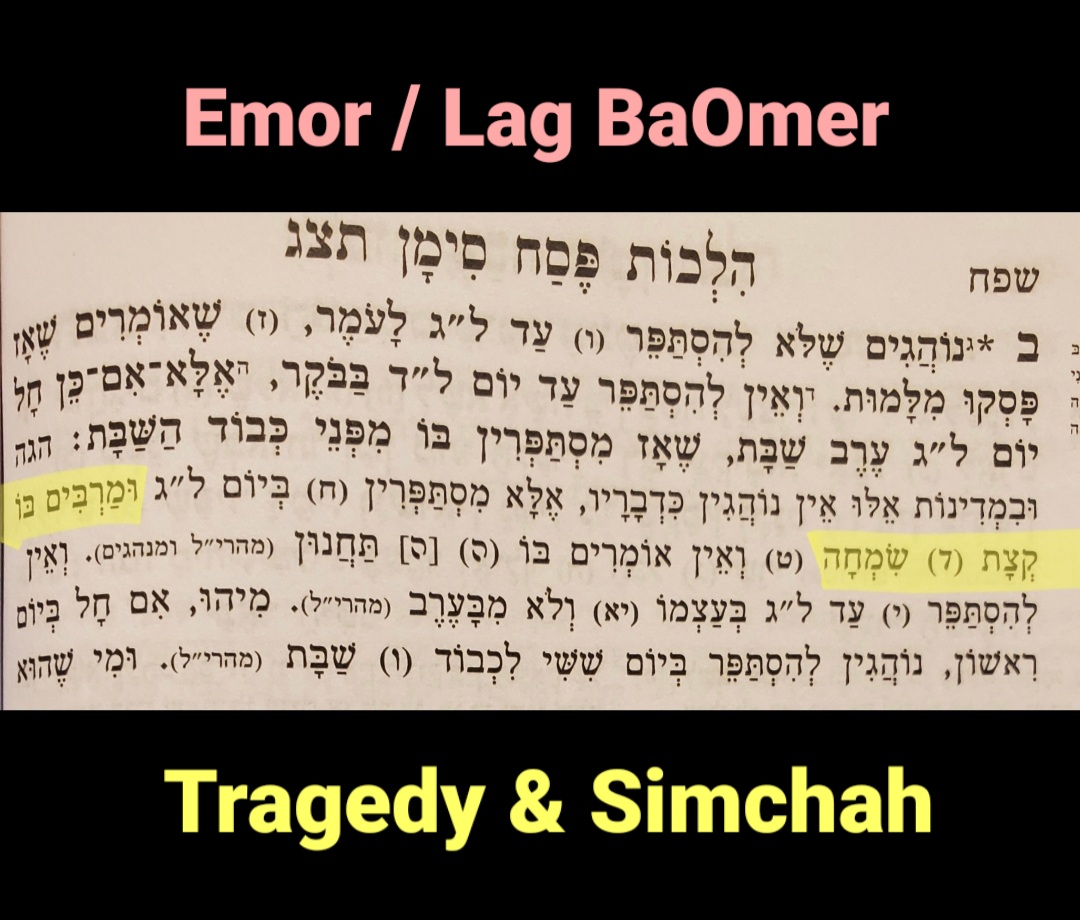 This Shiur is dedicated to the Refuah of those injured in the tragic Meiron incident tonight as well as to the Ilui Neshamah of those who were killed in the incident.

I write these words of Torah in wake of the tragic Meiron incident which saw the deaths of many and the injuries of more this Lag BaOmer. This tragedy stings doubly as Lag BaOmer is otherwise known as a time of Simchah following an already extended period of mourning [Rama, O”C 493:2].

Although there are perhaps many appropriate reactions and responses to the event, here are some thoughts, based on Parshas Emor and Lag BaOmer which can hopefully serve as source of some inspiration for these times.

The Simchah of Lag BaOmer

The truth is that the basis for the Simchah of Lag BaOmer is itself dubious and appears ironic at the outset. The mourning period of the first thirty-two days of Sefiras HaOmer is due to the deaths of Rebbi Akiva’s 24,000 students. The deaths famously ceased on Lag BaOmer, but that is because there were literally no more students left to die; they were all dead. How then can we express the emotion of Simchah in the face of obvious tragedy?

Perhaps a model for the unique challenge we face can be found in the Kohein Gadol. Parshas Emor describes the sensitive laws of the Kohanim. Among them, a Kohein may not contract ritual impurity from the dead, unless he is in the process of tending to his immediate relatives or an otherwise unattended dead body. However, the Kohein Gadol could not become ritually impure even for his relatives. That is apparently because his elevated level of holiness requires him to maintain his ritual purity at all times; indeed, he must always be prepared to engaged in the Avodah, the ritual service. In a similar model, we learned, on the day of the deaths of Nadav and Avihu that even when tragedy strikes, the Avodah must go on. Thus, Aharon and his sons, the Kohein Gadol and his Kohanic family, were prohibited from mourning that day.

But, why exactly couldn’t they mourn and tend to their befallen loved ones when that would have been the most natural and presumably appropriate response? What about their charge and calling to engage in the Avodah required them to withhold these human expressions of grief?

Very simply, perhaps it is in this Pasuk in Tehilim [2:11, 100:2] that the answer lies; “Ivdu Es Hashem B’Simchah”-“Serve Hashem with happiness.” Where there is “Avodah,” there must be “Simchah.” In other words, even in the face of tragedy, the Avodah must go on. And that means that as incredibly difficult as it sometimes is, for the sake of the Avodah, a degree of “Simchah” must be maintained.

Related, the Gemara in Yoma (14A, which appeared in Daf Yomi this week) explores whether or not the Kohein Gadol could perform a ritual service in the event that he loses an immediate relative making him an Onein (the status of the mourner pre-burial). Seeing as he may not consume the Korbanos when he is an Onein, perhaps he should also be disqualified from the Avodah. The Gemara discusses whether or not the case should be different on Yom Kippur when no one is eating anyway.

However, the Gemara challenges this hypothetical comparison based on a complicated, technical discussion recorded earlier pertaining to a Kohein Gadol who, for various reasons, needed to issue a “conditional” bill of divorce to his wife before Yom Kippur which would theoretically take effect on Yom Kippur. Very simply, the Gemara argues that if the Kohein Gadol technically divorced his wife, he would not become an Onein and should therefore not be prohibited from consuming Korbanos (if it weren’t Yom Kippur). The Gemara’s response is so down to earth, it is stunning: “Granted, Aninus (Onein status) does not take effect, but is he not mentally burdened?” Explains Rashi, even if the Kohein Gadol was not technically an Onein, the Avodah of consuming the Korbanos must be performed with Simchah which cannot be done if this Kohein Gadol is emotionally plagued by the death of his former wife!

Where there is Avodah, there has to be Simchah. And if the Kohein Gadol, the superhuman of Klal Yisrael, cannot live up to these superhuman expectations, he cannot perform the Avodah.

Maintaining Simchah in every Avodah is a tremendously challenging Avodah in its own right, and although that may perhaps be too much to require of most humans, for Rebbi Akiva as well, for the sake of Torah, the Avodah had to go on. Yes, he lost 24,000 Talmidim, and by all logic, there is no reason to celebrate once they’ve depleted. But, Lag BaOmer was the day that Rebbi Akiva turned the page and started over with a select few Talmidim, because indeed, the Avodah had to go on, and that means that some Simchah had to remain intact in the face of tragedy. And perhaps, if he could not muster up the Simchah to teach Torah again, we would no longer have the Torah as we know it.

Although the conservation and continuity of Torah is something that is worth celebrating, we can appreciate the challenge of mustering up Simchah in the face of tragedy, especially today. And perhaps, the Halachah was sensitive to this challenge. If one looks closely at the Rama’s language, he writes precisely that on Lag BaOmer, “Marbim Bo Ketzas Simchah”-“we increase rejoicing slightly“ [Ibid.]. Indeed, there is no question as to the tragedy that took place. The emotional struggle is real. But, there are times when the Avodah must go on, and when we try ever so slightly to increase our Simchah somewhat to perform and celebrate that Avodah.

May we all be Zocheh to not only celebrate both our Avodah and happier times in general, but to celebrate the restoration of THE true Avodah and the happiest of times with the Geulah and the coming of Moshiach; HaRachaman Hu Yachzir Lanu Avodas Beis HaMikdash Bimeheirah Biyomeinu! Have a Great Shabbos and a Lag Samei’ach!