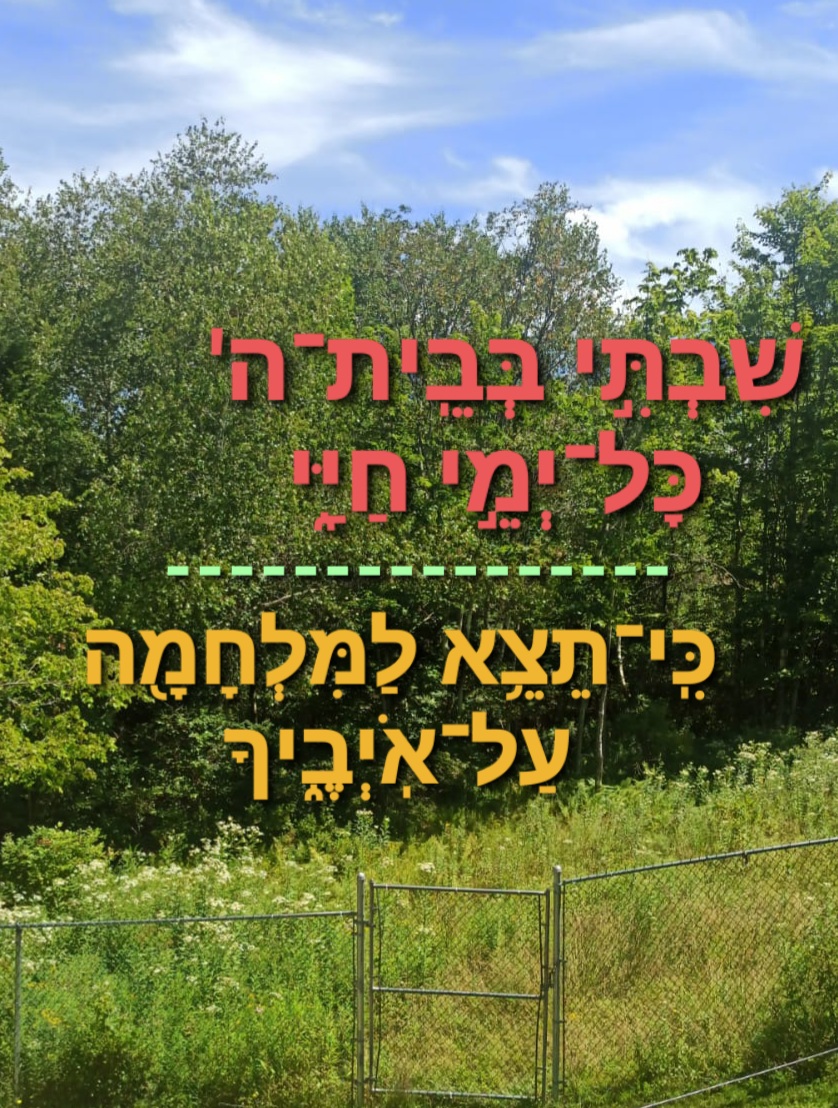 It is interesting to note that the Parsha which is home to the most Mitzvos in the entire Torah falls under the heading of “Ki Seitzei LaMilchamah Al Oyivecha”-“When you go out to war against your enemies” [Devarim 21:10]. One would think that with such a title that we would begin to hear about a series of laws pertaining to war. However, that series ended in Parshas Shoftim.

Ki Seitzei, though it devotes some space to war, focuses broadly on the laws of everyday living; homemaking, family building, and community engagement. We have laws pertaining to the safe construction of a house, the planting of vineyards, marriage, lofty ethics in business, fair treatment of peers and underlings, and acts of community service like returning lost objects. In other words, Ki Seitzei is about everyday life.

If the above is true, why are these everyday laws placed under the umbrella of the “war” against our “enemies”? Maybe, we can suggest simply that the Torah is secretly intimating that every day, countless battles must be waged. No, it’s not against a foreign nation. It’s a domestic battle against an enemy close to home. And no, it is not against our neighbors or family members. It’s against ourselves and our inner inclinations. Every Mitzvah, every moment of everyday life is a constant battle. There is not a moment’s rest.

And this does not have to be a discouraging reality. On the contrary, because of this ongoing battle, each moment and Mitzvah of everyday life provides each of us the opportunity to fulfill our single life goal. What goal are we referring to?

When it comes down to it, our souls want nothing more to just sit in Hashem’s House, be it the Shul, the Beis Midrash, and one day soon, the Beis HaMikdash, and just bask in Hashem’s Presence. This is not just one thing we ask between Rosh Chodesh Elul and Simchas Torah. It is apparently “THE one thing we ask of Hashem.” And how can we achieve that? Perhaps one way is to literally position ourselves in the “house of Hashem” and contemplate in His sanctuary. In other words, just do it! And, Baruch Hashem, many people can and do! But, what about when everyday life overtakes us? What happens when we have to “go out to war against our enemies,” or get married, build a home, engage in business, and when, maybe, we don’t feel that we have the luxury of being in Hashem’s house all the days of our lives?

The answer to this question can be found in a much earlier Parsha that almost shares a title with Ki Seitzei. In Parshas Vayeitzei, Yaakov Avinu had to “go out” and fight his own wars, build a family and home, and spend some time outside the Beis Midrash. And yet, it was there, on his way “out” when Hashem rested His Presence upon Yaakov, when Yaakov experienced prophecy and proclaimed, “…Mah Nora HaMakom HaZeh Ein Zeh Ki Im Beis Elokim V’Zeh Sha’ar HaShamayim”-“…How awesome is this place! This is none other than the House of G-d and this is the Gate of Heaven!” [Bereishis 28:17]

He never had to leave the “House of Hashem” even while he was “going out,” and neither do we. The “House Hashem” ended up coming to Yaakov. Why? How? Because, Hashem situates His Presence wherever His Ratzon is being fulfilled. That is what the Gemara in Brachos [8A] meant when it taught that in the absence of a physical, literal Beis HaMikdash, Hashem resides in the four Amos of Halachah. And that means that in everyday life as well, in every moment and Mitzvah, we can take the portable House of Hashem with us all the days of our lives. If that is truly the one thing that we seek, then “Yitzpeneini BaSuko” [Tehilim 27:5]–Hashem will shelter us in His makeshift house.

Of course, all of this above seems easier said than done. It is a Milchamah at all moments. But, if we have in mind the mission statement, the one thing that we want and ask of Hashem, we will win the battle and achieve it. To help us, right here in Parshas Ki Seitzei, “Hirbah Lahem Torah U’Mitzvos” [Makkos 3:16], Hashem “increased” and provided ample Mitzvah opportunities in all areas of life that serve as a practical framework for that lifetime goal which can actually be lived all the days of our lives.

We should be Zocheh to not only yearn to sit in the House of Hashem all the days of our lives, but to actually do so, not just in the Beis Midrash or in everyday life, but in the Beis HaMikdash with the coming of Moshiach, Bimheirah BiYomeinu! Have a wonderful Shabbos!