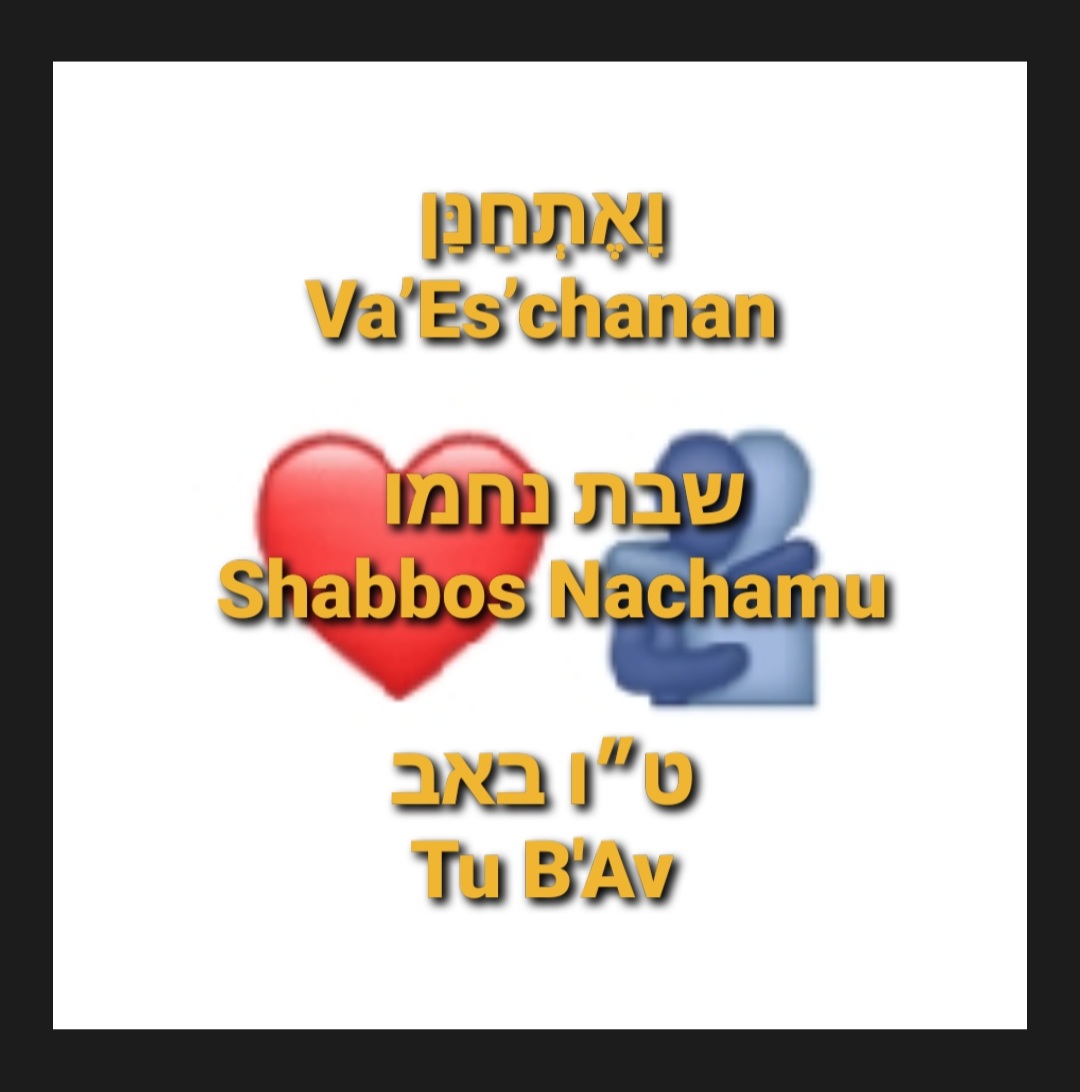 Shabbos Nachamu, the Shabbos after Tish’ah B’Av, signals us to be comforted, despite the destruction we just mourned. One of the critical questions and challenges with this call to Nechamah is: How can we achieve consolation where there is still desolation?While there are various important answers to this question, one can be found in Tu B’Av, which this year, coincides with Shabbos Nachamu. Somehow, Tu B’Av became known as a day of “love” and “match-making.” Now, if one looks up the several origins of this holiday, indeed, some of them touch on the theme of marriage [See Ta’anis 30B-31A for the entire list].
For example, Tu B’Av was when the ban against inter-tribal marriage (which was instituted to assure fair division of Eretz Yisrael) was finally lifted. Additionally, Tu B’Av was also when the ban against intermarriage with Sheivet Binyamin (following the tragedy of Pilegesh B’Giv’ah) was also finally lifted. But, beyond these two examples, several other sources are brought down that have seemingly nothing to do with marriage.

For example, the Tu B’Av origin story that’s most seemingly relevant to Tish’ah B’Av, is that in generation of the wilderness, every Tish’ah B’av night, the B’nei Yisrael dug their own graves and slept in them whereupon a many of them died, until the fortieth and final year of wandering; fifteen thousand people who had seemingly remained from the first generation had gone to sleep but woke up and assumed that there was some miscalculation concerning the calendar date. So, they “tried again” and again until Tu B’Av when they saw the full moon and realized that the decree was up and they would enter Eretz Yisrael. This story is uplifting, but what does it have to with Shidduchim?

Tu B’Av was also the day when Hoshei’a Melech Yisrael removed Yerav’am’s idols on the road leading to Yerushalayim, finally allowing the ten tribes to access to the Beis HaMikdash. An important and happy occasion, but does it have to do with marriage?

And although there are other origins to Tu B’Av, we’ll mention one more. Tu B’Av was apparently when the Romans finally permitted the burial of the victims of the massacre at Beitar during the Bar Kochba revolt. The added miracle was that the bodies had not decomposed until they were given a proper burial. Another consoling story perhaps, but once again, what is Tu B’Av really about?

To answer these particular questions, we have to actually take a step back and reverse the questions. Tu B’Av, we said, has the reputation of being a day of “love.” Well, what even is “love”? Typically, we assume that it has something to do with a husband and wife caring about each other. But, that’s a surface understanding of the concept. Why does the concept exist? G-d could have created the world without love and the marital relationship between a husband and wife. Why is this institution so fundamental to life?

Parshas Va’Es’chanan is the Parsha that really introduces this concept of our “love” relationship with Hashem and how our relationships are supposed to build on and toward it. For example, Moshe Rabbeinu reminds us in Va’Es’chanan that it was those who cleaved with Hashem and did not embrace Avodah Zarah who remained from the generation [Devarim 4:4]. Moshe commands us in Va’Es’chanan that which we recite every day, several times a day, “V’Ohavta Eis Hashem Elokecha,” [Ibid. 6:5] that we must love Hashem with every sense of our being. Moreover, Moshe feels a need, in this Parsha, to caution us not to intermarry with idolatrous nations who obviously don’t plan on building a relationship with Hashem, and explains that we are different and treasured from them specifically because of Hashem’s love for us [Ibid. 7:3-8].

What is the point? That this deep love is reserved for Hashem and those who help build on it, K’Hilchasah (according to Halachah), B’Kedushah U’V’Taharah (in holiness and purity).

That is what Tu B’Av is really about. The removal of all boundaries from holy unions. For example, in the wilderness, thousands of us who thought we would not receive entry to the Holy Land learned that we would return there. Moreover, the idols are not longer on the road blocking us from the Beis HaMikdash. The enemy is no longer preventing the Neshamos of the martyrs of Beitar from reuniting with Hashem. And now, we no longer differentiate between tribes, so long as it is within Am Yisrael, where the goal between the couple is the same, to build on the holy love they share with Hashem. On Tu B’Av, all roadblocks to Ahavah with Hashem are gone. Even in the face of destruction, Tu B’Av provides this consolation; the reminder that we have full access and control over our relationship with Hashem. That is something that no one can take away from us. Yes, it is delicate, and indeed, we, by our own poor choices can ruin it through something as extreme as intermarriage and embracing foreign deities, or through something as simple as building a home that is not fully founded on Ahavas Hashem and Ratzon HaTorah. But, if we are set on sustaining and strengthening our relationship with Hashem, no one can stand in the way of that. At the end of the day, our external circumstances are just that; external circumstances. Ultimately, it is about us and Hashem, and the Ahavah that we share. We can theoretically or even practically be in Galus. The Ahavas Hashem still comes from within us, and is there for up to us.

That is favor of Va’Es’chanan, the comfort of Nachamu, and the love of Tu B’Av! We should be Zocheh to this Chein, Nechamah, and Ahavah in their fullest form with the coming of Geulah in the times of Moshiach, Bimheirah BiYomeinu! Have a Great Shabbos Nachamu/Tu B’Av!