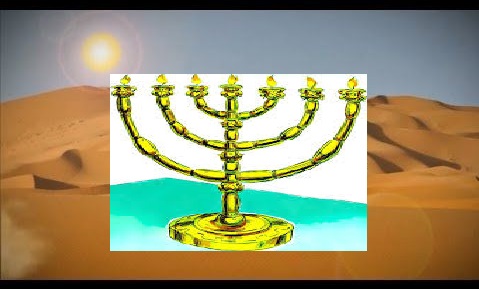 Parshas B’Ha’alosecha shares its Haftarah with none other than Shabbos Chanukah. Both occasions find their Haftarah in the passage of Zechariah which describes the vision of the Menorah [2:14-4:7]. This Haftarah is a convenient one for both days as the Menorah, on the one hand, is the icon of Chanukah as it is the basis for the modern Chanukiyah, and on the other hand, it is featured in the opening passage in B’Ha’alosecha as the Torah commands Aharon HaKohen to kindle the Menorah in the Temple.

However, a question that can be asked for both B’Ha’alosecha and Chanukah is if this Haftarah truly captures the essence—of either the Sidrah or the holiday. Perhaps, we can argue that for Chanukah’s purposes, the holiday really does, in many ways, revolve around the Menorah and the miracle of the oil so that a Haftarah about the Menorah would make plenty of sense (and that is not to say that there are no other important themes of Chanukah). However, this mere reference to a Menorah in Zechariah’s prophecy really seems like just that—a mere reference to a Menorah. Beyond the plain imagery, does the Haftarah at large really capture the theme of Chanukah?

As far as B’Ha’alosecha is concerned, the question is far greater. B’Ha’alosecha hardly has anything to do with the Menorah. The Menorah appears in a particularly brief passage at the beginning of a long Sidrah that contains many stimulating topics and stories with many crucial lessons to be learned; it discusses Pesach Sheini, Yisro’s request to go home, the drama revolving the Moshe and the complaints of the people, Miriam’s slander of Moshe, and so much more. That being the case, doesn’t the choice to reread the Chanukah Haftarah which shares one passing detail with our Sidrah seem like somewhat of a copout?

In terms of this Haftarah’s connection to Chanukah, if all there was the imagery of the Menorah, the Haftarah would have been much shorter. Before the Menorah appears in Zechariah’s vision, late in this Haftarah [4:2], the Haftarah focuses on another vision in which Zechariah sees what looks like a court case in which the defendant is Yehoshua Kohein Gadol who is being prosecuted by the Satan [3:1].

In this court case, the angel of Hashem tries to denounce the Satan and advocate for Yehoshua, but the Navi tells us that he is wearing “filthy garments,” which Chazzal interpret as the stain on his family legacy as his children had intermarried with gentile women. Whatever the filthy garments represent, anyone who comes to court not dressed appropriately is obviously not setting the right tone for a winning court case. And yet, the angel has Yehoshua’s “garments” removed and replaced with new ones, and then warns Yehoshua to commit to following Hashem’s ways.

It is after this strange trial that Zechariah dreams of the Menorah. But, why did the trial of Yehoshua Kohein Gadol make it into this Haftarah? What does it have to do with anything?

However, it could be that Chanukah’s deeper theme can be found in this peculiar court case. This court case was not just about Yehoshua Kohein Gadol. It was about the entirety of the B’nei Yisrael, the proof being that the angel advocated for Yehoshua describing Hashem as the, “Bocheir Yerushalayim,” or the “Chooser of Jerusalem.” Thus, the court case fundamentally represents the absolute patience of Hashem in a time of darkness where the B’nei Yisrael really didn’t deserve it.

From a justice perspective, it seems absurd. Yehoshua Kohein Gadol, one of the primary leaders of the B’nei Yisrael at the time, who apparently has intermarried children, standing there in filthy garments, is reassured that everything will be okay. He comes to court, apparently guilty, and all it takes is a change of clothes and warning to behave and he is off the hook. In a normal court case, that would not work; however, even the otherwise reasonably guilty can find grace in Hashem’s court which exists beyond the letter of the law. It is a supernatural judgment, hope in a place of despair.

The Menorah alone is just a candelabrum, but with this backdrop, it represents this very hope which we’re describing, a light in the place of darkness. It is the underserved grace of Hashem, thus Haftarah closes with the assurance of “Chein Chein Lah”-“Grace, grace will be for her” [4:7]. It was this undeserved grace that made the miracle of the oil particularly special in the times of Chanukah. Make no mistake. Anyone who is familiar with the dynasty of the Chashmona’im knows that the B’nei Yisrael were less than worthy.  But, Hashem was always there, looking to grant them favor in the dark time when it was needed.

Many point out that it is specifically in the long and dark winter season that we truly need the encouragement of the Chanukah lights to remind us that even when our current situation seems G-d forsaken, it is never the case. Hashem is always there beside us bestowing His grace upon us even there.
During the winter, this encouragement is provided by Chanukah. But, come Parshas B’Ha’alosecha, we are far from the long, dark, winter nights, as we stand at the cusp of summer. Why, then, do we reference the Menorah when ‘tis not the season? (Please forgive me for that one.)

In order to answer this question, we have to consider another important question which we have not discussed yet, and that is why B’Ha’alosecha talks about the Menorah in the first place. We already argued that the Menorah does not seem like one of the major discussions in the Sidrah, but perhaps we could argue further that it is not relevant at all. For a Sidrah, again, which covers so many stirring topics, where does Menorah fit in?

The the Midrash picks up on the fact that the command is juxtaposed to the offerings of the Nessi’im (Princes) of each tribe which appears at the end of Parshas Nasso. And in this Midrash, Chazzal explain suggest that Aharon was upset that he was given the opportunity to offer anything along with them, to which G-d appeases him with the command to light the Menorah [See Rashi to B’Midbar 8:2, quoting Tanchuma B’Ha’alosecha 3].

The problem is that although this is an answer, it only explains why the Menorah is juxtaposed to the passages of the Nessi’im. But, why does this passage become a new Sidrah to be paired with the rest of the events of B’Ha’alosecha? Why couldn’t it be left in Nasso? Was Parshas Nasso just too long already? It is just four more verses, not a big deal. Why open a new Sidrah with the Menorah?
The real question is if there is perhaps something more fundamental that connects the Menorah to the larger discussion of B’Ha’alosecha. And perhaps, the answer, to that question, is “Yes.” The Menorah, lit by Aharon the Kohein Gadol himself, is the reminder of Hashem’s never ending search for merit in the B’nei Yisrael even the darkest places where it cannot be found. It is, as we’ve explained, a sign of hope.

And the Haftarah teaches us that the lesson of the Menorah is not merely one for the physical winter, but it is one for Galus of all forms, and if one looks at our Sidrah, B’Ha’alosecha is the beginning of the hot, exhausting Galus in the desert. But this exile was of a unique kind because there was no shortage of physical light and warmth in the sunlit wilderness. However, at the same time, there was by no means a lack of darkness of Exile, at least the way the nation perceived it. In truth, not only was there physical light, but situationally speaking, the B’nei Yisrael are on their way to the Promised Land with Hashem at their side, feeding them and sheltering them, but they caught up in their own folly, complaining against nothing substantial. Moshe gets overwhelmed. Miriam even steps out of line.

B’Midbar, as we’ve explained in the past, describes a series of unfortunate events, but the irony is that it was all unfolding in a time where everything should have been fine. They were not under attack and they were being taken care of, and all on the while, they were on their way towards redemption. But apparently, Galus can seep into the good times too, oddly, when things are working out. It was an even more terrifying and seemingly inescapable Galus of our own minds where we perceive life as though “everything is going wrong,” when perhaps nearly everything is actually going perfectly. What emerges is that we can forget, in the times of “should-be” light, that Hashem is there.

Thus, a Chanukah reminder is in order—not just in the “winter,” but in the spring, summer, and fall, as well. Each season comes with its challenges. Some of those challenges come with objective darkness—illnesses or other such tragedies which we cannot avoid. There are enough of those in the world, and even then, we’re told to realize, through the Menorah, that G-d is there. Thus, for example, on Chanukah when such exile existed with no merit to speak on our behalf, Hashem somehow declared us “innocent” and lets us off with a “warning.” But, when there is light surrounding us, but we’re trapped in our own misconceptions of the world around us, allowing ourselves to complain about darkness when we’re standing under the sun, it’s a Galus of our own creation. Who can help us then?

The Menorah is the reminder that Hashem is there and that He is looking not to weasel us, but to grace us with underserved kindness. That’s Hashem’s part which is more than reasonable, a true bargain for us. Our Haftarah, at this juncture, teaches us that we have to stop complaining, but rather acknowledge this “Chanukah miracle” once again and to pay attention to Hashem’s Presence even in the summer time. It reinforces the message of Chanukah seasons later, teaching us not to forget that Hashem is always there.

May we all be Zocheh not only Hashem’s grace in all circumstances and seasons, light or dark, but to truly appreciate that grace, and Hashem should continue to reveal His graciousness to us and lead us through the desert of exile once and for all towards the Geulah with the coming of Moshiach, Bimheirah Biyomeinu! Have a Great Shabbos!
-Yehoshua Shmuel Eisenberg 🙂