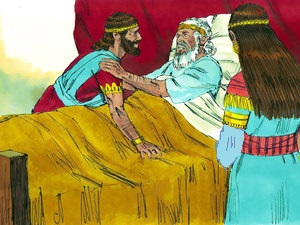 Parshas Chayei Sarah describes the aging Avraham Avinu as he seeks out an appropriate wife for his son and successor Yitzchak Avinu. The Haftarah, taken from Melachim Aleph [1:1-31], similarly describes an aging Dovid HaMelech as he prepares to turn over the kingship to his sons son and successor. Yitzchak would ultimately continue the role as a forefather and progenitor to what would become the B’nei Yisrael. In a similar vein, Dovid’s successor would assume the role as the king and leader of that very people. But, is that all the Haftarah wants to highlight about our Sidrah? Or is there perhaps something more to the Haftarah of Parshas Chayei Sarah than just the surface theme of succession?

Indeed, while succession of spiritual legacies is an apparent link between Chayei Sarah and the beginning of Melachim, there are other texts out there, even in Navi, that can easily project the same theme. In the beginning of Sefer Shmuel for example, Eili HaKohein gets old and needs to be succeeded by his disciple Shmuel HaNavi. Shmuel also gets old and has to appoint a king, Shaul, to lead the people. Later in Melachim, Eliyahu HaNavi passes the mantle to Elisha. What makes our Haftarah’s succession story so much more fundamentally connected to Chayei Sarah?

Moreover, we might even suggest that Chayei Sarah is not just about successions, but it tells a story that focuses more heavily on the theme of seeking out the perfect wife. In that case, the Haftarah selection could have been about Dovid HaMelech’s marriage to the righteous Avigayil, a woman who demonstrated exemplary Chessed in spite of the fact that she was living in the house of a jerk like Naval, much like Rivkah Imeinu does in our Sidrah, in spite of the fact that she had grown up in the house with the sleazy, greedy Lavan.

None of these stories are featured in our Haftarah. Instead, we hear a story surrounding two of Dovid’s sons and contenders for the throne, the handsome and arrogant Adoniyah versus the genuine man who ultimately becomes Shlomo HaMelech. So, what is this story truly about?

In this story, Adoniyah does some campaigning, gains a following, and continually asserts what in his mind, is the fact that he will be succeeding Dovid HaMelech, completely to the disapproval of Nassan HaNavi and Bas-Sheva, the wife of Dovid and mother of Shlomo. Despite the fact that Dovid had sworn that Shlomo would ultimately succeed him, Dovid appears aloof and unconcerned about Adoniyah’s campaigning, and as such, Nassan and Bas-Sheva methodically discuss how they can properly bring the matter to Dovid’s attention so that he can publically address it and denounce it.

Ultimately, Nassan would arrange that Bas-Sheva presents her case to Dovid whereupon Nassan would enter the room in the mid-conversation to supplement her case. The urgency would be received and Dovid would have to act.

So, what makes this succession story of Dovid HaMelech an ideal reading selection for Chayei Sarah?

More than the mere theme of succession, the bond that this narrative shares with the Sidrah is the importance of the process—the thought and careful planning that goes into assuring that the correct successor is not only recognized, but spiritually protected.

Sarah Imeinu’s last major contribution to the Abrahamic mission which is recorded in the Torah is her expulsion of Hagar and Yishmael, back in Parshas Vayeira. She, through her intuition and insight, realized that Yishmael’s proximity to Yitzchak would hinder the spiritual growth and contaminate the legacy she and Avraham worked tirelessly to build, a legacy of Divine service. Yishmael could not be a successor with Yitzchak in this mission, and anything that would call the succession into question needed to be addressed immediately. Much like Dovid, Avraham seemed to know who his main child and successor would be, but some preventative measures still needed to be exacted.

Once we’ve hit Chayei Sarah, Sarah is gone. The question now is who will be there to reassure that the spiritual mission of Avraham will remain unhindered by some kind of contamination during the succession process? Who will assist Yitzchak in continuing this delicate mission? Who will carry on the “Life of Sarah”?

Thus, in our Sidrah, the Torah tells us, not just about Eliezer’s selection of Rivkah as the match for Yitzchak, but about the entire thought process, what exactly Eliezer’s criteria were, the effortful planning and Divine input that went into making sure that this decision would be a precise and unmistakable one. Eliezer was looking for the right “filler” for Sarah, a woman whose life would be devoted to continuing and, more importantly, guiding the Abrahamic mission. Eliezer sought out a woman of such virtue for Yitzchak, and he found her in Rivkah.

Very quickly, the Torah attests to Rivkah’s perfect fitting into Sarah’s shoes as it tells us that Yitzchak brought Rivkah into Sarah’s tent, and that only then was he comforted from his mother’s passing [Bereishis 24:67]. Clearly, with Rivkah’s selection, a befitting successor was secured.

But if Rivkah’s perfectness for the role was not clear enough, the Torah will soon demonstrate in Parshas Toldos that in Rivkah herself, there is also, this unique, Sarah-like intuition and discernment to recognize and protect the next successor. After living around the likes of the sly conman in her brother Lavan, Rivkah is able to see right through her son Eisav’s façade and selects the wholesome Yaakov to secure Yitzchak’s blessings, something which Yitzchak would’ve otherwise failed to do on his own.

What emerges is that just as Avraham saw no threat in Yishmael, Yitzchak too saw no issue in allowing Eisav to succeed him too. It could be that Avraham and Yitzchak’s aloofness to their respective sons’ spiritually deficient ways is repeated in the times of Dovid, as the Navi specifies that Dovid failed to rebuke Adoniyah [Melachim Aleph 1:6]. However, in the nick of time, reason and discernment chime in for Avraham, Yitzchak, and Dovid each when spiritually informed individuals arrive on the scene and save the legacy from falling into the wrong hands. Sarah revolutionized this need for all spiritual impediments to be noted and separated from the successor. Eliezer would take a page out of the same playbook to assist Avraham in selecting Rivkah. And Rivkah herself would do the same when helping Yitzchak choose the right successor. This was the role of Rivkah and this was the essence of the “Life of Sarah.”

Finally, Dovid HaMelech needs some assistance. Here, in our succession story at the beginning of Melachim, we have not only a tale of torches passing and legacies being forged, but a continuation of the necessary thought and intervention that is often still needed to assure that the future succession is determined properly and remains unaffected by outside influences. As Dovid’s days on the throne are numbered, just as the days of both Avraham and Yitzchak’s lives were, the crucial question regarding the next successor arises and lingers over the kingdom of Am Yisrael. With this spiritual succession hanging in the balance, Nassan and Bas-Sheva, much like Eliezer and Rivkah, enter the scene, tapping into the “life of Sarah,” to carefully reassure that there is a successful succession.

May we all be Zocheh to not only carry on and pass on the spiritual legacy and missions of our Avos and Melachim in the service of the One “Avinu Malkeinu,” but we should have the spiritual intuition and insight to protect and reassure that the spiritual legacy and mission remain pure and secure, and then, Hashem should protect us, keep us pure and secure forever, in the days of Moshiach, Bimheirah Biyomeinu! Have a Great Shabbos!
-Josh, Yehoshua Shmuel Eisenberg 🙂