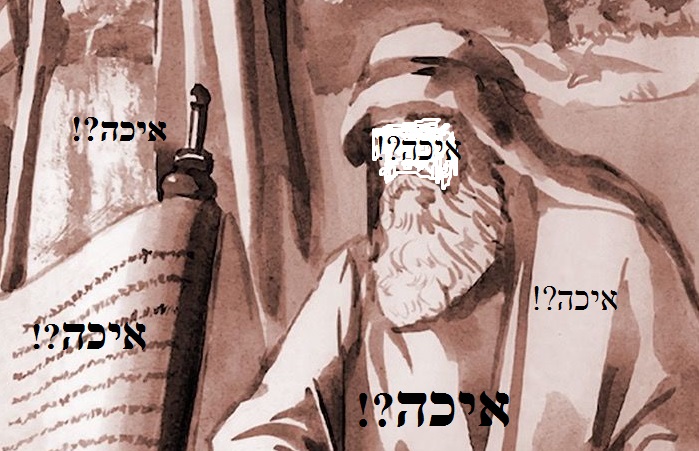 For the third and final Haftarah of the Telas D’Puranusa (Three of Affliction), we move away from Yirmiyah and turn our attention to the opening prophecy of Sefer Yishaiyah, a passage known as Chazon Yishaiyahu, literally, the Vision of Yishaiyah.

The Shabbos before Tish’ah B’Av is named Shabbos Chazon after this Haftarah, and so, we would assume that the purpose of Chazon Yishaiyahu is to serve as some preparation for the tragic day. In fact, it would seem that it is for this reason that many have the custom of reading this Haftarah to the somber tune of Megillas Eichah, the book which mourns the Churban Beis HaMikdash, as opposed to the typical Haftarah tune.

So, after hearing two passages of warning from Yirmiyahu, what is the final message that we need to hear before the exile unfolds?

To answer that question, we have to first figure out what exactly the Chazon or vision was that Yishaiyah had. Astonishingly, if one begins to read the text of our Haftarah, the vision is not so clear. The Navi opens [Yishaiyah 1:1] “Chazon Yishaiyahu Ven Amotz Asher Chazah Al Yehudah V’Al Yerushalayim…”-“The vision of Yishaiyahu son of Amotz which he saw [envisioned] concerning Yehudah and concerning Yerushalayim…” However, the Navi hardly follows this introduction with solid imagery or visual content. That’s obviously strange because when we’re told that we’re about to hear about a Chazon, or a vision, we would expect to hear a detailed description of what it was that Yishaiyahu was seeing. Was he seeing a city engulfed in flames? Perhaps an army storming the gates of Yerushalayim? What is the “vision” of Yishaiyahu which we’re being warned about?

So, as it happens, several verses in, Yishaiyahu does briefly mention the image of a desolate land and a burnt city [See 1:7], but that’s quite a generic portrayal of destruction. Tragic, yes, but, hardly a descriptive vision. And again, it’s not even until several verses in that we’re even provided with this basic imagery. Until that point, Yishaiyah really just seems to be chastising the people for their sinful ways.

The fact that this prophecy starts off with this “Chazon” tells us that, in fact, the most important and telling “image” is visible way before that of the destruction. Perhaps the Navi is suggesting that the “vision” of Yishaiyah is not so much about what the city will look like after it’s destroyed, but what it looks like just before that. But, what could the terrifying vision be if not the destruction itself?

So, the Navi proceeds its diatribe of the B’nei Yisrael saying [1:2], “Children whom I’ve raised and exalted [they are]; but they have rebelled against Me.” Then, the Navi makes the infamous and disturbing observation that although an ox recognizes its own master and a donkey, its master’s trough, Yisrael somehow does not recognize Hashem [1:3]. And although the B’nei Yisrael used to be known as a Goy Kadosh (holy people) and an Am Segulah (treasured nation) [Shemos 19:5-6], the Navi also tells us that they have severely downgraded to “Goy Chotei” and an “Am Keved Avon” [Yishaiyah 1:4], a “sinful people” and a “nation weighed down by iniquity.” Then, the Navi goes on to not only compare Israel to Sodom and Amorah but to address them as Sodom and Amorah [1:7-10].

Indeed, more than anything else, this is the frightening vision! It is the people of Israel itself, what they have become. Ironically, it is not necessarily something that one needs to be a prophet to see. It’s observable to the naked eye. It precedes the destruction and exile by a fair amount. But, someone has to call it out for what it is. And in that light, Yishaiyah brings our attention to this disturbing sight. It is the vision, not of destruction, but a failing nation which caused the destruction.

As the Haftarah continues, the Navi slams the people for raising their blood-filled hands to Hashem in prayer and challenges them, asking why they think Hashem wants their sacrifices. Reasonably so, the Navi argues that the people ought to worry less about their rituals and more on improving their ways [1:11-18]. Perhaps the greatest testament to this misplaced priority is the Destruction of the Temple itself, a message that their worship has been rejected.

But perhaps the most telling line and imagery of this Haftarah and vision appears towards the end. Yishaiyah laments as follows [1:21] “Eichah Haysah L’Zonah Kiryah Ne’emanah Milei’asi Mishpat Tzedek Yalin Bah V’Atah Miratzchin”-“How has she become a harlot?! A faithful city, full of justice, righteousness lodged in it, but now, murderers!”

That word “Eichah” echoes with a haunting resonance, obviously resembling the opening word of Yirmiyah’s Book of Lamentations [Eichah 1:1]; “Eichah Yashvah Badad HaIr Rabbasi Am Haysah Ka’Almanah?”-“How could it be [that] she (Yerushalayim) sits alone, the city great with people, she was like a widow…?”

That word alone makes this Haftarah a fitting one, and the parallel between Yirmiyah’s “Eichah” and Yishaiyah’s “Eichah” is so striking that the Midrash draws connections between this verse and that of Eichah [See Eichah Rabbasi 1:1]. However, if we look at the two verses, that’s not the only parallel here. In perhaps the better known verse from Megillas Eichah, Yerushalayim is compared to an Almanah, a widow. But, in our Haftarah, Yishaiyah compares the city to a Zonah, a harlot.

What is truly fascinating about these two images, a widow and a harlot, is that both of them are women who are ultimately alone in the world, without love. Anyone could see how this is true for the Almanah who has lost her husband. But, for the Zonah, it’s not as obvious to the ignorant observer. That is because the Zonah gives off the impression of being with others. She appears to love and be loved by others, but to anyone who knows better, she is obviously not loved by anyone. She is, in fact, alone.

But, aside from the appearance, there is another major difference between the Zonah and the Almanah. Although both of them are effectively alone, the Almanah is not alone by choice, but by the tragic results beyond her immediate control. Her husband died. Hashem declared that that should happen. The Zonah, however, is responsible for her own lonesomeness. She may not have intended to end up alone. She may have sought companionship, but her immoral path in life has led her away from true love.

With this contrast, we could truly understand the message of Chazon Yishaiyahu in its relationship to Megillas Eichah and Tish’ah B’Av. On Tish’ah B’Av, we mourn as the Almanah, someone who has tragically lost her loved one. There was a Churban, utter destruction. The images described in Megillas Eichah are frightening and heartbreaking. Ultimately, Hashem allowed it to happen, and we are supposed to be sad over what Hashem has taken from us.

BUT, before we mourn our situation and wallow in wonderment over what we have lost—before we view ourselves as an afflicted Almanah—the Haftarah reminds of what we were before we became an Almanah. We were a Zonah! Before Hashem took everything away from us, we not only exchanged Him, but like a harlot, we sold ourselves away! Yes, Hashem permitted a destruction which, beyond a certain point, we could not control. But, whatever happened to personal accountability? What about the choices which we have made?! We’re not merely alone because Hashem left us alone like a widow, but because, like a harlot, we’ve made decisions in our lives, terrible decisions, which have caused us to be alone!

In this light, while Megillas Eichah asks, “How could it be” that we’ve ended up like a lonely widow, Chazon Yishaiyahu essentially asks, “How could you?!”—How could we have made ourselves into a harlot?! All of the above drives home the deeply frightening image of this “vision,” as we’ve been explaining it, that Chazon Yishaiyahu is not merely a “vision” about the Destruction that befell or will befall Israel in the wake of it exile. It’s a disturbing vision about the moral destruction of the people, the exile which Israel has brought upon itself. It is a vision of what led to the Destruction. It is a vision which reflects that which we’re accountable for, our own moral failings, or our own, self-caused “lonesomeness.”

It is a sad time for Am Yisrael, but as the Navi continues to assure us, it does not have to be. Although at times, it seems as though we are a helpless widow, we are the ones in control of our fate. When the tragic time comes, (and please, G-d, it shouldn’t!), it is certainly appropriate to be upset and wonder, as Yirmiyah does, how it could be that we’ve ended up in such a mess. But, if we truly want to be redeemed from our Galus, we need to consider out personal accountability. We need to think about the “Eichah” of Chazon Yishaiyahu which rightfully asks, “How could you?!” If we’re able to preempt this Shabbos Chazon and take that personal responsibility to ask ourselves the question of “Eichah”—HOW we’ve forgotten who we are, HOW we could have become what we’ve become, HOW we could change ourselves for the better—then, with G-d’s help, we will never have to ask the question of Eichah again.

May we all be Zocheh to take personal responsibility for our actions, faithfully devote ourselves to Hashem, and Hashem should return us all to His Promised Land of Eretz Yisrael, rebuild the Beis HaMikdash, and send us the ultimate Geulah in the days of Moshiach, Bimheirah Biyomeinu, Mamash! Have a Great Shabbos Chazon and meaningful/final Tish’ah B’Av!
-Yehoshua Shmuel Eisenberg 🙂