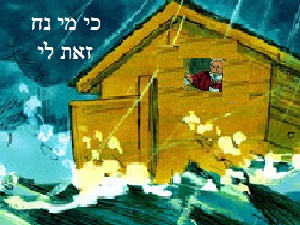 The fifth Haftarah of the Sheva D’Nechamasa (Seven of Consolation), like the third one of the series, revisits the Haftarah from Parshas Noach. While the earlier Haftarah for Re’eih was a review of the second half of Noach’s Haftarah, this Haftarah for Ki Seitzei comes from the first half of that Haftarah [Yishaiyah 54:1-10].

Two Haftaros ago, we discussed how the Noach-esque imagery of a “stormy” exile was relevant to our search for Nechamah amidst exile and why the passage was worth repeating. In that conversation, we elaborated on how its themes fit with well with both Noach and the Sheva D’Nechamasa.

However, this Haftarah, “Rani Akarah” (“Sing, O Barren One”), was clearly made for Noach. As relevant as Noach was to the Haftarah from two weeks ago, Noach is even more significant this week as he is referenced explicitly in the text, as the Navi famously declares [54:9], “Ki Mei Noach Zos Li…”-“For it is [as] the Waters of Noach to Me…” If there is any piece of Navi that belongs in a Haftarah for Noach, this is this one. So, if we had to choose one time to read this Haftarah, Noach would definitely win it. Obviously, our tradition did not limit it to once a year. The question then is why we would repeat the Haftarah, and why here. It must be that it apparently drives home a crucial point about Nechamah. Okay. Well, what does it teach us about Nechamah?

While we think about this question, we should consider the fact that although Noach is present in our Haftarah, he is not exactly “front and center.” Noach’s reference in this Haftarah is really just that; a reference. His experience is used as analogy. Again, the Navi stated, “Ki Mei Noach Zos Li…”-“For it is [as] the Waters of Noach to Me…”

So, the fact that Noach appears in the Navi as an analogy and a reference point shows us that the real subject of the Haftarah is not Noach per se. The subject of this Haftarah is the thing that is being compared to Noach. Yes, “Ki Mei Noach Zos Li…”—but what, exactly, is “[as] the Waters of Noach”? What is the Navi demonstrating by invoking the memory of the Waters of Noach? For what is Noach serving as an analogy?

If we put both of our questions together, what will likely emerge is that our Haftarah is attempting to teach us a perspective about Nechamah using the “Waters of Noach” as some sort of symbol. But if one thinks about it, it is kind of ironic. The “Waters of Noach,” as they are described in the Torah, were quite devastating. The entire world was destroyed. All of mankind and the animal kingdom were blotted out with the exception of one family, the fish, and two or seven of each kind of animal which all survived during the Flood. It was a heavy dosage of unadulterated Divine Justice served to a corrupt and morally debased generation. It was ugly. So, when the Navi comes along to encourage us, it is kind of funny that he attempts to do so with Noach. “Don’t worry, guys. It’ll be like old times! It’s like the Waters of Noach! Cheer up!” The Waters of Noach brought about the greatest physical destruction preceding that of the Beis HaMikdash, and there was no point of recovery for that generation of people! It could not get much worse! The Waters of Noach do not sound all that comforting.

But, the irony goes further. If one thinks about Noach himself, his essence, from his birth, was to be a harbinger of hope and comfort. In fact, Nechamah is a part of his name. When Noach was born, the Torah tells us that his father Lemech called him Noach and declared [Bereishis 5:29] “Zeh Yinachameinu [יְנַחֲמֵנוּ] MiMa’aseinu U’Mei’Itzvon Yadeinu Min HaAdamah Asher Eir’rah Hashem”-“This one will bring consolation from the work and the anguish of our hands from the ground which Hashem has cursed” (the word Noach apparently coming from Nechamah). When Adam HaRishon sinned, Hashem cursed the ground and made agriculture difficult for mankind to navigate. Lemech had hoped that Noach would mark the end of that anguish. Noach was supposed to bring comfort to mankind—supposed to.

But the Torah tells us that in his generation, the opposite happened: “Vayinachem [וַיִּנָּחֶם] Hashem Ki Asah Es HaAdam BaAretz Vayisatzeiv El Libo; Vayomer Hashem Emcheh Es HaAdam Asher Barasi MeiAl Pinei HaAdamah…”-“Thus, G-d reconsidered (regretted) having made man on earth, and He was anguished in His heart. And Hashem said, ‘I will blot out mankind that I have created from on the face of the ground…” [Bereishis 6:6]. And as we’ve mentioned in the past, the Torah uses the same root word for comfort to convey the opposite meaning, regret. Indeed, as we have also mentioned, the root “Nechamah” actually means “reconsideration,” and so, the point here is that in Noach’s generation, where there perhaps should have been comfort, there was only regret.

So, if all of the above is true, Noach does not really come off as a symbol of consolation, but one of destruction and lost hope. Where, then, is the encouraging message of comfort in the Waters of Noach?

So, for just a minute, let’s focus less on Noach and more on the target of this Haftarah. When it comes to the broader text of our Haftarah, the Navi calls out to Yerushalayim [Yishaiyah 54:1], “Rani Akarah Lo Yaladah Pitzchi Rinah V’Tzahali Lo Chalah Ki Rabbim B’nei Shomeimah MiB’nei Ve’ulah Amar Hashem”-“Sing out, O Barren One who has not given birth; break into glad song and be jubilant, you have not experienced birth pangs; For the children of the desolate one will outnumber the children of the inhabited one, said Hashem.”

The Navi is addressing a childless and desolate land. Indeed, Yerushalayim in its destruction was like the lonely world which Noach returned to from his boat ride; empty and bereft of a generation of its children. And the Navi tells this desolate land that it would one day bear children, more than those of any other land. The Navi then continues with this theme, urging Yerushalayim to broaden itself for the overflow of children. The Navi assures Yerushalayim that although she was once forsaken, Hashem would ultimately show her eternal kindness, mercy, and redemption.

And here comes the Noach reference. In its entirety, the Navi tells us [54:9], “Ki Mei Noach Zos Li Asher Nishbati MeiAvor Mei Noach Od Al HaAretz Kein Nishbati MiKtzof Alayich U’MiG’ar Bach”-“For it is [as] the Waters of Noach to Me; just as I swore that the Waters of Noach would never again pass over the earth, so do I swear not to be wrathful with you nor to denounce you.”

With this broader picture, we can begin to understand where the Navi is coming from. As we’ve mentioned earlier, Noach’s story does not appear to be one of hope and comfort, but of failure. The Waters of Noach were terrible. Indeed, so is Hashem’s wrath in every generation, no less during the exile of our people. And when Hashem’s wrath strikes, there are souls that unfortunately get cut off. That is the nature of Divine Justice; if you sin and corrupt Hashem’s world, you lose. And the Navi does not by any means attempt to downplay the gravity of these destructions. However, when these destructions come, explains the Navi, eventually, they go. And when they go, one day, they will be gone once and for all. It will be as Hashem had promised Noach. There will be a time where destruction will forever cease. That is something that we can all look forward to.

Now, one might ask: “Who cares that He won’t do it again? What about all that was already lost? It happened!” You’re right. It is quite tragic. And Noach witnessed such a loss firsthand, perhaps the world’s greatest loss. But Hashem did not merely promise Noach that He would not allow it to happen again, but Hashem also commanded Noach to get up and rebuild. The world as we know it is product of that new generation, that rebuilding. The Avos, the Shevatim, Moshe Rabbeinu, Dovid HaMelech, and eventually, Moshiach Tzidkeinu all descend from this rebuilding. Each of these pillars whom we could not imagine our history and future without entered the scene no earlier than this new stage in time! There was a rebuilding!

This idea of rebuilding precisely the lesson of R’ Akiva’s triumphant “recovery” on Lag BaOmer. Yes, all of his students died—there was not a single one left. But, R’ Akiva picked himself up and rebuilt, taught new students who were greater than any of the others and became the leading teachers of our Torah SheBa’al Peh (Oral Law).

And again, none of these points mean to suggest that the destruction did not happen or that it was not terrible! It did and it was! But, Nechamah, as we’ve explained throughout this series, does not mean to change the results of that destruction! What happened happened. And now, we are in a state of utter desolation. We are bereft, essentially childless. But, explains the Navi, we will rebuild and be greater, we will be more than we were before. That will only happen though when we allow ourselves to be comforted over what happened in the past and actually pick ourselves up to build a better and brighter future.

If we can take this message to heart, we will no longer wallow in desolation and grief over that which is lost. Instead, we will derive the intended Nechamah from the Waters of Noach, pick ourselves, bear lasting fruits, and ultimately rebuild.

May we all be Zocheh to continue to find Nechamah despite our Galus, pick ourselves up, bear lasting fruits, and ultimately rebuild the Beis HaMikdash with the coming of the Geulah in the days of Moshiach, Bimheirah Biyomeinu! Have a Great Shabbos!
-Yehoshua Shmuel Eisenberg 🙂