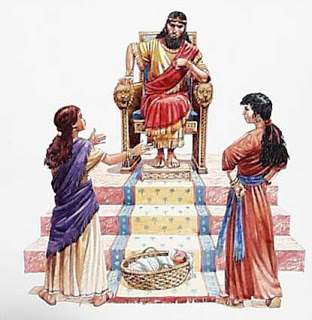 This D’var Torah is in Z’chus L’Ilui Nishmas my sister Kayla Rus Bas Bunim Tuvia A”H, my grandfather Dovid Tzvi Ben Yosef Yochanan A”H, & my great aunt Rivkah Sorah Bas Zev Yehuda HaKohein in Z’chus L’Refuah Shileimah for:
-My father Bunim Tuvia Ben Channa Freidel
-My grandfather Moshe Ben Breindel, and my grandmothers Channah Freidel Bas Sarah, and Shulamis Bas Etta
-Miriam Liba Bas Devora (urgent)
-Mordechai Shlomo Ben Sarah Tili
-And all of the Cholei Yisrael
-It should also be a Z’chus for an Aliyah of the holy Neshamah of Dovid Avraham Ben Chiya Kehas—R’ Dovid Winiarz ZT”L as well as the Neshamos of those whose lives were taken in terror attacks (Hashem Yikom Damam), and a Z’chus for success for Tzaha”l as well as the rest of Am Yisrael, in Eretz Yisrael and in the Galus.

“The Test of Family”

As uncommonly read as it is as a Haftarah, the section itself is a famous one, taken from Melachim Aleph [3:15-4:1], the story of Shlomo HaMelech and the two Zonos (harlots) who were fighting over the one living baby. The Haftarah picks up after Shlomo’s dream where Hashem offers him whatever he wishes, and Shlomo requests wisdom. When Shlomo awakens, he finds two female litigants contending for the custody of a single baby, each one arguing that the dead baby belonged to the other, and that the live baby belonged to her. Shlomo famously orders his men to bring him a sword and declares that the following compromise: The baby would be cut in half so that each can receive half a share. Of course, the woman who refused the compromise and offered away the child to spare the child’s life was deemed the child’s real mother. Wonderful story.

Now, what does this story of Shlomo HaMelech’s wisdom have to do with Parshas Mikeitz?

There are some decent surface connections between Mikeitz and Shlomo’s story that have been offered; for example, both sections begin with kings who wake up from dreams, in Mikeitz, it was Pharaoh. But if the dream factor was the main connection, then Shlomo’s dream should have been included, and in fact it’s not, suggesting that in the Haftarah, the dream is of minimal significance. Moreover, our Sidrah is hardly about Pharaoh.

So, some point at the perhaps better parallel between Shlomo and Yosef, both who ruled kingdoms and displayed great wisdom. Maybe… As it happens though, the most obvious part of Mikeitz which highlights Yosef’s wisdom is perhaps found in the beginning when Pharaoh praises Yosef after Yosef interprets his dreams and provides a solution to the nation’s problem. Pharaoh raves about Yosef’s ingenuity. But even that aspect of Mikeitz is hardly the theme of Mikeitz. The bulk of the Sidrah is devoted to the story of the famine when his brothers descend to Egypt. The point is that although the wisdom of the respective rulers, Shlomo and Yosef, is certainly part of the story, Mikeitz is about so much more than that. So, is there more to this relationship between the larger story of Mikeitz and that of Shlomo’s court case?

And the answer, if one looks closely at the larger story Mikeitz, is an astounding “Yes.” Yosef does demonstrate some of his wisdom before Pharaoh, but his true genius comes out in the larger story of Mikeitz, during the famine, when Yosef sees his brothers once again.

Yosef, unrecognized by his brothers, puts on a charade and displays some strange behavior. He interrogates them carefully and persistently, accusing them of being spies, takes Shim’on as hostage, and orders that they bring their remaining brother Binyamin down to Egypt. Then, he returns their money without their realizing. The brothers are disturbed and confused, and if we’re following the flow of the story, we should be too. Why is Yosef doing all of this? If he wants to harm them, he can. But if he wants to help them—for example, by returning their money, he can do that too without the “mean” charade. What is Yosef trying to get out of all of this? Moreover, a more famous question that is asked is why Yosef did not immediately reveal himself and ask to be reunited with his father.

Apparently, Yosef wasn’t ready to go back yet. Some suggest that Yosef did not truly know if his father was alive and if his father even wanted to see him again. Yosef did not know if his father was in on the brothers’ plan to get rid of him which is why Yosef asked them so many questions about their family. But, if that’s all true, which it might partially be, why does Yosef lock Shim’on in prison and order the brothers to bring down Binyamin? Apparently, he needed to somehow assure that his brothers would come back to him with Binyamin. Why? Did he just want to see his maternal brother again? What about his father?

When we get to the end of Mikeitz, we learn why Yosef wants Binyamin down there. Yosef’s strange behavior continues as he plants his goblet in Binyamin’s sack in order to frame him as a thief and sentence him to a lifetime as a slave. Why, though? Why would Yosef frame the innocent Binyamin? The only possible reason for doing that was that he was trying to gage people’s reactions. What kind of reaction was he looking for?

The answer is undoubtedly that Yosef was looking to see if his brothers would stand up for Binyamin even if they thought he was guilty or if they would instead repeat their earlier sin of selling their brother away as they had once done to Yosef years ago.

Aside from Yosef, Binyamin was the only remaining son of Rochel. We know that there was heat between Yosef, the firstborn of Rochel, and his half-brothers, mothered by Leah. The bitter rivalry was the cause of Yosef’s sale. Yosef wanted to see the end of that feud. So, what did he do?

Well, Yosef knew that his brothers would return for Shim’on, a fellow Ben Leah. But, how would they react when Binyamin was taken? Had they done full Teshuvah (repentance)? Will they now see their father’s son as their own brother or not? This charade, this test, was the story of Mikeitz.

And in fact, that is the story of Shlomo HaMelech and the Zonos! Shlomo HaMelech devises a plan—a test, a charade—in which he puts a baby in harm’s way, all for what? Because he is trying to see the truest form of motherly love and mercy come pouring out of one of these two women, to see where the true, unmistakable love lies. Wherever the true familial love would be, Shlomo would find a mother who is willing to sacrifice herself—her own custody of the child, for the sake of that child!

When push came to shove, in the beginning of Parshas Vayigash, Yehudah as well, would sacrifice himself in order to spare Binyamin. Yehudah would thereby demonstrate true repentance and brotherhood before Yosef!

So, when we look at them again, the theme and deeper connection between the Sidrah and Haftarah is incredible. Both tell the stories of two brilliant monarchs on a serious mission in which they devises a plot of some sort to determine if the defendants in question truly possess the attributes of altruism and self-sacrifice when it comes to the well-being of a family member, loved or not. And even though the Haftarah is always read, if we miss this theme, we’ve missed Parshas Mikeitz.

The lesson being highlighted is clear and crucial. If there is love, then there is family. And Klal Yisrael is supposed to strive to be a true family, despite the differences between the individuals within it. Parental love is natural and easy. Love between half-siblings of rival mothers is a little bit more challenging, but it is absolutely necessary if we want to succeed as a people, all children of one Father in Heaven. We have to develop an altruistic sense of familial love and be ready to make sacrifices for each other. If we are willing to act brotherly towards the sons of our Father, the King will treat us favorably.

May we all be Zocheh to truly become family, make sacrifices for one another, develop sincere brotherly love for one another, show that we share One Father, and then Hashem should redeem our entire family of Klal Yisrael in the days of Moshiach, Bimheirah Biyomeinu! Have a Great Shabbos Chanukah/Mevarchim Teiveis!
-Josh, Yehoshua Shmuel Eisenberg 🙂