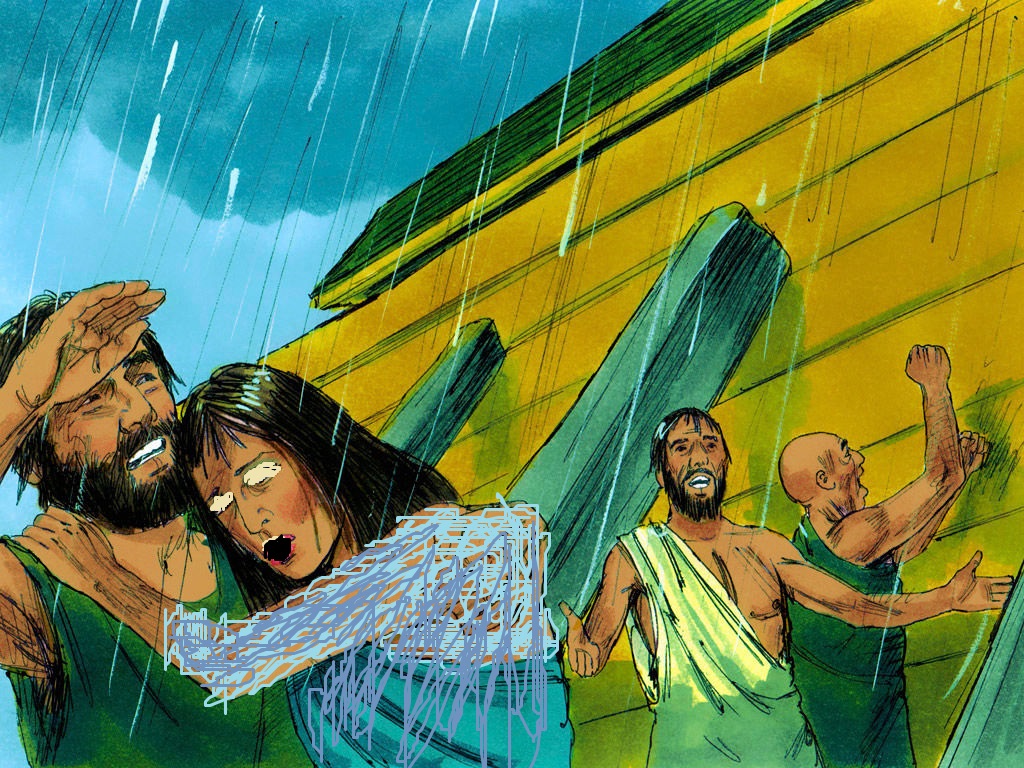 Moving over to the third Haftarah of the Sheva D’Nechamasa (Seven of Consolation), we reach the passage known as “Aniyah So’arah” (“Afflicted, Storm-Tossed one”) [Yishaiyah 54:11-55:5].

This Haftarah really should be somewhat familiar as half of it was read earlier in the year as the Haftarah for Parshas Noach. With that said, one might wonder why it was necessary to repeat a Haftarah (or parts of a Haftarah). There is certainly no shortage of passages in Navi that we needed to recycle an old one for this week. It must be then that somehow, our passage of choice was just perfectly apropos for both occasions on which they’re read. The question is: How? What about this Haftarah makes it a perfect choice of reading for both for Noach and the Sheva D’Nechamasa? And is it at all possible that Parshas Noach and the period of Nechamah share any fundamental themes in common?

To answer these questions, we have to obviously visit the text to see what exactly this Haftarah is about. The Navi begins describing the land of Yerushalayim amidst its state of exile [Yishaiyah 54:11], “Aniyah So’arah Lo Nuchamah…”-“Afflicted, storm-tossed one, who is not consoled…”

The imagery conveys the feeling of easily relatable discomfort; being caught in a storm, afflicted by the ravaging winds and rain. How any of this is relevant for Parshas Noach is easy to understand, considering the most literal storm and discomfort Noach was forced to endure. But, how about for our purposes, the Sheva D’Nechamasa?

So, if one thinks about it, this concept of “Aniyah So’arah” might teach us an unfortunate reality that exists and often hinders the Nechamah process. That reality is the “storm-like” nature of our exile. Yes, life has its pleasant times and its distressful times. But, sometimes, the distresses become so overwhelming they are like a storm. And when in that storm, nothing else really matters. Whether you had been looking forward to pleasant and exciting news or dreading some future distress, while you’re in that storm, all of that is forgotten and you just want to take cover to relieve that discomfort. You just want to breathe. You don’t care about the material luxuries of the world. You’re not asking for a fancy new car, a vacation to Hawaii, or anything like that. You just want serenity. You just want a simple life. You just want comfort. But of course, when the storm rages on—when we are “Aniyah So’arah,” then “Lo Nuchamah”—we cannot attain that simple comfort.

And the question becomes: How, amidst the storm, are we supposed to achieve that Nechamah? In the past, we mentioned that Nechamah, more than comfort or consolation, really means reconsideration, so that although the situation itself has not changed, Nechamah should allow us to reconsider how we relate to the unfortunate situation so that we can cope and move forward. But, if we’re still in the storm, how to we get there? Call it what you want—Nechamah, consolation, reconsideration—we want nothing more than that while we’re in the storm. But, unfortunately, the merciless storm waits for no one. That is how our Galus often feels. And, then what?

If we take these words at face value and consider everything we’ve said until now, they should be kind of shocking. Hashem, through the Navi, seems to promise to rebuild Yerushalayim with all of these elegant, precious gemstones. Yes, it sounds quite beautiful, and in some ways, reassuring, but at large, it seems to be quite beside the point. We’re looking at a land “in distress,” tossed back and forth by a storm. We’re looking at a seemingly unending discomfort, where all the afflicted one wants is to not be afflicted, to be taken out of the storm and into shelter. Nothing else matters. We just want comfort. And here is the Navi promising palaces of ruby and sapphire.

With the sincerest due respect, that does not sound like what the exiles are longing to hear. Yes, the luxuries are a nice thing—a wonderful thin—to look forward to. But, we really just want one thing beyond anything else. We want comfort! We want guaranteed serenity! We’re not so greedy and out of touch with reality to suggest that Hashem should give us material riches, an all-you-can-eat banquet, or a mansion with a pool. And when we’re being tossed back and forth by the storm, we’re not even thinking about any of that stuff anyway. We just want to be protected. We want the threat to go away. We want our families to be safe and healthy. We want the bare necessities to be met. We want to simply be told with certainty that everything is going to be okay. And when the Navi, in one breath, acknowledges the storm-like exile but then starts fantasizing about this utopian city of jewels, it seems almost as if, Chas Va’Shalom, the Navi does not understand what the exiles are truly going through. Yes, it’s a nice reward for all of our troubles in exile, but if we had the honest choice, we would decline the luxuries of the future if we could end the storm now. In fact, Chazzal themselves, when asked their preference, felt this very way as they declared “Lo Hein V’Lo S’charan”-“[I prefer] neither them [the sufferings] nor their reward” [See Brachos 5B].

So, the question is now twofold. Firstly, how to we reach that point of Nechamah while we’re yet being tossed by the storm? And secondly, why doesn’t the Navi simply tell us what we want to hear, that this storm will come to an end. Tell us that there will be peace at the end of all of this. Why, instead does the Navi elaborate on the beautiful palace that Hashem wants to build?

If one continues the Haftarah, the Navi ultimately does eventually talk about the security and peace for which we long. In fact, in the very next verse, the Navi declares [54:13], “V’Chal Banayich Limudei Hashem V’Rav Shalom Banayich”-“And all of your children will be students of Hashem, and the peace of your children will be abundant.” And from that point, the Navi continues on this route of serenity, suggesting that “panic” will not come close to us [54:14], that we have nothing to fear [54:15], and that no weapon that is sharpened against us will succeed [54:17]. The Haftarah even continues into the next Perek where the Navi tells us that anyone who is need of any food and water will be provided it, free of charge [55:1-2].

So, in the end, we are in fact told that everything will be okay. But again, it does still seem strange and slightly “out of touch” that the Navi began its “consolation” with a description about this lavish palace that Yerushalayim will become. Why is this information so necessary that we had to hear it first? As we’ve already explained, it’s hardly what we want to hear. We don’t want to be told how amazing it will be, but rather that it should just end and be simple.

However, it must be that as “out of touch” as this prophecy may seem, it is most likely we who are missing something. Yes, for us, the hope and perhaps ideal is not the utopian magnificence that the Navi is describing, and as “victims” of the “storm,” we really do just want peace and comfort, reasonably so. BUT, it could be that at the same time, we have to realize that, in fact, there is a higher ideal that Hashem has in mind.

Yes, we want to the storm to end, and with G-d’s help, says the Navi, it will end! There will be comfort. BUT, as much as we really just want serenity and would trade even the “luxuries” of the future for the serenity to come now, Hashem knows better and has decided that the storm will continue longer because that luxurious reward to come is apparent worth it. Yes, as logical and sane humans, we prefer “Lo Hein V’Lo S’charan,” but the reward of Hashem’s ideal world is so immeasurable, it outweighs the ravages of our stormy Galus beyond any limits. So, while we’re hoping for an end to the storm, Hashem tells us not to shoot so low, but in fact, to yearn for a utopia that only Hashem can bring—because, in fact, that is what Hashem is guaranteeing us.

It seems as though for now, the storm must continue—but hopefully not for so long. Regardless, in the end, we will get through this storm. It will end, and we will have not only the long awaited comfort, peace and serenity, but we will have immeasurable bounty, luxury that we cannot begin to comprehend. The current discomfort might continue but it is limited and will yet be revealed to be the ultimate bargain deal when Hashem hosts us in His finished palace. We just have to hang in there.

May we all be Zocheh to not only stick it out through the stormy Galus and be Zocheh to see its ultimate end and the serenity to follow, but we should be Zocheh to experience Hashem’s ideal world with the endless reward in the times of the Geulah and the coming of Moshiach, Bimheirah Biyomeinu! Have a Great Shabbos Rosh Chodesh Elul!
-Yehoshua Shmuel Eisenberg 🙂