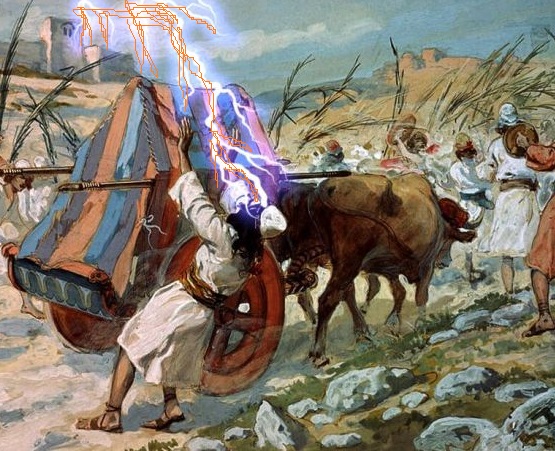 This D’var Torah is in Z’chus L’Ilui Nishmas my sister Kayla Rus Bas Bunim Tuvia A”H, my grandfather Dovid Tzvi Ben Yosef Yochanan A”H, & my great aunt Rivkah Sorah Bas Zev Yehuda HaKohein in Z’chus L’Refuah Shileimah for:
-My father Bunim Tuvia Ben Channa Freidel
-My grandfather Moshe Ben Breindel, and my grandmothers Channah Freidel Bas Sarah, and Shulamis Bas Etta
-Mordechai Shlomo Ben Sarah Tili
-Noam Shmuel Ben Simcha
-And all of the Cholei Yisrael
-It should also be a Z’chus for an Aliyah of the holy Neshamos of Dovid Avraham Ben Chiya Kehas—R’ Dovid Winiarz ZT”L, Miriam Liba Bas Aharon—Rebbetzin Weiss A”H, as well as the Neshamos of those whose lives were taken in terror attacks (Hashem Yikom Damam), and a Z’chus for success for Tzaha”l as well as the rest of Am Yisrael, in Eretz Yisrael and in the Galus.

As the climax of Parshas Sh’mini is undoubtedly the deaths of Aharon HaKohen’s sons Nadav and Avihu resulting from their controversial Avodah in the Mishkan, the similar story of Uzah’s death in Shmuel Beis [6:1-7:17] certainly makes for an appropriate Haftarah. The stories and their implications parallel each other brilliantly.

On a simple level, the deaths in both stories are difficult to understand as the casualties in both were righteous individuals who acted out of pure passion for Hashem. Nadav and Avihu felt a spiritual compulsion to get close to Hashem and serve Him in the most intimate way possible. In Shmuel Beis, Uzah was emotionally stirred when he thought the Aron HaKodesh was going to fall so he grabbed onto it.

The question asked in both stories is how it could be that someone could falter and bear such blame when his actions are clearly motivated by pure Ahavas Hashem. Uzah’s tragic death is even harder to digest than those of Nadav and Avihu, as Uzah was trying to protect the Aron from falling. Where, in such an action, could there even be the slightest impure thought?

However, the parallels between the stories can shed an important light on the exact misstep of Uzah, and further teach us an important lesson about Avodas Hashem as it is expressed in the Sidrah. The issue of Nadav and Avihu and that of Uzah, are one in the same. Yes, all of them acted in response to their sensitivity and passion in their respective relationships with Hashem. It was all for the love of G-d. But, Nadav and Avihu, and similarly Uzah, apparently got “too close” to the fire and were burned. There was a certain boundary that was crossed. In the case of Nadav and Avihu, as tragic and perplexing as it undoubtedly was, on a certain level, we can understand the result. They performed an unauthorized service, a bold service which they thought their relationship with G-d needed, but which G-d Himself never sanctioned. Their hearts were completely in the right place, and so was Uzah’s. But, love for G-d and all that is holy must be channeled by a profound awe and reverence of G-d’s sanctity. There needs to be Yirah. As difficult as it is accept, apparently, even Uzah’s grasping of the Aron which was done completely in the name of what he thought was the Divine interest was a “breach” of the boundary (which is why the land was named “Peretz-Uzah,” literally “breach of Uzah” [6:8]). Perhaps Uzah thought that G-d “needed” his “heroism,” despite the fact that Chazzal tell us that the Aron could miraculously carry itself [Sotah 35A]. The point is that despite his heart being in a high place where perhaps no one else’s was, the requisite hesitancy before the Divine Presence that everyone else seemed to have at the time was what apparently what Uzah lacked.

My brother (R’ Daniel Eisenberg) points out that when the Aron HaKodesh was being escorted to Yerushlayim, it was taken out from the house of Uzah’s father, a man by the name of Avinadav, a contraction of their Kohanic predecessors, Nadav and Avihu, perhaps an allusion to this point that Uzah’s perplexing death is really the continuation of the tragedy of Nadav and Avihu.

The relationship between these stories and their lessons for us can be understood. The question though is why the Haftarah does not just stop there. For some reason, the Haftarah continues to elaborate on the Dovid HaMelech’s procession for the Aron, a few months later, and his subsequent request to build the Beis HaMikdash for Hashem. Apparently, the story is not finished, but, why not?

So, as we’ve explained in the past, while the Haftarah will often reinforce the theme of the Sidrah, it often compliments or fine-tunes the Sidrah with a message which, at first glance, seems contrary to the theme of the Sidrah. For example, while Parshas Tzav is about the procedure for the Korbanos, its Haftarah from Yirmiyah, on some level, challenges the notion of Korbanos. The point, however, was not to undercut the Sidrah’s theme of Korbanos, but to put the Sidrah’s theme into perspective and give us a more sophisticated understanding of what we’re trying to accomplish with Korbanos.

Our Haftarah serves both purposes. On the one hand, the story of Uzah in Shmuel Beis reinforces our understanding of the problem with “too much” passion and love. It reminds us that there are boundaries in Avodas Hashem. However…

Then we reach the story of Dovid and Michal. The procession for the Aron continues, as we’ve explained, and the Navi elaborates on the extent of Dovid HaMelech’s celebration, how he danced with all his might, to his wife Michal’s utter disapproval. What was her problem? She argued that he was “exposing” himself, that he was not carrying himself with the honor befitting the royalty that he was. And if all we know is the story of Nadav and Avihu, and Uzah, we might suggest the Michal was correct. Perhaps Dovid was crossing a line with his passionate dancing. The Navi however indicates that Michal was not correct as not only is Dovid is awarded the final word, but as Hashem withholds seed from Michal until the day of her death. Why was Michal incorrect in her thinking? As Dovid retorts, his dancing was purely for Hashem and that if his personal passion for Hashem means being demeaned, so be it.

Now, at first glance, this sounds like the opposite message to that of the deaths of Nadav, Avihu, and Uzah. They all acted out of pure love for Hashem and were killed. However, if we understand the key difference between all of them and Dovid, we’ll have a richer understanding of the best pathway to Avodas Hashem.

When it came to Nadav, Avihu, and Uzah, their Ahavah was not the intrinsic problem, but their lack of Yirah. Their Ahavah was one hundred percent on target, but, as we’ve explained, without Yirah, boundaries are crossed and breaches are made. Indeed, it is not Ahavah, but healthy Yirah that keeps us in line with Avodas Hashem. We cannot volunteer a service with the thinking that Hashem needs something from the relationship with us if that service will run contrary to His Will, to the Yirah that we’re supposed to have. That is why, at the end of the Haftarah, the Navi tells us that Hashem was sure to remind Dovid that He does not need a house for Himself [7:4-9]. Hashem doesn’t need anything. Therefore, one must not overstep the boundary of Yirah. That, we understand from the tragic mistakes of Nadav, Avihu, and Uzah.

But, so long as your actions are in line with that Yirah, i.e. they are not contrary to Hashem’s Will as reflected by the Torah and the Mesorah (tradition)—so long as they are channeled by the sensitivity to Hashem’s unfathomable loftiness, one should maximize the Ahavah as much as possible. Because, so long as one’s Ahavah is not flying in the face of Hashem’s Will, it is no one’s place to demand anyone to limit his or her expressions of Ahavas Hashem. Dovid’s expressions of love for Hashem had simply crossed no lines. And although we have room to condemn Nadav and Avihu for the practical misstep that they took, in terms of Ahavah itself, we have everything to learn from them in that area as well. That is what Michal got wrong, and that is the lesson we can take from the dancing of Dovid HaMelech.

Balance is a difficult thing to achieve in any area of life, all the more so, in Avodas Hashem, but we have to try. And we can strike that balance if we understand that Ahavah and Yirah are not mutually exclusive, and that both are necessary. We have to be inspired by the passion of Nadav and Avihu, but respect the boundaries. If we’re doing that, we cannot be demeaned for our dancing for the love of G-d.

May we all be Zocheh to serve a healthy balance of Ahavah and Yirah—to approach Him with the fullest extent of fiery passion, yet a hesitance and awe at the boundary marker, and Hashem should accept our service favorably, and Hashem should show us that same outpouring of love in the days of Moshiach, Bimheirah Biyomeinu! Have a Great Shabbos!
-Yehoshua Shmuel Eisenberg 🙂