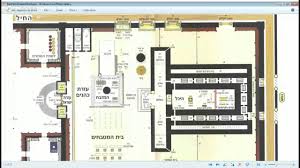 “Mishkan Series – Stage I: The Blueprints”

Parshas Terumah begins what we will refer to as the “Mishkan Series.” From Parshas Terumah until basically the end of Sefer Shemos, the Torah devotes most of its time and space to drawing out the blueprints and describing construction of the Mishkan, or the “dwelling place” for Hashem’s Presence.

One of the issues that is commonly raised in regards to the Mishkan Series would be the seeming verbosity or redundancy in the Torah’s presentation of it. There are a lot of intricate details that are taught multiple times making the Parshiyos that much more difficult to follow, and as a result, it is often challenging to identify what new themes or ideas each Sidrah in the Mishkan Series is adding to the previous ones. And if they’re not adding anything new, they are literally just taking up space.

Luckily, for our purposes, this Mishkan Series is more or less reflected in the Haftaros as well, for with the exception a couple of Sidros (Parshas Tetzaveh and Parshas Ki Sisa), for the next few Sidros, we have a group of Haftaros which are taken from different segments of the same apropos section of Navi, the building of the first Beis HaMikdash which served the same functions as those of the Mishkan [Melachim Aleph 5-8]. So, through the Haftaros for Parshas Terumah, Parshas Vayakheil and Parshas Pekudei, we might be able to pinpoint the unique stages of the Mishkan Series.
With that, Parshas Terumah marks stage one of the Mishkan Series. What exactly do we need to know for stage one? Stage one needs to be the foundation of the Mishkan. So, what’s the first thing we need to know about the Mishkan?

The Haftarah basically begins the Mikdash Series by telling us that Shlomo HaMelech ordered a tax collection for the cause [5:27] which almost directly parallels to the beginning of Parshas Terumah when Hashem tells Moshe to collect a Terumah, literally, an “uplifted” portion, from the people [Shemos 25:2]. As the Haftarah continues [Melachim Aleph 6:2-10], the Navi proceeds to outline the blueprints of the Mikdash as we would expect. Okay, fine. So, stage one first tell us that for a Mishkan/Mikdash, we need money and blueprints, all of which are also highlighted in Parshas Terumah. We’re off to a good start.

But, before it actually gets to the blueprints of the Mikdash, the Navi interestingly informs us that this construction took place in the four hundred eightieth year since the B’nei Yisrael had gone forth from Egypt [Melachim Aleph 6:1]. So, the first question we might ask is why, as interesting a fact this is, do we need it on record? Who is counting anyway, and what does this project have to do with the Exodus which took place generations earlier?

Before we can answer this question, we have to address a more fundamental question, and that is what the real purpose of the Mishkan was. This question is pressing, because, at first glance, the Mishkan project is a strange one. For some odd reason, we are being commanded to make financial contributions and provide costly materials to build a physical building, a house, in which the unlimited and infinite G-d is supposedly going to live. If G-d Himself didn’t command it, we’d think that this was some kind of political, governmental scam. G-d doesn’t need a house to live in! He doesn’t have a body. We made fun of the generation that tried to build a tower to fight the intangible G-d, didn’t we? Yet, we’re paying loads of money to build the same intangible G-d a house. And even if we accept the fact that we’re doing the right thing by building this “house” for G-d, there’s a lot of money going into this project—gold, silver, etc., perhaps more than an unlimited and intangible G-d should require.

So, as far the purpose of the Mishkan and the Mikdash is concerned, our assumption has been that the point of the house is for G-d to dwell in it. However, if you look closely, the Torah spells out the goal for us slightly differently [25:8]; “V’Asu Li Mikdash V’Shachanti Besocham”-“And you shall build Me a Temple and I dwell in them.” It sounds the same, but there’s a subtle difference.

Now, there is a famous observation of the Alshich that the Torah does not say “V’Shachanti Besochah”-“And I will dwell in it,” but rather, “V’Shachanti Besocham”-“And I will dwell in them,” which teaches us that the B’nei Yisrael themselves need to make themselves into holy sanctuaries so that G-d could dwell inside each of them individually. The idea is a beautiful one and, one hundred percent, a very true one at that, but we actually need don’t need to go that far to understand the simplest reading of this verse. “V’Shachanti Besocham” literally means G-d would dwell, not specifically in the Mishkan, but among the people, as the word “B’soch” means “among” or “in the midst of.” “Besocham” therefore means “among them.” In other words, this project is not about stuffing an oversized G-d into a doll house, but about Hashem’s otherwise intangible Presence being present among the B’nei Yisrael. If it’s not clear enough from the verse in our Sidrah, our Haftarah says it more specifically [Melachim Aleph 6:13]; “V’Shachanti B’soch B’nei Yisrael”-“And I will dwell among the B’nei Yisrael.” The point is that we are physically toiling toward a goal to allow G-d in our midst, not necessarily by literally “making room for Him”—that’s not possible, but by uplifting our physical selves and our physical assets to create a pure haven where G-d will allow Himself to be contacted even in this physical world. Again, it’s not because He wouldn’t fit otherwise, but because there would otherwise be no physical body or location in the world pure enough and spiritually devoted enough for G-d to allow His spiritual Presence to rest there. It’s not for Him, but for us. Thus, the Mishkan process is an effort to demonstrate devotion and desire of physical beings to utilize physical materials to transcend and enable themselves to summon G-d to be with them in the physical world. The whole project is a novelty.

But, all of that explains why we need to spend money, time, and personal toil to build the structure. It explains why we need blueprints and a tangible project. G-d wants us to relate to Him, not by being angels, but by uplifting our physical lives, using what we have already—our money and raw materials—to serve Him.

Now, what does all of this have to do with the Exodus? Why did the Navi need to tell us what year from the Exodus in which the building of the Beis HaMikdash took place?

The answer to this question is essential, not just for our understanding of the Mishkan Series itself, but the role of the Mishkan Series in terms of its impact on the larger story of Yetzias Mitzrayim. Moreover, it is essential for our understanding of our goals as a nation yearning for a new redemption from our current exile.

Why do we need to know exactly when the Beis HaMikdash was built in relation to the Exodus? Perhaps, for the same reason that the Mishkan Series was placed in Sefer Shemos. The Ramban famously explains that that Sefer Shemos, known appropriately by Chazzal as Sefer HaGeulah, the Book of Redemption, would be incomplete without the every last detail of the Mishkan Series, because redemption did not by any means end with the physical Exodus from Egypt. It ended with our spiritual liberation when we were able to not only purify ourselves so that we could receive the Torah, but when we could elevate our physical selves and build, not just a building, but a reality in which a spiritual G-d would allow Himself to dwell among us.

Yes, the Geulah would be complete, but it would only be short lived and eventually lost in the mess we’ve created throughout our history—from the Golden Calf, to the Sin of the Spies, to the worship of Ba’al Pe’or, to generations of idolatry in the times of the Shoftim. Thus, our Haftarah tells us that through the building of the first Beis HaMikdash, we revisit our Geulah, our Exodus from Egypt! Even if it would be four hundred eighty long years later, we would see a hopefully “permanent” Mikdash. Thus, our Haftarah says [Melachim Aleph 6:13]; “V’Shachanti B’soch B’nei Yisrael V’Lo E’ezov Es Ami Yisrael”-“And I will dwell among the B’nei Yisrael, and I will not abandon My nation Yisrael”—that as long as we allow Him in our lives, Hashem will not abandon us again! As long as we continue to make ourselves—our physical selves on this physical world—a place for G-d, as long as we don’t chase Him away, He will not abandon us.

Aside from the raw materials and technical blue prints, we need have this goal in mind throughout the process, the spiritual blueprint which makes the Mishkan and Beis HaMikdash what it needs to be.

Of course, we know that we’ve been through a Mishkan and two Batei Mikdash since our Exodus. We haven’t been able to maintain the lofty goal of creating a transcendent reality in the physical world. So, the goal is every bit as much ours as it was theirs. It sounds challenging, but, it really is a goal that is in our reach. Because, again, we are not being asked to make ourselves into something we are not and be angels. We can’t do that. But, we can and must take our physical selves and apply the assets we have towards Avodas Hashem. We have done it before, and we can do and will do it again with G-d’s help. But, we have to want it. We have to apply ourselves. And when we do, we will revisit our Exodus and Redemption no matter how many years later. We will create a permanent dwelling for Hashem in this world, and Hashem will not leave us again.

May we all be Zocheh to make ourselves into fitting vessels for Hashra’as HaShechinah (Resting of Divine Presence) and have Hashem dwell among us once again and never to abandon us, with the building of the third, final, and permanent Beis HaMikdash in the days of Moshiach, Bimheirah Biyomeinu! Have a Great Shabbos a Gutten/Freilichin Chodesh Adar!
-Yehoshua Shmuel Eisenberg 🙂