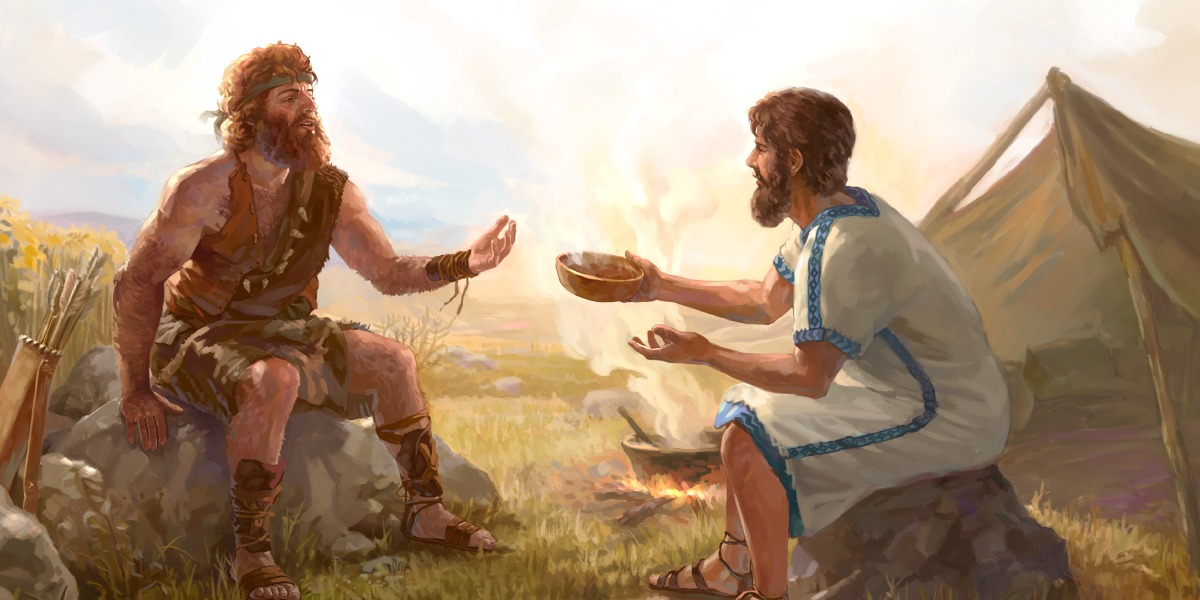 Since Parshas Toldos focuses on the diametrically opposed brothers, Yaakov Avinu and Eisav HaRasha, it seems appropriate that the prophecy of Malachi [1:1-2:7], which depicts Hashem’s love for Yaakov and hatred for Eisav, would be chosen as the Haftarah selection for Toldos. You can’t go wrong with that. The connection is fair and obvious.

The question though is how the prophecy of Malachi tells us about this rivalry of Yaakov versus Eisav. Why is Malachi referencing the sibling rivalry in the first place and what does he want us to learn from it?

If we give the text a look, it will become apparent that the content of this prophecy, more than just a shout-out to the contrast between Yaakov and Eisav, is a demonstration of this spiritual significance of this “rivalry” and its implications for the nation that claims to be the seed of Yaakov.

The Navi refers to this prophecy as a “Massa” [מַשָּׂא] [Malachi 1:1], literally, a burden, because the contents of the prophecy are emotionally difficult for Malachi to convey. Whenever the Navi introduces a prophecy as a “Massa,” it means some kind of “bad news” for its recipient, and here, the Navi specifies, “Massa D’var Hashem El Yisrael…”-“A burden, the word of Hashem to Yisrael…” So we have to wonder: What did Yisrael do wrong?

Thus, the prophecy begins with the following conversation [1:2-3]:
“Ahavti Es’chem Amar Hashem V’Amartem BaMah Ahavtanu HaLo Ach Eisav L’Yaakov Ne’um Hashem VaOhav Es Yaakov; V’Es Eisav Saneisi…”-“‘I loved you,’ Hashem said, but you said ‘With what have You loved us?’ ‘Is Eisav not the brother of Yaakov?’ says Hashem, ‘and I loved Yaakov; yet, Eisav, I hated…’”

What exactly is going on here? So, it seems that Hashem is upset as Israel challenged the fact that He truly loved them, to which Hashem basically responds “I don’t get you people. There were two brothers, Yaakov and Eisav. I loved Yaakov and I hated Eisav.”

At first glance, Hashem’s response is really strange. Certainly, G-d could have gone into an elaborate description of all the good that He has done for Israel to demonstrate His love for them, a response which would have directly answered Israel’s challenge, “With what have You loved us?” But, that’s not what He does. Instead, He proceeds to contrast Yaakov from Eisav. And how does that prove anything? How is it even a response to Israel’s challenge? This is not to argue against the point that there were two brothers, Yaakov and Eisav, one whom Hashem loved and one whom Hashem hated. That might be true. But, G-d doesn’t need to teach them a Chumash lesson. From the challenge of the people, it would seem that Hashem has to respond with some evidence that He did in fact love them. Why then doesn’t He do that, and instead digress and bring up Yaakov and Eisav?
To answer this question, we have to understand what it means that G-d loved Yaakov and hated Eisav. In doing so, let’s start with why G-d loved Yaakov and hated Eisav. Well, G-d didn’t just decide one day to pick favorites and hate on Eisav, which happens in some families. Even if someone as holy as Yitzchak might’ve possibly been fooled into expressing love based on mundane factors [Bereishis 25:28], G-d is the All-Seeing Parent Who is able to take all of the actions of His children into account. That means that if He is able to express hatred for Eisav, it has to be for a really good reason. His “hate” for Eisav could not be like the human burst of emotion that stems from vengeance, anger, or personal discomfort with external features about Eisav. It can only be the result of fundamental lifestyle choices made by Eisav and his descendants which fly directly in the face of the Will of G-d. The hate would have to go to the core of Eisav’s essence, the person that Eisav chose to become. G-d’s hate could only be directed towards someone who wittingly spurns the Divine and idolizes the material world, which is exactly what Eisav does in our Sidrah when he exchanges his spiritual birthright for lentil soup. “Vayivez Eisav Es HaBechorah”-“And Eisav spurned the birthright” [Bereishis 25:34].

And why was Yaakov received differently by Hashem? We might suggest that Yaakov was exceedingly righteous. Perhaps he demonstrated spiritual greatness. Maybe, but that’s not what the Torah says about him. All it says is that he was an “Ish Tam,” a simple and innocent man [Bereishis 25:27]. He was just a decent man! Perhaps that’s all it takes to earn expressions of G-d’s love!

Now, considering all of the above, imagine if Yaakov’s seed were to make the same choices as an “Eisav” might and fail to be G-d’s beacon of human decency to the world, how might they differ from the man whom G-d “hated”? They probably wouldn’t differ so much at all. That is what G-d is responding to the B’nei Yisrael’s challenge!

Hashem says, “I loved you,” and the people say “Prove it.” And as we mentioned earlier, G-d could’ve easily defended this stance by showing them how their very existence reflects His love for them, but instead, He went to the core of why they were really upset. They’re upset because right now, they don’t feel Hashem’s love to which Hashem responds, “And tell Me, why you don’t feel loved? There were two brothers, Yaakov and Eisav. I loved Yaakov and hated Eisav. Right now, which one are YOU?”

By invoking the names of Yaakov and Eisav, G-d was not just flashing back to ancient history. He was invoking spiritual representations of the choices we make every day and telling us just how that would be represented in a court of Divine Judgment. Hashem told them he loved them, and indeed, he did honestly love them in the past when they manifested Yaakov-like qualities, when they displayed decency. But, as the Navi goes on to tell us [Malachi 1:6], “HaKohanim Bozei Shemi VaAmartem BaMeh Bazinu Es Shimecha”-“the Priests spurned My Name, and you say, ‘With what have we spurned Your Name?’” Indeed, the Priests spurned spirituality like only an Eisav could (and if one continues reading the Haftarah through, one will notice that the concept of “spurning” spirituality is a theme in this text). And how did they spurn G-d’s Name, exactly? The Navi goes on to describe the nature of the offerings they brought before G-d, some from lame animals and blind animals, or even stolen animals. Why? Because it was financially easier that way. Now, is this supposed to be a real tribute to G-d? It looks more like spirituality receiving the short end of stick. In this vein, the Navi challenges them [1:8] “Hakriveihu Na L’Fechasecha! HaYitzricha…?”-“Offer it, if you please, to your governor! Will he show you favor…?!”

Mind you, these were the Kohanim who were supposed to be a source of inspiration to Israel. The spiritual responsibilities of the Kohanim were originally the designated rights of the firstborn, rights which Eisav himself rejected and spurned! And now, the new bearers of those rights have also spurned them! And if that’s the case, what was the whole point of the contrast between Yaakov and Eisav?

In the same vein, the B’nei Yisrael—Yaakov’s children themselves—are supposed to be a source of inspiration to all of the Eisavs in the world. Israel, as a nation, is supposed to tap into Yaakov’s wholesomeness and be a Mamleches Kohanim, a Kingdom of Priests. When they don’t do that and instead borrow from Eisav’s own craft, then again, what was the whole point of the contrast between Yaakov and Eisav? What can they expect from the G-d of True Judgment Who chose Yaakov on account of his innocence and decency?

In the end, the Haftarah’s message is quite telling in terms of how we’re supposed to relate to the marked difference between Yaakov and Eisav, what that difference should mean to us. Being a Ben Yisrael is not just a lucky, privileged status. It is a great responsibility. It takes living up this responsibility to truly unlock the privileges that come with, the expressions of Hashem’s love for us. What that tells us is that being a Yaakov, or a Ben Yisrael, in certain ways, is a choice, only in so far as no one can physically force us to live up to the standards of a Ben Yisrael. A gentile may choose to convert and take on the status and responsibilities of a Ben Yisrael, and even though a Jew cannot Halachically remove his status as a Ben Yisrael, it is still only by his free choice that will he ultimately fulfill his practical responsibilities. In that vein, we choose every day to live or not to live like a Yaakov as a Ben Yisrael. But, whatever choice we make, there are inescapable consequences, because those choices are reflective of the way we want to identify spiritually when we stand before G-d. And those choices will be reflected by either Hashem’s love or, Chas Va’Shalom, His hate.

Hashem has set the standard very simply. He loves Yaakov and hates Eisav. Which one will we choose to be?

May we all be Zocheh to live up to the standards of spiritual wholesomeness set by Yaakov Avinu, be true B’nei Yisrael and unlock Hashem’s eternal love for us in its fullest form, in the days of Moshiach, Bimheirah Biyomeinu! Have a Great Shabbos!
-Josh, Yehoshua Shmuel Eisenberg 🙂