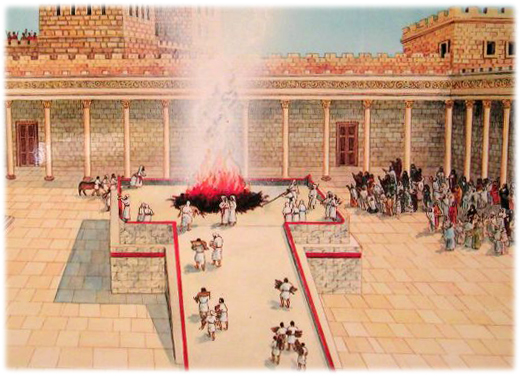 As we’ve seen throughout our studies of Haftarah, it is typical to find the major themes or focal points of the Parshah HaShevua somehow reflected or reframed in each Sidrah’s Haftarah. However, there are some Haftaros that not only re-teach the ideas of the Sidrah, but they even modify those ideas, revealing different perspectives of those ideas so as to give us a better understanding of them. Sometimes, those Haftaros will do that by actually challenging the fundamental theme of the Sidrah, causing us to question the theme ourselves. The Haftarah for Parshas Tzav is one of those.

Coming off of Parshas Vayikra, Parshas Tzav continues the discussion of Korbanos (offerings) by explaining the intricate procedures for each kind of Korban. The Sidrah begins with the laws surrounding the Korban Olah (Elevation/Burnt offering) and revolves around the role of the Kohanim in the process of “delivering” the offerings.

And we explained previously that, obviously, G-d does not physically desire or have an emotional need for our animal sacrifices, and that the whole point of Korbanos is, as the root of the word “Korban” implies, to become “close” with our Creator by genuinely giving up of ourselves to present something to Him. We suggested the common analogy of the child who scribbles his sloppiest but most heartfelt drawing for his mother. She doesn’t need it, but it means something; it is a link in her relationship with her child. And in the Haftarah for Vayikra [Yishaiyah 43:21-44:23], the Navi criticized the people for neglecting to offer Korbanos, thereby showing no interest in that relationship.

However, that is not the issue in this Haftarah. The Haftarah for Parshas Tzav brings us a couple of pieces from Yirmiyah [7:21-34, 8:1-3, 9:22-23] during a time when the people were certainly offering Korbanos. However, here, the whole point of the Korbanos—the recognition of one’s relationship with Hashem—was entirely lost in practice. Yes, they brought Korbanos, but not to Hashem’s favor. Thus, from the get-go [Yirmiyah 7:21], the Navi tells the people to pile their Olos onto their Zevachim, their Feast offerings, and to eat them. For anyone who knows what a Korban Olah is, this instruction implies the greatest disdain because the flesh of the Korban Olah is not supposed to be eaten, but it is meant to be entirely burnt on the Mizbei’ach for Hashem. Says Hashem, “You can go ahead and shove that Olah down your own throat, because I don’t want it.” Not only that, G-d insists that He really doesn’t care about Korbanos, as the Navi continues to suggest that it was not Korbanos that Hashem demanded of the B’nei Yisrael when He brought them forth from Egypt, but it was that they should “listen” to His “voice” and obey His Will [Ibid. 7:22-23].

The recurring line in this Haftarah is “V’Lo Sham’u V’Lo Hitu Es Oznam”-“But they did not obey, nor did they give ear”—“You didn’t listen!” [7:24, See also 7:26, 27, 28] demonstrating G-d’s apparent frustration and rejection of their offerings.

The Navi continues to demonstrate how the people missed the point of Avodah as they engaged in the worship of Tophes (perhaps another title for Molech), giving over their children’s lives, as if trying to copy and perhaps one-up Avraham Avinu who was prepared to offer up his own son. Of course, Korbanos are not merely some magical ritual to “appease” the “forces” of the world. Of course, they can be, if done properly and with the right mindset, an aid to the person who is living according to Ratzon Hashem! But, what these people were bringing, the Navi writes [7:31], “Lo Alsah Al Libi”-“It did not go up in My heart”—which, in its simple reading, means “I have not imagined,” as if to say that G-d did not have this sorry excuse for Korban in mind when He instituted Korbanos. Perhaps, though, we can read this verse metaphorically, as if to say, “Lo Alsah [עלתה] Al Libi”—“This misconstrued Korban is not an Olah [עולה] that reaches My heart!”

So, with that tirade, the Navi seems to undercut the essence of Tzav which, we’ve established, is the technical procedure of the Korbanos and role of the Kohanim in that process. After hearing the wrath of this Haftarah, how are we supposed to relate to the entirety of these Sidros which revolve around the Avodah B’Mikdash? Does Hashem really want it?

Perhaps, this argument may be the challenge of the Rasha, the Wicked Son of the Haggadah, who asks, “Mah HaAvodah HaZos Lachem”-“What is this service to you?” Because indeed, why does G-d care about us going through the motions? What does it intrinsically accomplish? And if G-d doesn’t care, why should we?

Indeed, this question is a good question if you are a Rasha who does not obey the Will of Hashem, certainly, it stands to reason that the Avodah is meaningless. But the end of the day, Hashem apparently has ascribed some value to the Avodah of Korbanos, for indeed, Hashem has mandated us to bring Korbanos. So, where is the true value in it? The obvious answer is that if done properly with the right attitude and mindset of course Korbanos are powerful. They are an integral function of our relationship with Hashem because they reflect that willingness to come close to Hashem. That’s why the Torah itself testifies that if done properly, the Korban will manifest a “Rei’ach Nicho’ach LaHashem”-“a pleasing aroma (fragrance) to Hashem” [Shemos 29:18], which Rashi there explains citing the Gemara in Zevachim [46B], means, that the “satisfaction” of the Korban is the plain fact that G-d issued a command and we obeyed His Will! However, we have to keep that goal in mind throughout. That’s what it comes down to. Because, otherwise, what is the point of offering Korbanos—going through the motions of coming close—if, in truth, your entire way of life is a life of distancing yourself from Hashem and His Will? Of course it’s essentially worthless and, in such a case, you should just as well eat your Olah yourself! All of that should be obvious. But, again, sometimes, even that which is obvious can be lost in practice. Thus, the Navi reminds us that while we engage in the requisite procedures for the Korbanos, we have to realize that the worth does not lay in the intrinsic Avodah and the going through the motions, but rather, in the devotion of the person offering it, the person who follows the Will of Hashem!

May we all be Zocheh to engage in our Avodos properly and with the right attitude, and Hashem should not only accept our Avodos favorably but allow us to perform the Avodah before Him once again in the Third Beis HaMikdash with the coming of the final Geulah in the days of Moshiach! Have a GREAT Shabbos HaGadol!
-Yehoshua Shmuel Eisenberg 🙂