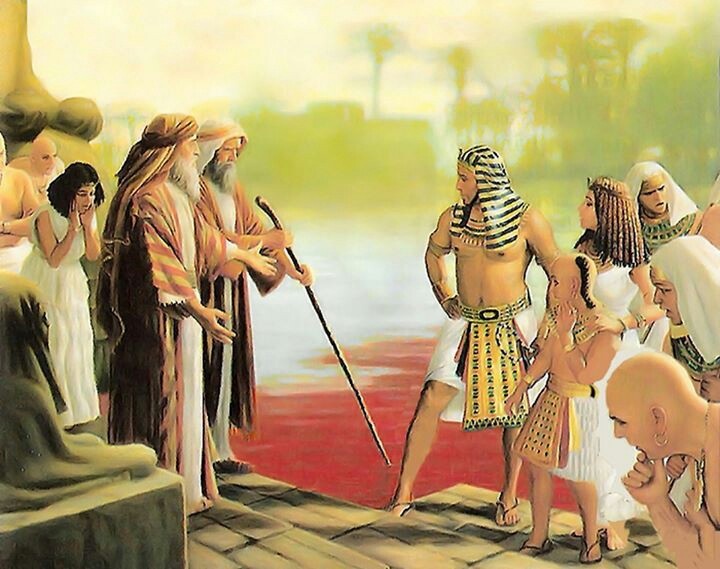 “The King of De-Nile”

As Parshas Va’Eira continues the larger story of Yetzias Mitzrayim, the Exodus from Egypt, it should not be too difficult to choose an appropriate Haftarah reading from the Nevi’im, which, as we’ve mentioned in the past, frequently revisits the topic of the Exodus. However, as we might recall from our discussion of the Haftarah for Parshas Shemos, the Ashkenazic Haftarah selection there did not even explicitly reference the Exodus story (and Egypt was only mentioned a couple of times in passing). Nonetheless, we were able to underscore some other important points in that Haftarah which highlighted even deeper and more fundamental themes in the Sidrah, all without even referencing the surface story about the nation suffering in Egypt.

Having said that, Va’Eira’s Haftarah fundamentally differs from that of Shemos in the sense that, in Va’Eira’s Haftarah, Egypt is not merely mentioned in passing, but in fact, it is front and center as a the subject and recipient of the prophecy.

The reading is taken from a series of prophecies against the various nations of the world in Yechezkeil. In this particular Haftarah, Yechezkeil targets the “contemporary” Egypt and proceeds to describe its eventual downfall [Yechezkeil 28:25-19:21]. Knowing nothing else, this reading sounds like a great choice for a Sidrah about Hashem repeatedly warning and smiting “Ancient” Egypt.
However, if that simple connection is the only basis for using this reading from Yechezkeil as a Haftarah, we might ask why this reading is a better choice than, say, Yishaiyah 19 which also a segment from a series of prophecies against the nations of the world that is addressed to Egypt? In fact, this piece of Navi is not featured in any weekly Haftarah; however its concept is the same as that of the reading from Yechezkeil. Moreover, Yishaiyah 19 contains some fascinating parallels to that of the Exodus story. For example, Yishaiyah talks about how Hashem will target the Nile, causing it to dry up and become foul [Yishaiyah 19:5-10], slightly reminiscent of the Plague of Blood. Yishaiyah even describes how at the end of its punishment, Egypt will realize that G-d is in the “midst of the land,” [19:23-25] an education process that Hashem had said would happen through the plagues in the story of the Exodus [Shemos 8:18].

Considering the above, it seems that we have a great argument for the option of Yishaiyah 19 as a Haftarah for Va’Eira. Of course, it’s not the Haftarah, so what makes Yechezkeil 28-29 a more appropriate selection?

So, before we get into the reading itself, we have to understand that just like what we just saw from Yishaiyah, Yechezkeil doesn’t merely prophesy about the fate of a more modern Egypt, but the Navi appears to specifically display shades of the Exodus story. But even so, there must be something more here. The Haftarah must highlight a fundamental theme of Va’Eira. So, what does Yechezkeil talk about here?

From the outset of this Haftarah, Yechezkeil recounts Hashem’s warning that He will execute judgment against Israel’s oppressors and that as a result, they will know “that I am Hashem their G-d” [Yechezkeil 28:26], obviously basic themes of Exodus [Shemos 7:17]. But then, unlike what we see in the prophecy from Yishaiyah, Yechezkeil actually turns his attention to Pharaoh specifically, whereupon he is told to prophesy against him and the entire Egypt respectively [29:2]. This factor is quite significant, especially considering that the story of the Exodus revolves heavily around the Pharaoh of the earlier generation. So, what does the Navi have to say to the Pharaoh of his generation?

So, when addressing Pharaoh, the Navi refers to him as “Melech Mitzrayim HaTanim HaGadol HaRoveitz B’soch Y’orav Ashar Amar Li Y’ori VaAni Asisini”-“King of Egypt, the great sea-giant of the who crouches amidst his river, who says ‘Mine is my river, and I have made it’” [29:3]. Not subtly at all, the Navi depicts, with great imagery and poetry, the man who Pharaoh was. Notice how this Pharaoh does not just say that the Nile River is his, but with very obvious redundancy, he declares “Li Y’ori”-“my river is mine.” Pharaoh, in the times of Yechezkeil, no differently in the times of the Exodus, lived in his own world where he is a god and no force can say or do anything to defy that.

It is in response to this attitude and ideology that the Yalkut Shim’oni [Shemos 7:181] explains that, in Parshas Va’Eira, G-d sent Moshe and Aharon to Pharaoh to turn the staff into a Tanin, a sea-serpent [Shemos 7:9-10]; it was to denounce and debunk Pharaoh’s mythological fantasies, as if to say, ‘See this staff, it is a piece of dry wood; it shall become a Tanin with life and soul and swallow up all the other staffs, and it is destined to revert to a dry piece of wood. The same is true of you; I created you from a putrid drop and gave you an empire and you boasted and said, ‘My river is my own and I have made it for myself.’ Behold I shall turn you back to utter nothingness. You swallowed up all the staffs of the tribes of the B’nei Yisrael, behold I shall cause you to expel all you have swallowed…”
Furthermore, as G-d started His onslaught of Egypt by turning the Nile to blood which killed all of the fish, the Navi here describes how G-d would hook the sea-giant by the cheeks and draw him and all of the Nile’s fish out of the water [Yechezkeil 29:4-5].

And as the Navi continues, it once again reiterates the resounding theme of the Ten Plagues that “they will know that I am Hashem” [29:6-9, See Shemos 7:17], but this time, the Navi emphasizes that Hashem targeted Pharaoh because of his claim that he created the Nile.

Based on not only the Midrash, but really the entire Exodus story, these two components, Pharaoh and the Nile are major players. Moshe is constantly told to meet Pharaoh at the Nile. The Nile was the “provider” of Egypt commonwealth and the “destroyer” of the Hebrew children, and Pharaoh is the self-professed King of the Nile. Thus, the Navi’s focus on the Nile and Pharaoh’s relationship with the Nile seem to be the critical components of the Haftarah. But, why are Pharaoh and the Nile so significant to the larger Exodus story?

The reason is that if we would just view the Exodus as a story about an oppressive nation versus a vulnerable people whom G-d was gracious enough to save, it would not suffice. One would be missing something from the story. Although a prophecy about the doom of Egypt like that which we might find in Yishaiyah would be great reading to supplement a story that features Israel versus Egypt, the story of Exodus is hardly one about Israel versus Egypt. More so than the Egyptian people, it was Pharaoh who was so stubborn in his irrational denial of G-d and self-aggrandizing attitude that he continued to put himself and his nation in danger even when the nation was ready to submit. Yes, the Egyptian people allowed their monarch to act as he did and could only follow his direction, but the backdrop of the Exodus story is about the decisions and thought processes of an agnostic Pharaoh, without whom there would have been no Makkos (plagues).

If it was just about a mean and oppressive Egyptian people, we could just forget about the Makkos and skip to the Splitting of the Sea of Reeds where Hashem ultimately judges the Egyptians. The plagues were, as we explained, served as a reality check, to put a rest to Pharaoh’s ego, and thereby clarify to him, his people, and most importantly to the B’nei Yisrael, that beyond any shadow of doubt, Hashem is the only true G-d, involved in the world, and that there is no one like Him in the entire world.

That’s what we’re told about in Yechezkeil. We have, once again, a stubborn Egyptian king who claims once again to be the creator of his river, his own little world. It’s not just a mean and oppressive king and people, but the ideology and attitude of the said society and its leader that makes them the perfect pawns for Hashem to make an exhibit out of for the B’nei Yisrael to see. This selfsame process was what Hashem begins to execute in Va’Eira.

The message of the Haftarah is quite clear. The Jews as well as the “Egypt” of every generation will be forced to recognize the truth that Hashem is the only true power in this world and in all worlds. The nations who ignore this reality and oppress Hashem’s children will be retaught this lesson. In the meantime, we, the B’nei Yisrael, would be wise to remember this lesson and meditate on it constantly, because it is relevant to us no differently. We don’t live in our own little world. We live in Hashem’s world where Hashem’s Will reigns supreme. Instead of stubbornly shrugging off this reality like the self-professed King of the Nile, we should realize that there is only Hashem, He is intimately involved in the world, and there is no one like Him in the entire world.

May we all be Zocheh to humbly recognized and subject ourselves to the true King of Kings, serve Him to the best of our abilities, and thereby merit His protection and redemption from exile once again with the coming of Moshiach, Bimheirah Biyomeinu! Have a Great Shabbos!
-Yehoshua Shmuel Eisenberg 🙂