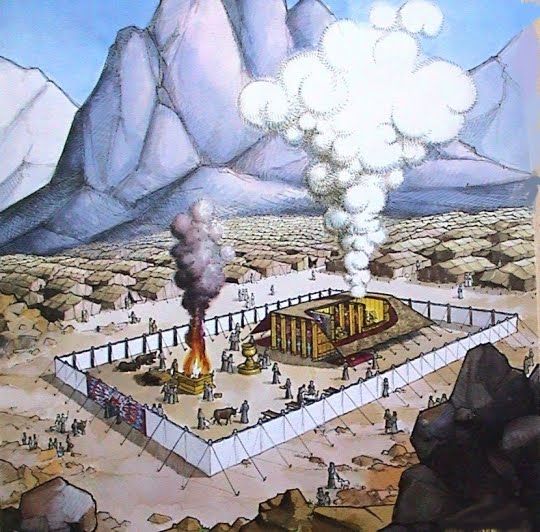 With Parshas Vayak’heil and Pekudei, we return to the Haftaros of our “Mishkan Series” which recounts Shlomo HaMelech’s building of the first Beis HaMikdash [Melachim Aleph 5-8]. Back in the Haftarah for Parshas Terumah when the Mishkan Series took off, we began to address the question concerning the redundancy of the Mishkan-related Sidros. Aside from describing the intricacies and details of the Mishkan materials, the Torah goes as far as repeating and analyzing those same intricacies and details between Vayak’heil and Pekudei. The challenge, as a result, is that it is difficult to truly identify the new themes that are being brought out in each subsequent Sidrah of the Mishkan Series. And if there really are no new themes in Parshas Vayak’heil and Pekudei, then why is the Torah just wasting its valuable space and our valuable time by relating the same, seemingly bland material again?

However, we suggested that looking at the corresponding Haftaros of the Mishkan Series can perhaps help us understand the differing themes. And, in fact, when discussing the Haftarah for Terumah, we suggested that the Haftaros sort of teach us to view the Sidros of the Mishkan Series as stages of a larger process. The theme of each of these Sidros would then correspond to these stages.

Stage I of the Mishkan Series, we explained, in light of the Haftarah for Parshas Terumah [Melachim Aleph 5:26-6:13], was the early, planning stage. The Torah described the blueprints for the Mishkan. Those blueprints, as reflected in both Parshas Terumah and its Haftarah, contained not just the architectural plans, but the overarching goal of the Mishkan and the Beis Mikdash: “Make a place for the Divine Presence in this world.”

If all of that is true, then the Haftarah for Parshas Vayak’heil must mark Stage II of the Mishkan Series. What is Stage II? Well, if Stage I was the planning stage, the stage of potential, then Stage II must begin to actualize that potential, to turn the planning into action, to bring the goal to life. And indeed, that’s what is reflected in both Vayak’heil and its Haftarah [Melachim Aleph 7:40-50]. Just as Vayak’heil begins the actual work of the Mishkan, in its Haftarah, the Navi describes, in detail, how Chiram made the appurtenances of the Beis HaMikdash and how Shlomo HaMelech constructed the vessels.

Another fascinating parallel between our Sidrah and its Haftarah lies in the actual format for the building processes. If one looks closely at the “blueprints” in Parshas Terumah and then the actual “work process” in Parshas Vayak’heil, one might notice a slight change in order. Parshas Terumah began its discussion with descriptions of some of the vessels before even describing the Mishkan itself, while in the actual building process described in Vayak’heil, the Mishkan was made first. Chazzal tell us that, in fact, there was a dispute between Moshe Rabbeinu and the leader on the construction site, Betzaleil Ben Uri Ben Chur, concerning which structure to build first; the Aron HaKodesh (Holy Ark) or the Mishkan itself [See Rashi to Shemos 38:22 citing Yerushalmi, Pe’ah 1:1 and Berachos 55A]. Moshe assumed that the Aron, the heart of the Mishkan, should be the first thing built while Betzaleil thought that the body of the Mishkan needed to be built first so as to serve as a container for Aron and the rest of the “furniture” of the Mishkan, because otherwise, where are all of the vessels going to stay in the meantime? Logistically, the Mishkan had to be made first. And Chazzal tell us that ultimately, Hashem confirmed that Betzaleil was correct.

Well, if we consider the order of Haftaros, we might note that the Beis HaMikdash’s building process, as well, is modeled after “Shitas Betzaleil” (the opinion of Betzaleil), for only after the external framework and area would be made and arranged would the internal vessels be made as well as the additional adornments. The container had to come before its contents.

While at the surface, this background dispute between Moshe and Betzaleil does not seem to be incredibly significant to our discussion; however, if we consider our stage theory of the Mishkan Series, it speaks volumes about the difference between Stage I, the blueprints, and Stage II, the work process. Moshe Rabbeinu suggested making the Aron HaKodesh first because again, the Aron is the essence of the project, the seat of the Divine Presence. It represents the goal of the project which one cannot forget throughout the process of bringing the project to fruition. And indeed, part of looking at the blueprints means being able to see the completed project at its conception. In Terumah and its Haftarah, G-d conveyed exactly what the final goal of the project would be. That is all the mindset of Stage I.

However, once we get to Stage II, when we want to actual make the dream a reality, one necessarily has to work in steps and within practical boundaries, considering logistics and everything that is needed to actually assure that the goal is met. Most of the time, it means that one has to first lay down the foundation, design and construct the skeletal structure, and work on from there. Of course, the end goal is always in mind, but, until then, one must work out the logistics.

And that is the important theme of Parshas Vayak’heil, namely, the difference between the goal in conception, and actual the toiling and production that goal, which is most often more difficult to carry out. If we keep the goal of the blueprints in mind while following the appropriate working process, our Sidrah and its Haftarah suggest that we will be successful. Stay tuned for Stage III.

We should all be Zocheh to keep our spiritual goals in mind while we toil, and be sure to take all of the appropriate steps in our “building processes” to reach our spiritual destination, and Hashem should help us reach that destination of Geulah with the Third Beis HaMikdash and the coming of Moshiach, Bimheirah Biyomeinu! Chazak! Chazak! V’Nis’chazeik! Have a Great Shabbos Parah/Chazak!

And finally, with Parshas Pekudei, we reach Stage III of the “Mishkan Series,” whose Haftarah brings us to the end of Shlomo HaMelech’s building of the first Beis HaMikdash [Melachim, Aleph 7:51, 8:1-21].

Parshas Pekudei, as per its name, marks the Pekidah, or the reckoning—weighing, measuring, and analysis of all of the Mishkan materials. What’s a little bit strange, though, is that normally, when dealing with any project, no less a building process, all of the measuring and weighing of materials takes place before the project. It kind of has to because one needs to know what materials are needed, how much of each material is needed, and so forth. We would assume that in fact, the Mishkan had to be built that way, so, if that’s the case, what is the nature of the reckoning recorded in Parshas Pekudei, at the end of project?
As we explained in the Haftarah for Parshas Vayak’heil, there is an important difference between Stage I and Stage II, namely, the difference between conception and fruition, between plans and action. We explained that most of the time, the goal cannot be met immediately upon the beginning of the working process, but for logistical reasons, one has to take a seemingly roundabout path in order to assure that the goal be met. It means looking at intricate details, dealing with the “nuts and the bolts,” or for our purposes, the hooks, loops, pegs, and sockets. Thus, the imagination of the goal met and the process to getting there will often look different from one another, at least at the beginning of the process.

However, once we get to Stage III, the “finale,” when the completed “work” resembles the full picture as seen in the “blueprints,” one has to take a step back to reflect on the project and understand exactly how the toil of Stage II was able to create the vision of Stage I. Thus, the reckoning in Parshas Pekudei is a retrospective one whose nature is one of reflection and even celebration a “job well-done.” In Pekudei, we reassess the effort that went into creating Hashem’s terrestrial abode. In Pekudei, Moshe blesses the B’nei Yisrael for that effort, that Hashem should ultimately establish the work of their hands. It is at the realization of Stage III when G-d ultimately descends to the top of the Mishkan in a cloud for His Divine Presence to ultimately reside there.

Thus, in our Haftarah, we see all the same themes in the Beis HaMikdash. Shlomo HaMelech celebrates the completion of its building. Moreover, exactly as was with the Mishkan, the conclusion of the Mikdash is marked and validated by the resting of G-d’s Cloud overhead [8:10-11].

That’s the goal of any project; that G-d should reside in the work of our hands. It means that we have to be able to place our hearts on G-d’s Will, envision His goal (Stage I) as we begin to carry it out (Stage II), and ultimately make sure that in the end, our work represents that vision. Then, we can reflect and celebrate validation from Hashem’s Divine Presence and merit His blessing the work of our hands.

May we all be Zocheh to see the fruits of our spiritual labor, have Hashem’s blessing in the work of our hands, ultimately experience validation and approval from Hashem, and His Presence should rest among us once again in the Third Beis HaMikdash, Bimheirah Biyomeinu! Have a Great Shabbos Parah!