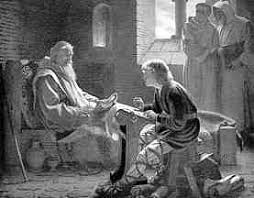 This D’var Torah is in Z’chus L’Ilui Nishmas my sister Kayla Rus Bas Bunim Tuvia A”H, my grandfather Dovid Tzvi Ben Yosef Yochanan A”H,  & my great aunt Rivkah Sorah Bas Zev Yehuda HaKohein in Z’chus L’Refuah Shileimah for:
-My father Bunim Tuvia Ben Channa Freidel
-My grandfather Moshe Ben Breindel, and my grandmothers Channah Freidel Bas Sarah, and Shulamis Bas Etta
-Mordechai Shlomo Ben Sarah Tili
-And all of the Cholei Yisrael
-It should also be a Z’chus for an Aliyah of the holy Neshamos of Dovid Avraham Ben Chiya Kehas—R’ Dovid Winiarz ZT”L, Miriam Liba Bas Aharon—Rebbetzin Weiss A”H, as well as the Neshamos of those whose lives were taken in terror attacks (Hashem Yikom Damam), and a Z’chus for success for Tzaha”l as well as the rest of Am Yisrael, in Eretz Yisrael and in the Galus.

“Each According to His Blessing”

With the Haftarah for Parshas Vayechi, we return to Melachim Aleph [2:1-12] where Dovid HaMelech is on his way out of the scene and Shlomo HaMelech is on the rise. The obvious connection between this Haftarah selection and the Sidrah is that in each of them, the spiritual leader of the time delivers his final words to his offspring before he passes on. Just as Yaakov Avinu delivers the “Birchas Yaakov” to his twelve sons who would become the Shivtei Yisrael, Dovid HaMelech delivers his final instructions and advice to his son Shlomo who would succeed him as the Melech Yisrael. It’s an easy selection for those reasons alone.

But, it’s not just the imagery of a royal, elderly father speaking to his offspring for the last time that connects the two readings.

If we give Dovid’s speech a closer look, we might be able to notice further parallels between Dovid’s speech and the Birchas Yaakov in the way Dovid addresses each of these individuals when speaking to Shlomo. The way Dovid describes Yoav Ben Tzeruyah’s murder of Avneir and Amasa as an act of “war during peacetime” [Melachim Aleph 2:5] resembles Yaakov’s rebuke of Shim’on and Levi who massacred an unsuspecting city (for better or for worse, a separate debate) [Bereishis 49:5-6]. Similarly, the way Dovid not only expresses his Hakaras HaTov (recognition of good, thanks) to the B’nei Barzilai HaGil’adi for accompanying him during his flight from Avshalom, but how he grants them the privilege of eating at the royal table [Melachim Aleph 2:7] may resemble Yaakov’s acknowledgment of Yehudah when he declares him eternal kingship [Bereishis 49:8-9]. We might also suggest that Dovid’s denunciation of Shim’i Ben Geira who viciously disgraced him [Melachim Aleph 2:8], in some ways, parallels Yaakov’s chastisement of Reuvein who disgraced his father’s “bed” [Bereishis 49:4].

Yes, there are some interesting connections in the basic themes of the texts. But, the question is if that is all there is. Is Dovid’s final address to Shlomo merely connected to Vayechi as it depicts another dying leader’s words to his offspring?
At first glance, that seems to be the crux of it. However, if we consider all of the content of Dovid’s speech, we might notice an even deeper theme that the Haftarah highlights from our Sidrah beyond the imagery of a dying father addressing his son.

The entire Haftarah is twelve verses long (which is cool considering there are twelve sons whom Yaakov addresses in Vayechi), but unlike Yaakov who addressed twelve sons, each one receiving only a couple of verses of content, Shlomo HaMelech is one individual son being addressed alone. It shouldn’t take nearly as long to give him the spiritual advice he needs to convey to him, yet, Dovid’s speech to Shlomo takes up nine of these twelve verses.

However, we might suggest that the reason why each of Yaakov’s sons is only addressed with a couple of verses at most is that Yaakov is speaking to them in the form of poetic and coded prophecy which is often kept concise, while Dovid is speaking to Shlomo directly with specific advice, including particular orders he must carry out. What that tells us though is that, in fact, as similar in general theme as the two readings are, the nature of the speeches in each reading is fundamentally different. Yaakov describes the spiritual fate of his sons while Dovid instructs his son, gives him general advice, and even makes some orders.

Another key difference is that, as we’ve referenced above, five out of the nine verses of Dovid’s speech to Shlomo are not even about Shlomo, as they are devoted to Dovid’s subjects and he wants Shlomo to repay each of them. These orders are not really the sum of Dovid’s general advice to Shlomo. They certainly have nothing to do with Shlomo personally. So, what do they contribute to this reading as a Haftarah?

Here is where we may find that other key theme of the Sidrah that is being highlighted in our Haftarah. Beyond the theme of dying father addressing his offspring, Vayechi’s theme is the idea of “Ish Asher K’Virchaso Beirach Osam”-“Each man according to his blessing he blessed them” [Bereishis 49:28]. And if we think about it, Dovid, like Yaakov with his sons, does not merely address Shlomo on a personal level, but, as we’ve described, he instructs him regarding the fate of multiple subjects in the kingdom; namely, Yoav, the B’nei Barzilai, and Shim’i Ben Geira. And at first glance, these individuals themselves have little to do with the larger message that Dovid has for Shlomo which is, as Dovid says it, “V’Shamarta Es Mishmeres Hashem Elokecha Laleches B’Darachav…L’maa’an Taskil Eis Kal Asher Ta’aseh…”-“And you shall guard the charge of Hashem your G-d, to walk in His way…in order that you understand all that you do…” [Melachim Aleph 2:3]. But, what Dovid accomplishes by enumerating the respective acts of his subjects is that he teaches Shlomo by is how to properly assess the individual actions of each one and treat each and every one accordingly, “Ish K’Virchaso,” each one according to his individual merits.

Thus, Dovid takes three isolated parties, each who played some role in his kingdom, and prescribes different treatment for each one. For Yoav who spilled blood in peacetime, Dovid tells Shlomo not to allow “his hoary head to go down to the grave in peace” [Ibid. 2:6]. Mind you, Yoav had been one of Dovid’s right-hand men who always acted with Dovid’s interests in mind. And yet, Dovid tells Shlomo to look at Yoav as an individual and to judge him accordingly. No differently, Dovid looks at the B’nei Barzilai and teaches Shlomo to acknowledge not only the guilt, but the appropriate praise and honor where it is necessary. And even further, when Dovid reaches the fate of Shim’i Ben Geira, he teaches that no two crimes are alike, for, while Yoav had acted incorrectly albeit for good reasons, Shim’i’s brazen rebellion against the throne could not be ignored and as such, he was left on a harsh probation so that any further misstep would mean that his “hoary head” would “go down to the grave in blood” [Ibid. 2:9].

Looked at in this light, the Haftarah is not merely a reflection of dying father advising son, but it is an education process for rising leaders to learn how to objectively assess and address each of his subordinates accordingly, realizing that no individuals are the same and that each one requires a different actions and measures, some in the forms of encouragement, others in the form of admonishment. And the trick is to address each one without looking at the other one, because what one says to one is not immediately relevant to the other. That’s what Dovid teaches Shlomo. He doesn’t just address him, but he teaches him how to address others, the lesson of Birchas Yaakov.

Thus, whether we’re playing the role as fathers to sons, kings to subjects, teachers to students, or leader to follower, the lesson is a crucial one. As Yaakov addressed his sons, and as Dovid taught Shlomo with his subjects, we have to properly assess the given people in our lives “Ish K’Virchaso.”

May we all be Zocheh to the wisdom and insight that we need to properly assess and address each of the people in our lives so that we can successfully fulfill our role in helping each other grow, and each one of us should be blessed, both in our individual lives and as a nation, to complete redemption with the coming of Moshiach, Bimheirah Biyomeinu! Chazak! Chazak! V’Nischazeik! Have a Great Shabbos!
-Josh, Yehoshua Shmuel Eisenberg 🙂