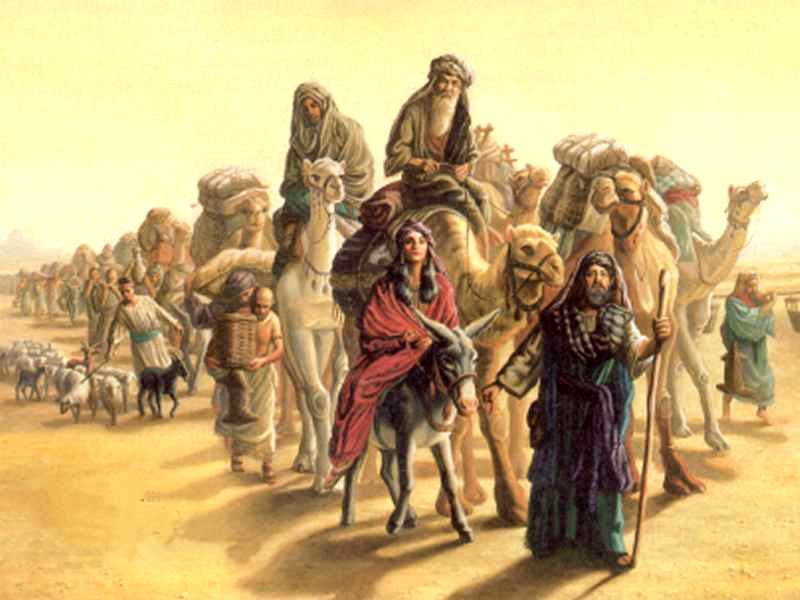 The Haftarah for Parshas Vayeitzei is taken from one of the lyrical prophecies of Hoshei’a which makes unmistakable references to the life of Yaakov Avinu, the protagonist of our Sidrah.

Just to get some background on Hoshei’a for a moment, as a prophet, Hoshei’a would typically address “Ephrayim”* which is one of the code names for the Northern Kingdom of Israel which consisted of the ten tribes which seceded from Yehudah, or the Davidic, Southern Kingdom, and adopted foreign gods in the process.

Now, it is in Hoshei’a’s rebuke of Northern Kingdom that for some reason, he evokes the memory of Yaakov’s past. So, the question is what exactly Hoshei’a is rebuking the B’nei Yisrael about that he makes reference to Yaakov Avinu?

So, let’s first take a look at the actual reference that our Haftarah makes to Yaakov. And, here is where Parshas Vayeitzei comes in [Hoshei’a 12:13]; “Vayivrach Yaakov S’deih Aram Vaya’avod Yisrael B’Ishah U’V’Ishah Shamar”-“And Yaakov fled to a field of Aram, and Yisrael served (for) a woman, and (for) a woman he waited (or guarded [sheep]).”

Obviously, the Navi is referring to Yaakov’s stay at Lavan’s home where he earned a livelihood and married his wives. As an interesting aside, this verse itself might hint to Yaakov’s two main wives, Rochel and Leah, as it mentions the word Ishah, woman, twice; the first time where it says that Yaakov worked for a wife might be a reference to Leah whom he married first after seven years of labor, while the second woman for whom Yisrael “waited” might be a reference to Rochel whom he truly anticipated being with and could only be with after waiting another seven days (this is not to ignore the fact that Yaakov’s work was primarily intended for Rochel; he ended up working to earn them both, but he waited for Rochel). Either way, there’s our shout-out to Parshas Vayeizei in our Haftarah.

The problem is that it really seems to be nothing more than just that, a shout-out. This verse appears to be the only one that actually relates to Vayeitzei. After this shout-out verse, the Navi proceeds to talk briefly about to the Exodus from Egypt, after which it describes the sins of Ephrayim. So, the question then is what the real relationship between Vayeitzei and the Haftarah is. Is there nothing more than this one-liner connection?

In order to answer this question, we have to first understand why it is that Hoshei’a gives Yaakov Avinu this shout-out in the first place. What does Yaakov’s life in Charan/Aram have to do with the rest of his discussion concerning the Northern Kingdom? What is the Navi trying to convey to Ephrayim by referencing Vayeitzei?

Now, in order to answer that question, we need to take a look at the other historical shout-out which the Navi makes, the Exodus. As was mentioned, after referencing Yaakov in Aram, the Navi mentions Egypt [12:14]; “U’V’Navi He’elah Hashem Es Yisrael MiMitzrayim U’V’Navi Nishmar”-“And with a prophet, Hashem brought Yisrael up from Egypt, and with a Navi, he (Yisrael) was guarded.”
If we’re paying attention, not just to the reference itself, but to the presentation of this reference, we will notice that its wording directly parallels the previous reference to Yaakov Avinu. Before, the Navi said that for a woman Yaakov worked and for a woman, Yisrael waited or guarded (Shamar). Now, it’s saying that with a prophet, G-d took Israel out of Egypt, and with a Navi, Israel itself was guarded (Nishmar).

Now, why is this important? Because it tells us that the Navi wanted us to compare the two stories, Yaakov in Aram and the B’nei Yisrael in Mitzrayim.

As it happens, many contemporary Tanach scholars (R’ David Fohrman among them) have noted that the themes and texts of those two stories in the Torah seem to parallel one another, as both involve a protagonist who is exiled from home, engaged in bondage at the hands of a crooked villain, the first protagonist being Yaakov and the second being the nation that descended from him. More strikingly, in both stories, the Torah tells us that when the enslaved protagonists flee from their respective houses of bondage, the tyrant hears of their flights and pursues them, using the same exact language for both stories; “Vayugad L’Lavan BaYom HaSh’lishi Ki Varach Yaakov”-“And it was told to Lavan on the third day that Yaakov had fled…” [Bereishis 31:21]; “Vayugad L’Melech Mitzrayim Ki Varach HaAm…”-“And it was told to the king of Egypt that the nation had fled…” [Shemos 14:5].

But even earlier, Chazzal drew the connection between the two bondage stories when they wrote Lavan into the Haggadah under the passage of Arami Oveid Avi (which came originally from Mikra Bikurim [Devarim 26:5-12]), comparing Lavan to the Pharaoh of Exodus. There, the passage itself juxtaposes our forefathers’ Aramean past to their progeny’s Egyptian bondage.

But apparently, even earlier than Chazzal, we see that the Navi intended to draw such a connection between our forefather and his progeny in their times of struggle.

Now that we’re perhaps convinced of the relationship between Yaakov in Aram and Am Yisrael in Mitzrayim, the question now is why Hoshei’a’s prophecy touches on these stories. What do they have to do with Hoshei’a’s rebuke to tribes of the Northern Kingdom?

As is typical in the Navi, especially in the Nevi’im Acharonim (Later Prophets), the nation is being rebuked because of they’ve redirected their devotion from G-d to idol worship. However, each of these prophecies has its own way of highlighting its intended themes. The themes being highlighted here are arrogance and ingratitude which were both displayed by Israel at that time.

The Navi mentions how Ephrayim angered Hashem by cleaving to the false deity known as Ba’al. But after a few verses of elaboration on their Ba’al observance, the Navi flashes back to the roots of this despicable betrayal of Hashem.

How might a lost people humble itself and return to G-d? The Navi suggests that they return to their roots and review their past; first, Yaakov as an individual, and then, Am Yisrael, as a people. They were lowly fugitives who had nothing to their names. Each could only survive and thrive with the help and assurance from G-d. It’s that simple. The success and assurance were only attainable when Yaakov and Am Yisrael were consciously aware of their source. Thus, Yaakov prays for Hashem’s care in the beginning of our Sidrah, and the B’nei Yisrael later cry out to Hashem in the throes of their subjugation. They each realized that G-d had situated them as fugitives so that they could understand that their only rights and claims to any of the perks of either this world or the next are only rooted in their eternal, spiritual connection to Him.

All of the above was forgotten within generations when the people ungratefully replaced the Supreme G-d of their predecessors with the meaningless idols of their oppressors. Forget the irrationality of this exchange. Forget the stupidity of this decision. The problem Hoshei’a is focusing on is the lack of gratitude. Gratitude is the whole basis for the passage of Mikra Bikurim which we referenced earlier, Arami Oveid Avi, where we recall our humble roots and the wonders that Hashem had done for us at our time of need. That Hashem had been there for them, rescuing them from all of the troubles of their past should have taught even the modern Ephrayim a lesson in gratitude.

In the end, Hoshei’a teaches us what we all know and that is that we owe a debt of gratitude to Hashem. Yaakov in Aram and the B’nei Yisrael in Mitzrayim are just paradigmatic of a constant pattern of kindness that Hashem showers us with, both as individuals and as a people. It’s never too late to express our appreciation. We reference the Exodus several times a day for that very reason. This week, we remember Hashem’s hidden hand in Yaakov’s success in Lavan’s home. Tomorrow and every day afterward, we will pay closer attention and take note of the kindness Hashem is still doing for us at each moment.

May we all be Zocheh to see and appreciate Hashem’s constant acts of kindness toward us, show our gratitude through our unwavering devotion to Him, and He should kindly redeem us from all bondage once again in the days of Moshiach, Bimheirah Biyomeinu! I hope you had a “Happy Thanksgiving.” Have a Great Shabbos!
-Josh, Yehoshua Shmuel Eisenberg 🙂

*Special Treat: A Glance at the Sephardic Haftarah*

Although there is plenty of overlap between the Vayeitzei-Haftarah of the Ashkenazic tradition and the two versions in the Sephardic tradition, the Sephardic Haftarah for Vayeitzei contains a larger series of fascinating verses containing striking textual references to the life of Yaakov Avinu. So, just to give a shout-out a few of those references…

In 12:8, when describing the dishonesty in business displayed by the Northern Kingdom, Hoshei’a uses another key word from Yaakov’s past; “Kana’an B’Yado Mo’znei Mirmah”-“You are a trader with cunning scales”
[מרמה מאזני בידו כנען]. Yitzchak told Eisav that Yaakov had taken his blessings with cunning [Bereishis 27:35].

In 12:9, Ephrayim claims not to have any iniquity in his riches, but that he has acquired his riches honestly with his own vigor, “On Li” [לי און], another reference to Ono, one of Yaakov’s key expressions.

In 12:10, Hashem says He will settle Israel in tents, (“Va’Ahalim [באהלים] KiMei Mo’eid”); Tents are another reference to Yaakov who was known for dwelling in them [Bereishis 25:27].

Finally for now, in 12:12, the Navi makes a reference to two places, Gil’ad [גלעד] and Gilgal [גלגל] who suffered for their idolatrous practices, and says that their altars were like Galim [גלים], heaps, on the field. These three phonetically similar words, Gil’ad, Gilgal, and Galim [גלעד, גלגל & גלים] might all be further references to Yaakov’s experience in Charan where Yaakov rolls a rock off a well, Vayigal [ויגל], where Yaakov and Lavan make a heap or Gal [גל] of stones for their treaty, and even the name of that heap, Gal’eid [גלעד].
Enjoy that! Good Shabbos again.