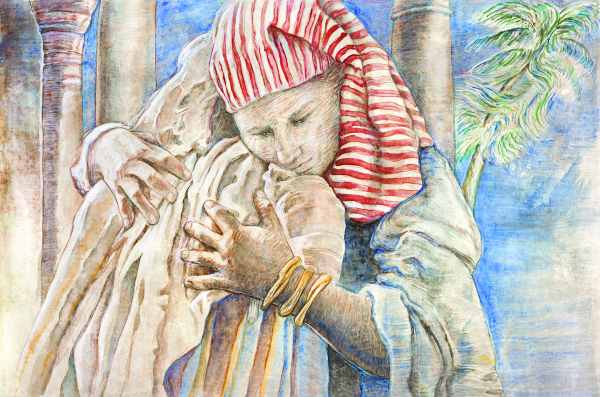 As the narrative of the Parshas Vayigash revolves around the reuniting of the divided family of Yisrael through the epic showdown between Yehudah and Yosef, there can be no easier Haftarah selection than this piece from Yechezkeil [37:15-28]. Indeed, in the Haftarah, Yechezkeil is commanded to write the names of the two stars of our Sidrah, Yehudah and Yosef on two separate pieces of wood. He is then told to place the two pieces of wood together for all to see. The Navi anticipates the Haggadah-like curiosity of the onlookers of Israel who would ask “Mah Eileh Lach?”-“What are these to you?” [37:18]. Yechezkeil, in same Haggadah-like format, is charged to ultimately explain the significance of these wooden tablets.

Again, the Yosef-Yehudah references makes this reading an obvious choice, especially considering that Yechezkeil is charged to do to these symbolic pieces of wood exactly as Yehudah and Yosef did with themselves in Vayigash, namely come together and be united. This factor alone is fascinating, that the Navi goes out of its way to recreate this union between Yehudah and Yosef, generations later. More than fascinating, this point is crucial for us, because while we could have simply read the story in the Parshah, enjoyed the drama and action, and then just moved on, this symbolic “re-reunion” featured in our Haftarah reflects deeper significance and meaning behind the narrative of Yosef and Yehudah that is apparently still relevant to us. Our Haftarah tells us that, in fact, our Sidrah is not just a story about a man in a viceroy costume, a worried family, and a heroic brother. There is something more essential to us as a people. So, what is the takeaway lesson from this apparently important reunion?

The truth is that there is no simple answer to that question, but the starting point is the understanding that there is a virtually eternal dichotomy that reaches a sudden standstill in Vayigash. So much ink has been spilled to explain the differences between the attributes, philosophies, and metaphysical makeup of the forces that are personified in Yehudah and Yosef.

So, we have these two very different, but equally necessary sides of the same coin. Yosef and Yehudah in particular are each the best of these two divided worlds, but the issue is and has always been that they are, in fact, divided. They have been divided, perhaps, since before their conception, when Lavan forced Leah and Rochel to become rival wives to Yaakov. We know from tradition that Rochel and Leah, two exceedingly righteous women, had an intimate sisterly love for one another, and both, at their own moments, were willing to make sacrifices for one another. However, the tension that their statuses as cowives had caused them was painfully palpable. And that tension was inherited by their children in even more extreme circumstances which tragically came to fruition in the harshest and most tragic form with Mechiras Yosef, the Sale of Yosef, perpetuated by Yehudah.

And yet, among all the murky actions portrayed by the various players of the Yaakov-family saga, the Torah never points an explicit finger at who is ultimately right and wrong, even when some of the sins are more discernably wrong than others. Yosef reported about his brothers, he spoke about his arrogant sounding dreams to them and the brothers possibly overreacted by attempting to kill him and ultimately selling him away. Yosef made mistakes. Yehudah made mistakes. Yaakov Avinu made mistakes. Whatever mentality each player had throughout all of these stories—justified or not, everyone seems to makes mistakes and can take some of the blame. And of course, mistakes can be often rectified. People can learn from their mistakes, they can mature, and they can do Teshuvah. Yosef grows up, mellows from his grandeur, and learns to relate properly with his brothers. Yehudah learns about responsibility and self-sacrifice. There are certainly many lessons that can be learned from each of the individual mistakes our heroes have made and the individual processes that they have gone through to rectify those mistakes.

But the respective faults and credits of our heroes are apparently not the greatest moral of larger story here, at least not from the perspective of our Haftarah. Our Haftarah tells us that the larger story here is about the goal of reuniting as a family and as a people.

Above, we highlighted the question which the Navi anticipates that Israel will ask Yechzkeil, and we pointed out the resonance that question has to the Haggadah. More specifically, that question comes from the voice of the Rasha, “the wicked son,” who is challenging the “father” on the basis of his observance of the Pesach service, “Mah HaAvodah HaZos Lachem”-“What is this service to you” [Shemos 12:26]. In other words, “Why is it worth it for you to burden yourself? What’s the benefit?” The Torah’s answer as well as the Haggadah’s answer is that our Exodus, our redemption from the Egyptian Exile depended on that sacrifice that we were making for Hashem with that service. We had no merits when we were sitting in our houses while Hashem was smiting Egypt the miraculous plagues. And had this “Rasha” been there, challenging “benefits” of the service, he would not have been redeemed.

Fast-forward to Yechezkeil and keep your finger on the page of Parshas Vayigash when we consider the similar question “Mah Eileh Lach?”-“What are these to you?” “What is the purpose of these two pieces of wood? Why, Yechezkeil, are you putting them together?” What are the people really asking him? Perhaps they are acknowledging the obvious challenges of bringing two worlds together, the burden of bending over backwards, putting differences aside, perhaps humbling oneself and even sacrificing oneself. Is it really worth it? Explains Yechezkeil, “Yes, because your redemption actually depends on it!”

“…Koh Amar Hashem Elokim Ani Lokeiach Es B’nei Yisrael MiBein HaGoyim Asher Halchu Sham V’Kibatzti Osam MiSaviv V’Heiveisi Osam El Admasam! V’Asisi Osam L’Goy Echad BaAretz…V’Lo Yehyu Od L’Shnei Goyim V’Lo Yeichatzu Od L’Shtei Mamlachos Od!”-“…So says Hashem G-d: I shall take the B’nei Yisrael from among the nations among whom they walk, and I will gather them from around, and I shall bring them to their soil! And I will make them into a single nation in the land…and they will no longer be as two nations, and they will no longer be divided into two kingdoms again!” [37:21-22]

The reunion between Yosef and Yehudah serves as a clear allusion to the eventual Ingathering of the Exiles at which time the divided people of Israel will, with G-d’s help, become a united nation once again. At the end of the day, it can be done! Yehudah and Yosef made it happen once before. When Yosef came to his senses and faithfully provided for his half-brothers of Leah, when Yehudah gave himself up for Binyamin, a half-brother of Rochel—when the diametrically opposed forces and Yehudah and Yosef embraced and brought the feud to that standstill, they were able to create a redemption in their time, representative of a larger redemption to come, if only, we today will be willing to recreate the union envisioned and modeled by Yechezkeil.

In the end, between Parshas Vayigash and the wooden pawns of Yechezkeil, we can understand that it happened before and it must happen again. No differently than any other Avodah which we must engage in when serving Hashem, this task, perhaps the holiest and most important in our entire Avodas Hashem, is certainly challenging. And no differently than any other challenge that life places before us, this one will require Hashem’s assistance. But, one way or another, it has to happen, and we have to make the strides to make it happen. Two opposite realities will necessarily be reunited in the coming of our redemption.

May we all be Zocheh to do our part to not only overcome our own personal challenges, but to overcome the challenges of division in Klal Yisrael, reunite as a people, and Hashem should empower us to overcome all of our challenges, reunite us once again eternally, ingathering us from our exile and sending us our final redemption with the coming of Moshiach Ben Yosef and Moshiach Ben Dovid, Bimheirah Biyomeinu! Have a Great Shabbos!
-Josh, Yehoshua Shmuel Eisenberg 🙂