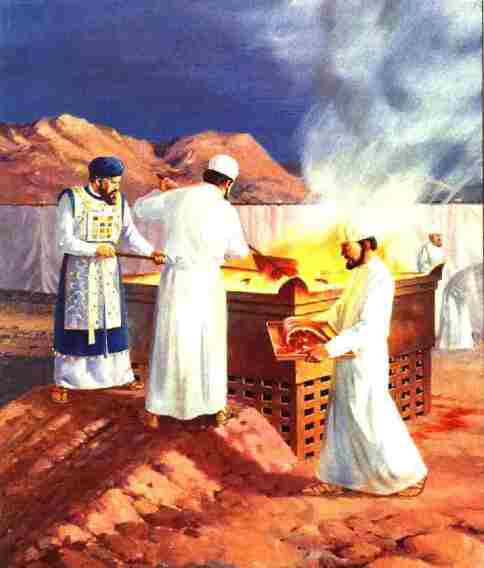 “Is it the Thought that Counts?”

With Sefer Vayikra, we open the manual for Avodah B’Mikdash, Temple service, the natural follow-up to the Mishkan series. And when it comes to the concept of Avodah, one of the common questions raised is how it is that we can actually “appease” or “please” the Intimate, Almighty G-d with animal sacrifices? Why does He need our Korbanos (offerings)? We don’t think that G-d actually has anything to benefit through them, do we?

And the truth is, He really shouldn’t need the offerings, yet in our Haftarah [Yishaiyah 43:21-44:23], Yishaiyah specifically tells us about Hashem’s utter disapproval when we neglected to offer Him our Olos and Zevachim—animal sacrifices [See 43:23]. It’s odd enough that we actually burden ourselves to offer something to Hashem which He certainly doesn’t need. It is even stranger that He gets upset when we fail to do so.

As far as why we offer G-d animals if He doesn’t need them in the first place, it’s a common question with a common answer. Granted, G-d does not physically desire or have an emotional need for our animal sacrifices, and the whole point of Korbanos is, as the root of the word “Korban” implies, to become “close” with our Creator by genuinely giving up of ourselves to present something that at least we value for Him to keep, almost no differently than the way a child scribbles his sloppiest but most heartfelt drawing for his mother. She doesn’t need it, but it means something; it is a link in her relationship with her child. It makes a lot of sense.

As helpful as the analogy is, it does not seem to completely answer the challenge posed to us by our Haftarah. Consider this: Yes, the mother cherishes the “fine art” of her child and will hopefully accept it warmly and enthusiastically each time he offers it to her. But, will she get angered, upset, or even slightly offended on the day that her child does not come home with a drawing for her? Most probably, not. She doesn’t need more artwork for the fridge, and she will love her child no matter what. Moreover, the child probably still loves his mother even if he doesn’t show it with a new drawing. It’s not the end of the world if he doesn’t bring a drawing. So, why does Hashem get upset when we neglect to give Him offerings?

The answer to this question must be that, obviously, the role of Korbanos in our relationship with G-d is somehow more fundamental and crucial to our relationship with G-d. The question, then, is how? Why is the child’s drawing for his mother not as essential to his relationship with her? Would we not say that like a mother for a child, G-d will love us as His children even if we should fail to offer Him the Korban which He does not need? Would we say that just because we neglected an offering, or we missed a Tefillah (prayer) that that means that we just don’t love G-d?

Apparently, G-d rightfully has higher expectations for us than a mother for her young child. Children might present their “offerings” to their mothers for a bunch of different reasons, but at the end of the day, the mother has few expectations for a young child. That is because he’s young, naturally selfish, dependent, etc. She won’t be upset about a drawing. However, when this child eventually grows up and gains a sense of responsibility, his mother will begin to hold him accountable for laziness, selfishness, gross negligence for things that are important. It will be no longer be okay if he does not do his chores or if he does not show appreciation, or if he does not somehow communicate his understanding of what is important in his relationship with his parents, if he merely ignores him.

Now, compared to G-d, we humans are certainly “childish”—we too are young, naturally selfish, and quite dependent as much as we like to think that we are not. However, Hashem has simultaneously given in us an “adult” sense of responsibility. As much as we remain children in G-d’s eyes, He also views us as grown-ups whose actions and lack thereof make a difference. Therefore, we must put forth some kind of action—even something as seemingly insignificant as an animal sacrifice—to show that he is mindful of his relationship with G-d. Even the slightest token of appreciation would make a difference.

Related to this discussion, there is a famous expression used all the time, “It’s the thought that counts” which is obviously has a lot of true meaning to it, but, in many ways, is not true. On the one hand, it can certainly be applied in our discussion, as the incorporeal G-d does not exactly desire the physical Korban itself, but “it’s the thought that counts”—the fact that you want to bring that offering as your “token” to G-d means something. But, at the same time, it’s not really true. Because, is it really the thought of bringing the Korban that G-d really appreciates? We can argue that if that is true, then one should never have to practically do anything—no actions necessary—no Korbanos, and no Mitzvos! Just think about your relationship with Hashem, think about loving Him, and meditate on thoughts of theoretically serving Him and giving Him theoretical Korbanos. If it was purely the thought alone that counts, we can probably uproot most of the Torah, and in fact, there are groups of Jews who have infamously done that.

Obviously, the mere thought is not enough, and in most relationships, that is the truth. There is something to be said about action—doing, moving, performing—something! And it’s true that sometimes, one can try to perform the requisite action and ultimately fail, but even the attempt to act is worth more than a dormant thought. Action, or even the attempt and will to act, tells us what thoughts are, where the heart truly is. It is physical actions that express and actualize the thoughts of our hearts which is why the Tefillin of our “hand” is actually worn on the arm, so as to corresponds to our hearts and emotions. When we lull ourselves into thinking wrongly that G-d does not require “real actions” of us, that He doesn’t actually care for our “Korbanos,” then, we begin to relinquish the entirety of the Torah which calls us to action.

This is the point of the Haftarah: Lofty thoughts alone do not make for an intimate relationship. If the loved one calls for the other, there must be an active response. That is the purpose of our existence; to be G-d’s praise in the world by responding to His call. The Navi tells us that when Hashem called, “Vayikra,” we did not care to call back. The relationship with Him did not matter to us, and so, what can one expect for such a relationship? The success of a relationship can only ride on both parties, exerting themselves as much as each can. If we do not sacrifice that Korban, we’re withholding the toil desperately needed for the relationship.

May we all be Zocheh to not only cherish our relationship with Hashem, but to show it through action, answer His call, offering Him the toil of our hands, and He should accept our services favorably, and allow us to participate in Avodah B’Mikdash once again in the days of Moshiach, Bimheirah Biyomeinu! Have a Great Shabbos HaChodesh!
– Yehoshua Shmuel Eisenberg 🙂