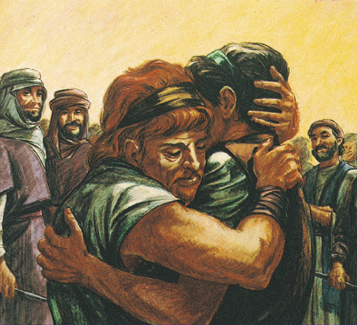 -My father Bunim Tuvia Ben Channa Freidel
-My grandfather Moshe Ben Breindel, and my grandmothers Channah Freidel Bas Sarah, and Shulamis Bas Etta
-Miriam Liba Bas Devora
-Mordechai Shlomo Ben Sarah Tili
-And all of the Cholei Yisrael
-It should also be a Z’chus for an Aliyah of the holy Neshamah of Dovid Avraham Ben Chiya Kehas—R’ Dovid Winiarz ZT”L as well as the Neshamos of those whose lives were taken in terror attacks (Hashem Yikom Damam), and a Z’chus for success for Tzaha”l as well as the rest of Am Yisrael, in Eretz Yisrael and in the Galus.

The Haftarah for Parshas Vayishlach is one of only two Haftaros that feature an entire book of Navi, here, the single chapter of Ovadiah, who prophesies against Edom, the code name for Eisav and his progeny.

Obviously, this prophecy is relevant to the discussion of Vayishlach which primarily features the famous reunion between Yaakov and Eisav. In Vayishlach, Yaakov has a battle with the guardian angel of Eisav. In Vayishlach, we also have a record of the lineage of Eisav/Edom at the end of the Sidrah. Moreover, it is a particularly attractive choice of Haftarah as the Midrash on our Sidrah portrays the End of Days when Yaakov and Eisav will reunite yet again at which point Eisav will be judged at Har Tzion based on the famous verse from Ovadiah [Ovadiah 1:21], “V’Alu Moshi’im B’Har Tzion Lishpot Es Har Eisav…”-“And the saviors will ascend on the Mount Tzion to judge Mount Eisav…” [See Rashi to Bereishis 33:14 citing Bereishis Rabbah 78:14].

Not only is the theme relevant, but the Haftarah text itself suggests overtones of Eisav’s life as we remember it, as Ovadiah employs perfect wordplay to denounce Eisav. For example, the Navi declares [1:2], “Hinei Katon Nisaticha BaGoyim Bazui [בָּזוּי] Atah Me’od”-“Behold, I have made you small among nations; you are very spurned,” a subtle recapping of Eisav’s first major mistake, when he, a firstborn, essentially made himself “smaller” by selling away and spurning his birthright status (“Vayivez Eisav Es HaBechorah”-“And Eisav spurned the birthright”) [Bereishis 25:34]. Now, G-d says, through Ovadiah, that the nation of Edom would become small and spurned.

Indeed, not only is the theme and text of Ovadiah’s prophecy relevant to the Eisav discussion, but Ovadiah, the prophet himself, was the most poignant messenger for Edom’s doomsday message considering that he himself was apparently a Edomite convert [See Rashi to Ovadiah 1:1 citing Sanhedrin 39B]; Chazzal tell us that Hashem reasoned that Ovadiah, who dwelt between two wicked people, King Achav and Queen Izevel, and was not influenced by them, should ultimately condemn Eisav, who dwelt between two righteous people, Yitzchak Avinu and Rivkah Imeinu, and did not learn from them. (*We might add that Ovadiah’s spiritual success is matched by that of Rivkah’s spiritual success, as she too grew up among two wicked people, Lavan and Besueil, yet she remained righteous nonetheless.)

So, yes, the Eisav/Edom factor in our Haftarah certainly makes Vayishlach and Ovadiah compatible readings; however, what is it that makes Ovadiah a better reading for Parshas Vayishlach than for Parshas Toldos, which also revolves around the Yaakov-Eisav rivalry? We may be quickly convinced of the perfect connection between Vayishlach and Ovadiah due to the pervading Eisav theme in both, however Vayishlach is not necessarily more devoted to the Yaakov-Eisav rivalry than Toldos was. Perhaps, Ovadiah could have just as easily been the reading choice for Toldos.

What was the Haftarah selection for Toldos anyway? As we’ve discussed previously, it was taken from the prophecy of Malachi which emphasizes the difference between Yaakov and Eisav, how Hashem loves Yaakov and rejects Eisav. Indeed, nothing wrong with that reading selection either. It’s certainly compatible with Toldos, but once we’ve raised our particular question about Ovadiah as a Haftarah choice for Vayishlach instead of Toldos, let’s ask the same question about Malachi as a choice reading for Toldos instead of Vayishlach: Why is Malachi a better option for Parshas Toldos than for Parshas Vayishlach?

Again, both Malachi and Ovadiah reference the opposition between Yaakov and Eisav which is a pervading theme in both Parshas Toldos and Parshas Vayishlach. But the point of this question is to understand that there is more than just “Yaakov vs. Eisav” in either of these two Sidros. This rivalry is an important factor in those Sidros, but each Sidrah apparently has its own focus and teaches a different lesson through the rivalry. Thus, understanding the finer difference between the focus of Malachi and the focus of Ovadiah might help us understand the finer difference between the focus of Parshas Toldos versus that of Parshas Vayishlach.

In terms of Malachi’s prophecy, we described at great length how the difference between being a son of Yaakov versus an Eisav is a decision that we make in every generation, every single day. Hashem’s love, at least the way in which He expressed it for Yaakov, was dependent on that difference he had from Eisav. Yaakov was to be a beacon of instruction and inspiration to the world around him, to the world inhabited by the likes of Eisav. And when Yaakov’s children were not living up to their lofty standard and were failing to be that beacon, they were no better than the Eisav, the brother whom G-d had rejected. We had pointed out that if Eisav was a materialistic man who spurned that which is holy, the Kohanim in Malachi’s time were no better, as the verse there says [Malachi 1:6], “HaKohanim Bozei Shemi VaAmartem BaMeh Bazinu Es Shimecha”-“the Priests spurned My Name, and you say, ‘With what have we spurned Your Name?’”

In Toldos, we were introduced to Yaakov and Eisav for the first time, and we were only learning which of the two displayed conduct that exemplified the way of G-d, which of the two should carry the torch of the Abrahamic mission of spreading G-d’s Name to the world. That was the major task of their father Yitzchak Avinu, to discern the difference between his sons and decide who must be chosen. And indeed, that was what the Haftarah of Toldos was about as well. Malachi tells us what it takes and what it means to ultimately be chosen, “loved” especially, by G-d. Malachi tells us how the B’nei Yisrael merited a unique display of G-d’s love, and how they could ultimately lose that “entitlement,” Chas VaShalom.

So now, what is Ovadiah about? It’s about the subsequent message to Eisav/Edom, what Eisav had accrued for himself, both as a person and as a nation. Eisav is denounced for his arrogance and his joy at the plight and exile of his brother, Yaakov. Mind you, this prophecy took place way before Edom destroyed the second Beis HaMikdash, which means that as of this prophecy, we haven’t yet even seen the worst of Edom. The nation would only grow worse moving forward. And so, the Navi says that Edom was a doomed nation. In the End of Days, Edom would be judged.

The question then is what this message does for us, the B’nei Yisrael, who hold this prophecy in our canon of Tanach? Moreover, what does the doom of Eisav/Edom have to do with Vayishlach per se?

As for the first question, we might suggest that the prophecy of Ovadiah, although directed at Eisav/Edom, has serious implications for us, the B’nei Yisrael. If we understand what it means to be a part of a nation which displays wickedness in either action or ideology—if we understand what it means to be tied to a doomed nation, we will know how to keep proper distance and protect ourselves spiritually even when that said nation poses no immediate threat. We have to understand that there is a marked difference between not just Yaakov and Eisav as individuals, but as nations—the difference between the spiritual standards they manifest, the difference between the fate of one versus the other.

That may explain why, in Parshas Vayishlach, after an astoundingly peaceable reunion between Yaakov and Eisav, Yaakov ultimately decides to part ways with Eisav. Whether Eisav’s kissing of Yaakov was wholehearted or not is a dispute in Chazzal [See Rashi 33:4 citing Sifrei, B’Ha’alosecha 69 to B’Midbar 9:10], but that might not have been what Yaakov was concerned about. Eisav may well have genuinely wanted peace with Yaakov, and perhaps Eisav would have truly been willing to walk side by side with Yaakov. For some reason though, Yaakov refuses the offer. There are those who criticize Yaakov for not bringing Eisav closer, while there are others who will not blame Yaakov for his cautious decision. But, perhaps Yaakov realized that although Eisav, as an individual, might have had the potential of becoming a decent man, Eisav/Edom as an ideology and as a people was doomed.

Why else would Ovadiah have parted ways from Edom? Certainly, by his time, Edom was a spiritually negative force to be reckoned with. Ovadiah realized that there was something wrong with Edom as an ideology and as a people. So, as an individual, Ovadiah saw the light and perhaps gently parted ways with Edom. He would not stick around to be part of a doomed nation.

Yaakov, like Ovadiah, thrives as a spiritual pillar for his nation-to-be because he stayed apart from Eisav. To have a peaceable interaction is one thing—and a good thing too. It’s encouraged to have many, many peaceable interactions with people of all nations. To form a spiritual alliance and intimately share values with, though, is a separate issue entirely. Nothing good can come from that kind of union with Eisav. His spiritual identity, as he has crafted it, is diametrically different, and thus, his spiritual destiny will be different. This difference between Yaakov and Eisav was not only true for them, and for Ovadiah, but in every generation, thus Ovadiah’s prophecy sits among all the other important prophecies in our Tanach.

And again, these were measures that were taken at a time where man had only been exposed to the relatively benign manifestation of Edom, before the Second Temple Era. Edom will ultimately coerce Yisrael, oppress them, and attempt to massacre them. The ability to do such things stems from this marked difference between the spiritual identities.

So, what is a cautious, good-hearted and well-intending Ben Yisrael supposed to do? The only answer is for Yisrael to be straight in its ways, always remain cordial with all people, and yet, maintain the necessary distance that comes from the understanding of the spiritual and ideological differences between Am Yisrael and Edom. Hashem, as determined in this Haftarah, will deliver retribution where it is due. All of that is His business. Edom will be dealt with. Am Yisrael’s goal should be to respectfully do whatever possible to not be a part of that.

May we all be Zocheh to be straight in our ways, stay true to Hashem’s Will in the way we interact with Him and all people of all nations, be a beacon to the world, and Hashem should keep us secured as He purges the world of all evil very soon with the coming of Moshiach, Bimheirah Biyomeinu! Have a Great Shabbos!
-Josh, Yehoshua Shmuel Eisenberg 🙂