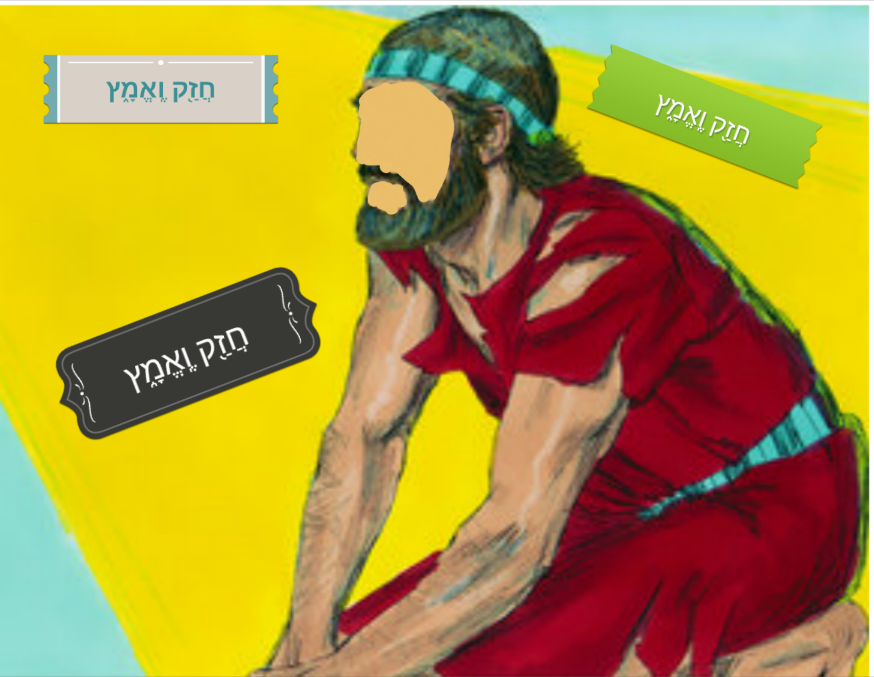 With Simchas Torah and Parshas V’Zos HaBrachah, the Torah comes to a close. So, what excerpt from Navi could possibly form an appropriate Haftarah to encapsulate the Torah’s close other than the very next words in Scripture, the beginning of Navi itself, Yehoshua [1:1-18]?

Surely, the “end of the Torah” is not merely about “endings,” and as such, the Haftarah was not taken from the end of Navi. It was taken from the beginning of Navi because the Torah doesn’t ever actual end, but as all of life moves forward, the Torah proceeds with it. As a Toras Chaim, literally, a living Torah, it and its principles necessarily live on and continue into every subsequent generation. That would explain why, on Simchas Torah, after reading the end of V’Zos HaBrachah, a reading known as Chassan Torah, we literally roll back to the beginning to read Chassan Bereishis and restart the Torah cycle.

Perhaps, in the same vein, we do not merely begin the Torah again, but we begin a new cycle in Navi. (And maybe, this Haftarah selection hints to another crucial Torah-responsibility, though unfortunately often neglected, for a Jew to learn through all of Navi and perhaps Tanach at large. Why begin if we have no intention or aspiration of completing it?)

But, this discussion only covers the peripheral reasons for this Haftarah. In fact, this piece does happen to be the next part of Tanach. Yes, it is a new beginning. But, what does the opening of Yehoshua thematically add to or highlight in V’Zos HaBrachah?

Well, what exactly is the beginning of Yehoshua about?

The Navi begins [Yehoshua 1:1-2], “Vayehi Acharei Mos Moshe Eved Hashem Vayomer Hashem El Yehoshua Bin Nun Mishareis Moshe Leimor: Moshe Avdi Meis V’Atah Kum Avor Es HaYardein HaZeh Atah V’Chal HaAm HaZeh El HaAretz Asher Anochi Nosein Lahem Livnei Yisrael”-“And it was after the death of Moshe servant of Hashem, and Hashem said to Yehoshua Bin Nun, the attendant of Moshe, saying: Moshe My servant has died, and now get up, pass over this Yardein, you and this entire nation, to the land that I am giving to them, to the B’nei Yisrael.”

These two verses really say it all. In the end of V’Zos HaBrachah, the Torah tells us that Moshe Rabbeinu dies and is titled “Eved Hashem” [Devarim 34:5]. The Torah there also tells us that Moshe’s disciple Yehoshua Bin Nun is filled with a spirit of wisdom which he obtained from Moshe [Ibid. 34:9]. Sefer Yehoshua is not merely the next recorded work in Tanach, but it immediately followed Moshe’s death. It is the continuation of the selfsame story. It is historically what happened next.

Indeed, if one looks at Sefer Yehoshua, one will see that this Haftarah is certainly all of those things. And yet, it is so much more. Yehoshua himself is much more. He is not merely the “next leader,” the “next chapter” in Tanach or history. Moreover, he is not coincidentally Moshe’s successor. Our Haftarah demonstrates that Yehoshua—his leadership and mission—is the continuation of Moshe himself.

Yehoshua as a prophet and a book, in all ways, harks back to his relationship with Moshe. For example, in Parshas Ki Sisa, the Torah tells us that Yehoshua would not “remove himself” (“Lo Yamish”) from Moshes’s tent of study [Shemos 33:11], and yet, in our Haftarah, Hashem utilizes the same expression when commanding Yehoshua not to allow the Torah of Moshe to be removed (“Lo Yamush”) from his mouth [Yehoshua 1:5].

Moreover, the opening of Yehoshua apparently revolves around the the absence of Moshe Rabbeinu and how it relates to Yehoshua is demonstrated by Hashem’s reiteration of Moshe’s pep-talk to Yehoshua; Moshe had publically told Yehoshua, “Chazak Ve’Ematz”-“Be strengthened and encouraged” [Devarim 31:7], and Hashem apparently followed suit with the selfsame message here twice [Yehoshua 1:6 and 1:9], “Chazak Ve’Ematz.”

Yehoshua is told that so long as he follows Moshe, he would be treated likewise and be obeyed [Yehoshua 1:5].

Yehoshua’s very first instruction is to complete the mission which Moshe could not, and that was to enter the B’nei Yisrael into the Promised Land of Israel.

And if one looks throughout Yehoshua’s life, this list of connections goes so much further. In our Haftarah, Yehoshua revisits Moshe’s deal with the tribes of Reuven and Gad about their living outside the border of Eretz Yisrael [Yehoshua 1:12-14]. Yehoshua, like Moshe at the scene of Kabbalas HaTorah [Shemos 24:7], is reassured with the words “Na’aseh” (“We will do!”) and “Nishma” (“We will listen!”) in that order [See Shemos 24:7 and Yehoshua 1:16-17].

Later in his life, similar to the way Moshe was, Yehoshua is commanded regarding the removal of his shoe. Later, similar to the way Hashem caused the Yam Suf to part in Moshe’s time, He causes the Yardein to stand by for Yehoshua. Moshe carries Yosef’s bones out of Egypt. Yehoshua ultimately arranges for their burial in Eretz Yisrael. Anyway, you get the idea.

But, what is the point of all of this? Yehoshua teaches us that we do not exist in a vacuum. We’re not merely a new beginning. Indeed, the world did not begin with us. We are a part of something larger. We are connected to our past as links in the Mesorah (tradition), which means that we cannot allow the progress of those who came before us to just stop at their deaths. We have parents, grandparents, teachers, perhaps even peers and siblings whose work needs to be continued.

In Yehoshua’s case and certainly in all of our case, we carry the legacy of the Toras Moshe. We have tradition from our Rebbeim. We have Chazal and Mesorah that goes back as far as Moshe. That tradition entails that we adhere to and carry forth that tradition. It entails our realization that, as we argued earlier, the Toras Chaim does not end, but proceeds forth in every subsequent generation. That’s why, when we “finish” the Torah, we do not merely begin again with Bereishis, but we go further with Yehoshua. We have to be students to the Torah and its Mesorah. We have to see each and every generation and day as building on the previous ones. We have to do our part in continuing and transferring that Mesorah as, in fact, we are not quite finished.

May we all be Zocheh to be true students to the Torah and Mesorah, not only review the Torah again and again, but to push further in Torah and be links for the future, carrying the Torah of our leaders, Chazal, and Rebbeim all the way until the final Geulah and the coming of Moshiach, Bimheirah Biyomeinu! Chazak! Chazak! V’Nis’chazeik! Have a Great Sh’mini Atzeres/Simchas Torah!
-Yehoshua Shmuel Eisenberg 🙂