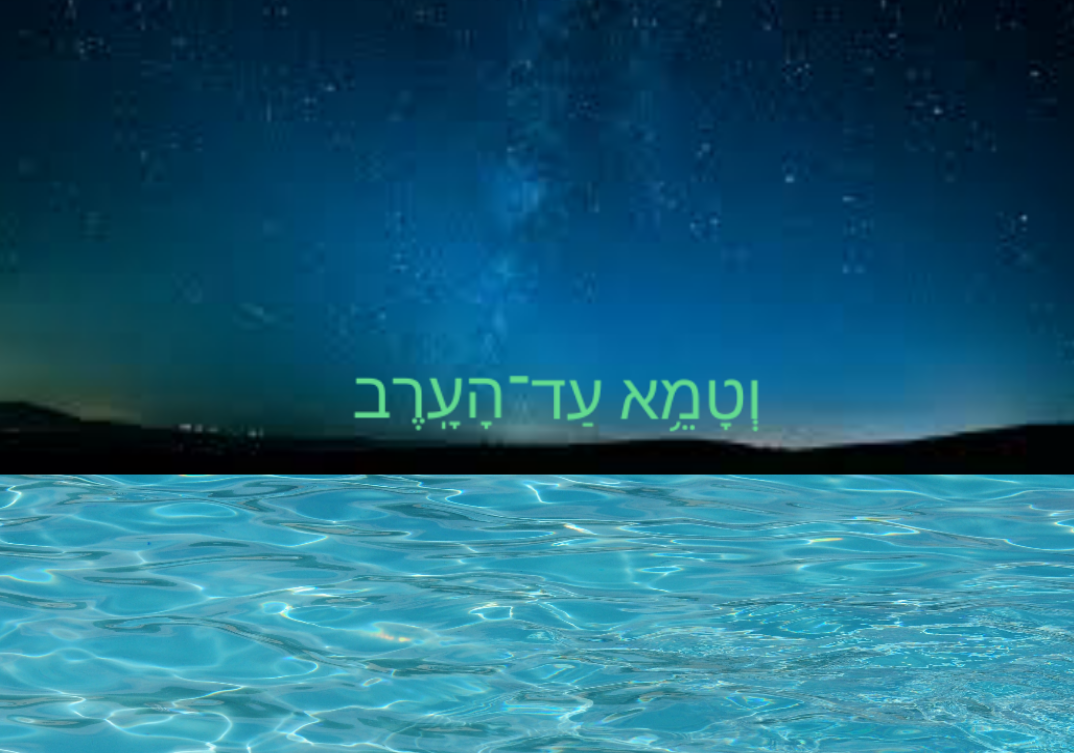 ● Why is an individual undergoing ritual purification “impure until evening”? ●

The Torah completes its major series of laws related to Tumah and Taharah with the discussion of the Metzora’s purification process and the ritual impurity that is associated with the discharge of various bodily fluids. Included in the Sidrah’s topics are the different ways one can become Tamei as well as the procedures for restoring one’s Taharah.

This stipulation of being impure until evening is the consistent common demoninator of almost all of the purification process described in the Sidrah, with few exceptions.2 With that said, it would appear as though there is some deep significance to this rule of Tumah. It appears to be a “theme” of these passages if we can call it that. The question is what this theme tells us.

As far as the simple meaning of the words goes, the Torah is apparently informing us that after one has somehow come in contact with ritual impurity and has completely immersed his body in the water as the Torah prescribes, indeed, he is not yet cleansed until nightfall. The question is why that should be the case. Why can’t he just take a dip in the Mikveh, the gathering of purifying waters, and call it a day? If it were about mere filth, there is no reason why it would not come off with soap and shampoo. Yet, none of those things work. Even the immersion alone will not work. He is almost invariably impure until evening. Why is this step, this waiting period, necessary for the procedure? What is the meaning behind this condition of “V’Tamei Ad HaErev”?

Now, although, as was mentioned this stipulation of “V’Tamei Ad HaArev” is present in most of the procedures for ritual purification described in this Sidrah, it is not found in some of the most extreme of Tumah-cases, cor example, in that of the Metzora, the spiritual leper for lack of a better term. The one who is inflicted with Tzara’as, the spiritual malady, whether for committing slander or one of multiple other possible sins, has the most extensive purification procedure which includes unique offerings, shaving, and other odd rituals.3 However, when it comes to his immersion, that which almost all purification procedures have in common, the Torah states, “…V’Rachatz Es Bisaro BaMayim V’Taheir”-“…and he shall wash his flesh in water, and thus become pure.”4 He is instantly restored to a state of purity. Whatever the reason is that most individuals have to wait until evening, why should the Metzora be different? Why doesn’t he have to wait until the evening?

Ultimately, the rules governing Tumah and Taharah are indecipherable statutes. As long as we live on this earth as we know it, they will remain an enigma. We can only speculate.

Having said that, many believe that the peculiar ramifications of the laws of Tumah and Taharah are multilayered and demonstrate various underlying Hashkafos or philosophies, which may have larger implications for us, even outside the world of technical, ritual purity. For example, the concept of becoming impure has been associated throughout Chazal and later Rabbinic literature with falling victim to sin, another form of spiritual impurity that taints one’s soul.

Ritual impurity in all of its “forms” can perhaps be thought of as a spiritual darkness. In the context of sin, that darkness might be represented by the snare of one’s Evil Inclination which pressures him to commit the sin. This personal “darkness” may be an addiction. It may be the result of a sudden Taivah or desire for sin at hand. Whatever the source, there is a darkness. The first step to spiritual purity, or in this case Teshuvah, repentance, is obviously to acknowledge that sin. Only then can one begin fixing his ways and entirely cleansing oneself of the sinful habit. This feat may be symbolized by immersing in the Mikveh waters. It is a most necessary first step.

The limitation though is that true rehabilitation requires more than a short period of “being clean.” There are limits to the purifying waters. This much is reflected in a statement of the Rambam where he compares Vidui, or confession in the Teshuvah process, to immersion in a Mikveh.5 And there, Rambam states, for example, that just as one who dips in a Mikveh while yet holding a Sheretz, an impure creature, in his hand, remains impure. The same holds true, explains the Rambam, for one who confesses his sin without sincerely repenting in his heart, resolving not to continue his sinful ways.

Perhaps in the realm of ritual Tumah as well, the person is not suddenly “pure” just because he immersed. Any sin, no matter how great or how minute, requires some rehabilitation. How much might depend on the sin and the individual’s gravitation towards that sin. But, in the meantime, he who is pure has to go through a complete status change, a spiritual reversal, which may not be as simple as a single act of immersion. He is not immediately pure, but he is rather on probation—“Tamei Ad HaArev”-“Impure until the evening.”

Turning back over to the world of sin, this stipulation might mean that one still has to be concerned about that specific challenge until that dark time—“the evening”—comes around again. When he finds himself in the snare of enticement, we can truly ascertain his status. How will one react when that situation befalls him again? Rising to the occasion at that point is when one has demonstrated a full Teshuvah and has achieved the state of Taharah again. Indeed, Chazal famously teach, and Rambam cites them in Halachah, that complete Teshuvah for a given sin is achieved upon withholding from that sin when the opportunity to commit it arises again.6

The question then is why the Metzora’s procedure for purification should be different, that he does not have to wait until evening. What, fundamentally, is the root of waiting until evening? Why, for the other cases, isn’t the immersion enough?

When discussing Tumah, we are obviously we’re not referring to literal or even tangible filth or dirt. It’s spiritual impurity that, as was mentioned, has many forms. For this reason, a physical act of immersion, though necessary, perhaps could not be sufficient, “magical” as the Mikveh waters may be. As was established, perhaps true purification requires the onset of “evening” when the darkness returns. But, perhaps we can suggest a couple of additional possibilities.

As per the multilayered nature of the rules of Tumah, we were able to identify some relevant philosophies about our relationship with G-d as pertains to sin. But, perhaps, there is an even deeper layer within this discussion that pertains to the spiritual darkness that contaminates relationships of all kinds. One’s relationship with G-d, like all relationships, must be dealt with delicately and sensitively, especially when you have wronged the “other” in the relationship. When one has wronged the other, it is virtually never enough for the two individuals to merely go through the motions of shaking hands, or “hugging it out.” In fact, sometimes, even uttering the words “I’m sorry” and committing sincerely to be more careful next time, alone, will not be enough. In the same vein, one who is hurt will often not be cheered up by a list of clichés or platitudes.

Perhaps in that same vein, immersion will not be enough. Sometimes, one needs time to heal the wound. Sometimes, one needs time to appreciate the gravity of the situation, the sensitivity of the relationship. One needs to reflect on the situation, think about the cause of one’s spiritual impurity and how to avoid getting caught in that situation again. This reality may hold true for one’s relationship with even G-d Himself, as it were.

VIEW THE SCENERY: A Most Beautiful Sunset

And yet, perhaps another ingredient that might be necessary for purity in the context of repentance is simply allowing the proverbial sun to set on the day of spiritual impurity. One needs to put the spiritual filth behind him and leave it forever in the past. Taharah requires one to move forward from yesterday because “Tomorrow is a new day,” and indeed, the new Halachic day begins after nightfall.

CIRCLING BACK: The Metzora’s Purification

Of course, based on these suggestions, why the Metzora should be different can begin to make sense. His entire purification procedure demonstrates the spiritual gravity of the situation that he has gotten himself into by engaging in sin. Aside from his offerings and rituals he is made to engage in, which Chazal teach us, are designed to humble him, the Metzora had already spends a week isolated from the community with all of the time to reflect as well as many sunsets to mark a new start for him. That he is completely shaved also marks this new beginning. After the intensive and extensive procedure, simple immersion might be more readily effective in the reestablishing of his relationship with G-d and the community around him.

But what emerges is that for Metzora, as we find by most other individuals who are Tamei, the immersion alone is insufficient. For the Metzora, so much more is needed to make things right. That it requires so much rehabilitation before the Metzora can even engage in immersion demonstrates the gravity of the Metzora. But once he is there, he is ready to bounce back.

In the end, the Torah’s emphasis on the gravity of Tumah and Taharah should serve as a reminder of the sensitivity that is needed when cultivating a relationship with Hashem, or really, with anyone. The laws of Tumah and Taharah can and should be utilized to inspire one in his spiritual development and assist one in his pursuit of Taharah in all its forms.

May we all be Zocheh to properly apply the lessons of spiritual purity, be sensitive to our delicate relationship with Hashem, cleanse ourselves from all impurity and merit the swift arrival of the Geulah, in the days of Moshiach, Bimheirah Biyomeinu! Have a GREAT Shabbos HaGadol!
-Yehoshua Shmuel Eisenberg 🙂