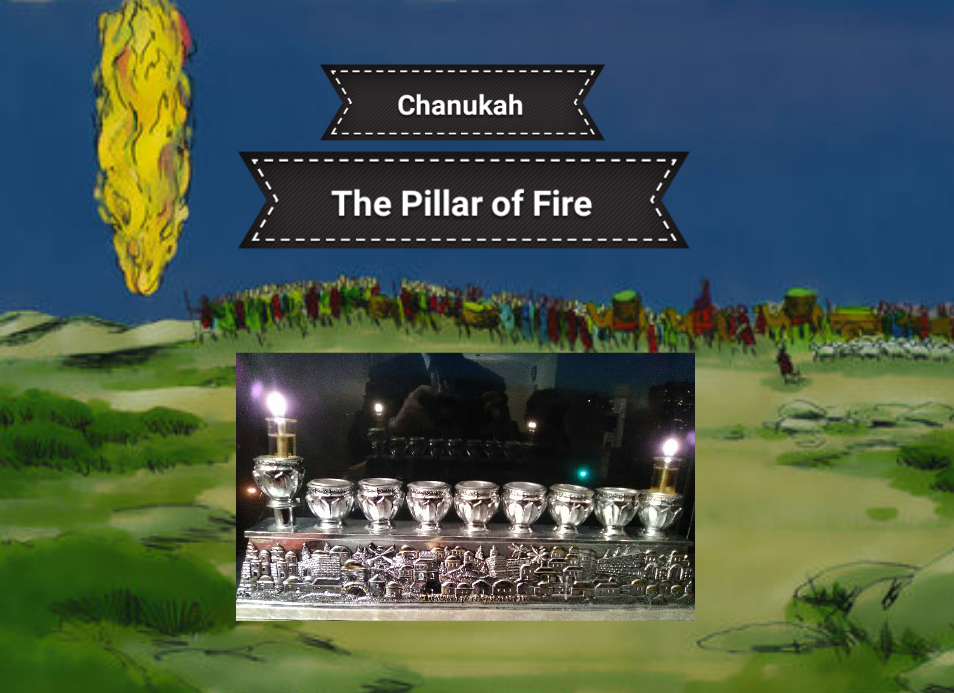 “Chanukah: The Pillar of Fire”

The Sfas Emes (1847-1905) makes a ground-breaking suggestion, that for each of the Biblical holidays of the Shelosh Regalim (Three Pilgrimages), there is a Rabbinic holiday which serves as its “Toldah,” its sub-holiday or “progeny” as it were. The apparent idea of this “Av–Toldah” relationship between the holidays is that sub-holiday would somehow reinforce the ideals, reignite energy, and perhaps build on the themes of its respective “father festival.”

In this vein, the Sfas Emes suggests that the eight festive days of Chag HaSuccos (with Sh’mini Atzeres) are the “predecessor” to the eight days of Chanukah, that Chanukah is the progeny of Succos.

Derived from Succos – The Connections

If one meditates on this apparent relationship between the holidays, one will notice how the laws, rituals, and customs of Chanukah, in many ways, seem to be derived from and reflect off of the holiday of Succos.

For example, when describing the most ideal way to kindle the Neir Chanukah (Chanukah lamp) or Menorah, unlike the commonly practiced tradition of Beis Hillel, Beis Shamai held that the number of Neiros (“candles”) per night follow a descending pattern, beginning from eight and gradually decreasing until the final night on which one lights only one Neir.1

The Gemara records various rationales for the differing opinions. Among them, the Gemara suggests that the tradition of Beis Shamai is derived from none other than the “Parei HaChag” (lit., “the Cows of the Festival” [of Succos]), the Korbanos of Succos which are offered day by day in the same descending pattern, eight to one.1

Furthermore, both the S’chach (overhead covering) of the Succah and Neir Chanukah need to be visible to observers. Accordingly, they have to be positioned at least within the height limit of twenty Amos2; otherwise they are not “Shalta Ba Ina,” within eye-level.

Additionally, what makes a place one’s home is an important discussion that pertains to both holidays, as on Succos, the Halachah is such that the Succah must become one’s home, and on Chanukah, the location where one lights the Menorah must as well be classifiable as one’s home. On both of these holidays, “home” is defined by the structure in which one eats and sleeps.

Both holidays place a unique emphasis on Hiddur, the beautification of Mitzvos, in a way which we do not find concerning other Mitzvos.3 Although there is a general concept of Hiddur Mitzvah that applies to Mitzvos broadly, the Four Species that are taken on Succos are disqualified if they lack requisite, aesthetic beauty.

Similarly, on Chanukah, the widespread custom is to fulfill the Mitzvah of Neir Chanukah in the most optimal way, known as Mehadrin Min HaMehadrin, the most beautiful of the beautiful (i.e. kindling multiple lamps corresponding to the nights of Chanukah as a opposed to the bare minimum “Neir Ish U’Beiso”-“one lamp per individual household”).1 This standard of “Mehadrin Min HaMehadrin” is unheard of for other Mitzvos.

Both Chanukah and Succos, in a sense, celebrate the Holy Temple, as the holiday of Succos corresponds to the B’nei Yisrael’s construction of the Mishkan and Chanukah celebrates the rededication of the Beis HaMikdash.

These are just a few among the many hidden connections between Biblical holiday of Succos and the Rabbinic holiday of Chanukah.4 The question is what exactly we are to make of these connections. Suppose Chanukah is related to and derived from Succos. What are we supposed to do with that information? How does the memory of Succos inform our understanding and observance of Chanukah? Or, how might Chanukah reinforce and perhaps build on Succos?

Chanukah: The Pillar of Fire

If there is, in fact, a deeper connection between Succos and Chanukah, as the Sfas Emes suggests, perhaps we could suggest this further, incredible possibility of a connection.

The Torah records that the Succos or “booths” which we build on the festival of Succos commemorate the Succos that Hashem had sat us in as we traveled through the wilderness.5 Though there is dispute in tradition6, the commonly accepted opinion is that the “booths” which the Torah has us commemorate are actually the Ananei HaKavod, the Clouds of Glory which protected us from the external dangers of the desert.

Now, according to various Midrashim7, the Ananei HaKavod were one and the same with the Amud Anan, the Pillar of Cloud which led the nation through the desert by day, as the Torah describes in the narrative of the Exodus from Egypt.8 Accordingly, if it is true that Succos correspond to the Pillar of Cloud, then perhaps we can suggest that Chanukah corresponds to the partnering Pillar of Fire, the Amud Eish, which the Torah tells us in the same verse, led the people through the desert by night!

Although this may sound like an overly creative stretch, the Rashba9 actually draws a direct comparison between the time slot for the Mitzvos of Neir Shabbos and Neir Chanukah and that of none other than the Amud Eish; he explains that just as the Pillar of Fire arrived while it was yet daytime and even overlapped with the Pillar of Cloud, so too, in his opinion, one may light these Neiros Shel Mitzvah even before sunset! Thus, the Neir Shel Mitzvah of Chanukah corresponds to the Pillar of Fire!

As fascinating as a possibility as it may be, that Chanukah, and particular Neir Chanukah, somehow corresponds to the Amud Eish of the Exodus, what exactly are we supposed to take from this symbolism?

Before we answer that question, let us consider some of the differences between Succos and Chanukah. Although we have noted that the two holidays have a lot in common, they actually have a lot in direct contrast to one another.

Succos emphasizes the concept of Tzeil, shade10, whereas Chanukah is a festival of lights.

One of the unique, ancient rituals performed on Succos was the Nisuch HaMayim, the Water Libation, and as was mentioned, Succos celebrates clouds—objects of water vapor. These two points would lead one to the conclusion that the element of Succos is that of water.

Chanukah, by contrast, celebrates the miracle of the oil which kindled the flames of the Menorah. Certainly, if Chanukah is a hidden celebration of the Pillar of Fire, the element of the day would be none other than fire.

Though as was mentioned, both Succah and Neir Chanukah have the same height limit of twenty Amos so that they may be seen by observers, there is a marked difference between the “viewers” of the Succah and those of the Neir Chanukah.

The Torah states that the B’nei Yisrael should dwell in Succos, “L’ma’an Yeid’u Doroseicheim Ki BaSuccos Hoshavti Es B’nei Yisrael…”-“so that your generations shall know that I sat the B’nei Yisrael in booths….”5 Accordingly, the S’chach must be situated as such so that those sitting in the Succah will be able to see it and have that prescribed knowledge of Hashem’s providence. In other words, the miracle of Succos has to be perceived and remembered by those performing the Mitzvah itself.

However, the Pirsumei Nisa, or the publicity of the miracle, which Chanukah requires, was primarily designed for the passersby outside the home—even mere spectators of the Mitzvah. Thus, even one who is not fulfilling the Mitzvah himself can recite a blessing and acknowledge the miracle upon seeing another’s Neir Chanukah.11

All of the above connections and points of contrast lead us to this central point of contrast, and that is the “direction” of the impact of each of the two holidays. The impact of Succos is “outside-in”; Succos requires one step into a spiritually sheltered environment. Like the Clouds of Glory, Succos is a holiday of insulation and isolation from the outside world, even the world within our own homes. It is protection from the influences and threats of the surrounding nations of the world. Like water, it serves our most basic of needs. It is a sign of Divine Providence which we are charged to recognize.

On the other hand, Chanukah’s impact is “inside-out.” It begins with a light from within that is shined forth towards the outside world. Like the Pillar of Fire, it is the light that leads us through the darkness of exile, providing us a sense of direction. It is the brazen response and counter-attack to the nations of the world, the Hellenists who seek to influence and assimilate us. It is a sign which the world must be shown.
In short, if Succos is protection, Chanukah is projection.

In virtually this exact vein, R’ Shimshon Raphael Hirsch differentiates between the Mashkof—the lintel, and the Mezuzos—the doorposts, the two locations of the house which received the blood of the Korban Pesach at the time of our Exodus.12

There, R’ Hirsch explains that the Mashkof represents the roof of the home which is symbolic of the physical protection which our homes provide. This protection, we may argue, is the very providence that Hashem provides through the S’chach on Succos.

On the contrary, the doorposts which surround the doorway on either side represent the walls, symbolic of the social protection within one’s home. It is perhaps not a coincidence that one who is lighting the Neir Chanukah by his doorway does so opposite his Mezuzah so as to surround himself by the two Mitzvos.2

Back to the Sfas Emes

With all of the above in mind, we can return to the suggestion put forth by the Sfas Emes and reflect on what it might mean for us. What is the meaning behind this parent-child relationship between Succos and Chanukah?

On the one hand, Chanukah reinforces the themes of Succos. Although the display and setting were certainly not the same during the miracle of Chanukah as we were sheltered in G-d’s supernatural Succos in the wilderness, the miracle of Chanukah was no less a result of Hashem’s Divine Providence. It was He Who protected us and assured our victory against the threatening nation. On Chanukah, we make a point to acknowledge Hashem’s hand both within nature and without, whether we’re thanking Him for the miracle of the unlikely military victory or the supernatural oil that lasted beyond its supply.

But, beyond that, Chanukah builds on the miracles of Succos, lighting the way for us in a time when G-d’s Presence is less obvious. It is the rare reminder that Hashem is still with us in exile. It is the inner fire which we must shine forth and project to the nations of the world that we recognize that even if we must uphold the Ratzon Hashem by ourselves, we will not ultimately be alone. It is the Pillar of Fire.

May we all be Zocheh not only to Divine Protection and Providence, but to Hashem’s guiding light in the darkness of exile, so that we may follow that light and project it to the world at large, and Hashem should shine the light of our Geulah and the coming of Moshiach, Bimheirah Biyomeinu! Have a Great Shabbos Chanukah/Chag Samei’ach/Rosh Chodesh Teiveis!

Moreover, the historical albeit apocryphal Book of Maccabees II reports that the Jews celebrated the Chanukah miracle for eight days as sort of a compensation for the Succos which they had apparently neglected to properly observe that year.