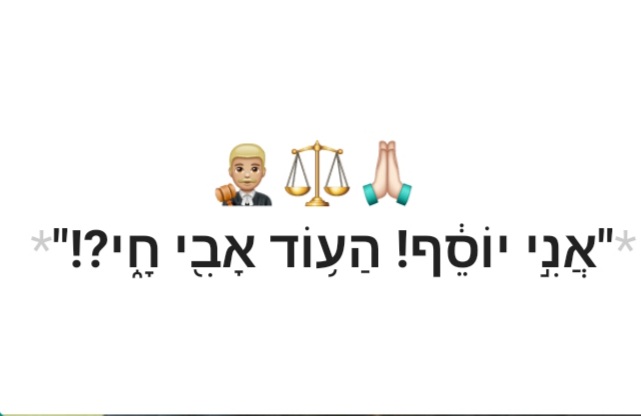 The following D’var Torah is also available on my Torah podcast, here:
https://jewishpodcasts.fm/thedatabeis/7121

“Is My Father Still Alive?”

The long and painful story of Mechiras Yosef culminates in the grand reunion between Yosef and his brothers which unfolds in Parshas Vayigash. Although the ending is a happy one, we have to be bothered by the unflattering beginning.

Moreover, we have to wonder what we’re supposed to take away from the story. What is the “moral” of Mechiras Yosef? Is it, “Don’t kill and/or sell your brother”? If it’s that easy, why couldn’t Yosef’s brothers figure that one out?! Even if the brothers weren’t our exceedingly righteous and wise ancestors, most regular humans know not to kill people who don’t deserve it. Obviously, it is more sophisticated than that. There is certainly something more here.

In fact, various commentators from Rashi to Sforno, to R’ Shimshon Raphael Hirsch and others understood that much and have explained, in different forms, that Yosef’s brothers actually formed a Beis Din (judiciary) and issued a P’sak Din or Halachic ruling that Yosef was actually liable to death. Evidently, their ruling was incorrect, but they didn’t merely decide they were just sick of the favorite son tattling on them. Again, most “regular” people recognize that that alone is not enough of a reason to kill a person.

“Is My Father Still Alive?” – The Beis HaLevi

But, if the above is true, there is a problem. Chazal teach us that when Yosef finally revealed himself to his brothers, he pierced them with the fiery words of Mussar or rebuke, “Ani Yosef HaOd Avi Chai?”-“I am Yosef! Is my father still alive?” [Bereishis 45:3; See Chagigah 4B]. Wherein these words lies the rebuke? The Beis HaLevi famously explained that Yosef challenged his brothers with a rhetorical question, as if to say, “Did you care about MY father’s wellbeing when you sold me so many years ago?”

The problem though is as follows: If, indeed, the brothers “Poskin’d” that Yosef should have rightfully been executed, why should their father’s feelings on the subject have mattered? From their vantage point, that was apparently the Halachah! Yosef was liable! Granted, they ruled incorrectly. But, why would Yosef challenge their decision with an emotional argument about their father’s feelings?

The first step to answering this question is recognizing that Yosef was only responding in kind to the argument made by his brothers, Yehudah in particular. When Yosef, then a masked viceroy, framed Binyamin for theft and sentenced him to a lifetime of slavery, Yehudah argued quite simply that he had committed himself to protecting Binyamin by all means and that he could not bear to witness the anguish of their father should Binyamin not return safely home [Bereishis 44:32-34].

To this, Yosef essentially argued: “Since when do you care?” And, indeed, this should be our question. Since when was their father’s emotional response a variable in their decision making? Hadn’t they done what they thought was the right thing? And this is where we start to understand what Yosef had in mind when he staged Binyamin’s theft and what exactly the brothers had done wrong.

Isn’t it interesting how Yehudah abandons any arguments of justice and wholly resorts to an emotional argument, asking for mercy? That is because, according to the rule of justice, there was no argument to be made. Even though, in truth, Binyamin really was innocent, as per Yosef’s plot, to the knowledge of everyone else, Binyamin was guilty. In all “fairness,” Binyamin would rightfully remain a slave. And yet, Yehudah could not let it happen. Thus, while cornered at Yosef’s mercy, Yehudah appeals for just that; mercy. Why the sudden shift?

The truth is, this shift didn’t merely occur here. If one reminds back to Parshas Mikeitz, after being interrogated by Yosef, the brothers suspect that the deed of Mechiras Yosef is coming back to haunt them and then, they seem to begin displaying such a change of heart. Thus, they confessed amongst themselves; “Aval Asheimin Anachnu Al Achinu Asher Ra’inu Tzaras Nafsho B’His’chaneno Eileinu V’Lo Shamanu Al Kein Ba’ah Eileinu HaTzarah HaZos”-“But indeed, we are guilty on account of our brother whose distress we saw when he was pleading to us and we did not listen; therefore, this distress has come to us” [Ibid. 42:21].

But, the question remains: If Yosef’s brothers made a judgment call based on their understanding of what was correct and just, why has their perspective shifted?

Moreover, if they ruled in accordance with what they understood to be the Halachah, what was wrong with acting in accordance with that Halachah? Why should it have mattered that they didn’t have mercy in the place of justice? Were they supposed to be merciful at the expense of what they thought was the Halachah? Granted, they ruled incorrectly; they had misjudged. But, if so, that was their unintentional sin. What does their attention to mercy have to do with that? How are we supposed to understand Yosef’s Mussar of “Ani Yosef HaOd Avi Chai”?

Indeed, at no point were the brothers expect to entirely sacrifice justice for mercy. What is right is right. And if the brothers merely Poskin’d incorrectly, they might have carried no blame. The problem was not that they chose Halachah over emotion, or even justice over mercy.

Rather, the problem was that they lacked any trace and perspective of mercy when they carried out justice. They did not employ Rachamim in their P’sak Din. Yes, they ruled in accordance with their understanding of the law, but with Achzariyus (brazenness) and not a heavy heart. And had they ruled with a mindset of mercy, considering their brother’s distress and father’s eventual anguish, maybe, they would have been motivated to turn over every stone to find even an ounce of merit, some reason to spare their defendant. Had they considered the real life emotional impact of their ruling, perhaps the P’sak would remain the same. Indeed, Halachah itself is unchanging. But, in this case, they were wrong, and with a more merciful agenda, they might have been invested enough to rethink their Halachic ruling for a second and realize that maybe indeed they were mistaken.

Indeed, years later, when Binyamin was “on trial” and they lacked any answers on the basis of justice, they experienced what it means to be desperate for favorable judgment. Yehudah could come up with nothing more than the fact that he was personally invested and that his father would be pained.

Now, we understand the relevance of Yosef’s Mussar. No, the message is not that Rachamim necessarily overpowers Din, or that humanity and emotion beats out Halachah. But, that Din is to met with utmost Rachamim, with a yearning for Rachamim. Halachah is to be upheld always, but with the profound understanding of humanity and the emotional impact of that ruling. When the brothers ruled against Yosef, that was absent. When they finally ruled on behalf of Binyamin, that was all they had. Thus, Yosef pressed them, “where was this concern for MY father’s wellbeing earlier?” Where was that concern for family, that desperation for favor? “Ani Yosef! HaOd Avi Chai?”

May we all be Zocheh to always uphold Halachah and Hashem’s every Ratzon, but to always yearn to do so with mercy and find merit in one another, and Hashem should guide us with the light of the ultimate truth and mercy with the coming of the Geulah in the times of Moshiach, Bimheirah BiYomeinu! Have a Great Shabbos!