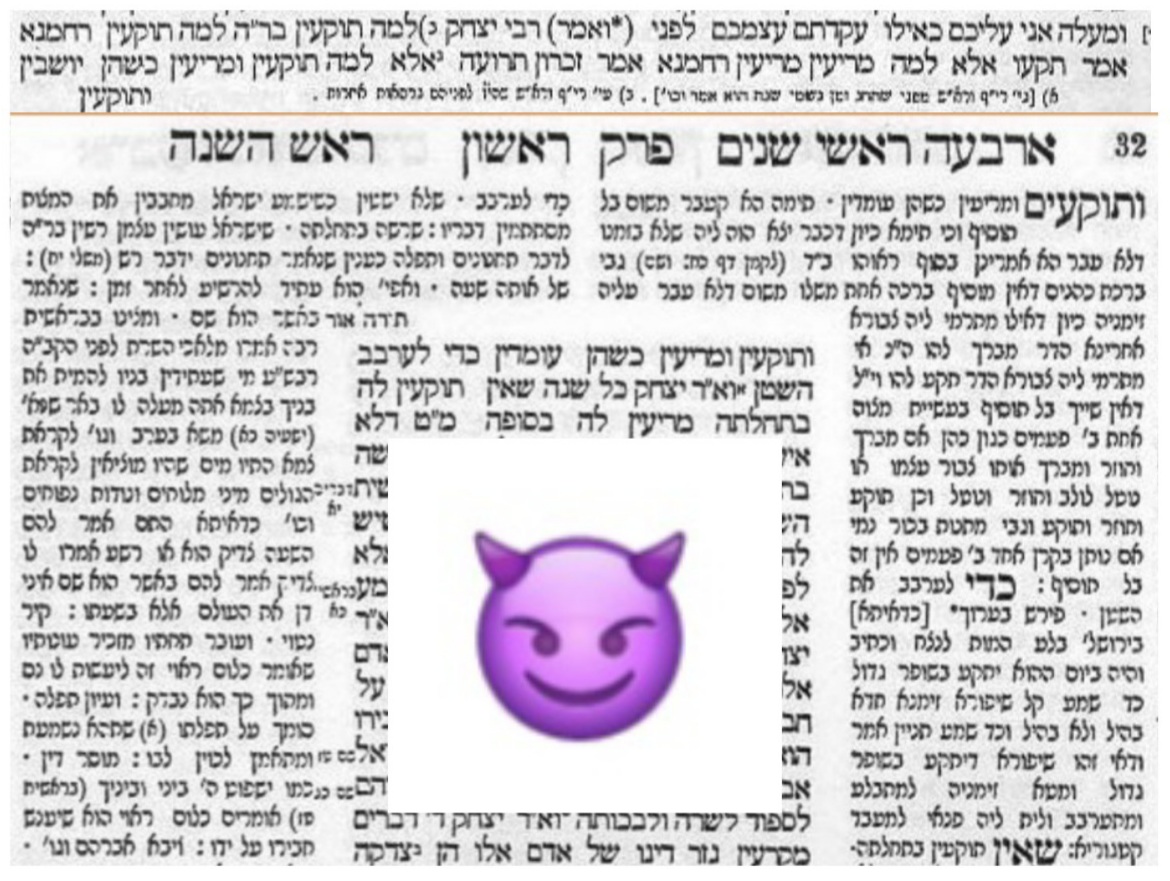 Now, why exactly did Chazal institute these two sets of Tekiyos? The Gemara answers famously, “L’Arbeiv Es HaSatan”-“to confound the Satan.”2 Apparently, the combination of these Tekiyos or the inclusion of an extra set of Tekiyos somehow withholds the Satan from impeding us on the Day of Judgment. But, what exactly is so confusing and bewildering about these extra Tekiyos?

Does the Satan fall for it every year?

That is the other, obvious, age-old question on this tradition. Indeed, not only is it unclear why the Satan would be thrown off by extra Shofar blasts, but it is strange that the implication of the tradition is that the supposedly crafty Satan falls for this “trick” every single year. How in fact is it that the Satan always ends up discombobulated by our extra Tekiyos?

Before we can understand how it is that the Satan is repeatedly confounded by our Tekiyos, we have to answer our first question, what it is about the Tekiyos that discomfits the Satan the first time. What is the basic interpretation of this tradition?

There are three basic explanations of the tradition offered by the classical commentators.

The first explanation is offered by Rashi and Rabbeinu Chananeil who suggest that the extra Tekiyos are a gesture of our Chavivus or affection towards Hashem’s Mitzvos. By going above and beyond, blasting the Shofar more than the requisite amount of times, we display our affection for Mitzvos in general which projects us in the best light in the face of the Satan’s accusations.

Rashba and Ran cite an alternative opinion (in the name of “Yeish M’forshim,” or various “commentators”) that the extra Shofar-blasts are designed to humble our Evil Inclinations, i.e. the Satan within ourselves. By blasting the alarming sounds of the Shofar beyond the Biblically prescribed amount, we awaken a sense of humility, such that we will be withheld from sin. In this vein, they quote the verse, “Im Yitaka Shofar B’Ir V’Am Lo Yecheradu?”-“Should a Shofar should blast in the city and the people not tremble?”3

Finally, Tosafos, Rashba, Ritva and Ran cite the explanation of the Aruch4 based a tradition from the Talmud Yerushalmi that the Satan suspects that additional, “unscripted” Shofar blasts are the ones which, the Navi prophesied, will sound with the arrival of the final redemption5 at which point the Satan will be eliminated forever.6

Now that we have a few solutions as to what about the Shofar blasts confuses or confounds the Satan, we can attempt to answer the second question, namely, why and how it works every year.

The answer to this second question varies depending on which of the above answers one applies. As for the first answer, it is quite simple why the same trick works every year. The truth is that it is not really a trick. If we make an annual appeal to demonstrate our affection for the Mitzvos, there is no reason why that appeal shouldn’t hurt the Satan’s case against us. As long as we continually display that affection, he will always be impeded.

This holds true for the second answer as well. If the extra Tekiyos are really meant to humble our own inclinations, the ability to take the loud blasts to heart exists every year. Here too, it is not so much of a trick. It is an alarm calling for our awakening.

But, when considering the third answer, the question at first glance, does not go away. The first time we sounded the Shofar an extra set of times, perhaps the Satan was right to be worried that, indeed, it might have been the sounds of Moshiach’s arrival. But, if each and every year, we blast these additional sounds, why would the cunning Satan not recognize the routine and yet continue to be fooled by this “Moshiach fake-out”?

Is it a Fake-Out?

Perhaps the answer is that the premise of our question is completely incorrect. Perhaps our mischaracterization of the extra Tekiyos  as a “Moshiach fake-out” is the only real source of confusion here. Perhaps, in a certain respect, this label is an unfortunate, self-fulfilling prophecy. After all, who said that it is a fake-out? Why does it have to be a trick? The Satan is not a fool. Perhaps these Shofar blasts reasonably frighten the Satan because the Satan sees the real life potential for Moshiach’s arrival. Perhaps, if we are doing everything properly, our very Shofar blasts could reasonably usher in the final redemption.

And yet, after so many years, why doesn’t the Satan ever rest assured that are Tekiyos are just another false alarm? Because the Satan understands that, even if not last year, maybe this year will actually be the year. “V’Af Al Pi SheYismamei’ah Im Kal Zeh Achakeh Lo”-“Even though he may delay, with all of this, I long for him.”7 In fact, every year is only another year closer to the final redemption. Why couldn’t this be the year? Why is it that the Satan has greater Emunah (faith) and Bitachon (trust) in the coming of Moshiach than we do? The question, “When will the Satan get it?” is an admission that, unfortunately, we do not “get it”—that we do not fully appreciate how close the final redemption might be, that we do not appreciate our own reasonable potential to usher in that redemption.

It is fascinating to note that during the Yomim Nora’im, more than any other time of year, we make a most overt and elaborate appeal for the coming of Moshiach, as we pray that Hashem grant us “Tzmichas Keren Dovid Avdecha VaArichas Neir L’Ven Yishai Mishichecha Bimheirah BiYomeinu”-“flourishing of the ray of Dovid Your servant and the preparing of the lamp of the son of Yishai Your Moshiach (anointed one) speedily in our days!”

We can learn a lot from the Satan. And if we learn one lesson from our adversary, it should be that each subsequent year is not only as good a time, but by definition, an even greater time to expect the redemption. This year, as the Satan once again trembles and quakes at the sounds of our Tekiyos, with the same level of faith, trust, and even trembling, we should meditate on that possibility of Moshiach’s arrival, and indeed, with the sound of the Shofar, he should arrive, Bimheirah BiYomeinu!

Have a Great Shabbos, Rosh HaShannah, and a K’sivah V’Chasimah Tovah!