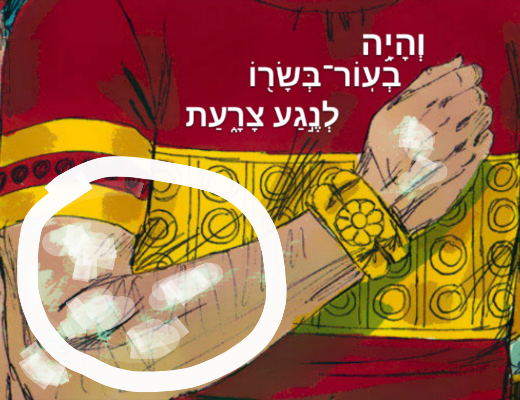 ● Why doesn’t the Torah indicate what causes Tzara’as? ●

Although Torah devotes a lot of time and space to the discussion of Tzara’as, it is not entirely clear from the Torah what exactly Tzara’as is, where it comes from, and why it exists. All we know is that it is “Tamei,” or “ritually/spiritually impure,” that it is typically white, and that there is a long, complicated procedure for one to purify oneself from it including consultations with a Kohein, offerings in the Temple, blood smearing, and shaving.

However, Chazal have identified various forms of conduct or personal attributes which cause an individual to be plagued with Tzara’as, most famously Lashon HaRa, or slander, among many others, such as bloodshed, false oaths, sexual immorality, pride, robbery, selfishness, etc.1 The idea of an association between Tzara’as and Lashon HaRa, as was explained earlier2, is supported by the couple of incidents where the Torah itself records cases of people being afflicted with Tzara’as in response to some statement of slander; Moshe Rabbeinu suffered from Tzara’as after slandering the B’nei Yisrael3, and his sister Miriam was plagued as well after slandering him.4

DISCOVERY: Why and How?

What is difficult, though, is that from the Sidros pertaining to Tzara’as themselves, one would have no inkling as to what the spiritual or divine implications of Tzara’as are. One would not know how to prevent Tzara’as from happening, or even what is so terribly wrong with the impurity that is associated with Tzara’as altogether. On the contrary, although Tzara’as is clearly related to spirituality, the Torah’s discussions of Tzara’as seem largely diagnostic and dermatological. The passages are not particularly inspiring aor spiritually influential, and some might even argue that they actually sound quite grotesque. The treatment of the Tzara’as victim or patient is harsh and unpleasant, and it is not entirely clear from the text what he did to be subject to it, other than the fact that he “was afflicted” with this rash we call “Tzara’as.” The Torah provides no list of Aveiros or transgressions which trigger Tzara’as. The question then, is why the Torah did not overtly identify Tzara’as as a Divine response to Lashon HaRa, for example, or to any other of the associated sins, in the text of our Sidrah. Why is there no apparent cause? If Tzara’as is not just “skin deep,” but actually has spiritual, metaphysical implications, why does the Torah not spell out more explicitly what those implications are? Why don’t we hear more about the basis of the impurity of this disease?

A ROAD MARKER: A Compass, not a Map

The first clue to understanding the idea of Tzara’as is that, indeed, as the Torah puts it, the Tzara’as somehow carries a spiritual impurity. While spiritual impurity is a somewhat difficult concept to grasp, that is what is granted from the Torah. Tzara’as equals impurity. It is definitely more than a discussion of infections and dermatology.

But again, why aren’t the Aveiros associated with the spiritual impurity presented outright in our manual that is the Torah? The Torah does not usually shy away from informing us what is right and wrong. Why does the Torah choose to conceal the causes of Tzara’as?

It could be that, really, although Tzara’as is a spiritual phenomenon, the discussion of Tzara’as, in some ways, truly was meant to be a largely diagnostical discussion. The Torah is telling us what the disease is, how it manifests, etc., but the deeper message is perhaps that all Tzara’as really is, is an ambiguous, manifestation of spiritual impurity. It is an unidentified, unexplained emanation of divinely negative energy.

But to ask which “unhealthy” Aveirah causes Tzara’as, which sins are “bad for the diet,” is just not a serious or productive effort. Because at the end of the day, all sins are bad, and there are apparently a whole slew of sins that can theoretically be associated with the spiritual disease. But as it is a spiritual disease, it is up to no “doctor” to tell us for sure what triggered our skin eruption. It is not a biological or biochemical matter that can be determined in a lab. Tzara’as is all a question of Divine messages through which G-d chooses to communicate with man.

In this vein, apparently, Tzara’as is more than just a response to an Aveirah. It represents some spiritual contaminant in the person’s life, and is therefore a broader reflection of a lacking in one’s relationship with G-d or fellowman. The enzyme or catalyst which produces Tzara’as is not directly quantifiable. Accordingly, one cannot always pin down a single action or sin to “work on.” One can venture. One can speak to a spiritual guide who knows him. But, one cannot know with one hundred percent certainty. In this way, Tzara’as is a road marker or a compass, but not a map. It tells one the direction he is going in, but does not reveal the direct path to the desired destination.

Why would Hashem format Tzara’as in this ambiguous way? Perhaps because G-d doesn’t merely afflict a person with Tzara’as to prevent him from doing sin X. G-d could tie man down if He wanted to, but that would violate man’s free choice and would therefore be pointless. The point of Tzara’as is to awaken man to engage in mindful and meaningful introspection, to do a little bit of soul searching and, on his own, figure out where, in his personality and character traits, he is lacking. It is a calling for Cheshbon HaNefesh, a reckoning of one’s soul, in which one can get to the root of the problem oneself and find out what sin he is committing, and more importantly, what is causing him to recurrently engage in the said sin.

Maybe he spoke Lashon HaRa. Maybe he murdered or committed adultery behind closed doors. Perhaps he is arrogant or dishonest. Who knows? What is more important is what led the person to these actions. And, obviously, that is not always so apparent. It is largely a matter between man and Hashem, and the Tzara’as patient has to look into himself to figure out where he went wrong in life. Tzara’as, in that way, is not a call to look into and evaluate one’s most recent course of actions, but rather into one’s Middos, his personal and spiritual attributes, which are the roots of all of his thoughts, speech and actions. Tzara’as might not tell us that “he spoke Lashon HaRa,” but that he is a “Ba’al Lashon HaRa,” a person who speaks or spoke Lashon HaRa, that some Midah inside him brought him to that negative action. It’s not that he once did an Aveirah, but that he allowed himself to somehow become a “Ba’al Aveirah.” It is the less apparent, negative Middos that evokes the “impurity” or negative spiritual energy that G-d is calling to man’s attention through Tzara’as.

Although the diagnosis of Tzara’as doesn’t exist in modern times, the message is no less crucial and goal of spiritual purity is yet attainable. Tzara’as, the spiritual compass, is no longer present, but our map, the Torah, is ever present. And if there is one lesson to take from Tzara’as today, it is that our actions carry meaning and have serious spiritual implications about who we are and about what Hashem thinks of us as individuals. Who we make ourselves out to be through our respective characters evokes a certain spiritual energy, whether negative or positive. Our words and actions therefore, don’t merely speak for themselves, but they articulate the personality of the deeper part of our souls and personalities. It is therefore, the job of man, in every generation, to construct himself from the inside out, to craft his spiritual temperament and inner self, and thereby emanate an honorable splendor of spiritual purity. It takes a great deal of soul-searching, but if we are willing to engage in that search, with G-d’s help, we will be sure to find.

May we all be Zocheh to refine our respective spiritual characters, carry ourselves with spiritual purity, leave behind all impure traces of Aveirah and Tumah, and we should merit the display of Hashem’s unlimited measure of spiritual purity in the times of Moshiach, Bimheirah Biyomeinu! Have a Great Shabbos HaChodesh/Rosh Chodesh Nissan!
-Yehoshua Shmuel Eisenberg 🙂