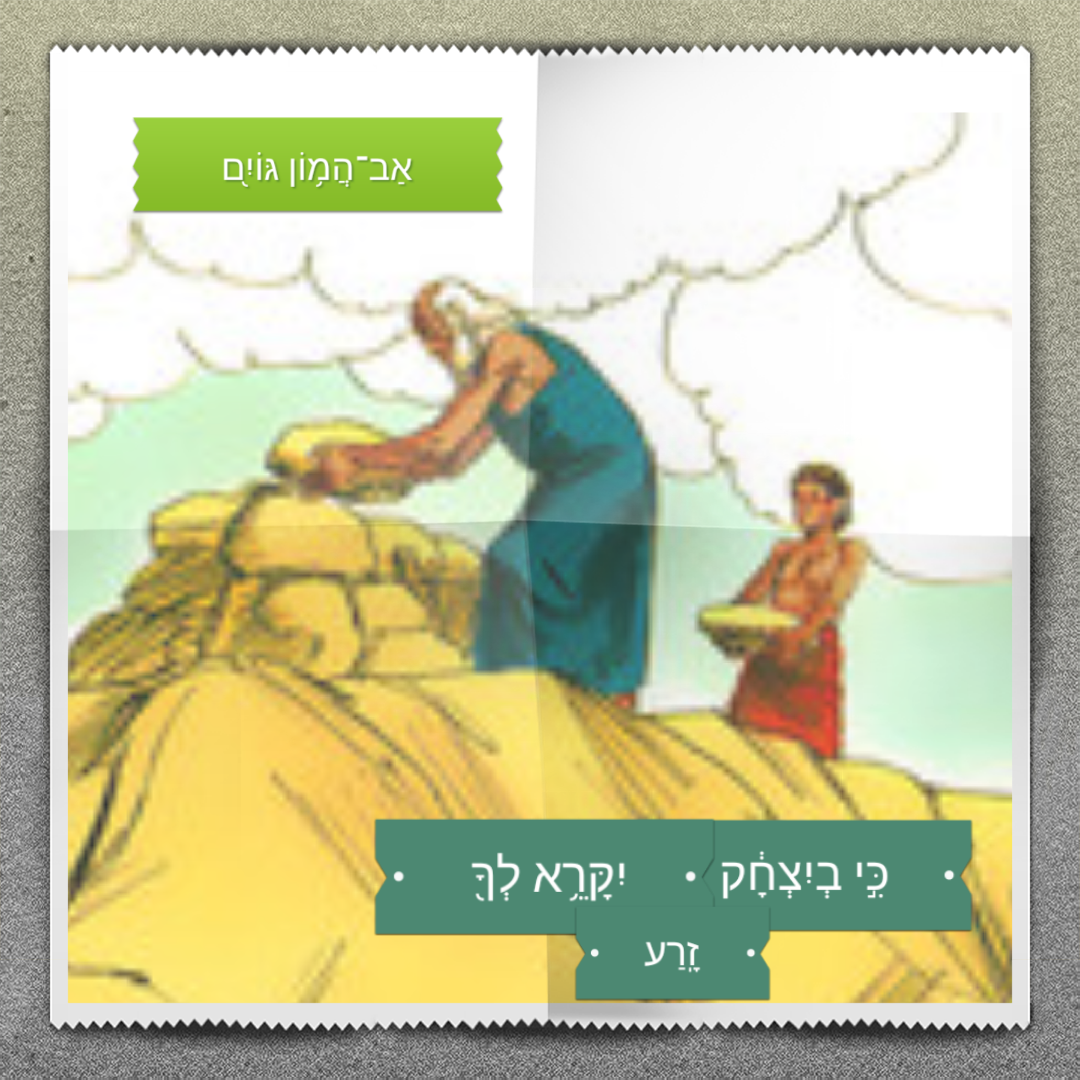 “Deja Va-yeira All Over Again”

Parshas Lech Lecha and Vayeira are the two “Avraham Avinu Parshiyos” in the Torah, as they’re both obviously devoted to the life of Avraham Avinu. The two Avraham Parshiyos are both jam-packed with exciting and monumental stories of our forefather.

But, have you ever wondered why there are two major Sidros devoted Avraham? You might intuitively suggest that it’s because one big Avraham Parshah consisting of both Lech Lecha and Vayeira would just be way too long, and perhaps that would be true. But, considering that this chunk of Avraham’s life is divided into two Sidros, how would one know where to divide them? Presumably, these Sidros represent two major chapters of Avraham’s life, two different titles. And considering that the Torah does not merely teach history, but themes and lessons about our ancestors to serve as instructions for us in our own lives, what is the thematic difference between Lech Lecha and Vayeira.

In terms of where to divvy up these two Sidros, if we look at the actual setup, where Lech Lecha ends and Vayeira begins, it is at the spot of the Bris Milah, Avraham’s covenantal circumcision which he performs for himself and his household. It is here where Hashem changed Avraham’s name, from Avram to Avraham. Thus, when Vayeira begins, it begins with a “new” Avraham. If that’s so, we can simply suggest that there aren’t really two Avraham Parshiyos, but there is one “Avram Parshah” and one “Avraham Parshah.” Cool.

But, the question is what exactly has changed beyond Avraham’s name? Avraham saw a lot of action before his name change, and he sees plenty of more action afterwards. He is still more or less the same man on a Divine mission in this world. How has that mission changed between the Sidros?

We are taught the exhilarating stories of Lech Lecha and Vayeira from a young age and have the opportunity to be fascinated by them annually every year after. But, if we look at them the same way each year, we may not notice some apparent themes shouting at us from the text. Take a slow and critical look at them again. Look at Lech Lecha, our “Parshas Avram.” Done? Okay, good. Now, look at Vayeira, our “Parshas Avraham.” Has it ever occurred to you that Parshas Vayeira seems to be a repeat of Lech Lecha? If you haven’t noticed, pay attention. They have a lot in common.

So, what are we supposed to make of all of these connections? Is Vayeira really just Lech Lecha 2.0? Why is Avraham experiencing this Déjà Vu, confronting a lot of these glaringly familiar situations of his earlier years?

Before we pass off Vayeira as just some coincidental revisiting or reinforcing of Lech Lecha, there are key differences we have to note between the parallel stories in these two Sidros. Looking at the parallels again, we have:

Now, between these stories, one can already notice some obvious differences, for example, as we’ve mentioned, the way the kings treat Avraham after they learn that Sarah was his wife, the manner in which Hagar is driven away from the home, etc. We might also mention the settings in which Hashem promises Avraham progeny are different. In Lech Lecha, Hashem strikes up conversation with Avraham and promises him progeny, whereas in Vayeira opens with Avraham experiencing a vision of Hashem before welcoming in three angels who report the news about his future progeny.

The two differences between Lech Lecha and Vayeira are Avraham and Yitzchak. Now, what in the world do I mean?

So, as we mentioned earlier, one unavoidable difference between the two Sidros is the name-change. For the duration of Lech Lecha until the very end, Avraham was “Avram.” However, throughout Vayeira, he is “Avraham.” Whatever this new identity means, which we’ll have to explain, might reveal the major difference between Lech Lecha and Vayeira.

The other difference is Yitzchak. So, what does that mean? Well, if one looks carefully at the parallel stories we’ve identified, Yitzchak more or less seems to be a key factor of difference.

2. Loved Ones in Danger

This one is less obvious so bear with me.

In both stories, Sarah is abducted by a king. The first king to abduct her is Pharaoh, the second, Avimelech. Chazal tell us that after Pharaoh witnessed the wonders performed on Sarah’s behalf and realized how holy she was, he gave her his daughter Hagar as a maidservant [See Rashi to 16:1 citing Bereishis Rabbah 45:1], thus setting the stage for the birth of Yishmael.

However, the Torah tell us that after Avraham prayed on Avimelech’s behalf that the plague which caused blockage of the wombs of Avimelech’s household, Sarah was remembered and bore Yitzchak. Chazal teach us that she was answered swiftly because anyone who prays for someone in an area which one himself is lacking, Hashem answers the one who prays in the affirmative first [See Rashi to 21:1 citing Bava Kama 92A].

Moreover, we might add that it is not Pharaoh whom Yitzchak will later encounter, but Avimelech (perhaps a descendent). Twice later, Yitzchak will have a run-in with Avimelech, once, when his wife is abducted, and the second time, when Yitzchak has a dispute with the Plishtim over the same wells which Avraham disputed them. Yitzchak would renew Avraham’s covenant with Avimelech at Be’er Sheva [See Bereishis 21 and 26].

In both stories, Lot is at risk and Avraham attempts to rescue him. The first time though, Avraham is coming as his uncle. Until after defeating the four kings, Avraham knew no other heir to his legacy than Lot.

However, in Vayeira, Avraham only rescues him from a remote distance by praying for the city Lot lived in, that they shouldn’t be destroyed. He doesn’t go out to war and he makes no mention of Lot when he prays. He was already told that he would have a child named Yitzchak. He was praying for Lot, not as a kin or heir, but as a fellowman. And even after Lot is saved from the upheaval in Sodom, Avraham maintains and possibly increases his distance from Lot [See Rashi to 20:1 citing Bereishis Rabbah 52:4].

This one is obvious. Hagar and Sarah obviously did not get along. And there are many commentators who explain what the righteous Sarah fundamentally had against Hagar. But, Sarah would not actively send Hagar away just for “no reason” or mere jealousy. Sarah had a son, Yitzchak, whom she understood, could not share an inheritance with the likes of Yishmael. Yitzchak was the difference between these two stories.

Avraham was not only commanded to give himself a Bris Milah, but all of the men in his household. That included Yishmael and even his servants. The Akeidah, however, was a test just between Avraham and Yitzchak.

Well, we’ve argued above, Yitzchak seems to be an apparent key difference between Lech Lecha and Vayeira. And above, we’ve explained how either explicitly or implicitly, Yitzchak marks that difference.

Yitzchak’s name [יצחק] comes from the root “Tz’chok” [צחק] which means “laughter.” He was named after Avraham’s joyous laughter upon the tidings in Lech Lecha that he would have a child [17:17-19]. In Vayeira though, we have these Phantom Yitzchak’s which are occasions of “laughter” which are corrupted, negative versions of laughter which have implications of mocking and cynicism.

When Avraham’s visitor tells him that he is going to have a son, the Torah tells us that Sarah, on her exalted level, laughed in denial, “Vatitzchak [ותצחק] Sarah B’Kirbah”-“And Sarah laughed to herself” [18:12].

When Lot attempts to recruit his sons-in-law to flee the impending doom in Sodom, the Torah tells us that he is “Ch’Mitzacheik [כמצחק]”-“like a jester/mocker” in their eyes [19:14].

When describing the negative behavior that Sarah observed in Yishmael’s conduct, it describes him too as “Mitzacheik”-“mocking/sporting” [21:9].

Indeed, none of these are references to Yitzchak himself. Particularly Lot and Yishmael were the prospective heirs to Avraham’s legacy, but indeed, they were not the true “Yitzchak.” Lot and Yishmael would fade into the background to make way for the real thing.

The question is what to do with all of this information. Avraham revisits old experiences, but they are modified by his new status as “Avraham” and the anticipation of “Yitzchak.” But, what does this all mean? How are we to relate to this difference between Lech Lecha and Vayeira in light of the differences we’ve identified in Avraham and Yitzchak?

When we consider the meaning of the name “Avraham” and then look at Avraham’s experiences in Vayeira which apparently revolve around Yitzchak, we arrive at an obvious tension.

On the one hand, Hashem already told Avraham that the name “Avraham” means that Avraham would be an “Av HaMon Goyim”-“a father of a multitude of nations” [17:3], a father to many. It means that Avraham has to be concerned for people in the world around him. It is with this identity in mind, R’ Shimshon Raphael Hirsch explains, that Hashem tells Avraham about the fate of Sodom. And of course, Avraham cares about Lot, and certainly, his own son Yishmael. He hopes and prays for their welfare, as he should.

And yet, Hashem emphasizes that “Ki B’Yitzchak Yikarei Lecha Zara”-“For in Yitzchak, will it be considered for you, offspring” [21:12], that as important as his role as a father of multitudes is, his main priority has to be the true “Zera Avraham,” the essential progeny of Avraham, and that is Yitzchak Avinu. That means that Avraham cannot hang onto Lot. It means that of Yishmael and Yitzchak are at odds with one another, Avraham has to place Yitzchak first. That is because, indeed, Yitzchak is the one with whom Hashem has told Avraham at his Bris Milah that He would establish His covenant [17:19]. That is the message of the Vayeira versus Lech Lecha!

The culmination of this message is at the Akeidah when Hashem begins to simulate the end of the Abrahamic mission. It is at that fateful moment when Hashem stops Avraham at the last moment that He makes it unequivocally clear that Yitzchak is the one who will carry on Avraham’s mission and legacy.

In a sense, we can see this same dichotomy in Hashem’s relationship with us and the rest of the world. On the one hand, Hashem is the Father of all of Creation. Yet, Hashem declares, “B’ni Bechori Yisrael”-“My firstborn son, Yisrael” [Shemos 4:22], that we are His priority and focus.

And this same dichotomy should exist within all of us. On the one hand, we are an “Or LaGoyim”-“light unto the nations” [Yishaiyah 49:6], which means that we have a responsibility to the nations of the world around us. Yes, like Avraham Avinu, we have to be concerned for all of Hashem’s creations. And yet, we are Am Yisrael, which means that our Chessed (kindness) must begin at home. Like Avraham Avinu, nothing can come at odds with the priority and focus of our true family.

But, if we have our priorities straight and delicately balance out our responsibilities, appropriating our energies, not equally, but according to the extent of our obligations towards each one of them, we will successfully model Avraham Avinu, the Av HaMon Goyim and the forbearer of Zera Avraham and Klal Yisrael.

May we all be Zocheh to set our priorities straight and balance our responsibilities accordingly, doing Chessed in the world with a concentration on our Chessed at home, and Hashem should make us successful and do the same for us, actualizing His Bris with Avraham through us in the times of Moshiach, Bimheirah Biyomeinu! Have a Great Shabbos!
-Yehoshua Shmuel Eisenberg 🙂