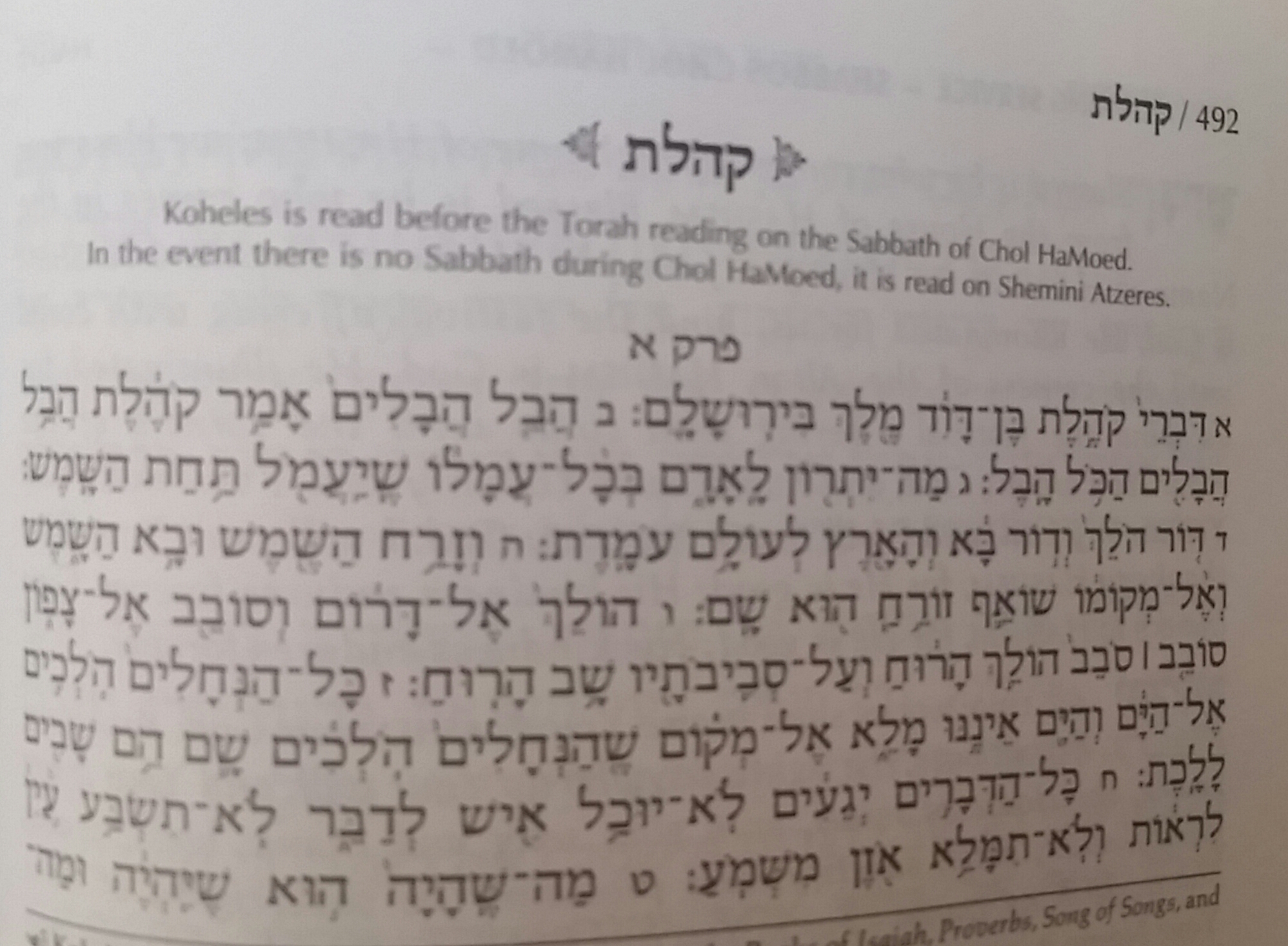 ● Is Koheles just foil the Simchah of Succos, or is it something more? ●

One of the featured readings for the liturgy of the Chag of Succos is Megillas Koheles, a scroll of some of the intense teachings and truisms of Shlomo HaMelech. The simple question is: Why?

Just about every major Jewish holiday has a specific reading which contains themes of the day such as Yom Kippur on which we read Sefer Yonah. Many of these readings feature the Megillos from Kesuvim, such as Megillas Esther on Purim, or Megillas Rus on Shavuos. For each one, the question as to why the given reading was chosen is not only fair, but essential for one’s understanding of not only the theme and mood of the book itself, but that of the Mo’eid, or designated time, on which it is read.

With that said, one has to wonder about the choice of Koheles as the reading Succos, considering the seemingly clashing themes and moods between Succos and Koheles.

Koheles: The Voice of Vanity

A simple look through Koheles will reveal its obvious theme of the futility and vanity of the material world; “Haveil Havalim Amar Koheles Haveil Havalim HaKol Havel. Mah Yisron LaAdam B’Chal Amalo SheYa’amol Tachas HaShamesh”-“Vanity of vanities, said Koheles, vanity of vanities, all is vanity. What gain is there for man in all his toil that he toils under the sun?”1

Throughout the book, Shlomo HaMelech searches for meaning and substance of the terrestrial realm to no avail. He concludes that it is all vanity. For this reason, the mood of Koheles is solemn, seemingly downbeat, and some might even say depressing.

The obvious difficulty with this choice of reading on Succos is that the season of Succos is known, more than any other holiday, as “Z’man Simchaseinu”-“the time of our happiness.”2 It is the day regarding which the Torah itself commands, “V’Samachta B’Chagecha… …V’Hayisa Ach Samei’ach”-“And you shall rejoice on your holiday… …and you should only be happy.”3

Indeed, to read Koheles on Succos would seem to be paradoxical. How does Koheles contain or evoke the theme and mood of Succos? On the contrary, it seems to completely counteract it. In fact, it is for this reason that many suggest that the reading of Koheles was designed to tone down man’s lightheadedness amidst the merriment of Succos. In other words, it was specifically selected as a foil of sorts to Succos, to keep man’s rejoicing in check. Even when the Torah permits and encourages rejoicing, it should be controlled.

Whatever truth and legitimacy there may be to this approach, this “solution” forces one to admit and concede to the reality that the mood of Koheles is in combat the mood of Succos. The question is if Koheles really is just a foil to the Succos celebration. If it isn’t, then what else could it possibly be? Perhaps there is something deeper and more fundamental to the relationship between Koheles and Succos.

If one thinks about it, although Succos is a highly festive holiday, it comes off the heels of the Yomim Nora’im, the Days of Awe, or the Yimei HaDin, Days of Judgment, where the awe of the King is still present and ought to be felt by many. Considering the weight of these days, it would not seem to be a time for overblown celebration. Moreover, if one looks at Succos, the nature of the festivity does not even seem to be an overblown celebration. The holiday itself is the opposite to the lap of luxury. In fact, from a material standpoint, the day is limiting as the main commandment of the day requires one to leave his materially comfortable home and live in a temporary hut.

Indeed, quite like the direction of Koheles, interwoven into the laws of Succos is the very philosophy that the material world is intrinsically futile and therefore not essential. As Shlomo HaMelech dismissed everything—all pleasures and joys, as ultimately meaningless, Succos reminds us what truly matters. It is as Koheles concludes—that all that really matters at the end of the day is Avodas Hashem, service of Hashem; “Sof Davar HaKol Nishma Es HaElokim Yira V’es Mitzvosav Shmor Ki Zeh Kol HaAdam”- “The end of the matter, all having been heard, G-d he shall fear and His commandments he shall guard for this is all of man [man’s essence].”4 It would seem that this mindset is where Succos and Koheles meet.

But the question remains as to what to make Succos the true season to be jolly. Considering everything we have said, why is Succos the“Z’man Simchaseinu”? Because if Succos is perfectly aligned with Koheles, as we have just suggested, emphasizing the reality that the aesthetics of the world consist mainly of vanity and lack true meaning, would that not immediately hamper the “rejoicing” of Succos? What then is the real identity of Succos? Or what is the nature of Simchah of Succos?

What is the basis for Simchah on Succos? As we’ve already mentioned, physical comfort is decreased on Succos quite tangibly. It seems that material joy is a minor component. That means that the Simchah of Succos is necessarily something else, and perhaps that is what Koheles is telling us indirectly.

The argument of Koheles is that the “happiness,” according to the common worldview, is meaningless and futile. Indeed, Succos all around attests to this reality. The material world alone is not worth living for. Now, as sad as that might sound to some people, as far as Koheles and Succos are concerned, it is really not a depressing reality, but it is just the reality. When a person leaves the world, the fact that his beautiful couch, delicacies, clothes, and physical life have ended, to him, in his death, is not an inconvenient truth, but it is just the truth. Those things never were a source of true, lasting joy. Although they provided some sense of surface happiness, it was fleeting and makeshift from the beginning. Where then does true Simchah come from? How does Koheles inform the concept of Simchah?

Koheles, as does Succos, reminds us what actually matters—where meaning comes from, where justifiable happiness can come from. Once meaning in life is found, real Simchah can be met. Once that reality is realized, Simchah can be justified. True Simchah does not come from the luxuries of the world. As cliché as it sounds, true, lasting Simchah comes “from within.” It comes from the true understanding of one’s purpose. Koheles doesn’t leave out that purpose;  “Sof Davar HaKol Nishma Es HaElokim Yira V’es Mitzvosav Shmor Ki Zeh Kol HaAdam”- “The end of the matter, all having been heard, G-d he shall fear and His commandments he shall guard for this is all of man [man’s essence].”4 This way of life clarifies and justifies our happiness.

The End of the Matter

At the end of the day, our relationship with Hashem is all we have. As is recorded in Tehillim is the song of “L’Dovid Hashem Ori,” “Ki Avi V’Imi Azavuni VaHashem Ya’asfeini”-“though my father and mother have left me, Hashem will gather me in”5—in other words, even when everything we love in this physical world is gone, there is still “Sof Davar,” a bottom line, that does not change. The only thing that lasts forever is one’s relationship with Hashem. One’s devotion and toil for this eternally authentic and existent reality is the basis for happiness.

Koheles provides the reality check to get us to that point. Koheles gets us to ask ourselves what we really have in life that’s worth living for, what truly matters, and if we’re actually happy. Once again, “The end of the matter, all having been heard, G-d he shall fear and His commandments he shall guard for this is all of man [man’s essence].” Once we’ve meditated on the reality for a bit, we can get there. We can achieve true happiness.

May we all be Zocheh to realize what truly matters in life, invest in a life of true meaning, serving Hashem to the best of our abilities, and we should achieve the truest happiness in life in the form of the Geulah and the coming of Moshiach, Bimheirah Biyomeinu! Have a Great Shabbos Chol HaMo’eid!