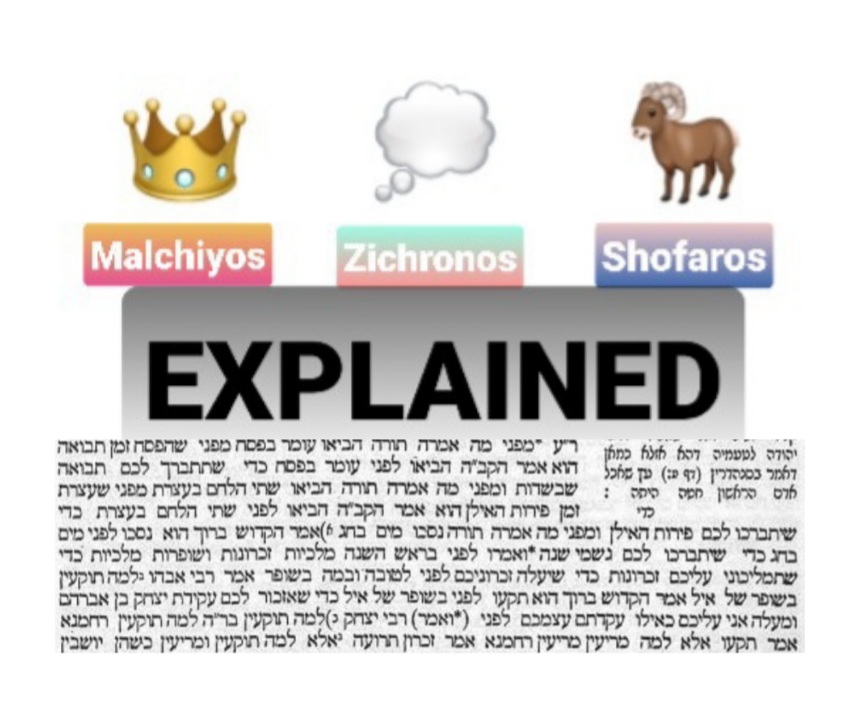 Chazal teach us that there are three unique benedictions imbedded in the Musaf service of Rosh HaShannah which contain verses that are respectively referred to as Malchiyos (those of kingship), Zichronos (those of remembrance), and Shofaros (those of the Shofar).1 In this triad lies the undoubted themes of the day. The question is what exactly these themes mean.

The Means & the Ends

In order to uncover their meaning, let us return to the precise statements of Chazal. The Gemara in Rosh HaShannah explains that Hashem, as it were, instructs us, to recite “Malchiyos,” “Zichronos” and “Shofaros” and explains their purpose2:

And “with what?” asks the Gemara. In other words, through what medium do we accept G-d’s sovereignty and invoke our best reflection before Hashem?

From this tradition, it seems that “Shofaros” represents the means to the two goals of “Malchiyos” and “Zichronos.” But, how does the Shofar serve that purpose? How are we to understand the relationship between these themes?

Earlier in the same Gemara, Chazal describe various seasonal rituals which we perform to achieve divine favor in various areas of life. We offer an Omer offering of barley on Pesach when we’re judged concerning produce of the field, the Shtei HaLechem (Two Loaves) of wheat on Shavuos when we’re judged for fruit of the tree, the Nisuch HaMayim (Water Libation) on Succos when we’re judged for rain, and finally, the sounds of the Shofar on Rosh HaShannah when mankind is judged for life itself.

The tribute of the Shofar is unique as it features an intangible “Cheftzah Shel Avodah” or vessel of worship. But, what are we offering G-d when we produce those sounds? What is the Avodah of the day? What is the nature of the favor we seek through that Avodah? Apparently, the Avodah is to accept G-d’s “Kingship” (Malchiyos) and the favor we seek is our “good memory” (Zichronos). This Avodah and favor are generated by “Shofar offering.” What is evident though is that Rosh HaShannah’s equivalent of the Omer,  Shtei HaLechem and Nisuch HaMayim—namely, the sounds of the Shofar—are the “object” offered in the Avodah of Malchiyos and Zichronos. The next question is how exactly the sounds of the Shofar generates “Malchiyos” and “Zichronos.” What about the Shofar speaks to these two themes?

Before we can understand the messages of the Shofar, perhaps we need to examine the relationship between these essential themes of “Malchiyos” and “Zichronos.” Do they have anything to do with one another? And why exactly do we require both?

Once again, Malchiyos refers to our acceptance and acknowledgment of G-d’s sovereignty. This concept is simple enough to understand. But, Zichronos, as we have so far described it, is a little bit more complex.

We had established that it refers to the positive memory or reflection that we hope G-d will have of us. What exactly does that mean? G-d has seen and constantly recalls everything about us, whether our best moments and qualities or our most unflattering moments and qualities. How can the latter possibly be ignored by an All-Remembering G-d? Moreover, if G-d is All-Remembering, what makes Rosh HaShannah especially designated as the “Yom HaZikaron” or the “Day of Remembrance” or “Recollection”?

Indeed, in the paragraph of Zichronos, we don’t try to deny the endless capacity of G-d’s memory bank. We acknowledge that He is “Zocher Kal HaNishkachos”-“remembering of all that is otherwise forgotten.” Without this recognition, there is no Rosh HaShannah. The awe of the day of G-d’s “coronation” as well as the “Day of Judgment” relies on the understanding that our every action, word, and thought is evaluated. In simpler terms, Malchiyos relies on G-d’s ability of Zichronos, because if G-d should merely be a removed and forgetful king, than why should anyone fear Him? Thus, He is the most powerful King, and yet, He remembers everything. What can possibly be more frightening? How could we possibly stand before Him on the Day of Judgment?

And here is where the Shofar and Rosh HaShannah become most significant. Though Hashem remembers everything constantly and judges the world constantly, there is a day where He grants us “specialized attention.” It is for the same reason that even though G-d is King of the universe every day, it is on this special day that we are most careful to acknowledge it and announce it. That is where the Shofar’s first goal is realized. By sounding the Shofar, we usher in the King and Judge. We awaken ourselves to rise in reverence and awe of His majesty.

And yet, on this same day, where the “All-Remembering” G-d has granted us a day of specialized recollection, the same Shofar through which we coronate Him produces the sound of a cry for divine favor. It is the sound that appeals to G-d’s “selective memory,” which “invokes” and “evokes” the memories of our greatest merits in the face of all of our guilt and condemnation.

Thus, the Shofar both announces the arrival of the King, i.e. “Malchiyos,” but also appeals to His “selective memory,” i.e. “Zichronos.”

But, if all of the above is true, the section of “Shofaros” should strike us as somewhat awkward. So far, we highlighted the tradition that the Shofar is apparently the tool and mechanism to generate Malchiyos—our coronation of Hashem, and Zichronos—the evocation of our favorable memory before Hashem. If we take this tradition at face value, Malchiyos and Zichronos are the two real themes of the day. The Shofar is only a means to those two ends.

In light of the above, we can understand why our Tefilah should include sections in which we recite verses thematic of Malchiyos and Zichronos. But isn’t it odd to have an entire parallel section of verses describing the Shofar? Imagine the coronation of a human king or a presidential inauguration in which one of the featured speakers delivers an elaborate speech describing the instruments in the orchestra. It would be plainly bizarre. Yes, the musical accompaniment is present and, granted, the instruments are essential to inspire a certain mood and evoke certain thoughts. We certainly could not envision the celebration without the sounds of the trumpets. The guests may marvel at the musical performance amongst themselves. But, why would any of the speakers at such a program spend any significant time giving specialized attention to the background sounds?

To offer an additional Mashal (analogy) to illustrate the seeming oddity of the section of Shofaros, could one possibly envision the inclusion of a section in the Tefilah which describes the Machzor, the prayer book in our hands? The Machzor, seemingly like the Shofar, is a tool and mechanism of our prayers. It contains the sacred text with which we will beseech Hashem. We could not imagine Yomim Nora’im without a Machzor, but it would be ludicrous to incorporate a section into the prayers discussing the prayer book. Why then is the Shofar any different? Why does our tradition include this section of verses of Shofaros?

The answer must be that the Shofar could not be a mere tool. It certainly serves such functions, but it is so much more. Indeed, the Torah refers Rosh HaShannah as a “Yom Terua’h,”3 literally a “day of blasts.” That means that the sound of Shofar doesn’t not provide “background noise,” but it permeates and defines the entire day—it is the essence of the day.

This is evident from that which we pointed out earlier, that Chazal compare the Shofar sounds on Rosh HaShannah to the Korban Omer, Shtei HaLechem, and Nisuch HaMayim that are offered respectively on Pesach, Shavuos, and Succos.2 In other words, the Teruos of the Shofar are not merely a mechanism of our service, but they are the object of our connection to G-d, the offering itself.

The Machzor vs. the Shofar

This comparison between the Shofar and the Machzor is actually debunked by a Halachah stated plainly in the Gemara, that if one has a choice between two cities, one that will only be blowing Shofar and one that will only be reciting all of the benedictions of the day—that even if one is only in doubt as to whether or not there is a Shofar in town—he must travel towards the city with the Shofar.4

Put somewhat differently, if one city has only a Shofar and the other has only a Machzor—or if one city has only a Ba’al Tekiyah (Shofar blower) while the other has only a Chazzan (cantor) or Ba’al Tefilah—one must see to it that he is in a place where he will hear the Shofar. Neither the sacred text of the blessings nor the most beautiful voice reciting them is nearly as important as the Shofar is on Rosh HaShannah. That is because the Shofar is not a mere aid, but it is the Biblical definition of the day.

The Wordless Voice of Tefilah

In this vein, with support from several sources, R’ Yosef Ber Soloveitchik differentiated between two elements of the Shofar, one characterized by the basic description of Rosh HaShannah as a “Yom Teruah”3 and characterized by the Torah’s other description of  Rosh HaShannah as a “Yom Zichron Teruah”-“A day of reflection of the blasts.”5, 6 Explains R’ Soloveitchik, although there is obviously a proactive, Biblical commandment to blow the Shofar, hence “Yom Teruah,” its essential fulfillment actually takes place in the heart of its listeners, represented by “Zichron Teruah” which highlights the attention and intention that the Shofar requires. Indeed, although most Mitzvos don’t necessarily demand our intent, the hearing of Shofar does, for like Tefilah which is characterized as Avodah SheB’Leiv (service of the heart) and therefore defined by intention of the heart, so is the Shofar.

Indeed, for all of these reasons, the Shofar’s role in our Rosh HaShannah service absolutely needs to be qualified and accentuated, perhaps no differently than verses in our Tefilah which describe Korbanos. The Shofar’s role as an essential and not an extra cannot be missed. It represents the wordless voice, intention, and soul of our Tefilah beyond what any words in the Machzor can possibly communicate. The Shofar is essential on Rosh HaShannah because, as Rosh HaShannah is the Day of Judgment, it is therefore the day on which we are most desperate to forge a heartfelt connection to Hashem and achieve much needed mercy. It is with that in mind that we offer Hashem the only thing we can when words cannot possibly communicate the need for that connection; our “voice” and our hearts. It is with these intentions that at the conclusion of Shofaros, we bless Hashem as “Shomei’a Kol Teruas Amo Yisrael B’Rachamim”-“The One Who hears the voice of the blasts of His nation Yisrael with mercy.”

May we all be Zocheh to properly crown Hashem, evoke our greatest memories before Him, and intimately connect to Him with the voice of the Shofar, and we should merit hearing the Shofar announcing our Geulah when G-d will finally be recognized as King over all with the coming of Moshiach, Bimheirah BiYomeinu! Have a Great Shabbos, Rosh HaShannah, and a K’sivah V’Chasimah Tovah!