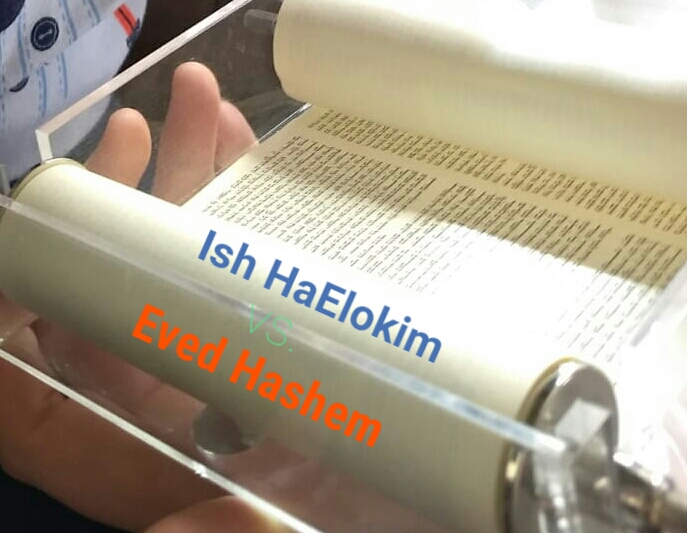 ● Is there a difference between Moshe’s two great titles? ●

Just before Moshe Rabbeinu could deliver his parting words of his blessing to the B’nei Yisrael, the Torah referred to him as an “Ish HaElokim”-“the man of G-d.”1 Though this esteemed title is certainly an upgrade from his earliest one, the lowly label of “Ish Mitzri”-“Egyptian man,”2 Moshe was not finished earning appellations as our Sidrah would tag Moshe once more calling him an “Eved Hashem”-“servant of Hashem,” at his death.3

What could have possibly changed on Moshe’s dying day, between the beginning of the Sidrah and the end of the Sidrah, that Moshe earned these two distinct titles, “Ish HaElokim,” and then, “Eved Hashem”? What is the fundamental difference between these labels? Is there a significant difference between them? Perhaps we’re just splitting hairs here; both “Ish HaElokim” and “Eved Hashem” are lofty titles for a righteous, G-d fearing individual. But, if the terms are synonymous, one would have to wonder why the Torah went out of its way to use these two titles at these two respective moments. Why, in his final hours, was Moshe labeled an “Ish HaElokim” and, then, upon his death, an “Eved Hashem”?

When looking at the titles, each one features a subject or noun and a Name of G-d which modifies it. On the one hand, we have “Ish HaElokim” and, on the other, “Eved Hashem.”4

The word “Ish” literally means “man.” However, there are many words even in Biblical Hebrew which literally translate to “man.” The question is what makes “Ish” unique. The term “Ish” particularly does not merely describe a human male, but a developed, human personality. For example, Noach was an “Ish Tzaddik,” a righteous man, literally, a man of righteousness.5 He was someone who could be defined by his traits and personality of righteousness.

“Elokim” is G-d’s Name of Judgment and it is the Name which is used to describe G-d’s order over the natural world.

Thus, together, “Ish HaElokim”-“man of G-d” is someone whose personality is molded by the will of G-d as the Almighty in this world. It is G-d’s role as the Governor in this person’s life which ultimately modifies this person’s personality. This may explain why we find that a handful of Nevi’im or prophets throughout Tanach were graced with a similar title, “Ish Elokim,” (without the modyfing “Heih” [ה]). It is because G-d is Elokim or the Judge over the natural world that these holy individuals not only obeyed Him by all means, but their entire lives in this world revolved around their relationship with G-d. They are “men of G-d.”

Moving onto the second title, the noun “Eved” is a word which always refers to a servant or slave. This meaning is already different from the independent personality reflected by “Ish,” as an “Eved” is completely bound and defined by his service towards his master. An “Eved” is a dependent being.

The Name of G-d which we pronounce as “Hashem” is G-d’s Name of Mercy and refers to G-d’s sense of eternality, that He spans all realms of time. In fact, the Name of Hashem, as it is spelled, contains the three words, “Hayah,” “Hoveh,” and “Yihiyeh” which reflect past, present and future. This Name of G-d does not demand human obedience to G-d due to G-d’s governance over the natural world, but due to G-d’s eternality and Presence in all realms. This Name of Hashem dictates the simple reality that Hashem and His will are the only purposeful pursuits and destinations in life.

Thus, together, an “Eved Hashem”-“Servant of Hashem” is someone who, in his essence, embodies the will of Hashem as Hashem’s will is the only one source of true meaning. When one has completely reconnected with his spiritual roots and fully recognized himself and the world around him as nothing more than portions of G-d’s Essence itself, then he can appropriately be identified as a “servant of Hashem.” The “Eved Hashem” lives life as though all of existence exists for no other purpose than to perform Hashem’s will and thereby attach itself to G-d’s eternality. He is no longer an indepedent “man,” described by His elevated inclination towards G-d, but he is a “servant,” inseparable from Hashem. He is defined by his intrinsic role as a server of the All-Encompassing Hashem. His life does not merely revolve around his relationship with Hashem and the bond he shares with Hashem, but his entire existence is totally dependent on Hashem.

The next question is what the threshold between these two stages could possibly be. Our model for these two titles is none other than the greatest human being who ever lived, Moshe Rabbeinu. And yet, even Moshe spent an entire lifetime excelling in his spiritual growth before the Torah called him “Ish HaElokim.” What could have possibly changed in the short hours between the beginning of Parshas V’Zos HaBrachah and the end in which time Moshe earned the second, higher title of “Eved Hashem”?

If one looks closely, the text of our Sidrah itself seems to draw a line in the sand which hints at this threshold. The Sidrah begins, “V’Zos HaBrachah Asheir Beirach Moshe Ish HaElokim Es B’nei Yisrael Lifnei Moso”-“And this is the blessing that Moshe, the man of G-d blessed the B’nei Yisrael before his death.”6

And yet, towards the end of the Sidrah, the Chumash tells us, “Vayamas Sham Moshe Eved Hashem…”-“And there died Moshe, servant of Hashem…”7

The apparent dividing line between “Ish HaElokim” and “Eved Hashem,” as stressed by both of these verses, is undoubtedly Moshe’s death.8 In fact, Rabbeinu Bachya actually states explicitly that the new title symbolizes how Moshe achieved a higher status at his death, depicting him as a servant who was only now permitted to enter the King’s inner chamber.

The question is why or how exactly it is that Moshe’s death served as the dividing line between these two ranks? What exactly does it mean that Moshe, though a “Man of G-d” in his lifetime, would only become a “Servant of G-d” upon his death?

Perhaps the threshold between Moshe Rabbeinu’s two titles suggests that it is not until the day that “you are done” that one has reached his spiritual destination, having finally reconnected with G-d’s essence. Until one dies and leaves this world wholly in the service of Hashem, he lives life, for better or for worse, “independently” of G-d. Although, all people, in their roots, are connected to and fully dependent on G-d, Hashem put man in the physical world in a physical body, situating him where he does not readily recognize those roots. In the natural world, man can live as an independent “Ish” with the choice to develop into an “Ish HaElokim” should he choose to make G-d the governing factor in his life. He can also opt to develop into an “Ish” of whatever other personality by which he wants to be defined. Regardless, he will be limited to and defined as an “Ish,” a “man” with human tendencies.

In one’s lifetime on this world, “Ish HaElokim” is perhaps the greatest title achievable—indeed, in one’s lifetime. Becoming an “Eved” and more specifically, an “Eved Hashem,” is the ultimate goal. True, in one’s lifetime, one can only strive and yearn to mold his character through a life spent and defined by his unwavering service to Hashem. His entire life can revolve around his relationship with Hashem. The road to becoming a true Eved Hashem, however, is marked by the end, by one’s complete reconnection to his spiritual roots.

Here, we learn that although Moshe spent his life growing into an Ish HaElokim, it was the fact that he lived out his life as an Ish HaElokim until his very last moments that he earned the seal of Eved Hashem. Neither of these achievements are reserved for Moshe Rabbeinu alone. The challenge for us is to strive to not only make the right choices and properly mold our tendencies towards the will of G-d and become “people of” or “representatives of Hashem,” but to become inseparable components of our Creator, pure Ovdei Hashem.

May we all be Zocheh live G-d centric lives, strive towards and reach our roots so as to not only become people of G-d, but servants of Hashem, and He should be a true Master over the entire world with the coming of the Geulah and Moshiach, Bimheirah Biyomeinu! Chazak! Chazak! V’Nis’chazeik! Have a Great Yom Tov/Chag Samei’ach/Sh’mini Atzeres/Simchas Torah!