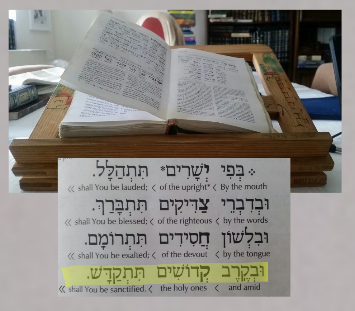 In the past, we’ve explored the relationship between the “double-Parshiyos” of Acharei Mos and Kedoshim, and today, I want to rehash our observations and further the conversation as it pertains to us today.

For most of the other “double-Parshiyos,” the unifying theme is easier to identify. Vayak’heil and Pekudei, for example, clearly highlight the Mishkan project, and Tazria and Metzora both highlight the laws of spiritual impurity with a concentration on the disease known as Tzara’as.

All the while, as each half of the “double-Parshiyos” is really its own individual Sidrah, we have to then consider what unique contribution each of the two Sidros brings to the overall theme of the “double-Parsha.” So, if Vayak’heil, for example, is about the Mishkan’s building process, Pekudei is about completion of and reflection on that process. And similarly, if Tazria is about diagnosing the spiritual impurity, Metzora is about treating the spiritual impurity.

With that said, what exactly is the common theme of Acharei Mos and Kedoshim? And whatever that theme is, what does each of these two Sidros bring to the table? What apparent theme is introduced in Acharei Mos that Kedoshim builds upon?

In that much longer conversation, we argued that both Acharei Mos and Kedoshim share much overlap in terms of their law topics1, but overall, each focuses on the sensitivity of Kedushah. However, the Kedushah of each Sidrah is manifest and emphasized much differently.

The theme of Acharei Mos is Kedushas HaMakom, holiness in space. This backdrop would explain many details and topics in the Sidrah, but we will just throw out a few here.

On the other hand, Parshas Kedoshim focuses on the Kedushah of the people, thus “Kedoshim Tihiyu”-“You shall be holy.”2 In other words, not only are we supposed to be sensitive to the holiness that may exist in a given environment, like a Shul or a Mikdash, but there has to be a spill-over effect; we are commanded to transcend and become vessels of holiness ourselves, like the Essence of Hashem Himself, “Ki Kadosh Ani”-“For I am holy.”2

Perhaps this charge implies that if the Holy Land is sensitive to abominable acts, then we, as holy people, should also be sensitive to such acts. That would explain why, although the prohibitions of the Arayos (illicit relationships) were laid out in Acharei Mos, the penalties for the Arayos which must be carried out by Hashem’s people, are withheld until Kedoshim where we are commanded to be holy and therefore sensitive to those issues.

Exiled from our “Holy Place”

The difference between Acharei Mos and Kedoshim is crucial today because we have been exiled from all of our “holy places.” Granted, for generations, our nation has lacked a Beis HaMikdash. Moreover, most of the B’nei Yisrael in exile struggle to access and seize the Kedushas Eretz Yisrael. Accordingly, we have scrambled to create new “holy spaces.” But now, without even a Shul, a Beis Midrash, or even a Minyan, we’re desperate to somehow generate some holiness at least within our homes. And this may help, as the Gemara itself states that in the absence of a Beis HaMikdash, Hashem dwells in the “four Amos of Halachah,”3 i.e. wherever His will is being performed.

However, perhaps there is another vital charge which we absolutely need today.

“Kedoshim Tihiyu” requires us to become vessels of holiness. In the same vein, the Alshich and many others explained that the deeper meaning of “V’Asu Li Mikdash V’Shachanti Besocham”-“And they shall make for Me a Temple and I will dwell among them” is that Hashem will dwell “within them,” the people themselves. In other words, we are to make ourselves into the Mikdash within which Hashem might dwell. This was also exactly what was intended when the Sefer HaChareidim declared the now famous words of “Bilvavi Mishkan Evneh”-“In my heart I shall build a Tabernacle.”

One final and most crucial source for this imperative appears in our weekly Shabbos prayers. Shacharis is introduced with the paragraph of “Shochein Ad Marom V’Kadosh Sh’mo”-“He Who dwells on high and Holy is His Name [Essence].” In this passage, we list different sectors of lofty people who praise Him. For simplicity, we will just cite the Ashkenazic version (with Artscroll’s standard translation) which reads as follows:

R’ Shraga Feivel Mendlowitz, as cited by the Artscroll Siddur, noted that the four groups are listed in ascending order; however, not only is each group “holier” than the previous one, but the expression of praise for G-d that emerges from each group does so from a deeper place within each holier group (my description of this order will vary slightly from Artscroll’s). For example, while it is the exterior “mouth” through which the “Yesharim” or “straight ones” laud Hashem, it is the “words” produced from the inside of the Tzaddikim that emerge from within their mouths to bless Hashem. And yet, for the even holier Chassidim, it is the “tongue,” behind the “words,” which itself spouts praise and exalts Hashem.

For the purposes of our Sidrah and discussion, we shall focus on the holiest group, the Kedoshim. What exactly is the “Kerev Kedoshim”? The basic translation we’ve provided reads: “amid the holy ones.” But, that does not mean that Hashem is merely praised in their presence or company as might be understood from the English words “in their midst.” Obviously, that read would not be consistent with progression as the general “company” of the holy ones is exterior. In truth, the connotations of “B’Kerev” are that of the innards and inside of the person, for example, as Sarah Imeinu laughed “B’Kirbah,”4 to herself.

What that means then is that, deeper than the mouth, the spoken word, or the hidden tongue, it is the inner essence of the “Kedoshim” themselves through which Hashem is sanctified in this world. The Kedoshim in this world are living, breathing vessels of Hashem’s Presence. Hashem’s holiness wholly is inside them.

Even in the absence of a Beis HaMikdash, Shul, or even a Minyan, there are many ways to create holy spaces in our environment. For example, Chazal suggest praying in a set place5, a location where we learn Torah3, next to a wall6, where there are windows7, facing the direction of the Holy of Holies.8 However, there is potentially a “space” for the Divine Presence that is so much “closer to home”—in fact, it is closer than home. It is within us—that is if we turn ourselves to vessels, chariots for the Shechinah.

Perhaps, in this vein, Hashem declared, “B’Krovai Ekadeish,”9 which Chazal understood to mean, “through those who are close to Me, I will be sanctified.”10 Who are “those who are close”? Each of the Kedoshim in whose “Kerev”—inner essence—is a manifestation and expression of Hashem’s Kedushah.

One need not be a Kohein Gadol in the Kodesh HaKadashim to be “Kadosh LaHashem.” And though we would prefer a Minyan in Shul, and even more, a place close to the Avodah in the Beis HaMikdash, this ultimate intimacy with Hashem can take place within all of us. We should return from our exile as soon as possible, but in the meantime, let us put in the effort to transform ourselves into Kedoshim and sanctify Hashem most intimately through our essence.

May we all be Zocheh to both that Kedushah from within and our return from exile to the Makom HaKadosh with the coming of Moshiach, Bimheirah Biyomeinu! Have a Great Shabbos! Don’t forget to count Sefiras HaOmer (#23).
-Yehoshua Shmuel Eisenberg 🙂