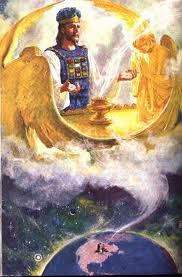 This D’var Torah is in Z’chus L’Ilui Nishmas my sister Kayla Rus Bas Bunim Tuvia A”H, my grandfather Dovid Tzvi Ben Yosef Yochanan A”H, & my great aunt Rivkah Sorah Bas Zev Yehuda HaKohein in Z’chus L’Refuah Shileimah for:
-My father Bunim Tuvia Ben Channa Freidel
-My grandmothers Channah Freidel Bas Sarah, and Shulamis Bas Etta
-Miriam Liba Bas Devora
-Aharon Ben Fruma -And all of the Cholei Yisrael
-It should also be a Z’chus for an Aliyah of the holy Neshamah of Dovid Avraham Ben Chiya Kehas—R’ Dovid Winiarz ZT”L as well as the Neshamos of those whose lives were taken in terror attacks (Hashem Yikom Damam), and a Z’chus for success for Tzaha”l as well as the rest of Am Yisrael, in Eretz Yisrael and in the Galus.

Both Acharei Mos and Kedoshim, like every given Sidrah in the Torah, have their own unique sets of laws and lessons. However, as it happens with a few other Parshiyos, there are certain years when these two Sidros must share the limelight with one another, as they’re both read on a given Shabbos. Once we encounter these Sidros as a double-Parshah, we have to consider the common theme that connects them and justifies their pairing.

Finding the theme is easier in some pairs than in others; for example, Vayak’heil and Pekudei clearly highlight the Mishkan project, and Tazria and Metzora both highlight the laws of spiritual impurity with a concentration on the disease known as Tzara’as.

All the while, as each half of the double-Parshiyos is really its own individual Sidrah, we have to then consider what unique contribution each of the two Sidros brings to the overall theme of the double-Parshah. So, if Vayak’heil, for example, is about the Mishkan’s building process, Pekudei is about completion of and reflection on that process. And similarly, if Tazria is about diagnosing the spiritual impurity, Metzora is about treating the spiritual impurity.

With that said, what exactly is the common theme of Acharei Mos and Kedoshim? And whatever that theme is, what does each of these two Sidros bring to the table? What apparent theme is introduced in Acharei Mos that Kedoshim builds upon?

From the opening passages of each Sidrah, there doesn’t seem to be much in common between the two Sidros, however, if one reads the texts of both Acharei Mos and Kedoshim in full, towards the end, one might notice that both Sidros respectively include some kind of warning to the B’nei Yisrael about not following the practices of the gentile nations [Vayikra; Acharei Mos 18:3, Kedoshim 20:23] as well as instructions to steadfastly follow the Torah [Acharei Mos 18:4-5, Kedoshim 20:22]. Moreover, both Sidros contain passages about illicit relationships, the idolatrous practice of Molech, sodomy, and bestiality [Acharei Mos 18:6-23, Kedoshim 20:2-4, 10-21]. Both Sidros highlight the Land of Israel’s personified intolerance of impurities, how the land vomits out the people who commit abominable acts [Acharei Mos 18:24-30, Kedoshim 20:22].

Considering this list, it would seem that the Acharei Mos and Kedoshim actually do share a lot. The question then is what, as per our list, is the real theme of these double-Parshiyos? Our list mentions not copying the nations, keeping the Torah, not engaging in any relationships or practices which the Torah deems abominable, and how to not be vomited out of the Promised Land. What is the theme of this list?

Let’s suppose that our list is just a matter of maintaining spiritual purity and how not to get kicked out of the Land of Israel. If so, why do we need Parshas Kedoshim to reiterate what Acharei Mos already laid out for us? What novelty or new lesson does Kedoshim add on to Acharei Mos?
Notwithstanding the fact that the latter sections of Acharei Mos and Kedoshim share a lot in common, the presentation and focus of Acharei Mos and Kedoshim do have their differences. For example, when commanding the B’nei Yisrael not to follow the gentile nations, Acharei Mos emphasizes copying the practices of Egypt as well as those of Cana’an, one land in the B’nei Yisrael’s rearview mirror and another which will be the B’nei Yisrael’s final destination. Kedoshim, however, doesn’t elaborate on who or where.

Moreover, Acharei Mos merely conveys the forbidden or illicit relationships while Kedoshim goes a step further and commands the Jewish court to execute penalties for them.

Also, while both Sidros talk about the land vomiting out its sinful inhabitants, Acharei Mos heavily weighs on this detail about the land, mentioning the word “vomit” no less than three times, and mentioning the contamination of the land, as well, three times. On the contrary, Kedoshim only makes a passing reference to the land’s vomiting and focuses much more on the individual people, that Hashem has separated them from other peoples [20:26].

Acharei Mos begins with a reference to Nadav and Avihu who performed an unauthorized service in the Mishkan and died as a result. It then uses their passing as a springboard for a discussion about the laws concerning how to approach the Kodesh HaKadashim (Holy of Holies) properly, the ritual procedures for Yom Kippur, and the laws of animal sacrifices and Temple service in general.

With that in mind, it seems that the underlying theme of the Sidrah is the sensitivity of Kedushah, holiness or things which are transcendent. There are certain things in this world which exist on some elevated level which cannot be taken lightly. These things are Divine matters, which G-d deems important. Acharei Mos puts forth the concept of this sensitivity. However, Acharei Mos introduces this concept by focusing on the holiness of environment. Acharei Mos, as we mentioned, emphasizes the responsibilities in the Temple as well as the sensitivity of the Land of Israel. The Temple, or the Mikdash, derived from the word “Kedushah,” is holy and therefore has boundaries that cannot be crossed. The Holy of Holies will not tolerate a breaching of those boundaries. In the same way, the Holy Land will not—cannot—tolerate spiritual impurity. It is just an existential reality called Kedushah. What is Kadosh has a transcendent level of existence and is therefore sensitive to any contamination. That is Acharei Mos. What is Kedoshim?

Kedoshim shifts gears from the existential holiness of environment to the imperative of the individual to personally transcend and attain holiness; “Kedoshim Tihiyu”-“You shall be holy” [19:2]. One might notice that Kedoshim does not place as much emphasis on rituals in the Mikdash. Yes, there are religious demands, between man and G-d recorded here, however, just as much if not more, Kedoshim tells us how man must conduct himself as a member of society. He can’t take illegal financial advantage of his peers, he shall assist the poor, he shall not trip up the unsuspecting, he shall love his fellow as he does himself, he shall not pervert justice in court, and so forth.

But where do these responsibilities truly stem from? One might say they stem from common morality or because it’s the right thing to be a good person. The Torah however prefaces with “Kedoshim Tihiyu,” that it stems from our intrinsically holy status which translates into an obligation to transcend. Moreover, at the end of the Sidrah, the Torah seals the entire conversation with “V’Hiyisem Li Kedoshim”-“and you shall be holy to Me” [20:26].

Acharei Mos tells us that the land wants to vomit at the sight of illicit relationships. Kedoshim essentially tells us that we should also want to vomit, that we have to do something in response, that some penalty is an order. Acharei Mos says that we shouldn’t imitate what we see in Egypt or Cana’an, while Kedoshim merely says that we should personally transcend. Acharei Mos tells us that Kedushah exists in the land and the Mishkan, and therefore, the land and the Mishkan must be treated with Kedushah. However, Kedoshim tells us that independent of the Temple and independent of the Holy Land which we long to return to, for no other reason than the fact that “Ki Kadosh Ani”—that Hashem Himself is holy [Ibid.], we have to transcend and tap into our personal Kedushah.

In the end, the pairing of Acharei Mos and Kedoshim powerfully outlines our true spiritual imperatives. Once we’ve internalized Acharei Mos and have identified Kedushah, we have to make sure that the sensitivity of that existential Kedushah spills over into our individual lives and existence so that we too can become Kedoshim.

May we all be Zocheh to be sensitive to Devarim SheB’Kedushah (holy matters), to transcend, ourselves, and fulfill our obligation to re-attain our intrinsic holiness so that we can be welcomed back into the Holy Land with the rebuilding of the Holy Beis HaMikdash with the coming of Moshiach, Bimheirah Biyomeinu! Have a Great Shabbos! (Don’t forget to count Sefiras HaOmer.)
-Josh, Yehoshua Shmuel Eisenberg 🙂