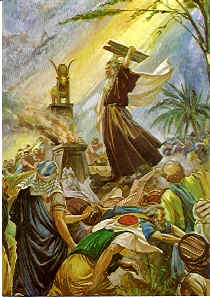 “Etzba Elokim: A Touch of G-d”

Just before relating the national tragedy of the Cheit HaEigel (Sin of the [worshipping] of the Golden Calf), the Torah tells us that Hashem handed Moshe the Luchos, the two Tablets of the Covenant, describing them as “Luchos Even Kesuvim B’Etzba Elokim”-“tablets of stone inscribed with the finger of G-d” [31:18]. But, what exactly does the Torah mean by that? Obviously, the incorporeal G-d does not actually have any fingers, but often enough the Scripture will use human emotions and even body parts to anthropomorphically describe Hashem. That’s fine. And surely, in this light, according to the simple understanding, this line “finger of G-d,” is some kind of metaphor at best, but what exactly is it a metaphor to? Why does the Torah emphasize that the Luchos were inscribed “with the finger of G-d”? What does this imagery mean to convey?

Aside from being a peculiar term in its own right, the expression “Etzba Elokim”-“finger of G-d” is pretty rare in the Torah, even for an anthropomorphic term. We’re more familiar with the oft utilized imagery of the “Yad,” or “hand” of Hashem. What, then, is the unique significance of the “finger of G-d” and why is such an expression used here?

The earliest usage of the expression “Etzba Elokim” in Tanach, if not the only other reference, appears at the beginning of Sefer Shemos, in Parshas Va’Eira, during Makkas Kinim, the Plague of Lice [8:14-15]. The Torah tells us there that despite the fact that Pharaoh’s Chartumim (necromancers) were able to mimic the first two plagues of blood and frogs through Ma’aseh Kishuf (work of sorcery), they were unable to recreate Makkas Kinim, and were therefore forced to admit that the lice was a result of “Etzba Elokim,” “the finger of G-d.” There, Rashi elaborates that during this plague, the Chartumin confessed that this plague could only be from G-d, and therefore could not be duplicated through dark magic [Shemos Rabbah 10:7].

Now, the next question is why the Chartumim used this expression, and what any of this has to do with our context in our Sidrah, the Luchos.

Regarding the first question, why the Chartumim called it “the finger of G-d,” various answers are suggested. For our purposes though, we’ll suggest the following simple explanation considering the basic context of the narrative: As the Chartumim were admitting that this was not the work of sorcery, their main point being that this plague was coming from some higher source, they referred to the plague as “Etzba Elokim,” as if to say that the plague contains the “touch of G-d,” no matter how great or how slight, it was G-dly. Now, it is not like they were willing to throw in the towel and give in to Hashem at that point. Perhaps they had yet to see the “hand” of G-d, and Egypt still needed some more convincing. However, this plague was the beginning of a new perspective, for the Chartumim were, at that point, intelligent enough to admit slight defeat for the first time. They realized that that plague clearly had the “touch of G-d,” because they could not, through any machinations or manipulations, recreate the experience. And indeed, the beginning it was, of a long educational process that would ultimately prove beyond a shadow of any doubt that G-d was always among the B’nei Yisrael.

Fast-forward to our Sidrah. The Torah is now describing the Luchos. But, what we never addressed is why exactly the Torah was describing the Luchos here anyway. What relevance does the Luchos have to what follows? So, obviously, it has everything to do with what follows, because the description of the Luchos is really the ominous introduction to the Cheit HaEigel, because when Moshe comes down to see the B’nei Yisrael dancing around the Golden Calf, he ultimately takes these Luchos, “inscribed by the finger of G-d” and all, and he shatters them.

Why did Moshe throw down the Luchos? One can suggest a bunch of reasons: The people didn’t deserve them. The people missed the point of G-d’s Torah. They violated the covenant symbolized by the tablets. The people needed to understand, perhaps, that what they were doing—the pseudo-idolatry thing—was way worse of a disgrace to G-d’s Torah, and that perhaps they themselves were really the ones who shattered the Luchos. All of these answers would be correct. But, perhaps, for our purposes, one can suggest further, that Moshe’s actions were a response to a fundamental cause of the Cheit HaEigel.

Certainly, what the root of the Cheit HaEigel was, as well, is a complicated issue to which many explanations are offered, but, perhaps we could suggest, along the lines of the Ramban, that the sin was caused by an attempt to recreate the experience of Har Sinai when G-d revealed His Divine Presence to the B’nei Yisrael, when G-d declared before them “Anochi Hashem Elokecha Asheir Hotzeisicha MeiEretz Mitzrayim…”-“I am Hashem your G-d Who brought you forth from the land of Egypt…” [20:2]. Indeed, at the onset on the Cheit HaEigel, the Torah tells us that the people, identified by Chazzal as the Eirev Rav, the “Mixed Multitude” who left Egypt with the B’nei Yisrael [Tanchuma 19], brazenly declared “Eileh Elohecha Yisrael Asheir He’elucha MeiEretz Mitzrayim”-“These are your gods, Yisrael, who brought you forth from Egypt”[32:4]. In this vein, we could suggest more specifically that the overall goal of the Eigel was to essentially recreate, not just an experience, but the Divine work of G-d! Yet, not only were they trying to recreate the work of G-d, but Rashi, on this very verse, citing the Midrash Tanchumah [19], says that they were attempting to do so through Ma’aseh Kishuf! Through sorcery, much like the Chartumim of Egypt, they virtually brought the calf to life and called it G-d! And whether the B’nei Yisrael themselves joined in or not, the best of them merely stood by and let it happen, demonstrating that they, as a whole, ignored the fundamental lesson that they were taught in Egypt—a lesson that even the Egyptian sorcerers had to admit was true, that the “Etzba Elokim” could not be recreated, that G-d is always among them!

Meanwhile, Moshe returns with the Luchos, written “B’Etzba Elokim.” Like the plagues in Egypt, the Luchos contain the “touch of G-d.” What does that mean that these Luchos were inscribed “B’Etzba Elokim”? That these Luchos represent the foundation of what should have been the B’nei Yisrael’s faith, the concept that Hashem is a living and intervening G-d that cannot be manipulated by the work of man or the forces of nature, that Hashem Himself is always guiding the world!  This foundation was necessary for Klal Yisrael to internalize so that they would put their faith, not in their natural capabilities or even the forces of any natural phenomena, but in G-d and His Torah alone! This foundation, they left behind in Egypt and lacked after the Divine Revelation at Har Sinai. This foundation, they made a mockery of when they allowed a molten image of human handiwork to guide them. This foundation, Moshe realized that the B’nei Yisrael didn’t care for, and so, he shattered the Luchos inscribed with this ignored “finger of G-d.”

Had the B’nei Yisrael kept these lessons in mind and realized what even the Chartumei Mitzrayim admitted not too long before, they would have seen the “Etzba Elokim,” realizing that even if it’s wasn’t so obvious, their lives were constantly being touched by a living G-d Who cannot be simplified by an image or even a single experience at Har Sinai. If they truly wanted to connect to the “Etzba Elokim,” they would have had to look no further than the Torah itself—Ratzon Hashem (the Will of G-d)—symbolized by the Luchos which they were so close to receiving. The Torah, not a man-made statue, should have and would have been their guiding light! It would have been the “finger of G-d” Himself that would have pointed them in the right direction if they were willing to pay attention to it.

In our own lives no differently, we cannot allow ourselves to lose our way and resort to solutions foreign to Torah values. There is no guidance that is more authentic or effective than Ratzon Hashem. It bears results which cannot be recreated by the designs of mortal man. Indeed, there is no supplement in the world for the “Etzba Elokim,” and if we’re looking for it in Hashem’s Torah, we will always be able to feel it there. We will sense the “touch of G-d.”

May we all be Zocheh to the sense the “finger of G-d” in our lives, devote ourselves to the Torah that was inscribed by it, following its guidance, and we should truly feel the Hashem’s “touch” with ultimate clarity once again with the coming of the Geulah in the days of Moshiach, Bimheirah Biyomeinu! Have a Great Shabbos!
-Josh, Yehoshua Shmuel Eisenberg 🙂