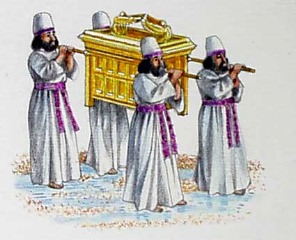 -My grandmother Channah Freidel Bas Sarah
-My great aunt Rivkah Bas Etta
-Miriam Liba Bas Devora
-Aviva Malka Bas Leah
-And all of the Cholei Yisrael
-It should also be a Z’chus for an Aliyah of the holy Neshamah of Dovid Avraham Ben Chiya Kehas—R’ Dovid Winiarz ZT”L, Chaim Reuvein Ben Mordechai A”H, and a Z’chus for success for Tzaha”l as well as the rest of Am Yisrael, in Eretz Yisrael and in the Galus. We all need Moshiach now, please.

Parshas Nasso continues and finishes the discussion of the census of the B’nei Levi as it lists the Avodah (service), or the job description, of the two Levite families, Gershon and Merari. The Parshah accordingly begins [4:21-22], “Vayidabeir Hashem El Moshe Leimor: Nasso Es Rosh B’nei Gershon…”-“And Hashem spoke to Moshe saying: Raise [count] the head of the Children of Gershon…”
Now, what about the remaining one of three Levite families? Where is Kehas? The Avodah of the family of Kehas was addressed at the very end of the previous Sidrah, Parshas B’Midbar. The Torah is following up from there.
The obvious question though is why the three families of Levi couldn’t be all included in the same Sidrah. Why did Chazzal separate them? If they wanted, they could have easily included all of them here at the beginning of Parshas Nasso (and the Sidrah could still be known as “Nasso” as the listing of Kehas actually uses this same exact word [4:2]; “Nasso Es Rosh B’nei Kehas…”-“Raise the head of the B’nei Kehas…”). Or, if one is concerned that Parshas Nasso is already too long (indeed, it is the longest in verses, containing 176 in total), Chazzal could’ve shortened Nasso and listed the Avodah of all three families of Levi at the end of Parshas B’Midbar. In any event, it seems that either option would have made more sense for organizational purposes than to leave Kehas in one Parshah and have Gershon and Merari in the next. Why, then, was the Avodah of Kehas separated from those of Gershon and Merari? What it is Chazzal trying to convey here?

If one looks at the text of the two Sidros closely, one will notice that it is not Chazzal alone who separated the Sidros right in the middle of the discussion of the three Levite families. The Torah itself seems to hint to the apparent division. At the beginning of the Torah’s listing of Kehas, the Torah opens up the discussion, as it would most topics, with the typical introductory words [4:1], “Vayidabeir Hashem El Moshe (V’El Aharon) Leimor”-“And Hashem spoke to Moshe (and to Aharon) saying.” Following the discussion of Kehas, when the Torah reaches the listing of Gershon, it opens up once again, [4:21], “Vayidabeir Hashem El Moshe Leimor,” that which it does not do a third time for the remaining family of Merari. Now, one need not suggest that Merari does not merit any introductory verses, but rather, the introductory verse used for Gershon was meant to cover both of them, making them a collective unit. What emerges is that Kehas, who is not under the same textual umbrella as the other two, is his own separate unit.

As for the question as to why Chazzal have separated the Sidros, one can suggest that the new, introductory verse—“Vayidabeir Hashem El Moshe Leimor”—which the Torah inserts here for the collective families of Gershon and Merari warrants some separation of Parshiyos. The Torah itself suggests the division between family of Kehas and those of Gershon and Merari.

Yes, as per the text itself, some division is apparently appropriate. We can see how the idea of a division between Kehas and the other Levi’im can be suggested, but the obvious next step and question here is: Why did the Torah text suggest there be such a division?
In truth, despite whatever key differences Kehas might have from the other Levi’im, one can still argue that, structurally and thematically, it would make more sense to keep them together than not to.

However, what is apparent is that there is some difference between Kehas and the others which matters enough that the Torah hinted to that qualitative difference which Chazzal further highlighted by separating the Sidros. What is the Torah getting at that Chazzal saw necessary to highlight?

When understanding the particular Avodah of each group of Levi’im, it is slightly more understandable why the Torah and Chazzal saw it necessary to make the division. It is important to differentiate between different levels of Kedushah (holiness), to be Mavdil Bein Kodesh L’Kodesh HaKadashim (to separate between “Holy” and “Holy of Holies”). One should not mistake the Avodah of one group for that of another. They are, in fact, not of the same caliber. The Torah is thus reinforcing this idea that the work of Kehas is objectively holier than the work of Gershon and Merari.

The next question then is: Why? Granted, Kehas has holier work, but why should Kehas be privileged and honored with this objectively holier work? Gershon was the firstborn of Levi. Why are the B’nei Kehas a holier group of Levi’im than the others?

So, although these kinds of questions are difficult to answer head-on, what’s granted is that Hashem has created a spiritual hierarchy and order. Somehow, Kehas happens to be higher up. They’re the family from whom Moshe Rabbeinu and Aharon HaKohein, two great leaders of the generation, had descended. Moreover, all of the Kohanim (Priests) are from Aharon’s family, who, again, are from Kehas. Sometimes, “greatness” and Kedushah are a part of legacies that were created by human effort. Moshe and Aharon became holier. The Levi’im, at the scene of the Golden Calf [Shemos 32-33], remained loyal to Hashem and, as well, became holier. We’ll see that later, Pinchas, a regular Levi, also displays heroic actions and becomes a Kohein [B’Midbar 25]. Sometimes, Kedushah is earned, and yet, sometimes, it is transferred, bestowed upon individuals or a group by mere Will of G-d as He sees fit. Some are just privileged.
Now, is that fair? Hashem’s in charge so although it may not seem that way, really, it is. But how are we to relate to this apparent hierarchy of holiness? How is the apparent division between “levels of Kedushah” not a completely discouraging concept for us to live with? Why should Kehas get more than Gershon and Merari? Why should Kohanim get more than Levi, and why Levi more than the rest of the B’nei Yisrael? “Because they’re holier.” “They have more Kedushah?” But what does that mean?

For whatever reason, those who have an intrinsic value of Kedushah, Hashem has decided, are chosen, fitting to fulfill a very particular responsibility of a level of which only they can fulfill. The very same division exists “Bein Yisrael LaAmim,” between Israel and the nations of the world. Every higher level of a Kedushah is reflective of higher obligation. Indeed, it can be viewed as a “privilege” or as “rewarding,” but it is chiefly a manifestation of Divinely ordinated responsibility more than anything else, which is not always easy to uphold. In fact, more responsibility and obligation, especially in terms of Kedushah, means more room to slip up, and greater consequences for slipping up.
Kehas didn’t merely have the “merit” of carrying holy vessels, but the Torah describes the gravity and potential danger of carrying the holy vessels. The Torah says that the B’nei Kehas needed assistance from the Kohanim because if the B’nei Kehas would look at the holy vessels as they were being inserted into their carrying sacks, they would die [4:18-20]. Kedushah is not fun and games.

Indeed, Kedushah, though a significant title, is not a trophy, and should not be sought after like one. It’s not a means for bragging rights, boasting, and should not be the cause of envy and greed. It’s about responsibility. Responsibility literally means responsiveness or responding to a particular calling—a calling designated for you. That means only if it is your calling, then that’s when you respond. It should not be mistaken to mean looking to take on glorious, major roles not naturally suited to you, roles that you may not be able to properly fulfill. Korach, a Kehasi himself, later in B’Midbar [16], grabs for more Kedushah than is suited for him and that leads him to his downfall. Nadav and Avihu—who were Kohanim—grabbed for more than what was suited for them as well, and they died immediately [Vayikra 10]. Responsibility means acting, not because of honor, personal esteem, or even an outpouring “love of G-d” and all things spiritual, but rather because it is one’s obligation and personalized need to do so.

Can a person practically increase his own personal level of Kedushah and grab a little more? Technically, yes. The evidence of this option is in another topic addressed in this Sidrah, that of the Nazir [B’Midbar 6]. A person can voluntarily pledge to become a Nazir for Hashem temporarily, and the Kedushah of a Nazir is compared to the Kedushah of a Kohein Gadol, a High Priest, technically the holiest level any member of the B’nei Yisrael can reach. But it’s not just a title that the Nazir takes on. He takes on responsibilities, a life of abstinence from spiritual impurity, consumption of grape products, and grooming as he must leave his hair unkempt. If a Nazir doesn’t uphold his new responsibilities, he commits a grave sin. For this reason, not everyone is meant to become a Nazir just because he wants to be holier. The Rambam holds that becoming a Nazir is actually not the ideal [Rambam, Nezirus 10 based on Nedarim 9B]. It is a Mechuyav, an “obligator” and should only be sought when necessary.
Indeed, sometimes, Chazzal do tell us that it is necessary for one to become a Nazir, if for example, he sees a Sotah in her disgraceful trial [Sotah 2A]—he is supposed to be inspired to do a little more. If one feels he needs to do so as to put up fences against his personal Evil Inclination, it is also appropriate [Nedarim 9B]. These are desperate times when one needs to—when one is legitimately called on for those responsibilities, temporarily, to help one return to spiritual balance. But looking for “more” or for “extra” responsibilities is not necessarily a responsible thing to do, especially if one cannot actually keep to them. It is as Mufasa said to his son Simba in The Lion King, “I am only brave when I have to be.” One shouldn’t go looking for burden’s that will test him. It’s dangerous. All the more so when it comes to Kedushah and responsibility, one has to know his place, how much he is able to handle, how much he is called upon to handle, when he is called upon to handle it, and when not.

Wherever we stand on the hierarchy of holiness, we have to appreciate the gravity of Kedushah, know exactly what our obligations are and what are not. We certainly have to live up to already existing obligations. And, yes, we can even take on more pursuits that will enhance our spiritual level and Avodas Hashem when necessary. But we cannot get greedy or boastful when it comes to matters of Kedushah. Every little feature we add may mean more obligations than we already have, some of which we may not be prepared to sustain. We have to remember that with great Kedushah comes great responsibility.

May we all be Zocheh to recognize and fulfill our responsibilities, sustain our respective levels of holiness, grow exceedingly in our Avodas Hashem, and Hashem should rest His Holy Presence among us as His holy nation in the days of Moshiach, Bimheirah Biyomeinu! Have a Great Shabbos!
-Josh, Yehoshua Shmuel Eisenberg 🙂