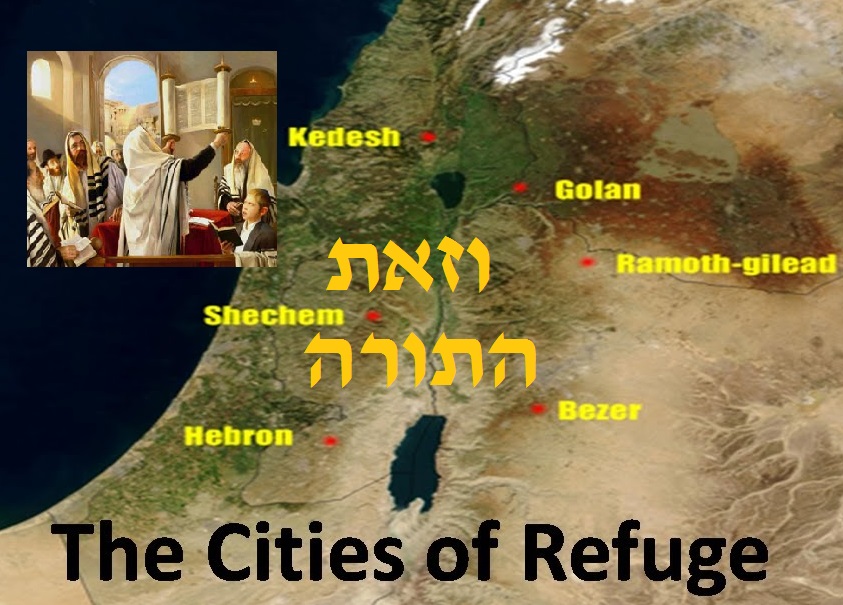 “This is the Torah; Conceptions & Obligations”

Parshas Va’Es’chanan continues Moshe Rabbeinu’s final address to the B’nei Yisrael and uniquely features many famous verses and passages in Jewish tradition and liturgy. Among them is the verse that is recited when the Sefer Torah is lifted up for all to see on days of Krias HaTorah (Torah reading), “V’Zos HaTorah Asher Sam Moshe Lifnei B’nei Yisrael”-“And this is the Torah that Moshe placed before the B’nei Yisrael” [Devarim 4:44]. While, indeed, it is a completely appropriate verse to recite in the context of displaying the Torah scroll, however, the verse’s original context in our Sidrah seems quite unclear.

In our context, Moshe Rabbeinu had just been discussing the wonders and sights of the Har Sinai experience when Hashem revealed Himself to the nation [Devarim 4:1-40]. Then, all of a sudden, the Torah seemingly interrupts this speech to tell us that, right then and there, Moshe Rabbeinu separated three out of the six Arei Miklat (Cities of Refuge) which an unintentional murderer is supposed to flee to in order to be protected from the murdered individual’s relatives who have the legal right to take his life [4:41-43]. Right after, just before Moshe continued his speech and actually recounted the Aseres HaDibros (‘Ten Commandments’; Decalogue) that were given at Har Sinai [4:45-5:18], the Torah inserts our verse, “V’Zos HaTorah Asher Sam Moshe Lifnei B’nei Yisrael”-“And this is the Torah (teaching) that Moshe placed before the B’nei Yisrael.”

Considering the above, we’re left with two questions: (1) Why exactly was Moshe’s speech about Har Sinai interrupted for his designation of the Cities of Refuge? Mind you, it seems as though Moshe himself caused this interruption as the Torah presents it as though Moshe actually stopped speaking to designate the cities right “then”—hence “Az Yavdil Moshe Shalosh Arim…”-“Then, Moshe designated three cities…” [4:41]. (2) The second question is what exactly the Torah means when it says “V’Zos HaTorah Asher Sam Moshe Lifnei B’nei Yisrael”-“And this is the Torah that Moshe placed before the B’nei Yisrael.” What is this verse even referring to? Why does the Torah say it right here? What exactly was it that Moshe was placing before the B’nei Yisrael?

As for the first question, although at first glance, the mentioning of the Arei Miklat is a blatant interruption of Moshe Rabbeinu’s recounting of the Sinai experience, perhaps the Torah is trying to tell us that, in fact, Moshe’s designation of these Arei Miklat is somehow relevant to the larger conversation—that it is not an interruption. So, the next question would be: How?

In answering that question, we’ll return, for now, to our second question about the meaning of the words “V’Zos HaTorah Asher Sam Moshe Lifnei B’nei Yisrael.” We were wondering what it was that the text of this verse was referring to. “Zos” means “this,” but, what is “this” referring to? What is the Torah, or the teaching, that Moshe was placing before the B’nei Yisrael?

It seems that there two simple options of what “this” may be referring to; either the content referenced just before—namely, the passage regarding the Cities of Refuge and everything before that—or alternatively, whatever content is about to follow our verse—namely, the Aseres HaDibros. And in fact, both of these possibilities are suggested by the M’forshim (commentators). On the one hand, Rashi keeps things relatively simple and suggests that “this” is referring to the passage to follow, the one containing the Aseres HaDibros. That is the “Torah” which Moshe placed before the nation. However, the Ramban and R’ Shimshon Raphael Hirsch actually suggest that “this” is referring to the passage concerning the Cities of Refuge.

Now, at first glance, Rashi’s suggestion avoids more complication as it makes more sense to say that the “Ten Commandments” which appear on the Luchos (Tablets) are the teaching which Moshe placed before the people, than to say that Moshe’s designation of the Arei Miklat is somehow part of this fundamental teaching which Moshe placed before them. That is because the Aseres HaDibros represent the covenant that Hashem made with Am Yisrael. The laws of Arei Miklat, on the other hand, are seemingly random and relatively less fundamental.

However, if one looks at the verse following our verse of “V’Zos HaTorah,” they seem to present a new introduction to the Aseres HaDibros, as the Torah says [4:45], “Eileh HaEidos V’HaChukim V’HaMishpatim Asher Diber Moshe El B’nei Yisrael B’Tzeisam MiMitzrayim”-“And these are the testimonies, and the statutes, and the ordinances that Moshe spoke to the B’nei Yisrael when they left Egypt.” Indeed, it seems that this verse is coming to exclude everything before, including the words of “V’Zos HaTorah…” which would be against Rashi’s reading. If that possibly is the case, then perhaps the words of “V’Zos HaTorah…” would have to be referring to Moshe’s separation of the Arei Miklat! But, what would that mean? What is so special about Moshe’s separation of the Cities of Refuge that it is referred to, in this fundamental and famous verse, as the “Torah which Moshe placed before the B’nei Yisrael”?

In truth, it seems on the contrary, that the ideal presented through the Cities of Refuge hardly reflects the larger Torah which Moshe taught the B’nei Yisrael. Because, if you think about the implications of this possibility that contained in the Cities of Refuge is the foundation of the Torah ideals, the verse is basically saying that the Torah’s ideal is simply not to kill fellowman. Now, that seems to be a very minimalist view of how to treat man, no? Aren’t we supposed to go out of our way to acts of Chessed (lovingkindness) for one another? What about observing Shabbos and other such commandments? There is so much more to the Torah than merely not killing people, isn’t there? How, then, do the laws of Arei Miklat, in any way, represent the “Torah which Moshe placed before the B’nei Yisrael”?
This discussion should bring to mind the famous Gemara about the convert-in-training who asked Hillel HaZakein to teach him the entire Torah “on one leg,” or in a quick summary [Shabbos 31A]. There, Hillel responded with what looks like a minimalist view of the Torah, merely stating that “That which is hateful to you, do not do to your friend.” Again though, does this piece even touch the surface of Torah ideals? I mean, of course you shouldn’t do unpleasant things to other people. Can Hillel do any better than that?

So, how is it that the passage of Arei Miklat reflects the “Torah” at large? R’ Hirsch suggests that the verses describing the Cities of Refuge go hand in hand with the earlier verses describing the wonders leading up to the revelation at Har Sinai. This is because the wonders preceding Sinai present us with a “conception” of G-d, while the Cities of Refuge present us with a “conception” of man. The idea behind these “conceptions” is, firstly, that the wonders leading up to Sinai are the basis of Hashem’s existence and personal investment in our lives, thus they represent our fundamental relationship with Hashem. On the other hand, the laws of the Cities of Refuge highlight the value and gravity that is ascribed to human life, thus they represent our fundamental relationship with fellowman. Together, explains R’ Hirsch, “this” package containing the “conception” of G-d and the “conception” of man is the “Torah” which Moshe placed before the nation. Cool.

What’s even more cool though, is that not only is this “Torah,” in fact, a fundamental teaching, but if you think about it, hidden in this “Torah” is specifically the foundation for the Aseres HaDibros which follow, as the Aseres HaDibros are essentially a covenant containing two sets of commandments, one geared towards the relationship between man and his Creator, and one between man and his fellow. With an even closer look, one might notice that each of these sets of commands begins with the “conceptions” of G-d and man as described by R’ Hirsch, as the first command is to believe and acknowledge Hashem “Who brought you forth from the land of Egypt…” [5:6], while the opening command of those relating to mankind is the prohibition against murder [5:17]!

Thus, just before describing the Aseres HaDibros, the obligations which we have towards G-d and fellowman, the Torah gives us this introduction about the conceptions, or our fundamental relationships with G-d and fellowman. Moshe places “this,” a summary of the Torah, if you will, before the B’nei Yisrael!

It all works out quite nicely at the end, as now, we’ve identified and qualified this theory of R’ Hirsch’s, that the “Torah” being presented, by Moshe to the people, is this idea that there is a relationship that every individual has with both G-d and fellowman, and those relationships are founded on appreciation of Hashem’s wondrous acts and the value of human life.

What emerges is that, indeed, exactly as we have suggested, the Torah is only giving us a minimalist view of how to treat man and how to live the Torah. What that means is, of course, there is so much more to Torah than not killing people, just as there is so much more to the Torah than merely believing in G-d’s existence. In fact, the Aseres HaDibros themselves are merely a blueprint for the rest of the Torah whose will permeates every facet of all of our relationships, with all people and with G-d Himself. But, as R’ Hirsch and the much earlier Hillel HaZakein have highlighted, it starts from the fundamental relationships which means simply respecting the presence and existence of the other in our lives. Without that foundation, the Torah is lost. Everything else is hinges on this core concept.  The rest, Hillel points out, is just commentary. So, in the end, this is the Torah…in short, of course. We have our work cut out for us.

May we all be Zocheh to respect the presence of every “other” in our lives, uphold these fundamental ideals in all of our relationships, both with G-d and man, and we should thereby enable ourselves to uphold the even more vast Torah at large, and Hashem should confirm our fulfillment of His Torah with His bringing of the Geulah in the days of Moshiach, Bimheirah Biyomeinu! Have a Great Shabbos Nachamu!
-Josh, Yehoshua Shmuel Eisenberg 🙂