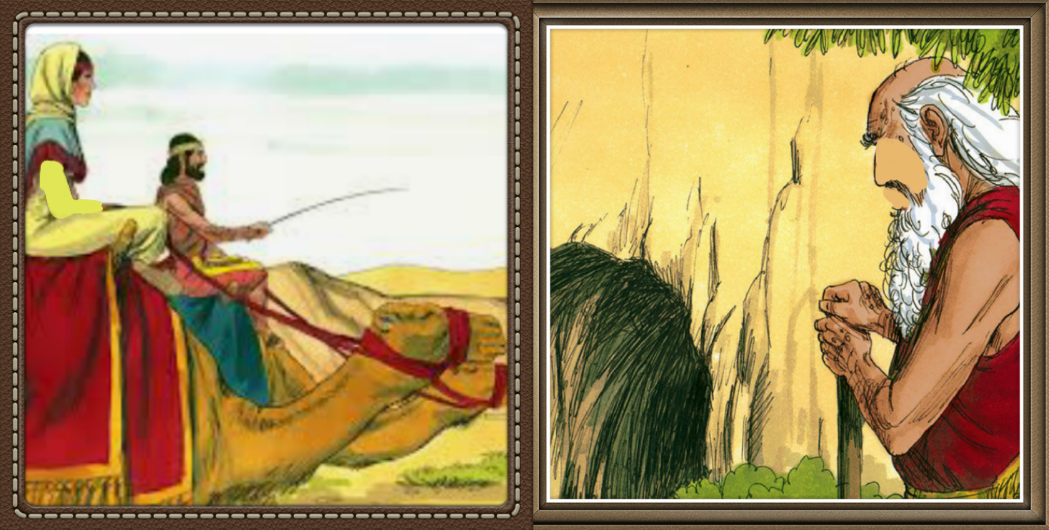 **NOTE: This D’var Torah is dedicated both in honor of my grandfather, Dovid Tzvi Ben Yosef Yochanan A”H, and my younger brother Menachem Mendel Shlomo, a brand-new father of a son who will perpetuate our grandfather’s namesake and legacy, be”H.**

● How Can We Celebrate the Lives of Those Whom We Love?
What Do the 2 Missions of Chayei Sarah Have in Common? ●

“The Life of Sarah”

There is an obvious irony in the name of the Sidrah, “Chayei Sarah”-“Life of Sarah”1 considering that the Sidrah picks up with the apparent death of Sarah Imeinu.

A simple message from this title, some might suggest, is that it is better to focus on the positive rather than the negative, to celebrate life rather than be overwhelmed with sorrow over death. That is not to say that one should not mourn a death. “LaKol Z’man VaEis L’Chal Cheifetz Tachas HaShamayim”-“For everything, there is a season, and [there is] a time for every pursuit under the heavens.”2 There is certainly a time and place for everything, and as such, Avraham Avinu rightfully mourns his wife in our Sidrah.3

There is no contradiction between the celebration of a life lived and the mourning the dead. It is just a question of timing and perspective.

With that said, the perspective of Chayei Sarah is not the mere death of Sarah Imeinu, but in fact, the life of Sarah Imeinu. This much is apparent as title, “Chayei Sarah,” appears in the context of the Torah’s appraisal and praise of Sarah’s one hundred twenty-seven years well-lived. Thus, it is appropriate that her life be emphasized in our Sidrah.

Now, this whole idea of “perspectives” on death is perhaps simple enough when you don’t feel connected to the life lost. But, what if you knew the person? What if it was a loved one, G-d forbid? The sorrow and grief is natural. But, celebrating? Is there ever a way one can truly celebrate the life of that individual?

Perhaps there is an answer to this question in our Sidrah. Because, if we take a critical look at Chayei Sarah, we will find that this matter of “perspective” on life and death is not only expressed in this isolated context at the beginning of Chayei Sarah. This perspective highlighting the “Life of Sarah” is the theme of the Sidrah at large. How exactly is that demonstrated?

Two Missions or One?

There are two main stories in Chayei Sarah, first, Avraham’s purchasing of a burial plot for Sarah4, and afterwards, that of Eliezer securing a wife for Yitzchak Avinu.5 At first glance, these are just two basic “chapters” of history for our forefather. From a stream of consciousness perspective, we can see how they are tangentially related, as once Sarah is “out of the picture,” Avraham’s primary focus becomes the next generation, so that the next reasonable course of action would be for his adult son to get married. With that in mind, Avraham sends his servant off to find his son a wife.

And you know what? That is likely the easiest explanation one can give for the juxtaposition of these stories. It is reasonable, not forced, and just works. As they say, “Life goes on.” “Out with the old, in with the new.” That is often the harsh reality of life. It’s painful, but what can you do? You have to what you got to do and live on.

If we look closely at the two major stories in Chayei Sarah, we will find that they have inherently in common.

We’ve already addressed the obvious relevance between the two stories. Both begin in wake of Sarah’s death; burial is necessary, and once that is taken care of, we get back to life and move on.

But, more inherently, my brother R’ Daniel suggested that both Avraham and Eliezer serve as messengers in the mission of reuniting souls. Through the burial, Avraham reunites Sarah’s soul with the Creator. And through the marriage, Eliezer reunites the separated souls of Yitzchak Avinu and Rivkah Imeinu.

Moreover, both Avraham and Eliezer set out to “acquire” important pieces of the family puzzle. The family burial plot would serve the host for the generations past, and the wife of Yitzchak would serve as the cohost for generations to come.

It is also worth noting that apparently so integral these missions were, both Avraham and Eliezer display an attitude of “no nonsense” determination to properly and fully complete their missions, as Avraham unwaveringly insists on paying for the land which he was offered for free6, and Eliezer refuses to sit and dine with Rivkah’s family until he can get his word out and confirm whether or not Rivkah intends to marry Yitzchak.7

There are other notable parallels between the two missions, perhaps beyond the scope of our discussion, which are worth further speculation, but we’ll give honorable mention here.

Avraham and Eliezer each encounter a man who, on the surface, appears to be more than agreeable to the “mission,” however, Chazal teach us that their insides were not quite like their outsides. Both were apparently greedy individuals who were just putting on a show.

Chazal teach us that Ephron Ben Tzochar was one “who spoke much, but even a little, he did not do” as he said he would grant Avraham the gravesite for free but ultimately seized four hundred silver Shekalim’s worth from Avraham in exchange for it, an apparently large sum.8

Rivkah’s brother Lavan appears to display a religious response to Eliezer’s request; “…MeiHashem Yatza HaDavar Lo Nuchal L’Dabeir Eilecha Ra O Tov”-“…From Hashem has the matter emerged [thus] we cannot speak to you bad or good”9 yet, Parshiyos later, when G-d commands Lavan not to speak to Yaakov—“…Hishamer Lecha Pen Tidabeir Im Yaakov M’Tov Ad Ra”-“…Guard yourself lest you speak with Yaakov from [whether] good until [or] bad”10—Lavan is a little more hesitant to comply with Divine Will. Apparently, he was not motivated by morals or Divine Will, but by his greed.11

Interestingly, both Avraham and Eliezer both bow twice during their missions.

The expression of “Hishtachavayah,” bowing, may seem like a common enough occurrence in Scripture, however, the extent to which this verb appears in these two stories calls attention to itself.

Moreover, it’s not just the bowing, but the context in which each of them bows. The first time each of them bows is when they are each benevolently welcomed by the people of the land, in Avraham’s case, by the B’nei Cheis12, and in Eliezer’s case, by Rivkah.13

The second time each one bows is when the individuals Avraham and Eliezer were respectively negotiating with expressed their willingness to cooperate with the arrangement, in Avraham’s case, Ephron14, and in Eliezer’s case, Lavan and his father Besueil.15, 16

Again, whatever the particular significance of these last two parallel variables might be is worth speculating further. However, there seems to a larger picture discussion to be had about these two stories. From the grand view of Chayei Sarah, what does the mission of Avraham fundamentally have in common with that of Eliezer’s?

The Concept of “Levayah” – A Two-Lane Bridge

Before we answer that question, let us return to the solemn discussion which we have begun with, that of death.

In Jewish tradition, when someone passes away, a Levayah is held for them. A Levayah, in simple terms is a Jewish funeral. However, literally translated, it is an escorting of the deceased. What exactly is the purpose of this escorting?

At first glance, the goal is merely to send off of the deceased. However, that is only half of the process. One can easily send someone off without escorting them. Levayah, escorting, means to accompany or to walk out with the individual. Why is that significant? Because when you walk out with someone, you maintain a bond, a relationship with that individual.

In this way, a Levayah can be likened to a two-lane bridge between the physical and spiritual realms. On the one hand, there is a burial. The burial serves as the lane which leads from the physical life to the purely spiritual. However, as implied by the term Levayah, there is an “escorting” which means to maintain a relationship, to pave a lane which actually leads from the spiritual realm back to the physical. It is this “lane” through which the soul can travel back and live on among us perpetually in this physical world. Thus, Levayah means both the sending off and the perpetuation of the deceased.

Let’s return to our Parsha…

Indeed, the missions of Avraham and Eliezer in our Parsha are in fact, one mission—two sides of the same coin. And what they have in common is not just transition from generation to generation. The “missions” in our Sidrah are all about “Chayei Sarah.” We mentioned earlier that “Chayei Sarah” indicates that it is not merely her death, but her life that is the focus. With that same understanding, Chayei Sarah is not merely about the Matriarch’s passing, but about her perpetuation. And that is exactly what we see between the two missions of Avraham and Eliezer.

Avraham digs Sarah’s grave, physically representing her sendoff. But, this Levayah was not complete. He turns to the needs of his son Yitzchak. Why now? Is it merely because now, “Sarah’s out of the picture”? If one thinks about it, although we defended this suggestion earlier, it is a somewhat odd suggestion. It is not at the moment that one’s spouse passes away, G-d forbid, that one should start thinking about his or her child getting married. Optimally, both parents would be around for the wedding.

The reason Avraham charges Eliezer to find a wife for Yitzchak immediately following Sarah’s burial is that Sarah Imeinu needs a “replacement”—NOT to be a mother for Yitzchak obviously, but to serve a mother and Matriarch for the nation of monotheism! Thus, Eliezer sets out to find, not merely a wife for Yitzchak, but Sarah’s successor as Matriarch of Monotheism. He helps Avraham fulfill the second and perhaps most important part of a Levayah, the maintenance of the relationship, the perpetuation of the legacy.

Thus, the Torah tells us that when Eliezer finally brings Rivkah home to Yitzchak that he enters her into “the tent of Sarah his mother,” at which point, he is magically “consoled” from the loss of his mother.17

Perhaps the greatest sorrow that comes with the loss of a loved one is the thought of possible incompletion in that loved one’s life mission and the seeming lack of access that we end up having to that loved one. However, in the first formal Levayah in the Torah, Avraham and Eliezer teach us that, done right, a Levayah keeps our loved ones with us. Done right, Levayah necessarily entails human effort towards active perpetuation of that loved one. That means that we have to become and produce successors to follow the virtues and carry on the mission statement of that loved one, however possible. Yes, we need to pave the lane for our loved one to access to the spiritual world as Avraham did for Sarah. But, more importantly, we have to follow Avraham’s apparent charge to Eliezer and pave the lane back to this world so that our loved ones may perpetually live on through and among us. When those lives are being properly perpetuated, they don’t leave us. We celebrate them as they are with us forever.

May we all be Zocheh to perpetuate the legacy of all of our loved ones and perpetuate their legacy and missions, as well as the legacy and missions of our Avos and Imahos HaKedoshos, and we shall be reunited with them once again the Olam HaEmes with the Geulah and the days of Moshiach, Bimheirah Biyomeinu! Have a Great Shabbos Mevarchim Kisleiv!
-Yehoshua Shmuel Eisenberg 🙂