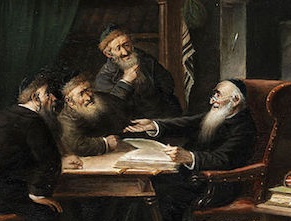 THIS D’VAR TORAH IS ONE OF MANY PESACH IDEAS THAT I’VE WRITTEN UP FOR MY PERSONAL HAGGADAH. IF YOU’RE INTERESTED IN HAVING A WORD-DOCUMENT COPY OF THE HAGGADAH, PLEASE LET ME KNOW. CHAG SAMEI’ACH!

“Even if We Were All Chachamim…”

One of the more unusual sections in the Haggadah is that of the “Four Sons,” which talks about four kinds of sons and describes how we ought to address them when relating the story of Pesach.

Although most famous for their place in the Haggadah, the true origin of the Four Sons is actually the Torah itself, as the Torah, on four separate occasions, instructs us to address our sons, with a different speech for each occurrence. The Haggadah comes to teach us that these differing responses are meant to address four different kinds of sons.

It all makes perfect sense until we get down to the text of the Four Sons in the Haggadah. Indeed, one issue about the Four Sons that bothers many is that the Haggadah veers from the Torah’s instructions as to how to address a couple of these sons. The most obvious change is in the son whom we refer to as the Chacham, or the Wise Son. If one looks at the Chacham as he appears in the Torah’s text, “What are the testimonial commandments, the decrees, and the ordinances…?” [Devarim 6:20], when answering him, the Torah tells us to respond with the paragraph which we know as “Avadim Hayinu”-“We were slaves…” [Ibid. 6:21] which highlights the story of the Exodus. This paragraph, we know, is import because we insert at one if the earliest points of the Maggid. But, the obvious question is why the Haggadah does not instruct us to answer the Chacham’s question with this text.

But in truth, the more we think about the Haggadah’s response to the Wise Son, the more it seems to make sense. He asks what the particular kinds of Mitzvos are, and the Haggadah tells us to identify those Halachos to him.

Conversely, the more we think about the Torah’s response to the Chacham, the stranger it seems. He asks us about the Mitzvos and we answer him with the story of Pesach? He didn’t ask for a story. Presumably, he knows the story already. Either way, he wants to know and understand the Halachos.

We might contrast the Torah’s response to the Chacham to that of the Torah’s response to the Tam, the Simple Son, a response which the Haggadah does not change. The Tam asks “What’s this?” (which can be understood as “What are we doing and why are we doing it?”) and we answer him with the basis for our actions which he is observing, “B’Chozek Yad Hotziyanu Hashem MiMitzrayim MiBeis Avadim”-“With a strong hand, Hashem brought us forth from Egypt from the house of bondage” [Shemos 13:14]. Here, the Tam asks a simple question, and everyone “agrees” about the answer to give him.

So, why, when it comes to the Chacham, does the Torah not directly answer his question? And, why, if the Torah insists on answering the Chacham in this odd way, does the Haggadah suggest differently?

As far as why the Torah insists on answering the Chacham with Avadim Hayinu instead of identifying the Halachos, it could be that the Torah is trying to reach us a powerful lesson in educating our children, especially when we consider the Mitzvah of Sipur Yetziyas Mitzrayim. That lesson is that whatever your son asks you, and as smart as he is, you still have to begin with Yetziyas Mitzrayim. Even if his question did not warrant the story, he needs to hear it, and if he already heard, he needs to hear it again until he feels it. He needs to feel it because it is the basis for our Torah observance. Moreover, that is what every individual must meditate on at the Seder specifically, as the Haggadah itself informs us in its text of Avadim Hayinu: “VaAfilu Kulanu Chachamim…Kulanu Yod’im Es HaTorah Mitzvah LiSapeir Bitziyas Mitzrayim”-“and even if we were all wise people… [and] if we would know the Torah, there is a commandment upon us to relate the Exodus of Egypt.” That is because when it comes to actually experiencing redemption, even being wise in Torah, although certainly a crucial life goal, is insufficient. More than a night of Divrei Torah and Divrei Halachah, Seder night is a night of Sipur, a night of experiencing and reliving Yetziyas Mitzrayim. That’s why the Torah addresses him with Avadim Hayinu.

So, why does the Haggadah ignore Avadim Hayinu? In truth, it doesn’t. We know that well before we even reach the Four Sons, the Haggadah begins the Sipur with Avadim Hayinu. The Torah’s answer to the Chacham is the textbook answer for most of us. It’s s prerequisite for the Seder!

Thus, we could suggest that the Haggadah does not give a response to the Chacham to the exclusion of Avadim Hayinu. It’s informing us a new idea entirely, that while we must focus on the Mitzvah of the day, which is Sipur Yetziyas Mitzrayim, we must not forget to answer our children’s actual questions (which may be hinted to in the words “V’Af Emar Lo K’Hilchos HaPesach”-“and [you should] even answer him according to the laws of Pesach” in addition to Avadim Hayinu). If he has a question in Halachah, although it’s not main focus of the day, it is also a matter of priority that must be addressed. Don’t forget to answer his question.

But, what all of the above might imply, astonishingly, is that although there is an obvious, overarching life goal of becoming a Chacham, on Seder night, the questions that we really ought to be asking might just be those of the Tam, the Simple Son. True, he’s not the smartest, and he may or may not have known the Pesach story beforehand, but his simple questions are questions which, in and of themselves, warrant Sipur Yetziyas Mitzrayim! He wants to know what is going on, why we are doing what we’re doing, and we answer his question directly with Sipur, because the Sipur, without a stretch, is the answer to his question! That is why the Haggadah does not change anything from what the Torah said. “B’Chozek Yad Hotziyanu Hashem MiMitzrayim MiBeis Avadim!” That is the answer!

And if we look at all of the strange practices which, the Gemara explains, are for the purpose of getting the children to ask, whether it’s dipping Karpas or removing the table before Maggid, isn’t it clear that the questioner is a curious, simple observer? Although the Haggadah is obviously for everyone, no less the Chachamim at the table, it is the Tam whose questions the Haggadah actually addresses directly!

This point is vital for Pesach, because again, the goal of the night is not to attain wisdom or sharpen our minds. On the contrary, “Afilu Kulanu Chachamim,” it doesn’t matter tonight! That means that we must not allow ourselves to lose the essence of the Seder just because we know the story already or because we’d rather focus on becoming Talmidei Chachamim and engaging in Halachic discourse.

On Pesach night, in some ways, we might want to look the Seder through the lenses of the Tam. Because if we do, we’ll end up asking the questions that will revolve around the true essence of the day, questions that will warrant the simple answer of Sipur Yetziyas Mitzrayim. With this youthful curiosity and imagination, we will move a step closer toward that goal or not only learning the story anew, but reliving Yetziyas Mitzrayim.

May we be Zocheh to not only grow wise in Torah, but to harness the imagination and attitude necessary to truly relive Yetziyas Mitzrayim and even further, experience the ultimate Geulah and the coming of Moshiach, Bimheirah Biyomeinu! Have a Great Shabbos and Pesach/Chag Samei’ach!
-Yehoshua Shmuel Eisenberg 🙂