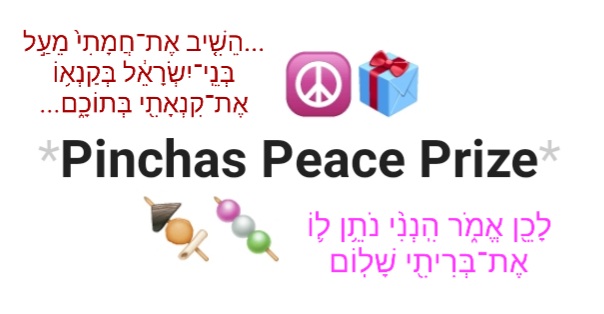 Parshas Balak ended with the deed of Pinchas that is rewarded in this week’s Parsha. As is known, while B’nei Yisrael were engaged in “intermarriage” and the worship of Ba’al Pe’or, Pinchas executed tribal leader Zimri, the most esteemed culprit. Now, Hashem rewards Pinchas.

Among the prizes he earned, Pinchas received a Bris Shalom, or a “covenant of peace.” It sounds wonderful, but what exactly is that and why was Pinchas granted this? Was this just some symbolic token of recognition, to be inscribed on a plaque? What was the nature of this “Peace Prize”?

The deeper message of Hashem’s appraisal of Pinchas is a response to the perceived irony in the story, that is, the public conception of peace and how Pinchas’s particular actions flew in the face of that conception. We think of peace as simply meaning not fighting and not being confrontational or intolerant. Many would suggest that any acts of violence or gestures of intolerance, as a rule, interfere with the flow of peace.

However, here, we’re taught that in G-d’s book, literally, at least in certain circumstances, some deeds which are provocative, inflammatory, and seemingly not peaceful to the public eye, could actually be a harbinger of peace. That means, for example, that even if the B’nei Yisrael were getting along with each other and perhaps with their gentile neighbors while they were blatantly abandoning the will of G-d, their perception of peace would not endure, hence, the plague from G-d.

On the other hand, when Pinchas, who was the only one who was zealous enough to act on G-d’s behalf, proceeded to kill a tribal leader, out in the open, he engaged in a deed that was sure to “disturb the peace.” Yet, in response, G-d dispelled that notion and made it publicly known that Pinchas restored the peace.

Apparently, what that tells us is that true peace is apparently not defined or brought about by being soft, passive, open, and “tolerant,” per se, but rather, by standing up and acting for what is right in G-d’s eyes. G-d does not reassure peace for the quote-unquote “peaceful.” Human’s may award peace prizes to political leaders who talk about peace, which takes no courage, intelligence, or sacrifice at all. Peace is reassured G-d’s will is upheld even if it means disturbing the perceived peace around you.

This is perhaps the deeper meaning of the statement of Rebbi Elazar in the name of Rebbi Chanina that “Talmidei Chamim Marbim Shalom BaOlam”-“Wise (Torah) scholars increase peace in the world” [Brachos 64A]. Indeed, many might intuitively scoff at this statement and dismiss the Talmidei Chachamim themselves as intrusive, rigid, religious fanatics who disturb the peace. “If only they’d be more open and tolerant…”

Interestingly enough, the word “Pe’or,” the name of the Avodah Zarah which Pinchas stopped us from worshipping, means a “gap” or an “opening.” The service of Ba’al Pe’or means the worship of “openness.” Everything is legal. The worship itself entailed defecation in front of the idol, demonstrating just how open the worship could be. It sounds quite tolerant. Why can’t everyone just be open in the name of peace, acceptance, and tolerance? The problem is that there are many things that Hashem deems unacceptable and intolerant, such that if we embrace those things against the Ratzon Hashem, there will not be peace.

Pinchas was a Talmid Chacham who understood this. True Talmidei Chachamim of all generations see the larger picture and seek out the Ratzon Hashem and thereby pursue the goal of true “Shalom Al Yisrael.” And the truth is, one has to be a Talmid Chacham to know when to stand up and when to back off. It could be that many of us today lack the wisdom, insight, or even the proper circumstances to engage in an such an extreme act of zealotry the way Pinchas did. And perhaps, fortunately enough for us, that’s not our Avodah. But, at the very least, when something rings controversial, one should have the humility, common sense, and concern, especially in the face of doubt, to back away and suppose that maybe, just maybe, this is not the Ratzon Hashem and could have no peaceful end.

At every given turn, the first question should always be: What is Ratzon Hashem? The available answers will not always be black on white and many times, the question of “peace” may be part of the calculation (Chazal will often issue a ruling due to “Darkei Shalom”-“peaceful manner). But, the pursuit of “peace” in vacuum never overrides Ratzon Hashem, and in fact, does not end in peace if it does. “Tolerance” for the sake of “tolerance,” “peace” for the sake of “peace,” are a manifestation of Pe’or, devoid of any intellectually honest search for Ratzon Hashem. If we are intellectually honest, we will seek out the Ratzon Hashem. And in that Zechus, we should be Zocheh to an eternal Bris of Shalom!