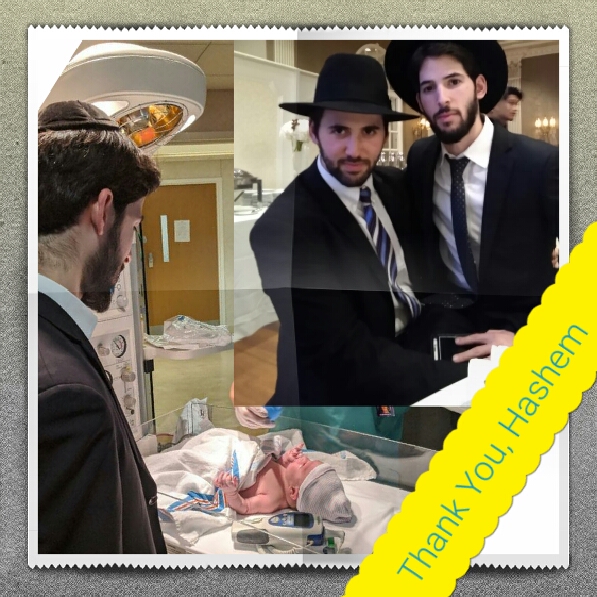 Today, at this most emotional time for my family, I break the script again to share a relevant Parsha idea in response to the reality of Mendy’s injury on the one hand and my son’s birth on the other.

Following the birth of her fourth son, Leah Imeinu declares “HaPa’am Odeh Es Hashem”-“This time I will thank Hashem.”1 It is based on this declaration that Chazal teach us that Leah was the first individual to ever give thanks to Hashem.2

An Ungrateful and Thankless World

This shocking tradition begs an obvious question: Is it possible that not a single person in the history of the world had ever thanked Hashem before Leah had done so? Were all of the Tzadikkim who preceded her just that ungrateful, lacking in basic Hakaras HaTov—acknowledgment of the good done for them?

This notion that no one before Leah had ever been Makir Tov to Hashem is not only implausible, but if we think about it, it is just an utter impossibility. Two thirds of the Avos and half of the Imahos preceded her—and Chazal mean to tell us that none of them ever acknowledged the goodness of Hashem? Moreover, there seems to be proof in the text of the Chumash that such an allegation against humanity could not be true. For example, the Torah tells us that Avraham Avinu and his servant Eliezer had each respectively bowed before Hashem, evidently as a thankful response to His goodness.3 We find Avraham was overtaken by ecstatic laughter upon hearing good tidings from Hashem.

Considering all of the above, how could Chazal suggest that Leah was the first individual to thank Hashem? What did they mean?

Before we completely discount Chazal’s suggestion that Leah was the first to thank Hashem, it is interesting to note that at least from the text of Chumash, we actually find that no one before Leah had ever been described as having specifically thanked Hashem with the expression of Hoda’ah, the expression of thanksgiving. Yes, we find bowing and ecstasy. We also find individuals blessing of the Name of Hashem and offering of Korbanos. However, quite consistent with Chazal’s seemingly wild suggestion, we do not seem to find the specific expression of thanks. The question is: Why not?

Apparently though, the Torah sought to differentiate Leah from her predecessors. Yes, they were surely grateful for the good, but Leah’s thanks was somehow different. But, what is that difference?

The truth is that when we look at Leah’s expression of thanks, she actually does not appear to be more grateful, but actually less so than her predecessors. Indeed, perhaps equally troubling as the notion that none of Leah’s predecessors had ever given thanks to Hashem is that if Leah is the apparent model of giving thanks to Hashem, then she seems to have done a lousy job, at least at first glance.

As was mentioned, her exact words were, “HaPa’am Odeh Es Hashem”-“This time I will thank Hashem.”1 The pressing question is: What did Leah mean, “This time”?! Was she implying that she had not thanked Hashem until He granted her a fourth son? Why should she have waited until bearing her fourth son to thank Hashem? How could she not have done so? That sounds pretty ungrateful. Hashem had previously blessed her with three healthy children, and that is more than we could say for Leah’s sister Rochel Imeinu who had no children at the time. “Thank You, Hashem—but just this time.” What kind of thanks is that? What kind of model of thanks is Leah?

Not only is it literally unbelievable that none of the Tzaddikim before Leah had ever thanked Hashem, but it is equally unbelievable that Leah herself had not shown her gratitude to Hashem before bearing her fourth son. The question is then is what Chazal meant that Leah was the first, and what Leah meant with her dubious, supposed words of “thanks.”

Perhaps, in order to answer these questions, we have to explore the difference between two classical Hebrew expressions of thanks which we have be thus far been using interchangeably; “Hakaras HaTov” and “Hoda’ah.” Perhaps we should not be using them interchangeably. Granted, both terms seem to be connected to the theme of gratitude and thankfulness; however, perhaps there is a marked difference between them. We have to assume that Tzaddikim such as our Avos and Imahos were Makir Tov—that they literally recognized and acknowledged the good things that were done for them. As was mentioned, even Avraham’s servant Eliezer had Hakaras HaTov.

But, apparently, the phrase of Hoda’ah was only attached to the thanks of Leah. The question is: What is the meaning of this sophisticated level of thanks that is communicated by the expression of Hoda’ah?

A Full Sense of “Unentitlement”

As to why Leah had only expressed this “Hoda’ah” upon bearing her fourth son, Rashi4 famously cites the tradition that Leah had prophetic insight and was thereby informed that between Yaakov Avinu and all of his wives, he would ultimately bear twelve sons who would become the Tribes of Israel; however, she was apparently not privy to the exact information as to how the sons would be allocated between all of Yaakov’s wives.

Leah had assumed naturally that each of Yaakov’s eventual four wives would bear three children. Thus, once she saw that she had born a fourth, she understood that she was allotted more than her expected portion.

It is perhaps this sense of “unentitlement” that separates Hoda’ah from Hakaras HaTov. Hoda’ah, as is known, shares a root with Viduy, an expression of confession and admission. Leah admitted that she had been dealt disproportionately well in the area of childbearing.

Many are Makir Tov and many may even declare a hearty “thank You” to G-d.  But, how many people can do so with a full heart? How many can do so with full knowledge that he has zero entitlement? Most of us simply cannot because we do not have prophetic insight to even have expectations and a sense of entitlement to begin with, yet, we all have expectations and feel somewhat entitled. Even when we thank Hashem, there is likely at least the slightest sense of “I deserve this” or “It makes sense that Hashem granted me this because G-d promised this to me.”

Perhaps even the Avos did not have a full view of their entitlements to know that which was coming to them and that which was not. They had known certainly that Hashem had made them promises, many of which were on the basis of their obedience to Hashem’s will. And of course, every step of the way, they demonstrated Hakaras HaTov, appreciation and thanks in the “classical sense,” of course, on their exalted level. But, Leah was given unique insight into her “unentitlement,” to recognize that she was undeserving, the ability to thank Hashem with that sense of “I do not deserve this.” Thus, with the birth of her fourth son, Leah declared, “Now—this time, I know I can thank Hashem with a full heart, recognizing that I have received more than my portion…”

Did Leah only thank Hashem for this child? That is difficult to believe. She must have had appreciation for the other children that Hashem had given her. But, perhaps she now thanked Hashem with a sense of “Hoda’ah.” Perhaps we can add that this “Hoda’ah” was a retrospective thanks on all the children that made up her larger portion, as indeed, her larger portion consisted of all of the children she had until that point, not just the most recent.

“Thank You” for Us Non-Prophets

We certainly do not know what our entitlements are any more than the prophets who preceded us knew theirs. The test is then greater for us. If we have expectations and a sense of entitlement, we will never thank Hashem with a full heart, with a full Hoda’ah. A tip would be for us to look at what others do not have, and not at what others do have. We should ask ourselves what we are truly entitled to and what “the world” owes us.

At the very least, we have to do our best to bless Hashem “Yom Yom”-“every day,”5 to try to appreciate the blessings Hashem grants us each day. But, if we can go a step further than that, we should yearn to actually thank Him with this sense of “unentitlement.”

Not unrelated, perhaps another dimension to Leah’s unique thanks “this time” is the contrast between the mixed emotions she had experienced thus far, and the overwhelming feelings of thankful ecstasy that she had experienced “this time.” Considering Leah’s desperation for her husband’s love, considering the tears she had cried at the birth of each child to her husband which she had hoped would bind her to her husband, only now could she bring herself thank Hashem with a full, undivided emotion of thankfulness.

Perhaps, in Leah’s words, is the message that “Regardless of the pain which that I’ve experienced—that has still not fully escaped me—this time, I will fully thank Hashem, with full appreciation. When Hashem has given me more than I could have lobbied for, I will thank Hashem with a full heart.”

The above is relevant to all of us, certainly to me no less now than ever. I have recently jumped from hospital to hospital, from visiting my brother Mendy to welcoming my firstborn son to the world. In life, we often have legitimate reasons to feel pain, to ask questions, and to cry. But, every now in then, we have to find a time—“this time”—to take a step back and count our blessings, to really think about the goodness Hashem has given, continues to give, and will continuing giving us. We need to find a “this time” to consider what we really deserve or do not deserve. We need a “this time” to give Hashem undivided thanks, a full emanation of Hoda’ah.

May we all be Zocheh to thank Hashem for every blessing He grants us, and ultimately, we should be able to thank Him, “this time” for the tidings of the Geulah Shileimah, the coming Moshiach, Bimheirah Biyomeinu! Have a Great Shabbos!