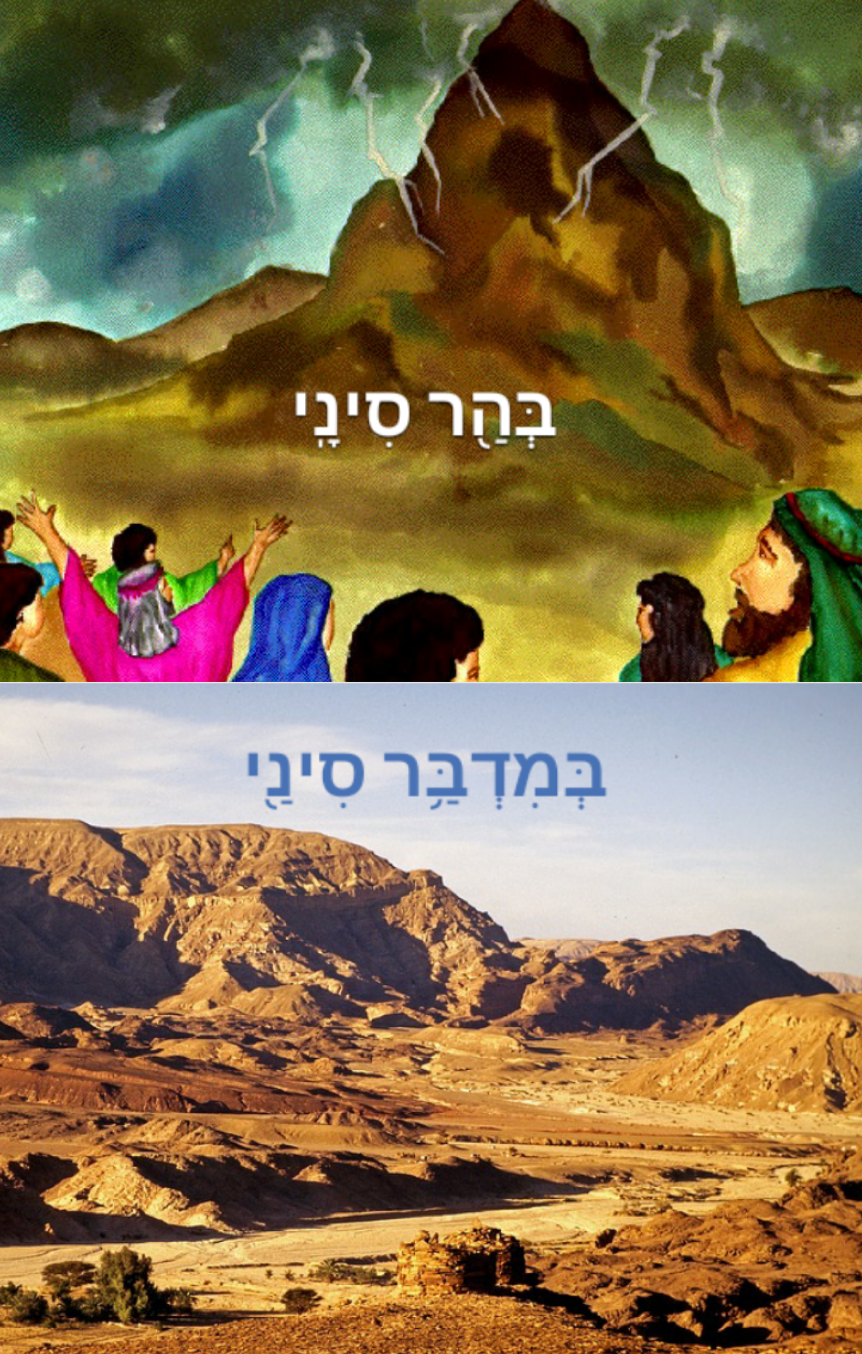 ● Why name a Book after the nonspecific setting, “In the Desert”? ●

“In the Desert of Sinai”

With Sefer Bamidbar, the Torah begins a new chapter in the lives of the B’nei Yisrael. Before we begin to consider the details of Parshas Bamidbar, let us get some inkling as to what this new book is about. One would imagine that the title of the book would be a promising place to start. The name of the Sefer, “Bamidbar” means “in the desert” or “in the wilderness.” Is that title indicative of anything that is to follow, leaving any clues as to what to expect in this Sefer? All that we can ascertain is that contents of this book took place “in the Midbar.”
For further of the context, the opening Pasuk, upon which the title is always based, states: “Vayidbeir Hashem El Moshe B’Midbar Sinai B’Ohel Mo’eid B’Echad LaChodesh HaSheini BaShannah HaSheinis L’Tzeisam Mei’Eretz Mitzrayim Leimor”-“And Hashem spoke to Moshe in the desert [wilderness] of Sinai, in the Tent of Meeting, on the first of the second month in the second year since their going forth from the land of Egypt saying.”1, 2

Here, we’re provided a couple of more details, including a setting and calendar date, but the focal point of the book remains vague. Perhaps the next verse will help; “Se’u Es Rosh Kal Adas B’nei Yisrael L’Mishpichosam…”-“Raise the head [take a headcount] of the entire assembly of the B’nei Yisrael according to their families…”3

Here, with the commandment for Moshe Rabbeinu to begin a census of the B’nei Yisrael, the the Sefer and Sidrah are officially underway. Now, we might have just enough information to really appreciate the key information that we don’t have.

TODAY’S SITE: “In the Wilderness of Sinai”

Considering what we now know, that the fourth book of the Torah begins with a census in the wilderness, the question is why this Sefer should rightfully be named after the Midbar? Now, as we’ve already pointed out, the plain answer to this question is that “B’Midbar” is one of opening words in the Sefer (and the word appears just infrequently enough that it could stand out as a title).

REVISITING: Back “At Har Sinai”

Understanding the significance to the different names of our fourth Chumash may entail an understanding of the Sefer in its larger context. It is, after all, part of a series and a continuation of Vayikra. Therefore, one has to look at Bamidbar’s setting in light of the section immediately preceding it, at the very end of Sefer Vayikra.

Our Sidrah opens with a command from G-d having taken place, “B’Midbar Sinai”-“in the desert [wilderness] of Sinai.” But, if one looks at the last line of Parshas B’Chukosai though, the Pasuk specifies, “Eileh HaMitzvos Asheir Tzivah Hashem Es Moshe El B’nei Yisrael B’Har Sinai”-“These are the commandments that Hashem commanded Moshe, to the B’nei Yisrae at Har Sinai.”4
Indeed, earlier in that section, the Torah had written similarly, “Eileh HaChukim V’HaMishpatim V’HaToros Asheir Nasan Hashem Beino U’Vein B’nei Yisrael B’Har Sinai B’Yad Moshe”-“These are the statutes, the ordinances and the teachings that Hashem gave [placed] between Himself and the B’nei Yisrael at Har Sinai in the hands of Moshe.”5
Finally, we have the famous opening of Parshas B’Har, “Vayidabeir Hashem El Moshe B’Har Sinai Leimor”-“And Hashem spoke to Moshe at Har Sinai saying.”6

These versus appear closely parallel to the opening verse of our “new book,” but the critical difference between all of these verses and ours which, at this point, can no longer be ignored is that Vayikra ends particularly “B’Har Sinai”-“at Mount Sinai” while this new book, in contrast, picks up specifically “B’Midbar Sinai”-“in the desert [wilderness] of Sinai.”
What is one to make of this exchange?

VENTURING ONWARD: To the Desert

Apparently, the opening of Bamidbar represents some transitioning stage in the journey and mission of the B’nei Yisrael.
What was the nature of the stage and setting for Sefer Vayikra? Vayikra is comprised of little narrative and contains the most Mitzvos of the Chamishah Chumshei Torah. It is a book that deals chiefly with Kedushas Am Yisrael, the different levels of holiness that exist among the Nation of Israel. Vayikra conveys the laws of Avodah SheB’Mikdash or Temple service, Tumah and Taharah—ritual purity, the Moadim or festivals, the demanding laws of Sh’mitah—the Sabbatical of the land, and many societal laws as well. It undoubtedly marks the peak of the covenant that is the Torah, the eternal “teaching” and “instruction” of the B’nei Yisrael. Thus, despite the fact that the general landscape and area which Vayikra took place in was the desert, in essence, Vayikra which is concentrated on the teaching of Mitzvos, is rightfully summarized as taking place at Har Sinai. The book Vayikra ends at the peak of “Har Sinai,” the icon and center iconic of Torah transmission and the beginning of Klal Yisrael’s eternal Avodas Hashem.

If the above is true, then what exactly is the hallmark of this new stage, Bamidbar? Bamidbar would reasonably mark the next step of that journey. Even in its most plain sense, Bamidbar discusses the census and formation of the tribal encampment as they will venture forward through the desert towards the Promised Land of Israel. They are picking up from the foot of the mountain to the wide wilderness. But, more fundamentally, Bamidbar is carrying over of the inspiration and covenantal teachings of Har Sinai to the wilderness, the beginning of our actualization of the mission that was scoped out at Har Sinai.

In fact, Ramban describes the formation of the tribal encampment around the Mishkan in the Midbar as the manmade recreation of the Sinai experience where the nation again surrounds the abode of Hashem’s Presence. Thus, Bamidbar is the test one faces when coming off of the high of Sinai. It’s the hope that Yisrael will realize its charge as Hashem’s Mamleches Kohanim V’Goy Kadosh4, His Kingdom of Priests and Holy Nation when the going gets tough, when push ultimately comes to shove.

All in all, we too have to appreciate the mission of Bamidbar and understand that we as a collective and as individuals have a long journey through the desert towards Hashem’s Promised Land. We have to carry the contents of our covenant from Sinai through that wilderness with us and actualize our mission. Indeed, the high and energy of Sinai eventually fades away at which point, we have to somehow recreate the setting and thereby carry the inspiration onward so that we can thrive in the wilderness, Bamidbar. If we do so, we will make it through to that Promised Land.

May we all be Zocheh to capture the inspiration as it comes, carry it over into our lives, concretizing it into true dedication to our mission of Avodas Hashem and ultimately fulfill that mission to the best of our abilities so that we may experience the arrival of the Geulah with the coming of Moshiach, Bimheirah Biyomeinu! Have a Great Shabbos and Shavuos!