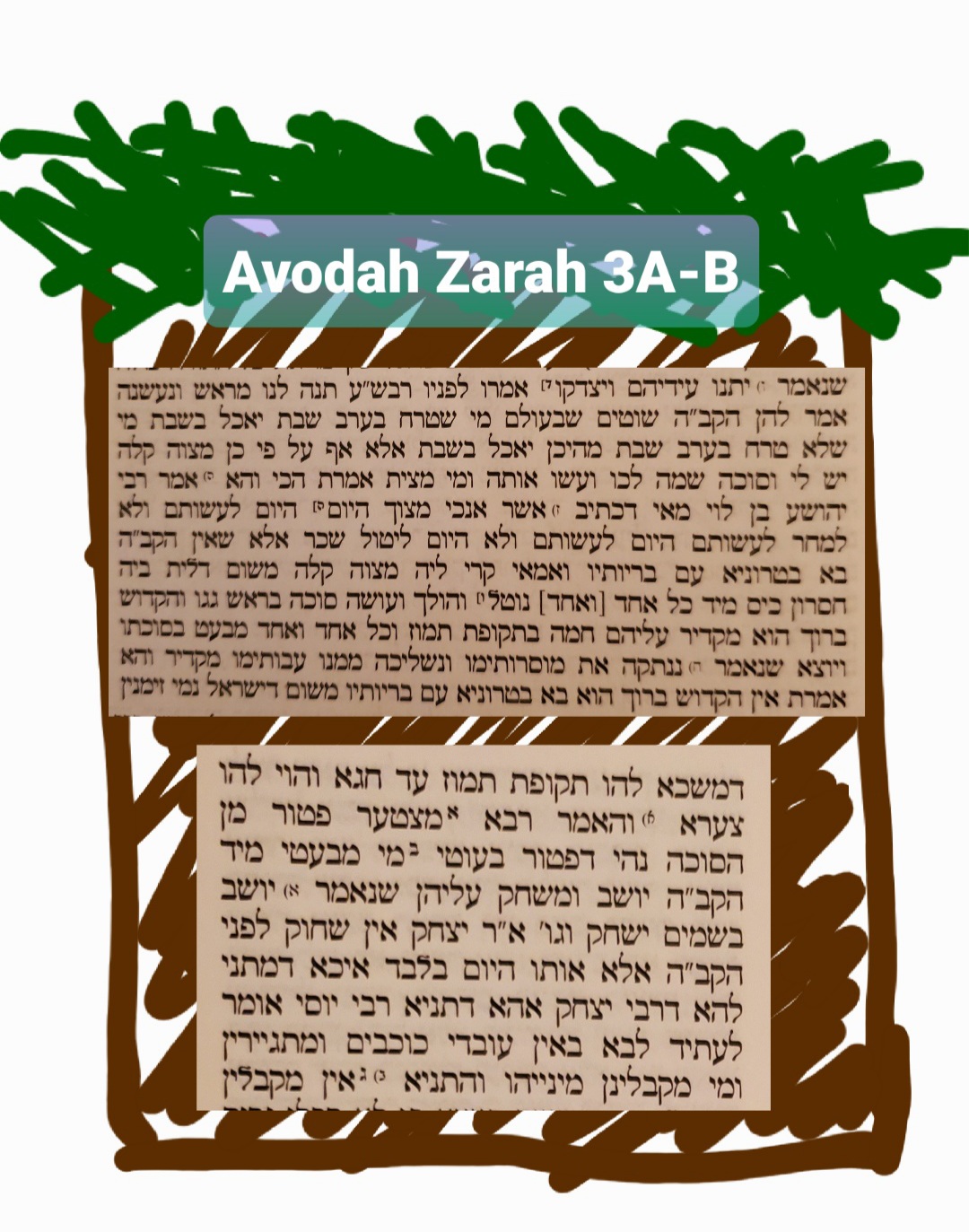 “The Pained are Patur”

The Gemara in Avodah Zarah records a lengthy, Aggadic account from the future, when the nations of the world will attempt to collect eternal reward despite a lack of merit earned during their time in “This World.”1 The nations fail to defend their appeal for any reward considering that they not only did not fulfill Hashem’s Torah, but they did not even uphold the basic Noachide Laws.

Nonetheless, upon their request for another chance to accept the Torah, G-d would grace them with one last chance in the form of one “simple Mitzvah.” That Mitzvah is none other than that of Succah. In response to this offer, the nations would dwell in Succos up until Hashem released the burning hot sun, causing the people to exit the Succos and kick them on the way out for good measure. In response, the Gemara relates, that G-d would merely “laugh,” jeering, as it were, citing a verse in support.2

The Gemara apparently anticipates most of the expected questions. For example, why would G-d pull a “fast one” against His Creations, using the sun to chase the nations away from the Mitzvah? The Gemara’s simple defense was that the shining of the sun was not a strict measure reserved for the nations, but a natural occurrence that is commonly experienced by even the B’nei Yisrael during the Succos season.

More fundamentally, the Gemara challenges how G-d could hold the nations responsible for exiting the Succos if a basic rule of Succah is that “Mitzta’eir Patur Min HaSuccah”-“The pained are exempt from Succah.”3 The Gemara’s counter to this question is quite simple and compelling: Of course the people were exempt, but they didn’t have to kick the Succos.

However, there are a couple of basic questions which the Gemara does not address.

For example, why does G-d choose the Mitzvah of Succah? Obviously, Hashem could have selected anyone of the six hundred thirteen Mitzvos. The choice of Succah needs explanation.

Moreover, why would Hashem choose a Mitzvah that could be naturally circumvented by technical exemptions? Granted, the nations of the world seal their own fate by kicking the Succos, but what is the point of situating the nations in a condition that would disable them from fulfilling this “last chance” Mitzvah? The Gemara already argued that G-d does not con His Creations. But, if that is the case, what did He have in mind here?

Maharsha addresses the former question explaining that G-d selected the Mitzvah of Succah to allude to the fact that, indeed, the nations of the world had missed the point of life in This World. The temporary dwelling represents the transient world whose sole purpose is to enable its inhabitants to earn eternal reward in the permanent and eternal World to Come. The nations’ request for a second chance only reveals that they didn’t take advantage of This World.

If this is true, might one suggest that G-d doesn’t intend for the people to fulfill the Mitzvah of Succah and receive any reward, and that this “last chance” is really just to teach the people a lesson? Perhaps we should not go that far. After all, G-d does not con His Creations. If He wants to teach them a lesson, it would have to be to some productive end. And maybe, in fact, G-d chooses Succah to demonstrate His kindness to the nations—that He would go beyond the letter of the law, giving them a second a chance. But, if that is true, why would G-d effectively “exempt” the people from the Mitzvah? If He was going to exempt them anyway, what was the point of this “last chance”? What was it supposed to prove? Was it some sort of scheme after all?

A Second Chance for What?

In order to understand the nature of the nations’ second chance, we need to explain Hashem’s allowance of this second chance. Why in fact does G-d allow this second chance? After all, the Gemara itself argues on the basis of Scripture that “today”4—in “This World” alone—one can earn reward, and not “tomorrow,” in the “World to Come.” Granted, G-d is merciful and kind. But, how could He justify this blatant violation of His own Torah?

However, what if this “second chance” was never intended as a chance to derive reward for the performance of a Mitzvah? If it wasn’t that, then what was this a second chance for?

If we meditate on what it is that, the Gemara relates, will seal the eternal fate of the nations, we will be on our way. Remember that the Gemara wholly defends the nations’ departure from their Succos. Due to the unbearable heat, they were legally exempt. But, the reason that they would be denied any credit at all is that they would kick the Succos on the way out. That is the critical and most telling moment.

Earlier, the Gemara reported that the nations would defend their self-professed rights to potential merit on the basis that, unlike the B’nei Yisrael, they were not subject to Hashem’s “coercion” at Har Sinai and compelled to keep the Torah. They would argue further that given the opportunity, they would jump at the opportunity to receive the Torah anew. However, as we pointed out, for G-d to simply concede and afford them this “second chance” would be in violation of the Torah which apparently states that reward for Mitzvos cannot be earned after the fact, in the Next World. And perhaps, that was the method to Hashem’s selection of Succah.

Perhaps there is technically no way for the nations of the world to earn reward for the fulfillment of a Mitzvah in the Next World. But, maybe, they could possibly be rewarded for their genuine and earnest desire to fulfill the Mitzvos, even when external conditions would render them unable to do so. After all, that is the claim they make—that they have a desire to accept the Torah and fulfill the Mitzvos. But, how could that claim be tested if, technically, they no longer could observe the Mitzvos? Thus, by offering them Succah and then exempting the nations from the Mitzvah, Hashem enables the nations to display that sincere remorse and yearning to fulfill the Mitzvah even though they practically could not. If they were truly pained—not just by the heat, but by the lost opportunity to fulfill a Mitzvah, it would show and their claim would be supported. But, of course, the nations’ actual reaction to their exemption says it all. They have no yearning for Hashem’s Mitzvos themselves, but for reward. It looks like they will be getting neither.

The attitude one displays for Hashem’s Mitzvos is not just the basis for the indictment of the nations of the world, but it is the tell-all measure of what it means to be a Jew. The proof lies with the very “first Jew.”

Avraham Avinu started off as an ordinary Noachide or gentile. But, unlike any other, he was the first to strive for more. Hashem set him apart from the Noachides of the world when He allowed Avraham to enter into the Bris Milah, the physical mark of the Jew and the spiritual beginning of the life of a Ben Yisrael. And it was immediately after the forging of that covenant of “Jewish-ness” that Avraham’s attitude for Mitzvos became apparent to all.

The Torah relates that Avraham Avinu sat at the entrance of his tent, “at the heat of the day”5 in the scorching sun. Sound familiar? Chazal teach that Avraham Avinu, three days removed from his Bris Milah, was ill, so Hashem “removed the sun from its sheath” to spare him from the burden of hosting wayfarers.6

Avraham Avinu was clearly “exempt” from Mitzvah of Hachnasas Orchim (hospitality). We might also call him the ultimate “Mitzta’eir”-“pained one.” And, indeed, Rashi7 precisely refers to Avraham as a “Mitzta’eir,” but not for the reason you might think. In fact, Rashi describes that Avraham was “Mitzta’eir,” not because of his physical pain from his circumcision, nor due to the discomfort of the scorching sun, but because there were no wayfarers to bring into his home. He was pained because he would not be able to perform and fulfill a Mitzvah.

If the sun wasn’t emitting so much heat, the parallels and contrast to the nations of the world would be chilling. And they don’t even end there. The Gemara in Rosh HaShannah reveals that this scene featuring Avraham Avinu at the entrance of his tent took place on none other than the holiday of Succos.8

The Exempt are Pained

Succos does not only offer us another Mitzvah opportunity, but it offers a precise measure for our attitude toward Mitzvos. As is demonstrated by the Aggadah in Avodah Zarah and by the basic Halachah, exemptions from the Mitzvah of Succah are common. How we observe Succos, in this way, might remain in G-d’s hands. He may exempt us. But, how we relate to that exemption will reveal everything.

The Mishnah likens a downpour of rain on Succos to a slave who pours a cup of water for his master only to get that cup spilled back in his face.9 It is clear how we are supposed to feel when we are technically “exempt.” Are we happy or relieved to receive that gesture of rejection? Although we have the opportunity to answer this question on Succos, we encounter this question daily. In this vein, perhaps, instead of rejoicing at the exemption from reciting the extended Tachanun—perhaps we can recognize the lost opportunity of extra communication with Hashem.

Although it is a legal truth that “Mitzta’eir Patur Min HaSuccah”-“the pained are exempt from Succah,” if we aspire to be like Avraham Avinu with our Jewish hearts in the right place, then the reverse will be true, that the exempt will be pained. Like the nations of the world, every exemption is another test, another “chance” to demonstrate our attitude towards Hashem’s Mitzvos. As is demonstrated by the Gemara in Avodah Zarah, attitude towards Mitzvos can apparently change the conversation of merit in the World to Come. Even in the face of exemption, we have the potential to earn eternal reward. Of course, our sincerest reactions to all exemptions will say it all.

May we all be Zocheh to have the right attitude—a sincere love and yearning for Hashem’s Mitzvos, and Hashem should respond to the attitude in kind, in the face of those who share the attitude of the nations of the world, with the coming of Moshiach, Bimheirah Biyomeinu! Have a wonderful Shabbos/Succos and a Chag Samei’ach!