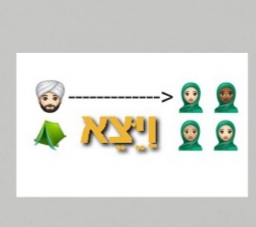 Parshas Vayeitzei marks the apparent formation of Klal Yisrael as Yaakov Avinu leaves home, marries, and begins to beget the progenitors of the Twelve Tribes of Israel.

Yaakov Finally “in the Parsha”

What is interesting to note is that it was not until this point in Yaakov’s life that the prospect of his eventual marriage was even a topic of discussion. The first mention of such an idea appears at the tail end of Parshas Toldos when Yitzchak Avinu commands him, at the behest of his wife Rivkah Imeinu, to leave home and find a wife.

All of the above might make one wonder what took Yaakov so long to begin his search for a wife. The wicked Eisav seemed to understand that it was an appropriate pursuit to marry, granted he married when he did as facade to humor and fool his father. So, why didn’t Yaakov endeavor to do the same for the sake of heaven? Why did his marriage(s) have to wait until Parshas Vayeitzei?

Unlike Eisav who preemptively pursued marriage, Yaakov waited for the go-ahead from his father, something which, ironically, most of us might have said is telltale sign of someone who is not ready for marriage. Why, in fact, did he have to wait for father’s signal?

Perhaps one can suggest quite reasonably that, as the Torah presents him, Yaakov was an “Ish Tam Yosheiv Ohalim”-“A innocent (alt., wholesome, simple) man dwelling in tents” [Bereishis 25:27]. He was content to remain in his tents of Torah study and was not bothered by anything happening in the world outside those tents. Marriage was a value that he would eventually arrive at, but he wasn’t quite there yet.

Now, it could be that Yaakov’s choice to live a long life a solitude was not just a personal preference, but his spiritual calling at the time, such that until receiving any signal otherwise, it was his job to remain solo in his tents. Perhaps this issue was actually a matter of debate. A debate between whom? Perhaps his own parents.

In fact, it could be that Yaakov was not supposed to leave his tent to search for a wife. Indeed, his own father Yitzchak as well did not leave home for that purpose. Granted, Yitzchak got married at age forty, but perhaps age is but a number. Perhaps Yaakov was supposed to follow Yitzchak’s more fundamental model of spiritual isolation and his wife would eventually be brought to him. Perhaps, for this reason, he could not leave home without Yitzchak’s signal because, indeed, for all he knew, he was not supposed to leave at all. Perhaps, that was Yitzchak’s plan for him.

But, of course, such plan would not hold. Yitzchak would in fact send him forth to leave the tent, go out into the world and get married. What changed? Perhaps, Yitzchak’s mind, after Rivkah’s plan was carried out. Although, Eisav was originally the designated  “man of the field,” to serve Hashen in the material world, alongside Yaakov’s spiritual service from the tents, he failed to the worldly ambassador for the Abrahamic mission of monotheism. Rivkah knew that Yaakov needed to move forward with the dual mission of both his own and of Eisav. He needed to be a wholesome man of the tents while serving Hashem in the fields.

And perhaps, Yitzchak was not convinced that Yaakov could survive in the real world… until after the scheme, when Yaakov demonstrated that he could hold his own. And once Yitzchak conceded and gave him the go-ahead, Yaakov indeed went ahead.

In the end, this is the dual mission we all must confront. How we balance that mission is a question for generations. There may be more than one answer, but that is the challenge. We need time of spiritual shelter and we need a sense of worldly independence. We need Torah, but we need to build a family and source of livelihood for that family. And we need each thing in its time.

May we all be Zocheh to succeed at serving Hashem in spirituality and physicality, and merit not only the blessings of Torah and family, each in its time, but we should be Zocheh to the Geulah and the coming of Moshiach, Bimheirah BiYomeinu! Have a Great Shabbos!
-Yehoshua Shmuel Eisenberg